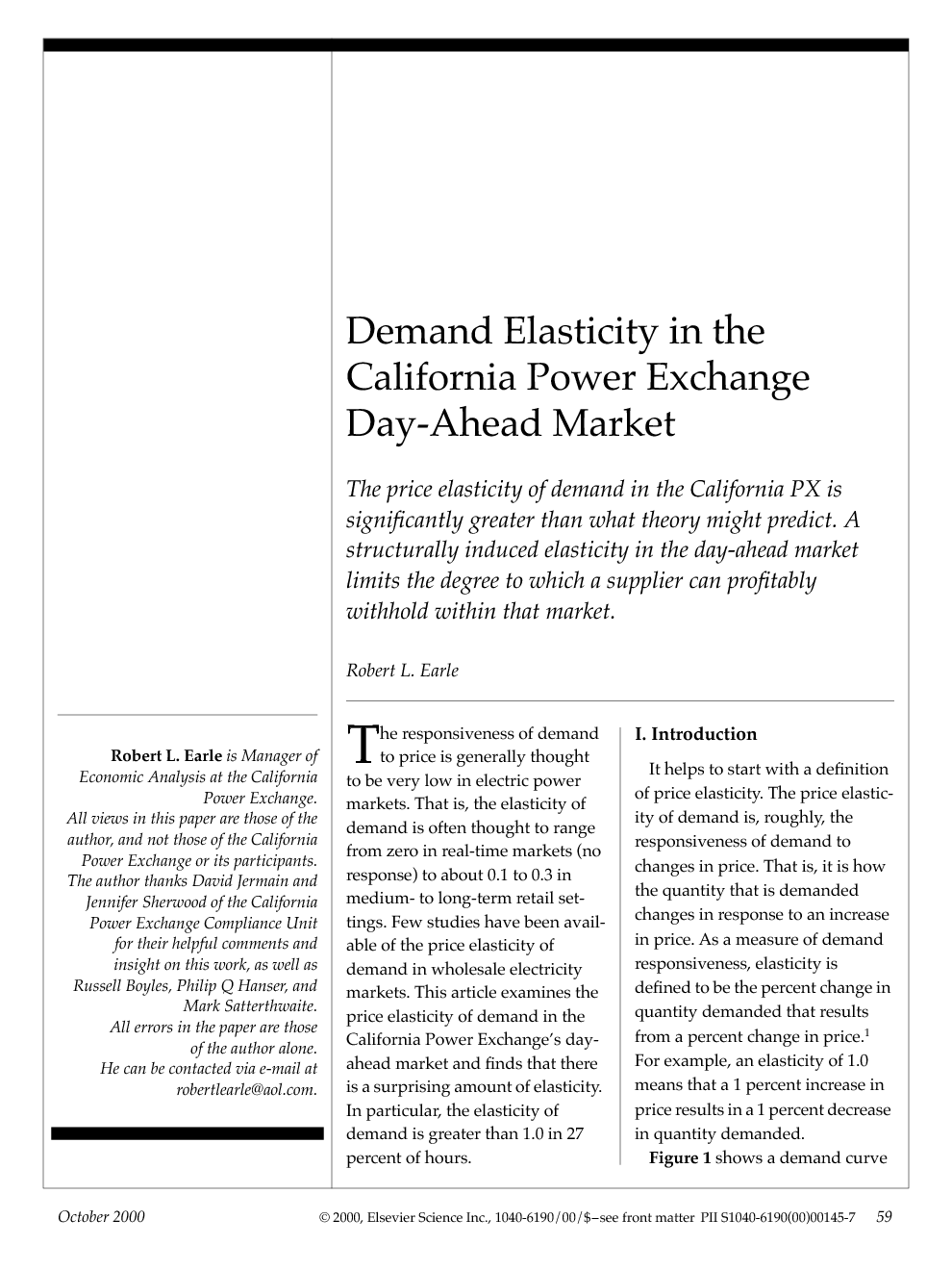 It helps to start with a definition of price elasticity. The price elasticity of demand is, roughly, the responsiveness of demand to changes in price. That is, it is how the quantity that is demanded changes in response to an increase in price. As a measure of demand responsiveness, elasticity is defined to be the percent change in quantity demanded that results from a percent change in price.1 For example, an elasticity of 1.0 means that a 1 percent increase in price results in a 1 percent decrease in quantity demanded. Figure 1 shows a demand curve with an elasticity of 1.0 for every quantity level. Note that even though the slope is different at different levels of demand, the elasticity is the same. This is because elasticity is defined as the percentage change in quantity per percent change in price, not the change in absolute level. So, the slope in Figure 1 is greater at lower demand levels than it is at higher levels. Full-size image (3 K) Figure 1. Demand Curve with Elasticity of One for All Quantity Levels Figure options Elasticities over 1.0 mean that when the price rises 1 percent, the quantity demanded decreases by more than 1 percent. For example, if the elasticity is 2.0, an increase in price of 1 percent implies a 2 percent decrease in quantity demanded. Conversely, elasticities under 1.0 mean that for a 1 percent increase in price, quantity decreases by less than 1 percent. Table 1 summarizes the situation. Table 1. Relationship of Elasticity Level to Change in Quantity Given a Change in Price Elasticity Change in Quantity Less than one Decrease more than change in price; inelastic One Decrease equal to change in price Greater than one Decreases greater than change in price; elastic Table options An elasticity of zero means that the demand curve is a vertical line, as illustrated in Figure 2. Real-time demand for electricity is often considered to have zero elasticity, and some modelers of electricity markets use a zero elasticity of demand.2 In this situation, no matter what the price, demand is the same. Full-size image (2 K) Figure 2. Demand Elasticity of Zero Figure options The importance of demand elasticity is the ability of the market to respond to price signals. When demand is inelastic, the market is less able to respond to price signals. When demand is more elastic, it is better able to respond to price signals. Moreover, the ability of a producer to profit by raising prices is limited by the elasticity of demand. When demand is inelastic (less than 1.0), a producer can profit by raising prices, since the percent decrease in demand is less than the percent increase in price. On the other hand, when demand is elastic (more than 1.0), if a producer raises its price, it loses more in volume than it gains from the price hike. Because of the still-low market penetration of real-time meters,3 the ability of end-use consumers to respond to price signals is very limited. As a result, real-time demand for electricity is often considered to have an elasticity of zero. It is unable to respond to price signals. Most studies of the elasticity of demand for electric power have elasticities in the range of 0.05 to 0.9. The length of the response time varies from study to study. In general, the shorter-term estimates had much smaller elasticities (below 0.3); moreover, many of the studies examined were based on data from real-time pricing experiments.4 while it is clear that the retail, end-user demand for electric power remains very inelastic, there appears to be significant elasticity in the day-ahead market of the California Power Exchange (PX). This elasticity might be “structurally induced,” due to the fact that the market in California really consists of a series of markets. Multiple opportunities to buy and sell power could allow buyers to be more elastic in the forward day-ahead market than they are in real-time. Before exploring this idea further, this article briefly explains the structure of the California electricity markets, discusses the methodology for measuring elasticity in the day-ahead market, and presents the results of the study.

The price elasticity of demand in the California Power Exchange is significantly greater than what theory might predict. In the first 20 months of operation, demand has been elastic (over 1.0) for 27 percent of the time. This demand responsiveness occurs throughout all hours and levels of quantities cleared. The percentage of hours of elastic demand decreases somewhat with increasing prices, but is still high (15 percent) at high price levels of over $40/MWh. Because there is a series of markets in which to participate, buyers may shape their demand curves based on their expectations of prices in the subsequent markets. Even though their final, end-use demand is inelastic, they might still rationally submit elastic bid curves for the preceding markets. This structurally induced elasticity in the day-ahead market limits the degree to which a supplier can profitably withhold within that market. ■ 1 For ease of exposition, this article defines the price elasticity of demand to be positive. That is, it is the percent decrease in quantity demanded per percent increase in price or, ϵ = − (dq/dp)(p/q). 2 See, for example, Aleksandr Rudkevich, Max Duckworth, and Richard Rosen, Modeling Electricity Pricing in a Deregulated Generation Industry: The Potential for Oligopoly Pricing in a Poolco, 19 Energy J., 1998, at 1–-48. 3 See Denise Worhach, AMR Outlook: The Analysts' View, Pub. Util. Fortnightly, (AMR Supplement 2000), May 2000, at 37–42. 4 Douglas W. Caves and Laurits R. Christensen, Econometric Analysis of Residential Time-of-Use Electricity Pricing Experiments, 14 J. Econometrics, 1980, at 287–307; Ronald Gallant and Roger W. Koenker, Cost and Benefits of Peak-Load Pricing: A Continuous Time Econometric Approach, 26 J. Econometrics, 1984, at 83–113; Joseph A. Herriges, S.M. Baladi, Douglas W. Caves, and B.F. Neenan, The Response of Industrial Customers to Electric Rates Based Upon Dynamic Marginal Costs, Rev. Econ. & Stat., 1993, at 446–54; Edward Rolla Park and Jan Paul Acton, Large Business Customer Response to Time-of-Day Electricity Rates, 26 J. Econometrics, 1984, at 229–52; Thomas N. Taylor and Peter M. Schwartz, The Long-Run Effects of a Time-of-use Demand Charge, 21 Rand J. Econ., 1990, at 431–45; and Kenneth Train and Gil Mehrez, Optional Time-of-Use Prices for Electricity: Econometric Analysis of Surplus and Pareto Impacts, 25 Rand J. Econ., 1994, at 263–83. 5 Note that it does not really matter whether the demand is correlated with the real-time prices or not. Whether “oligopsony” power exists or not does not affect the results. For this example we assume that the participant cannot exercise market power. 6 The buyer's expected demand at the time of the day-ahead market will be (0.5)(0) + (0.5)(100) = 50. 7 With a strategy to always purchase some fixed amount in real-time, the total expected cost turns out in this case to always be $1,000. 8 The arc elasticity of demand in this case is 3. Arc elasticities use average prices and quantities. 9 For the purposes of this discussion, many of the details of the bids have been left out of this article. 10 The first several months of the market had many hours of elastic demand; however, this slight clumping does not really effect the results. 11 A constant elasticity of demand function can be specified as Q = yp−ϵ, where Q is the market demand, p is the market clearing price, and ϵ is a constant, the price elasticity of demand. The parameter y anchors the curves so that they are comparable in some sense. Picking some point , where the demand curve is thought to go through, derives it. In the figure it is where the various demand curves intersect. 12 B. Allaz and J.L. Vila, Cournot Competition, Forward Markets, and Efficiency, 59 J. Econ. Theory, 1993, at 1–16. 13 John S. Hughes and Jennifer L. Kao, Strategic Forward Contracting and Observability, 16 Int'l J. Indus. Org., 1997, at 121–33.