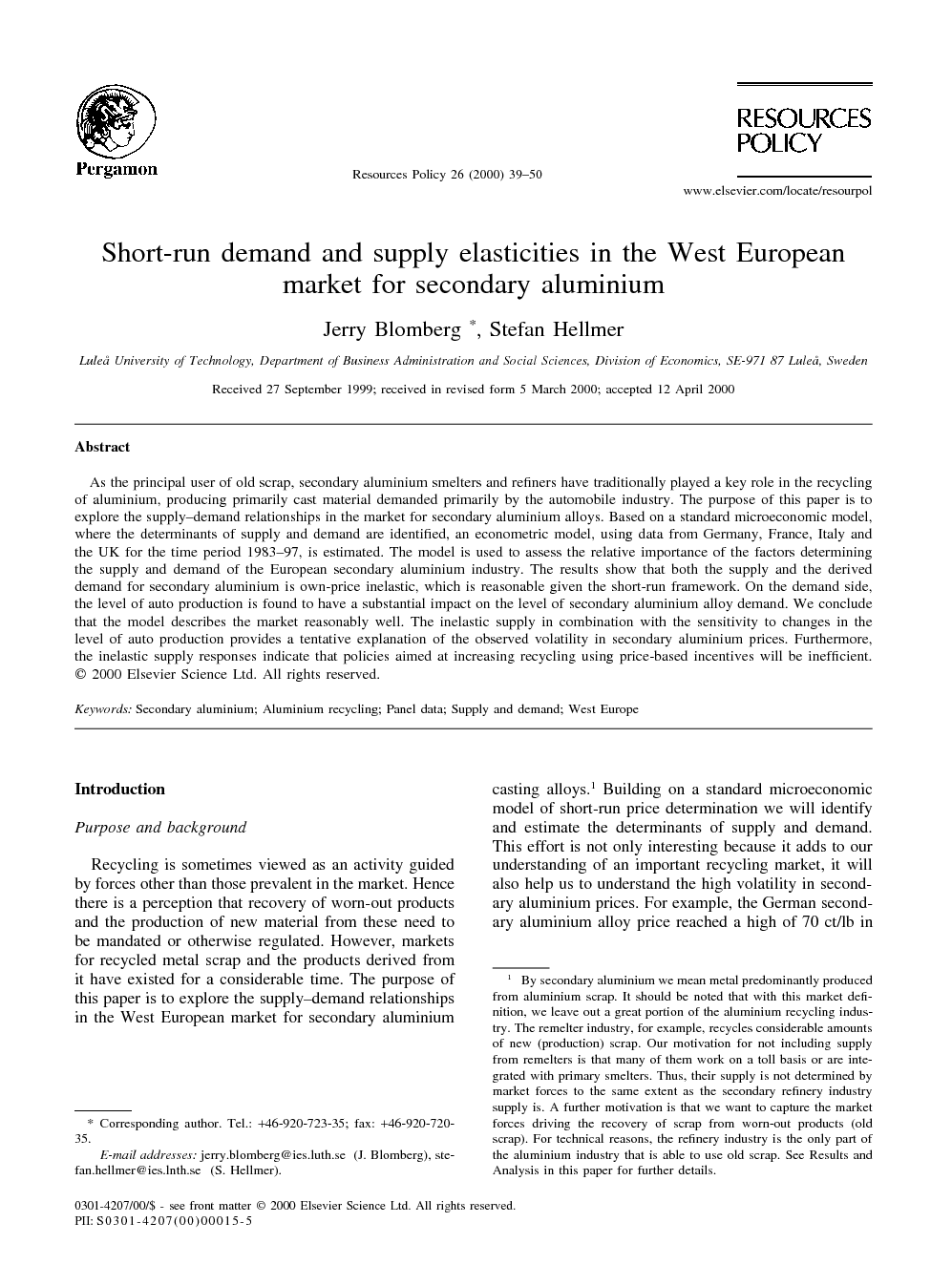 As the principal user of old scrap, secondary aluminium smelters and refiners have traditionally played a key role in the recycling of aluminium, producing primarily cast material demanded primarily by the automobile industry. The purpose of this paper is to explore the supply–demand relationships in the market for secondary aluminium alloys. Based on a standard microeconomic model, where the determinants of supply and demand are identified, an econometric model, using data from Germany, France, Italy and the UK for the time period 1983–97, is estimated. The model is used to assess the relative importance of the factors determining the supply and demand of the European secondary aluminium industry. The results show that both the supply and the derived demand for secondary aluminium is own-price inelastic, which is reasonable given the short-run framework. On the demand side, the level of auto production is found to have a substantial impact on the level of secondary aluminium alloy demand. We conclude that the model describes the market reasonably well. The inelastic supply in combination with the sensitivity to changes in the level of auto production provides a tentative explanation of the observed volatility in secondary aluminium prices. Furthermore, the inelastic supply responses indicate that policies aimed at increasing recycling using price-based incentives will be inefficient.

Recycling is sometimes viewed as an activity guided by forces other than those prevalent in the market. Hence there is a perception that recovery of worn-out products and the production of new material from these need to be mandated or otherwise regulated. However, markets for recycled metal scrap and the products derived from it have existed for a considerable time. The purpose of this paper is to explore the supply–demand relationships in the West European market for secondary aluminium casting alloys.1 Building on a standard microeconomic model of short-run price determination we will identify and estimate the determinants of supply and demand. This effort is not only interesting because it adds to our understanding of an important recycling market, it will also help us to understand the high volatility in secondary aluminium prices. For example, the German secondary aluminium alloy price reached a high of 70 ct/lb in real terms both in 1984 and 1989 and a low of 30 ct/lb in 1994. Such swings in price might have detrimental effects on the willingness to undertake long-term investment in the industry, with possible negative ramifications for recycling. Recycling of aluminium has been undertaken since the metal started to be used in the late-nineteenth century, primarily due to the high value of the scrap because of the energy-saving potential when manufacturing metal from aluminium scrap instead of bauxite. However, only in the 1980s and 1990s has aluminium recycling entered the public consciousness. Today, municipal recycling centers for used beverage cans are more or less common throughout the western world, as is the recycling of almost all aluminium metal from end-of-life vehicles. Aluminium is the world's most used non-ferrous metal, with annual world consumption twice as high as copper (aluminium is second only to iron and steel). Its prominent role in public discussion is not misplaced. In Western Europe, recycling of aluminium scrap and the production of secondary metal from it has taken on even more prominence since European primary production started to level off and finally decline during the 1980s and 1990s. As is evident from Table 1, the relative growth of the secondary refinery industry has been almost one and a half times as rapid as the growth in the primary sector, partly due to the high energy cost of the latter. Table 2 indicates the great importance of the secondary refinery industry for some major European countries. The relative size of the two industries has varied over the last 30 years, but since the beginning of the 1980s the secondary industry has grown consistently in importance and is now, in the case of Italy, more than twice the size of the primary industry. Even if total consumption of aluminium over time has often outgrown any domestic supply in most European countries, secondary aluminium has held its position reasonably well. In 1997, secondary aluminium comprised approximately one-fifth to almost one-third of total consumption. Table 1. Production and consumption of aluminium in Europe in 1970–97 (thousand tons) Year Production of secondary aluminium Production of primary aluminium Total consumption 1970 800.5 2015.1 3347.8 1980 1183.5 3759 5048.6 1990 1712.1 3927.4 6907.3 1997 1851.4 3299.5a 7900.2a Source: Metal Statistics and Organisation of European Aluminium Refiners and Remelters (OEA). a 1995. Table options Table 2. Domestic secondary aluminium production 1997 (relative shares) Country Domestic secondary production/Domestic primary production Domestic secondary production/Total domestic consumption Germany 0.76 0.18 France 0.61 0.25 Italy 2.36 0.29 United Kingdom 0.96 0.31 Source: Metal Statistics and Organisation of European Aluminium Refiners and Remelters (OEA). Table options Given the growing importance of secondary aluminium both in terms of European “domestic” production and in terms of the growing share of consumption, we believe there is a need to better understand how the market for secondary alloys functions.

In this paper we set out to identify the different factors determining supply and demand of secondary aluminium alloys in the short run. Using data from Germany, France, Italy and the UK for the time period 1983–97, the relative importance of the identified factors were then assessed. Our simple model, we conclude, fits quite well in describing the market for secondary aluminium alloys, as could be seen from the relatively high R2 values in Table 4 (with the caveat mentioned above considering the possibility of excluded variable bias). The results imply both inelastic demand and supply behavior, which is fairly reasonable considering that we are dealing only with short-run changes. The type of industry that secondary refineries represent, with fairly high capital intensity, makes short-run adjustment of supply difficult. Also, secondary supply is insensitive to changes in input prices. For example, due to commitments to its customers, cost increases due to higher scrap prices have little effect on secondary supply from the refineries, at least in the short run. Furthermore, our results indicate a relatively high responsiveness in some of the exogenous variables, such as auto production and capacity. As an effect of the low price elasticities, we have shown that the effect on equilibrium price from a change in automobile production is relatively significant (a 1 percent increase in automobile production tends to increase the secondary aluminium price by approximately 3 percent). This seems to be in line with the high volatility in secondary alloy prices. Firm conclusions about proper policies, for example how increased aluminium recycling should best be stimulated (if we believe such a goal is socially worthwhile), are hard to draw, considering our model is only for the short run. However, our results, albeit tentative, indicate that policies aimed at increasing aluminium recycling by manipulating price (for example, subsidies aimed at increasing the price received by secondary refineries) will be inefficient considering the low own-price elasticity of secondary supply. Policies aimed at decreasing the cost of recycling, for example by making scrap cheaper (for example, by public investment in better scrap collection and pretreatment infrastructure, or by demands on products to be designed for recyclability), will also run the risk of not getting the job done, as the low supply response to changes in scrap prices indicates. Policies not directly aimed at recycling might turn out to do better. For example, a speculative suggestion is that increased public and private demands for better fuel efficiency and safety in cars might potentially increase the demand for materials, such as aluminium, with a favorable strength to weight ratio. Considering the already strong position of secondary aluminium within the transport sector of the economy, deeper penetration and increased demand of secondary aluminium is thus a possibility. This, however, hinges on the secondary refinery industry competitive position vis-à-vis the primary aluminium industry and other materials. Further research is needed to fully understand the secondary aluminium alloy market. First, some measure of the excluded, but theoretically motivated, variables would increase the precision of the estimated coefficients. Second, the model should be expanded to a long-run format to gain a better understanding of market behavior. This would, for example, include capital prices and a more explicit treatment of the end-use structure of aluminium and its influence on the accumulation of scrap. Thus, a measure of the availability of scrap should be developed. Also, some measure of technology developments in the industry would be preferred. The effects on West European secondary aluminium production from trade in both scrap and secondary aluminium alloys should, perhaps, also be included in an extended model.