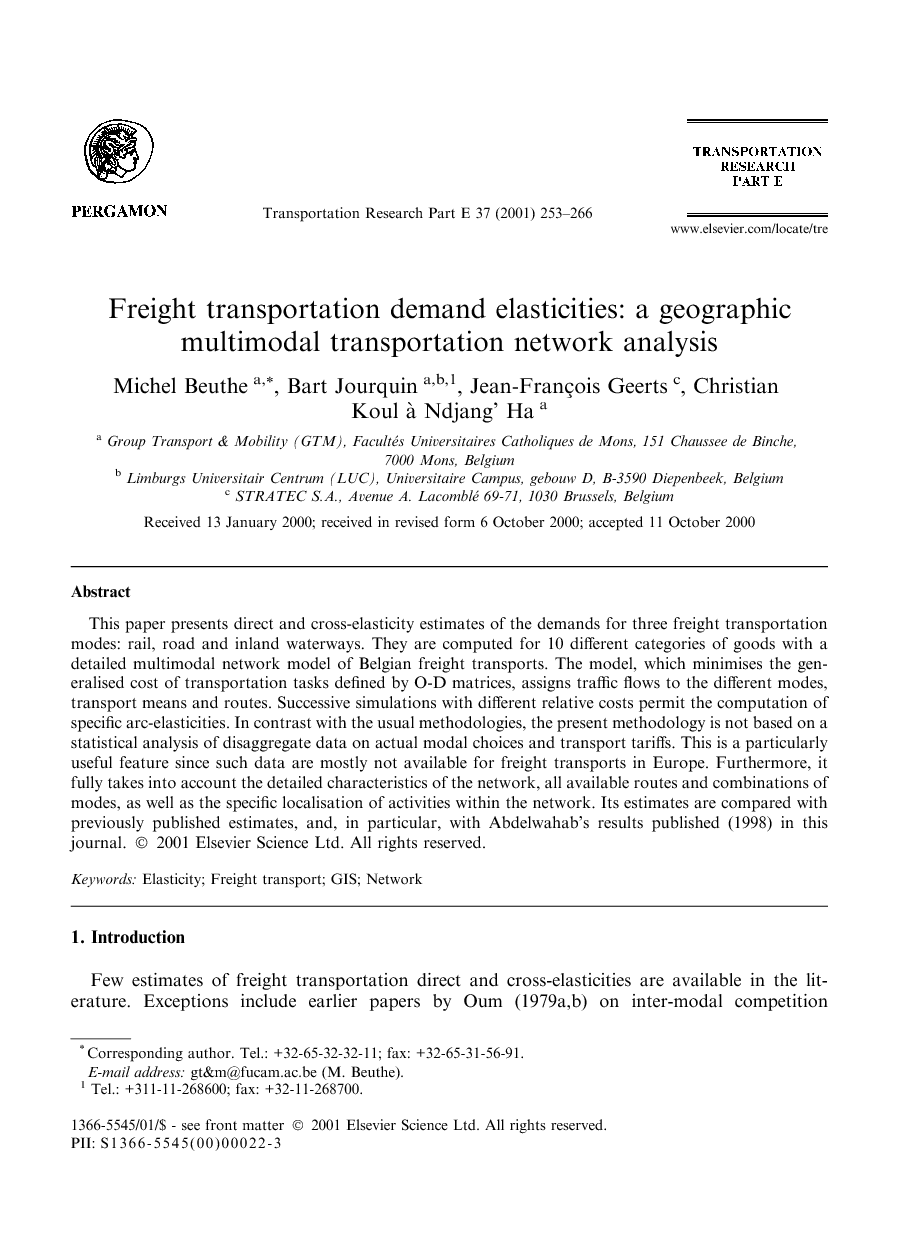 This paper presents direct and cross-elasticity estimates of the demands for three freight transportation modes: rail, road and inland waterways. They are computed for 10 different categories of goods with a detailed multimodal network model of Belgian freight transports. The model, which minimises the generalised cost of transportation tasks defined by O-D matrices, assigns traffic flows to the different modes, transport means and routes. Successive simulations with different relative costs permit the computation of specific arc-elasticities. In contrast with the usual methodologies, the present methodology is not based on a statistical analysis of disaggregate data on actual modal choices and transport tariffs. This is a particularly useful feature since such data are mostly not available for freight transports in Europe. Furthermore, it fully takes into account the detailed characteristics of the network, all available routes and combinations of modes, as well as the specific localisation of activities within the network. Its estimates are compared with previously published estimates, and, in particular, with Abdelwahab's results published (1998) in this journal.

Few estimates of freight transportation direct and cross-elasticities are available in the literature. Exceptions include earlier papers by Oum, 1979a and Oum, 1979b on inter-modal competition between rail, road and inland waterway in Canada. Moreover, freight transportation price elasticities are rarely estimated separately for different market segments, i.e., different categories of goods, and, they do not explicitly take into account the spatial characteristics of the geographic network, such as a convenient accessibility to a waterway or a rail track at some locations. A notable exception is the recent paper by Abdelwahab (1998) which analyses the rail and road transport demands for different categories of goods and in different United States' regions. In this paper, we present estimates of direct and cross-elasticities for rail, road and waterway transports which are obtained with an entirely different methodology based on a detailed multimodal geographic information system (GIS) network model of freight transportation in Belgium. The model of the Belgian railway, waterway and road network, embedded within the European networks, was developed with the NODUS software2, which is based on a detailed analysis and comparison of the costs involved in each transport solution, mode, transport means (heavy and light trucks, type of boats, etc.) and route. Given the matrices of origins and destinations for ten different categories of goods, it minimises the generalised cost of the corresponding transportation tasks by an optimal assignment of the flows between modes, type of vehicles, or their combination, and routes. Simulations with different cost parameters allow then a thorough analysis of modal substitution and the generation of direct and cross arc-elasticities with respect to cost variations. Specific estimates are obtained for each category of goods. They fully take into account the detailed spatial characteristics of the network and the different localisations of activities for each group of commodity. In contrast with the usual statistical methodologies, the computation of these network elasticities is not based on a data analysis of actual modal choices and tariffs. In effect, such disaggregate data are mostly not available for every freight transport mode in Europe. The methodology rather assumes that shippers minimise their generalised cost of transportation, a commonly accepted hypothesis, and requires (only) aggregate matrices of origins and destinations plus detailed cost information on transport operations. Strictly speaking, they are generalised cost elasticities rather than price elasticities. Hence, they are somewhat unusual, and their assessment requires a good understanding of their particular character in comparison with the statistically derived behavioural elasticities. However, it will be shown that they share some characteristics with those estimated by Abdelwahab (1998). Thus, in Section 2, the paper starts with some methodological considerations. First, Section 2.1 compares network elasticities with the other more usual elasticities; then, Section 2.2 gives some basic elements of the multimodal transport mode and its cost functions. Section 3 explains how it was built up and calibrated over the Belgian network and gives some measures of its performance. Section 4 presents the elasticities obtained from a set of simulations and compares them mainly with the estimates obtained by Abdelwahab (1998). A global assessment of the results concludes the paper.

This paper has presented a complete set of conditional direct and cross-elasticities for road, rail and waterway freight transport and for 10 different groups of commodities. Also, separate elasticities have been estimated for short- and long-distance markets. They have been computed by means of a multimodal network model of freight flows and the minimisation of transport generalised costs. Compared with the results of other studies, the measured elasticities appear to be of the same order of magnitude as price-elasticities estimated by more classical statistical methods, like those obtained by Abdelwahab (1998). These results suggest that econometric behavioural estimates are mainly a reflection of shippers seeking least cost paths for freight transports. It is this hypothesis of transport cost minimisation used in our network analysis that allows us to compute modal elasticities without a statistical analysis of observed disaggregate data on actual modal choices and tariffs. This is a particularly useful feature of the methodology when such data are not available, as it is the case for freight transports in Belgium and in many European countries. On the other hand, this methodology requires the knowledge of O-D matrices and detailed cost information on transport operations. A wider range of estimates from one group of commodities to another (and actually from an O-D pair to another) seems to characterise this microscopic network approach. It should constitute a warning that the use of more global estimates in forecasting exercises may lead to mistaken assessments when applied to particular situations. As such, these elasticities appear as highly relevant to decision making in regional and industrial planning policy, even though they do not take account of any induced demand effect. Our approach also has some limitations. The model is still static, unable to measure long-run elasticities integrating the effects of induced demand and competitive responses, which would characterise a long-run equilibrium solution. Nor is it able to reach a solution spreading flows over several modes or routes given the capacity constraints. Part of the problem results from the lack of adequate information, but another part comes from the difficulty to compute equilibrium solutions over an extensive network. As of now, it can provide partial answers only to some of these problems by a procedure of ad hoc iterations. Our current research work aims at further developing this network model to enable it to handle these problems.