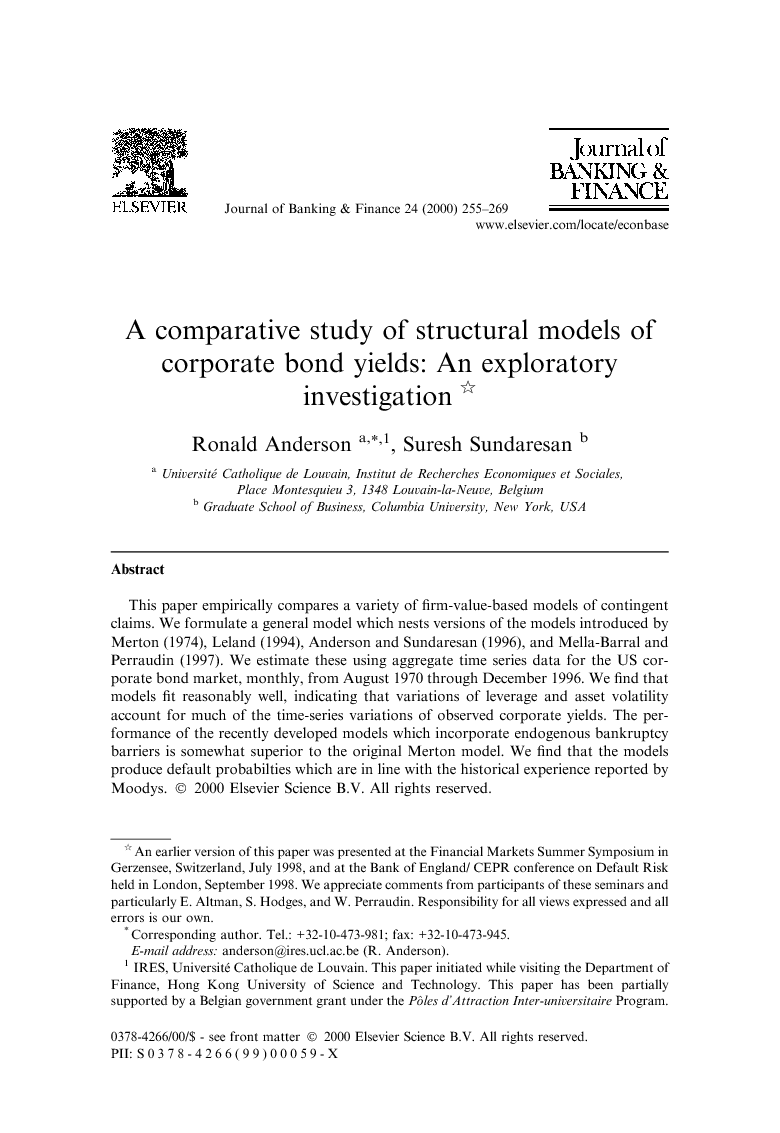 This paper empirically compares a variety of firm-value-based models of contingent claims. We formulate a general model which nests versions of the models introduced by Merton, 1974, Leland, 1994 and Anderson and Sundaresan, 1996, and Mella-Barral and Perraudin (1997). We estimate these using aggregate time series data for the US corporate bond market, monthly, from August 1970 through December 1996. We find that models fit reasonably well, indicating that variations of leverage and asset volatility account for much of the time-series variations of observed corporate yields. The performance of the recently developed models which incorporate endogenous bankruptcy barriers is somewhat superior to the original Merton model. We find that the models produce default probabilties which are in line with the historical experience reported by Moodys.

In this paper we estimate structural models of corporate bond yields using monthly observations of yield indices of US investment grade corporate bonds. Following the tradition established by Merton (1974) structural models of corporate bonds treat these as contingent claims on the assets of the firm. Variations in yield are explained by variations in leverage, asset value volatility, and the riskless interest rate. Structural models of the liabilities of the firm are attractive on theoretical grounds, as they link the valuation of financial claims to economic fundamentals. Further motivation for structural models of corporate liabilities is provided by past empirical work which has found that corporate yield spreads over government bonds is related to stock market returns and macroeconomic business cycle indicators (Jaffee, 1975; Duffee, 1998). Despite the appeal of structural models, they have proved difficult to implement successfully. One problem is that the theoretical models relate yields to fundamental determinants in a highly non-linear way. Furthermore, structural models have greater data requirements than other approaches. Past serious attempts to implement the Merton model on US corporate bonds proved disappointing Jones et al., 1984 and Jones et al., 1985. The models did not fit very well and tended to systematically underestimate observed yields when plausible values of asset volatility were employed. Nevertheless, simple structural models have been the basis of a number of tools used by practitioners in the evaluation of credit-risky instruments. The alternative approach of practitioners has been to infer fair yields from market yields of other traded instruments that are comparable with respect to rating and maturity. In the simplest application this gives rise to “matrix pricing” where the yield of a given issue is derived from a set of yields of traded benchmarks using ad hoc rules for interpolation. Recently a number of advances have been made which give a rigorous statistical basis for inferring issue yields from market benchmarks. Important studies of these so-called “reduced form” models of corporate yields include Litterman and Iben, 1991 and Jarrow and Turnbull, 1995 and Duffie and Singleton, 1997 and Duffie and Singleton, 1996. This approach introduces a variety of flexible functional forms giving the conditional probability of default. The results have been encouraging, and these reduced form models are useful in some practical applications. However, there are important limitations to this approach. A first issue is the abundance of possible functional forms which may be calibrated to a given set of benchmarks but which can imply significantly different values when pricing some other issue. Which model is to be believed? A second problem with reduced form models is that for many pricing problems there are no reliable benchmarks. In this case one would like to establish values from first principles. A third limitation of reduced form models is that they tend to ignore systematic risks in a bond portfolio. In fact, it is likely that default events of diverse firms are correlated and coincide with cyclical down-turns. For all of these reasons we feel there is a need for further empirical study of structural models of corporate bonds. An additional reason for undertaking this is that in recent years there has been renewed theoretical work in this area designed to address the limitations encountered with past contingent claims models. It has been recognized that the Merton model is unrealistic in modeling financial distress as an exogenously fixed absorbing barrier2. This short-coming has given rise to new models which determine the lower reorganization boundary of the model endogenously. One approach has been to introduce a game-theoretic model of the bankruptcy process and in this way address the determinants of deviations from absolute priority (see Anderson and Sundaresan, 1996, Anderson et al., 1996, Anderson et al., 1997 and Fan and Sundaresan, 1997). A closely related approach treats the liquidation decision as an option (see Mella-Barral and Perraudin, 1997). A third line of modeling follows Black and Cox (1976) in assuming that debt service is paid by issuing new equity; the endogenous bankruptcy point is the value of the firm such that the market price of equity drops to zero. (See Leland, 1994; Leland and Toft.) While there are similarities across models, their implications for pricing can differ significantly. To date there has been no attempt to discriminate among these models on empirical grounds. The purpose of the current study is to see to what extent these new models are able to account for broad time series variations in observed yields of defaultable bonds. Secondarily, it attempts to identify which of the models fits the data best. We formulate a general model which nests versions of the models introduced by Merton, 1974, Leland, 1994 and Anderson and Sundaresan, 1996, and Mella-Barral and Perraudin (1997). We estimate these using aggregate time series data for the US corporate bond market, monthly, from August 1970 to December 1996. Overall the results suggest that the recent efforts to modify the contingent claims model to allow for the endogenous determination of the default barrier based on economic fundamentals have led to an improvement of structural models. These models correlate with observed yield spreads more highly than does the Merton model. Furthermore, their parameter estimates are more plausible. We also find under plausible assumptions on the market risk-premium for levered firms that the models produce default probabilities for 5 years or more which are inline with the historical experience reported by Moody's. The remainder of the paper is organized as follows. In Section 2 we describe the data. Section 3 develops the general theoretical model and shows how known models from the literature are nested as special cases. Section 4 presents the empirical estimates. Section 5 is devoted to our conclusions.

Overall, these empirical results are fairly encouraging for the prospects of firm-value-based structural models for the pricing of corporate bonds. Much of the movements observed in historical times series of yields on generic corporate bonds can be accounted for in structural models using proxies for leverage and asset volatility. The results suggest that recent modifications of the contingent claims models to allow for endogenous default barriers have significantly improved the performance of the models. This study is exploratory in nature, and there are clearly many interesting areas for further empirical work. It will be interesting to extend the structural approach by the incorporation of a stochastic risk-free term structure in a model with endogenous bankruptcy barrier and by the more careful modeling of the liquidity premium. Furthermore, the application of endogenous bankruptcy barrier models to specific bond issues using firm measures of leverage and asset volatility would be very interesting.