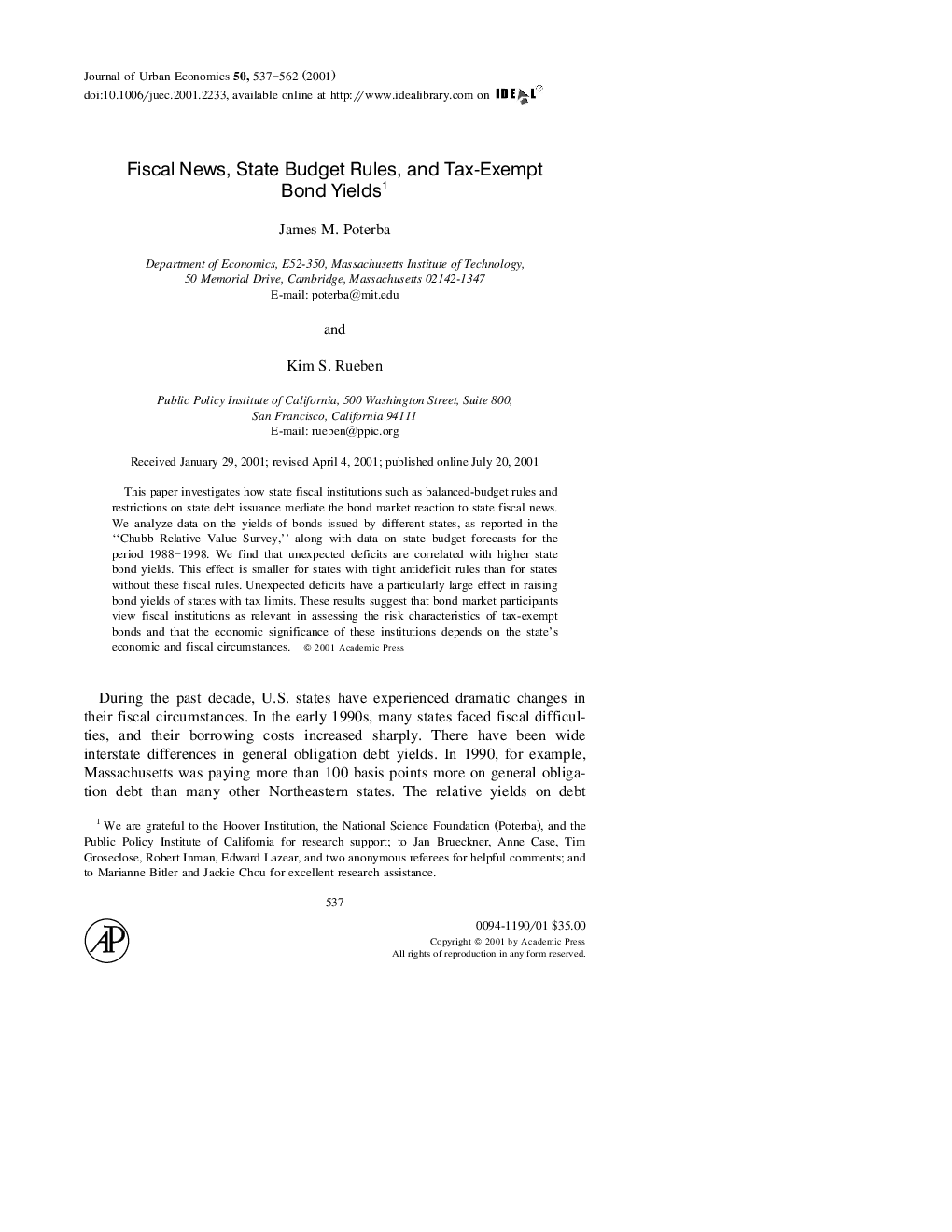 This paper investigates how state fiscal institutions such as balanced-budget rules and restrictions on state debt issuance mediate the bond market reaction to state fiscal news. We analyze data on the yields of bonds issued by different states, as reported in the “Chubb Relative Value Survey,” along with data on state budget forecasts for the period 1988–1998. We find that unexpected deficits are correlated with higher state bond yields. This effect is smaller for states with tight antideficit rules than for states without these fiscal rules. Unexpected deficits have a particularly large effect in raising bond yields of states with tax limits. These results suggest that bond market participants view fiscal institutions as relevant in assessing the risk characteristics of tax-exempt bonds and that the economic significance of these institutions depends on the state's economic and fiscal circumstances.

During the past decade, U.S. states have experienced dramatic changes in their fiscal circumstances. In the early 1990s, many states faced fiscal difficulties, and their borrowing costs increased sharply. There have been wide interstate differences in general obligation debt yields. In 1990, for example, Massachusetts was paying more than 100 basis points more on general obligation debt than many other Northeastern states. The relative yields on debt 1 We are grateful to the Hoover Institution, the National Science Foundation ŽPoterba., and the Public Policy Institute of California for research support; to Jan Brueckner, Anne Case, Tim Groseclose, Robert Inman, Edward Lazear, and two anonymous referees for helpful comments; and to Marianne Bitler and Jackie Chou for excellent research assistanceissued by California and New York have varied by nearly 60 basis points. The wide disparities in state borrowing costs reflect divergent economic conditions, but they may also reflect more systematic factors such as differences in state political institutions or fiscal constitutions. The effect of fiscal institutions on fiscal policy and economic performance more generally attracted substantial policy attention and academic research in the past decade. Discussions leading to the creation of the European Monetary Union, described for example in Von Hagen 28 and Inman 15, and U.S. fiscal experiences with federal budget deficits in the early 1990s were important stimuli to this work. An important issue in this literature is the extent to which credit markets evaluate the credit worthiness of sovereign borrowers, thereby indirectly providing a source of fiscal discipline. The notion that participants in sovereign debt markets form sophisticated views of the fiscal prospects for different jurisdictions offers an intriguing strategy for testing a range of hypotheses about the economic effects of fiscal limits. When jurisdictions differ in their fiscal rules, empirical research could in principle identify the effect of different provisions in the fiscal constitution on borrowing costs. Several previous studies, including Eichengreen 9, Goldstein and Woglom 13, Bay- oumi, Goldstein, and Woglom 4, Lowry and Alt 17, and Poterba and Rueben 24, have applied this strategy to the U.S. states. The results in this literature suggest that state fiscal institutions have some explanatory power for the level of borrowing costs. The potential endogeneity of state fiscal rules is an empirical challenge to any study of fiscal institutions and borrowing costs. It is possible that states with tight antideficit rules also have fiscally conservative electorates and that the primary factor explaining their lower borrowing costs is the electorate, not the fiscal rules. Previous efforts to find instrumental variables that are correlated with fiscal institutions, but not with fiscal policy and borrowing costs, have met with only limited success. This paper tackles the endogeneity problem by focusing on changes in state borrowing costs, rather than on the level of these costs. It considers the reaction of tax-exempt bond yields to news about state fiscal conditions, particularly unexpected state deficits and surpluses. The core of the empirical analysis is a study of how state fiscal institutions mediate the bond market reaction to fiscal news. The assumption that motivates this analysis is that changes in fiscal conditions are less likely than the level of fiscal variables to be correlated with state voter preferences. Our study is designed to provide a new source of evidence on the economic effects of fiscal rules, while avoiding at least some of the endogeneity problems that may have affected earlier studies. Our results are complementary to those in Lowry and Alt 17, who estimate models in which the state’s borrowing cost depends on the current level of the state deficit, and the interaction of this deficit with the state’s fiscal rules. They find that deficits matter less for bond yields in states with tight fiscal constitutions than in states with looser fiscal rules. Their analysis is based on bond yields for the 19731990 period. Our analysis focuses on deficit shocks, not deficit levels, and relies on data for the 19881999 period. The parallel between our findings and theirs is reassuring, and it suggests that our results are not simply an artifact of the recent period for which budget ‘‘shock’’ data are available. This paper is divided into five sections. The first presents our model of yield determination in the tax-exempt bond market and explains how we view fiscal institutions as affecting yields. Section 2 describes our framework for estimating the ‘‘fiscal shock’’ experienced by different states in different years. The third section summarizes the state fiscal institutions that we consider, and it reports descriptive statistics on the level of bond yields in different states. Section 4 presents our principal empirical findings. It focuses on results using a 10-year panel of borrowing costs and fiscal institutions for a set of 39 states. The last section summarizes our findings and suggests promising directions for future work.

This paper presents new evidence on the economic effect of state fiscal institutions. Previous studies have found that the presence of various fiscal rules, such as tax or expenditure limits, affects the average borrowing costs that states face. Our analysis seeks to avoid the potential endogeneity of fiscal rules by studying how the tax-exempt bond market reacts to changes in state fiscal conditions. We present clear evidence of a link between unexpected changes in state deficits and surpluses and changes in the required yield on generalobligation debt. Moreover, the presence or absence of various fiscal rules affects the impact of unexpected deficits on yields. For example, the presence of a limit on the state’s capacity to raise taxes is associated with a larger increase in borrowing costs when the state reports an unexpected deficit. These findings provide corroborative evidence on the economic importance of state fiscal rules. One important issue that we have not explored in any detail concerns the role of factors other than fiscal rules in explaining the bond market’s reaction to fiscal news. In results that are not reported here, we have estimated separate regressions for each state relating the change in borrowing costs to DEFSHOCK. These equations have only 11 time-series observations, and the coefficient estimates are necessarily imprecise. They nevertheless suggest substantial differences across states in the effect of an unexpected deficit on borrowing costs. The state-to-state coefficient differences are much larger than the differences suggested by our fiscal institution interactions, and these findings therefore suggest that there are potentially important omitted variables that have not been included in our analysis. Modeling the other factors that may affect the bond market’s reaction to state economic news and then developing empirical evidence for or against such models are important directions for future work. Case studies of actual changes in state fiscal conditions and the associated response of the tax exempt bond market could be useful starting points in this analysis. A second issue that would bear further analysis is the source of fiscal shocks. We have treated state fiscal shocks as though they are exogenous shocks that are beyond the control of state budget officers and elected officials. It is nevertheless possible that the degree of attention that states devote to revenue and expenditure forecasting may be affected by the perceived consequences of forecast errors. In states with tight fiscal rules, which do not experience large increases in borrowing costs when there are unexpected deficits, this may result in a smaller incentive to make accurate forecasts. We have just begun to investigate the correlation between budget rules and the accuracy of budget forecasts. A third issue that bears investigation is the extent to which fiscal crises, reflected in large values of the DEFSHOCK variable, result in ‘‘discontinuous’’ changes in fiscal policy. It is possible that situations such as fiscal crises that require substantial changes in state expenditure levels or state tax policies create a political dynamic that is different from the dynamic that leads to routine fiscal decisions. Such shocks could, for example, change the identity of agenda setters within the state political system, because they may require unusual legislative actions. If such discontinuous changes sometimes take place, then bond market participants may consider this possibility in reacting to news about state fiscal conditions. This suggests that the reaction to fiscal news might be nonlinear or might depend in subtle ways upon the state politicalenvironment. As the span of data on state fiscal conditions and bond yields continues to expand, particularly if the recent fiscal strength of states gives way to another period of fiscal crises, it may be possible to test for such effects. Finally, it would be useful to investigate systematically the rationality of state budget forecasts of both expenditures and revenues. There may be political influences on these forecasts, and the extent to which these forecasts make use of all publicly available information that could bear on the prediction problem is unclear. Future work could also study links between the fiscal rules, the associated costs of making inaccurate budget forecasts, and the precision of revenue and expenditure predictions.