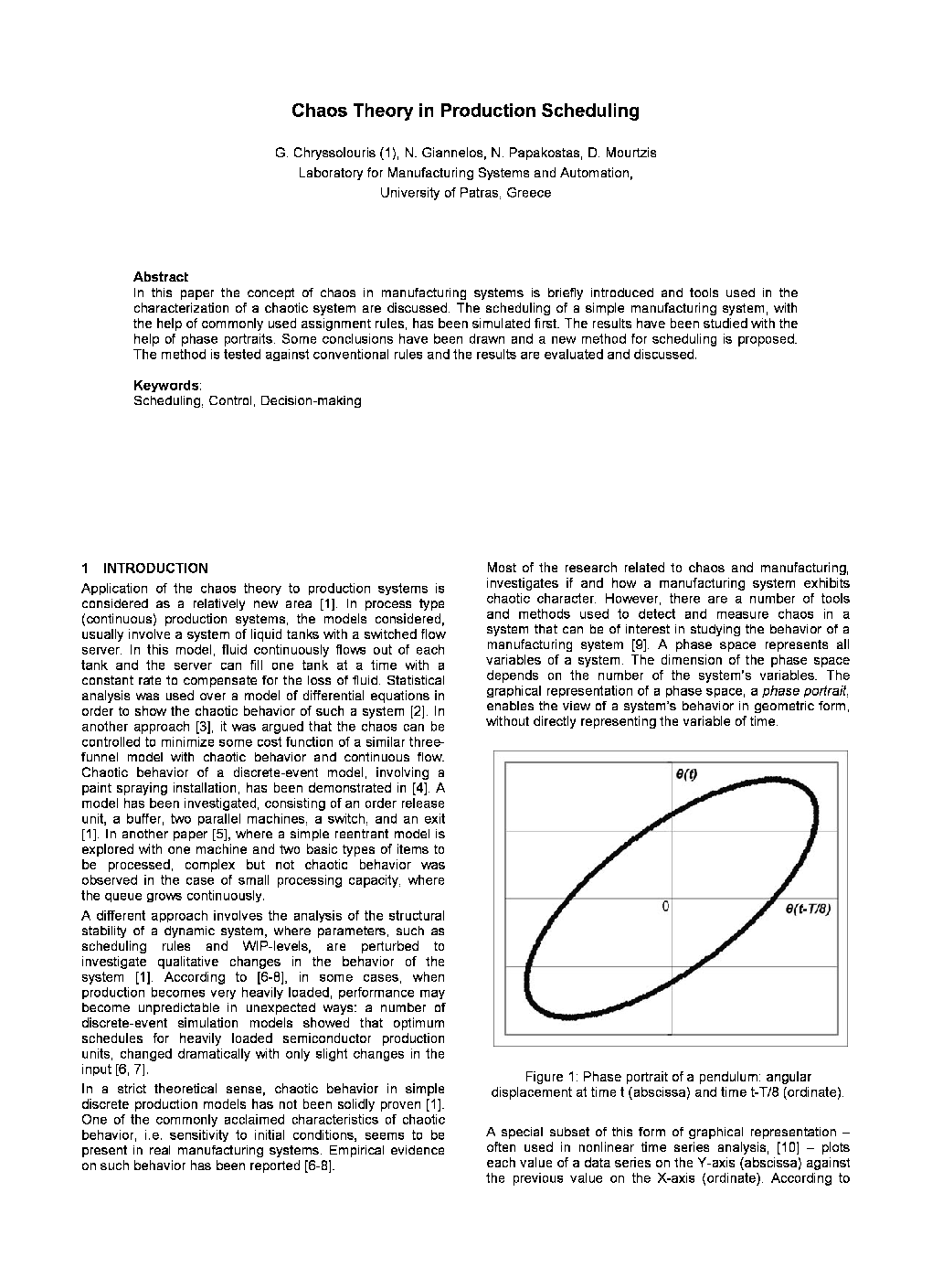 In this paper the concept of chaos in manufacturing systems is briefly introduced and tools used in the characterization of a chaotic system are discussed. The scheduling of a simple manufacturing system, with the help of commonly used assignment rules, has been simulated first. The results have been studied with the help of phase portraits. Some conclusions have been drawn and a new method for scheduling is proposed. The method is tested against conventional rules and the results are evaluated and discussed.

Application of the chaos theory to production systems is considered as a relatively new area [I]. In process type (continuous) production systems, the models considered, usually involve a system of liquid tanks with a switched flow server. In this model, fluid continuously flows out of each tank and the server can fill one tank at a time with a constant rate to compensate for the loss of fluid. Statistical analysis was used over a model of differential equations in order to show the chaotic behavior of such a system [2]. In another approach [3], it was argued that the chaos can be controlled to minimize some cost function of a similar threefunnel model with chaotic behavior and continuous flow. Chaotic behavior of a discrete-event model, involving a paint spraying installation, has been demonstrated in [4]. A model has been investigated, consisting of an order release unit, a buffer, two parallel machines, a switch, and an exit [I]. In another paper [5], where a simple reentrant model is explored with one machine and two basic types of items to be processed, complex but not chaotic behavior was observed in the case of small processing capacity, where the queue grows continuously. A different approach involves the analysis of the structural stability of a dynamic system, where parameters, such as scheduling rules and WIP-levels, are perturbed to investigate qualitative changes in the behavior of the system [I]. According to [6-81, in some cases, when production becomes very heavily loaded, performance may become unpredictable in unexpected ways: a number of discrete-event simulation models showed that optimum schedules for heavily loaded semiconductor production units, changed dramatically with only slight changes in the input [6, 71. In a strict theoretical sense, chaotic behavior in simple discrete production models has not been solidly proven [I]. One of the commonly acclaimed characteristics of chaotic behavior, i.e. sensitivity to initial conditions, seems to be present in real manufacturing systems. Empirical evidence on such behavior has been reported [6-81. Most of the research related to chaos and manufacturing, investigates if and how a manufacturing system exhibits chaotic character. However, there are a number of tools and methods used to detect and measure chaos in a system that can be of interest in studying the behavior of a manufacturing system [9]. A phase space represents all variables of a system. The dimension of the phase space depends on the number of the system's variables. The graphical representation of a phase space, a phase portrait, enables the view of a system's behavior in geometric form, without directly representing the variable of time. A special subset of this form of graphical representation - often used in nonlinear time series analysis, [lo] - plots each value of a data series on the Y-axis (abscissa) against the previous value on the X-axis (ordinate). According to [ I I ] and [12], such plots capture the topology of the system, for which there is no direct access. In case of a perfect pendulum (Figure 1) one can derive the angular displacement 8 at time t versus the angular displacement at a previous point of time t-T/8, where T, the pendulum's period. The work reported in this paper focuses on the use of phase portraits in studying dispatching rules in a manufacturing system and on devising a different dispatching policy, based on the analysis of phase portraits.