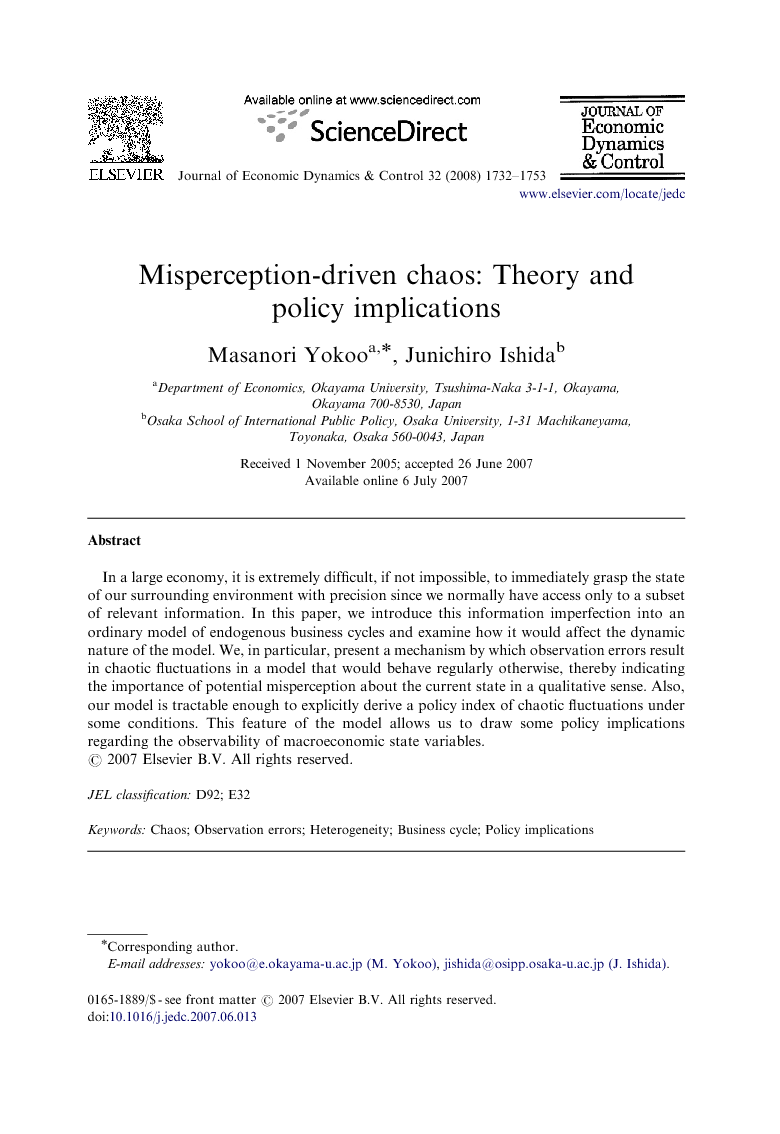 In a large economy, it is extremely difficult, if not impossible, to immediately grasp the state of our surrounding environment with precision since we normally have access only to a subset of relevant information. In this paper, we introduce this information imperfection into an ordinary model of endogenous business cycles and examine how it would affect the dynamic nature of the model. We, in particular, present a mechanism by which observation errors result in chaotic fluctuations in a model that would behave regularly otherwise, thereby indicating the importance of potential misperception about the current state in a qualitative sense. Also, our model is tractable enough to explicitly derive a policy index of chaotic fluctuations under some conditions. This feature of the model allows us to draw some policy implications regarding the observability of macroeconomic state variables.

In real life, we often face problems arising from the lack of information about our surrounding environments. It is especially true at the aggregate level since it is hard to immediately grasp the state of the entire economy that we live in. In many cases we never know whether what we observe accurately reflects the true state of the economy: one prominent example to capture this situation is Lucas (1972) where agents are unable to distinguish real disturbances from nominal ones. There is little doubt that the limited observability of macroeconomic state variables is a ubiquitous feature of our life. In this paper, we incorporate such an information imperfection into an otherwise ordinary model of endogenous business cycles and illustrate how it can affect the dynamic nature of the model. To this end, the present model builds on a model of endogenous business cycles, developed by Ishida and Yokoo (2004), which consists of two critical assumptions: first, it considers the effect of knowledge spillovers where firms are more productive when more firms engage in innovations; second, while each firm can innovate and upgrade its project, this innovation process is time consuming in that a firm which chooses to innovate its project must stay inactive for that period. Under these assumptions, the dynamics of the model is characterized by a piecewise linear difference equation with two distinct regimes and exhibits asymmetric periodic cycles of arbitrary period.1 This baseline model is augmented by potential misperception about the current state, by which we mean that firms can observe relevant state variables only with some noise. The addition gives rise to complicated dynamics including both transient and observable chaos, i.e., chaotic fluctuations driven by misperception about the current state. Given this structure, there are two main issues we would like to stress in this paper. First, the present model sheds light on a simple mechanism by which observation errors lead to chaotic fluctuations in an economy which would behave with some regularities otherwise. This result indicates that potential misperception about the current state can be an important source of dynamic diversity, especially complexity. Since the present model is based on a model of asymmetric business cycles, the model provides a simple way to capture the aperiodic and asymmetric nature of business cycles in a deterministic framework.2 Second, the present model, which turns out to be piecewise linear, is simple and tractable enough to compute the time average of technological innovations under some conditions by using the techniques of Frobenius–Perron operators to compute invariant measures (see, e.g. Boyarsky and Scarowsky, 1979 and Boyarsky and Góra, 1997). This feature of the model allows us to explicitly compute and assess some policy index of chaotic fluctuations.3 Since chaotic fluctuations in our model are driven by misperception about the current state, this amounts to some policy implications regarding the observability of macroeconomic state variables. Along this line, we examine whether the access to more accurate information, possibly by government interventions, would lead to more innovations and show that the effect of a reduction in the variance of observation errors is indeed ambiguous, depending on the underlying circumstance. As an additional implication, the present paper also raises an important connection between observation errors and heterogeneity among agents. Observation errors lead to behavioral heterogeneity, which subsequently has qualitative effects on the dynamics of the model.4 In this particular sense, the present model is related to the recent macroeconomic literature which explores the role of heterogeneity in the nonlinear dynamic process. To name a few, Brock and Hommes, 1997 and Brock and Hommes, 1998 consider models in which agents choose heterogeneous predictors based on the past observations in an adaptively rational way, showing that chaotic dynamics are possible. Barinci (2001) studies a finance-constrained economy featuring two classes of agents (capitalists and workers) with heterogeneous preferences and shows that heterogeneity allows Hopf bifurcations consistent with a wide range of elasticities of substitutions. Onozaki et al. (2003) provide a nonlinear cobweb model whose qualitative dynamic properties may fundamentally be changed by slight behavioral heterogeneity in adjustment speed of production of firms, showing that the introduction of a single heterogeneous agent may result in a drastic increase in the number of periodic attractors due to homoclinic bifurcations. See Hommes (2006) for a recent survey for heterogeneous-agent models. The organization of the paper is as follows. Section 2 briefly illustrates the baseline model and modifies it by introducing observation errors. Section 3 analyzes optimal innovation decisions under limited observability. Section 4 analyzes as a benchmark the case of perfect observability. Section 5 deals with a specific example where observation errors are uniformly distributed and shows that the model is able to exhibit a rich class of dynamics, including both transient and observable chaos. Section 6 offers some policy implications under chaotic business cycles. Finally, Section 7 gives some concluding remarks and suggests possible topics for future research.

We introduced observation errors into a business cycle model and explored how potential misperception about the current state can affect the qualitative dynamic feature of the underlying economic system. The analysis reveals that the presence of informational uncertainty could indeed have a qualitative impact and give rise to complicated dynamics, including observable chaos. Since it seems quite natural to introduce misperception or heterogeneity into economic analyses, we argue that our modeling methodology can be applied to a range of economic analyses as a potential tool to build tractable nonlinear models capable of chaotic dynamics. Moreover, under certain conditions, the present model is tractable enough to derive sufficient conditions for the occurrence of observable chaos and, more importantly, to directly assess output gains and losses of chaotic fluctuations. This feature of the model (Markov properties) allows us to offer some policy implications regarding the observability of macroeconomic state variables. For future research, it is of interest to examine whether and to what extent the analytical tools developed for our model with Markov properties can be used to approximate other more general nonlinear economic models with complex dynamics to derive some useful policy implications.