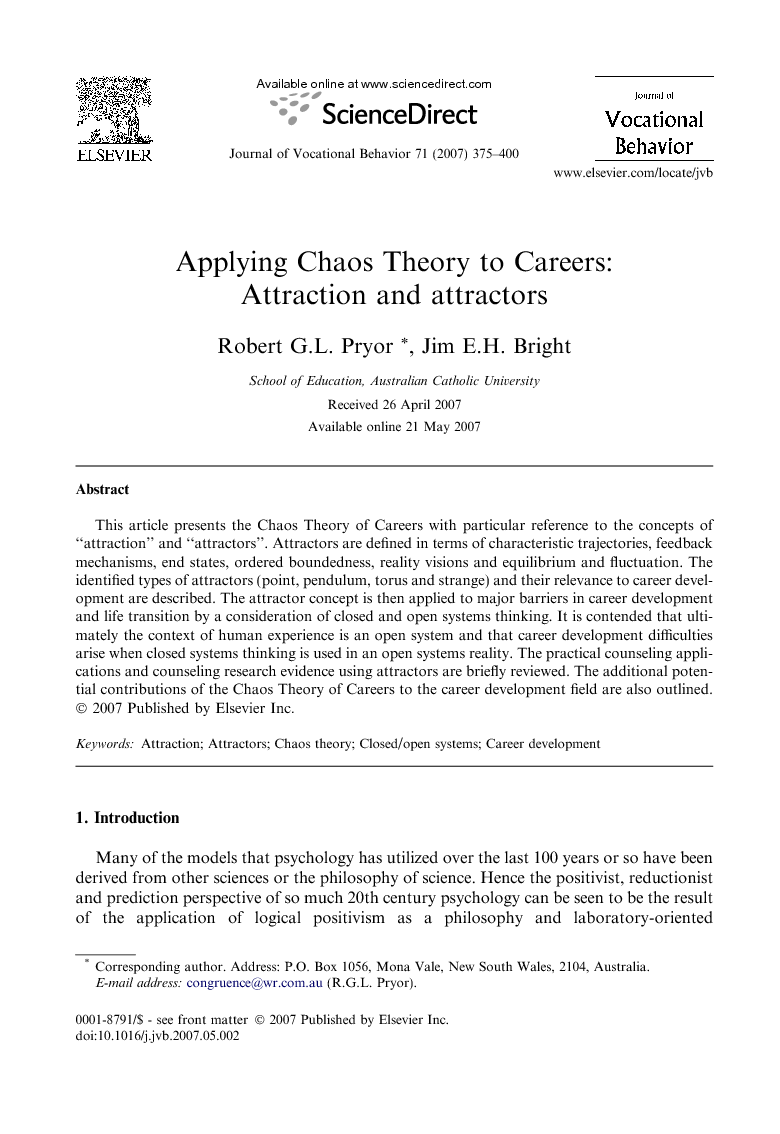 This article presents the Chaos Theory of Careers with particular reference to the concepts of “attraction” and “attractors”. Attractors are defined in terms of characteristic trajectories, feedback mechanisms, end states, ordered boundedness, reality visions and equilibrium and fluctuation. The identified types of attractors (point, pendulum, torus and strange) and their relevance to career development are described. The attractor concept is then applied to major barriers in career development and life transition by a consideration of closed and open systems thinking. It is contended that ultimately the context of human experience is an open system and that career development difficulties arise when closed systems thinking is used in an open systems reality. The practical counseling applications and counseling research evidence using attractors are briefly reviewed. The additional potential contributions of the Chaos Theory of Careers to the career development field are also outlined.

Many of the models that psychology has utilized over the last 100 years or so have been derived from other sciences or the philosophy of science. Hence the positivist, reductionist and prediction perspective of so much 20th century psychology can be seen to be the result of the application of logical positivism as a philosophy and laboratory-oriented experimentation as the research method paradigm. The field of career development theory also has been a regular borrower of conceptualizations in science in general and in other domains of psychology in particular. Among the obvious examples are Super’s (1957) incorporation of “self-concept” personality theory, Roe’s (1956) incorporation of Freudian ideas, the social learning theory of career decision making (Mitchell & Krumboltz, 1990), Super’s (1980) revision of his theory under the influence of life span psychology, social cognitive theory (Lent, Brown, & Hackett, 1994) and Patton and McMahon’s (1999) adaptation of systems theory. While at first such appropriations might suggest a singular lack of imagination and creativity on the part of most career development theory developers, further reflection uncovers a different perspective. If there is a coherent unity to reality, a fundamental assumption of all traditional science (Davies, 1992), then explanations of some kinds of events and behaviors should reasonably have applications to other events and behaviors. Indeed we often judge the worth of a theory by the breadth of its application (Greene, 1999). Thus it seems not only defensible to take concepts from one scientific domain and apply them to for example, career development, it appears laudable since the power of great scientific theories is in their ability to link apparently disparate and unrelated phenomena to one another through some general principles. Indeed even career development counseling has drawn inspiration from the physical sciences as instanced in Amundson’s (2003b), “The Physics of Living”. Therefore, it should not be surprising that the more recent developments in the physical sciences which appear to have undermined many of the claims of positivist-reductionism, would find their incorporation into career development theory. Chaos theory has been designated the “third revolution” of 20th century science—the first two being relativity and quantum mechanics (Moore, 2002). For at least 20 years psychologists have been interested in how such concepts may assist in providing a new understanding of thinking and behavior (Butz, 1997). Most of these applications have been in clinical psychology but more recently career development writers have begun to display increasing interest in both chaos theory and complexity theory (Bloch, 2005 and Bright and Pryor, 2005a). Why should not the same fundamental principles and perspectives which assist us to understand the nature of the physical universe also apply to the psychology of human thought and behavior which are as much a part of that universe as the Bernoulli Effect or black holes in space? Some modern organizations now look to the natural world and its capacity for adaptation and decentralization as models for the way they structure the working environment and work processes of their employees (Jacobs, 2000). Moreover, the reason science reveres Isaac Newton is that he demonstrated how the same underlying principles explained such diverse phenomenon as the movement of tides, the orbits of planets and the fall of an apple. It is such thinking that we believe, justifies the application of chaos theory not only to human thinking and behavior in general but also to career development theory and behavior in particular. Thus we asked ourselves could the same theoretical perspective which addresses Poincare’s “three body problem” of planetary prediction and Lorenz’s computer programs uncovering the essential unpredictability of the weather (Peat, 2002), also apply to those negotiating career transitions? In fact if connectedness is an essential aspect of reality (Barabasi, 2003) it makes eminent good sense, that career development theory should find explicable links to psychology in general and in turn, to all science and ultimately to all human quests for understanding. That there are applications of chaos theory in politics, economics, arts, theology as well as the sciences, suggests the reasonableness of this expectation and of the aspiration to develop the chaos theory of careers. Moreover in the last 15 years or so a new set of concepts have been used to describe the realities of career development and life transition that are either (consciously or unconsciously) derived from or compatible with chaos theory formulations. Among these are “positive uncertainty” (Gelatt, 1991), “emergent qualities” (Leong, 1996), “happenstance” (Mitchell, Levin, & Krumboltz, 1999), “bifurcation” (Laszlo, 1991), “contextualism” (Young, Valach, & Collin, 1996), “non-linear change” (Leong, 1996), “systems” (Patton & McMahon, 1999), “luck readiness” (Nealt, 2002) “spirituality” (Bloch, 2000) “career craft” (Amundson, 2003a) “career chance” (Chen, 2005) and ‘narrative” (Savickas, 1997). It is our contention that chaos theory represents a theoretical way to integrate these concepts into a holistic understanding of career development and life transition (Pryor & Bright, 2004). However, as well as providing a theoretical infrastructure for already extant ideas and concepts in career development, it seems reasonable to ask: what new ideas, insights and counseling practices can be derived from chaos theory when applied to careers and life transitions? This paper endeavors to outline the application of chaos theory to careers and to answer this question by reference to the chaos theory concept of “attraction” and its instantiation as various attractors (Butz, 1997).