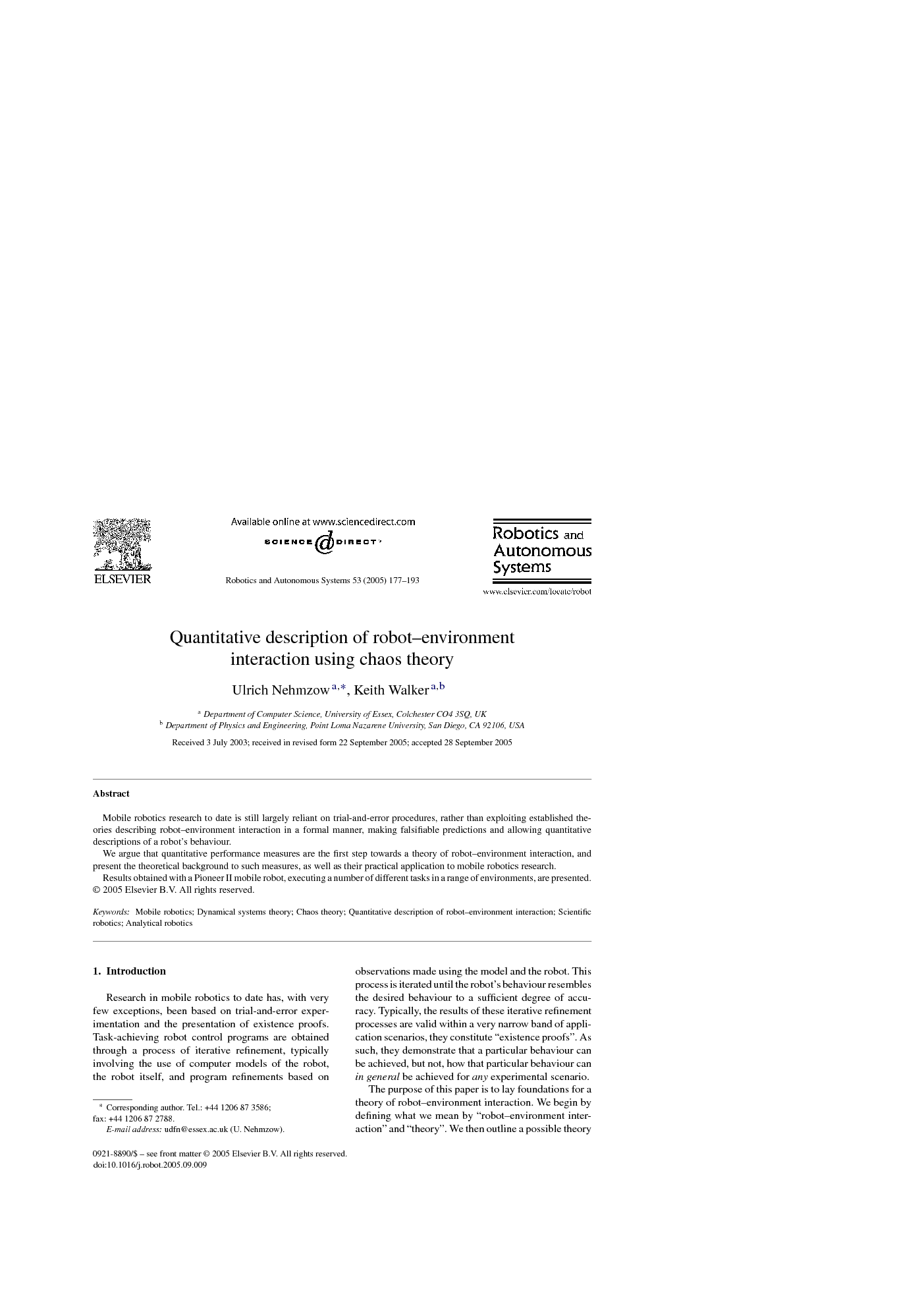 Mobile robotics research to date is still largely reliant on trial-and-error procedures, rather than exploiting established theories describing robot–environment interaction in a formal manner, making falsifiable predictions and allowing quantitative descriptions of a robot's behaviour. We argue that quantitative performance measures are the first step towards a theory of robot–environment interaction, and present the theoretical background to such measures, as well as their practical application to mobile robotics research. Results obtained with a Pioneer II mobile robot, executing a number of different tasks in a range of environments, are presented.

Research in mobile robotics to date has, with very few exceptions, been based on trial-and-error experimentation and the presentation of existence proofs. Task-achieving robot control programs are obtained through a process of iterative refinement, typically involving the use of computer models of the robot, the robot itself, and program refinements based on observations made using the model and the robot. This process is iterated until the robot's behaviour resembles the desired behaviour to a sufficient degree of accuracy. Typically, the results of these iterative refinement processes are valid within a very narrow band of application scenarios, they constitute “existence proofs”. As such, they demonstrate that a particular behaviour can be achieved, but not, how that particular behaviour can in general be achieved for any experimental scenario. The purpose of this paper is to lay foundations for a theory of robot–environment interaction. We begin by defining what we mean by “robot–environment interaction” and “theory”. We then outline a possible theory of robot–environment interaction, and in part II of this paper present results obtained through experimentation with Pioneer II mobile robots, applying the principles outlined in part I of this paper. 1.1. Robot–environment interaction When we speak of “robots” in this paper, we mean situated, embodied mobile robots operating in a real-world environment. “Situated” refers to an agent (in this case a mobile robot) operating within an embracing framework, a “world”, that it cannot leave—the agent cannot “step outside” its environment, and actions performed can affect the environment, and change it for the robot. For example, a situated agent has to operate within the time frame made available for it, e.g. the clock cannot be stopped for lengthy computations. In contrast to artificial, simulated environments, where time or the results of physical actions (e.g. collisions) may be ignored by the agent, the physical, real-world is always “there” and imposes its restrictions on the situated agent, whatever the agent's actions, etc. “Embodied” refers to physical agents whose morphology does matter with respect to the agent's interaction with the environment. For instance, the modality and physical positioning of sensors does affect a robot's behaviour, and it is a known fact that different robot behaviour can be obtained by simply repositioning sensors, without ever re-programming the robot. It follows from these considerations that the behaviour of a mobile robot cannot be discussed in isolation: it is the result of properties of the robot itself (physical aspects—the “embodiment”), the environment (“situatedness”), and the control program (the “task”) the robot is executing (see Fig. 1). The following illustration may help to appreciate this point: it is well known to robotics practioners that a “failing” robot can be made successful by either (i) changing the robot's control code (“task”), (ii) modifying the environment (for example by adding sensor-reflective strips, i.e. changing the “environment”), or (iii) by adding extra sensors (“robot”). This triangle of robot, task and environment constitutes a non-linear system, whose analysis is the purpose of any theory of robot–environment interaction. Rather than speaking solely of a robot's behaviour, it is therefore necessary to speak of robot–environment interaction, and the robot's behaviour resulting thereof.