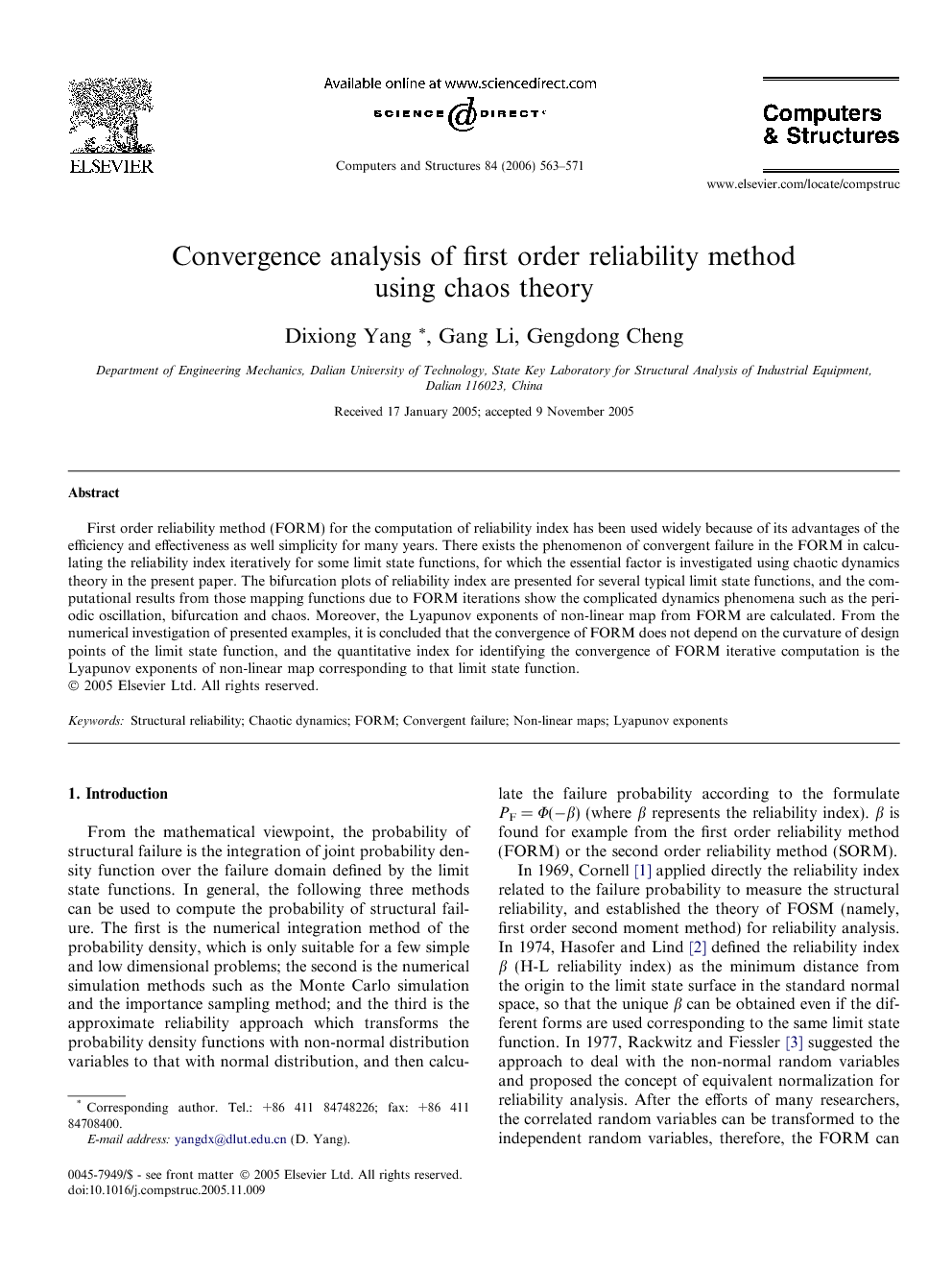 First order reliability method (FORM) for the computation of reliability index has been used widely because of its advantages of the efficiency and effectiveness as well simplicity for many years. There exists the phenomenon of convergent failure in the FORM in calculating the reliability index iteratively for some limit state functions, for which the essential factor is investigated using chaotic dynamics theory in the present paper. The bifurcation plots of reliability index are presented for several typical limit state functions, and the computational results from those mapping functions due to FORM iterations show the complicated dynamics phenomena such as the periodic oscillation, bifurcation and chaos. Moreover, the Lyapunov exponents of non-linear map from FORM are calculated. From the numerical investigation of presented examples, it is concluded that the convergence of FORM does not depend on the curvature of design points of the limit state function, and the quantitative index for identifying the convergence of FORM iterative computation is the Lyapunov exponents of non-linear map corresponding to that limit state function.

From the mathematical viewpoint, the probability of structural failure is the integration of joint probability density function over the failure domain defined by the limit state functions. In general, the following three methods can be used to compute the probability of structural failure. The first is the numerical integration method of the probability density, which is only suitable for a few simple and low dimensional problems; the second is the numerical simulation methods such as the Monte Carlo simulation and the importance sampling method; and the third is the approximate reliability approach which transforms the probability density functions with non-normal distribution variables to that with normal distribution, and then calculate the failure probability according to the formulate PF = Φ(−β) (where β represents the reliability index). β is found for example from the first order reliability method (FORM) or the second order reliability method (SORM). In 1969, Cornell [1] applied directly the reliability index related to the failure probability to measure the structural reliability, and established the theory of FOSM (namely, first order second moment method) for reliability analysis. In 1974, Hasofer and Lind [2] defined the reliability index β (H-L reliability index) as the minimum distance from the origin to the limit state surface in the standard normal space, so that the unique β can be obtained even if the different forms are used corresponding to the same limit state function. In 1977, Rackwitz and Fiessler [3] suggested the approach to deal with the non-normal random variables and proposed the concept of equivalent normalization for reliability analysis. After the efforts of many researchers, the correlated random variables can be transformed to the independent random variables, therefore, the FORM can be used to calculate the reliability index of the limit state function with random variables of any kind of density distribution. The HL-RF algorithm, which was developed by Hosfer, Lind, Rackwitz and Fiessler for reliability index corresponding to FORM, has been accepted widely by the engineering community because of its advantages of the efficiency and effectiveness as well simplicity for many years, and it was recommended as the method of reliability analysis by the Joint Committee of Structural Safety (JCSS). Generally, it is considered that if the degree of non-linearity of the limit state function is low, the HL-RF algorithm can obtain the results with enough accuracy after some iterations. However, if the curvature value near the design point at the limit state surface is large, the sequential points during iterating may oscillate in the domain near the design point and do not converge. The above explanation is reasonable to some extent undoubtedly, and some improved methods were proposed based on this understanding. For examples, Liu and Kiureghian [4] introduced the merit function to monitor the convergence of iterative sequence of FORM to improve the adaptability of reliability method. Wang and Grandhi [5] and [6] established the approximate polynomial of limit state functions by using the intervening variables, and then applied the FORM to evaluate the probability of structural failure. Li et al. [7] referred to the approach of enhancing the robustness of non-linear programming algorithms and investigated an improved FORM algorithm. Gong et al. [8] improved the iterative process and convergence of FORM algorithm to some extent through adjusting the iterative step length. The chaos theory [9] has been applied to deal with the high non-linearity in the discrete and continuous dynamic system in both science and engineering fields effectively for some years. We think that it is helpful to understand the nature of FORM better by investigating the inherent causes of the convergent failure of FORM from the perspective of chaotic dynamics. In some cases, non-linear limit state functions present convergent failure during the iterative process when computing the reliability index β by FORM in some specific parameter intervals. Moreover, the reliability index will be in the state of periodic solutions, and go to the chaotic state through the route of periodic doubling bifurcation. Therefore, for both the practical application of FORM and the development and performance evaluation of new approximate reliability methods, the inherent relationship between FORM and chaotic dynamics should be investigated. This paper presents the bifurcation and chaos phenomenon of the iterative algorithm of FORM for several non-linear limit state functions. And the Lyapunov exponents for non-linear map derived from FORM are calculated and discussed. Finally, the conclusions are drawn.

The essential causes for the convergent failure for calculating the reliability index using FORM are discussed based on the chaos theory. The bifurcation plots of reliability index are presented for several typical limit state functions in the references, and the computing results from those mapping functions due to the FORM iterations show the complicated dynamics phenomena such as the periodic oscillation, bifurcation and chaos as well. Furthermore, the curvature of the design points of the limit state function is calculated, and the Lyapunov exponents of non-linear map from the FORM iteration are analyzed and discussed. It is concluded that, there is not a simple relationship between the curvature value of design points of the limit state function and the convergence of FORM iteration. Moreover, the Lyapunov exponents reflect the dynamics property of non-linear system in the statistical meanings, and they can be used to describe the solution behavior of non-linear multidimensional map corresponding to the limit state function due to the FORM iteration quantitatively. In a word, the examination of FORM based on the chaotic dynamics is helpful to understand the nature of FORM and its computational results comprehensively, and it provides a novel perspective for the application, development and evaluation of the approximate reliability algorithms. In the end, it should be noted that, many differential equations could give a chaotic behavior, and yet a numerical solution of those equations is possible. On the other hand, many governing equations in the structural engineering and engineering mechanics are highly non-linear, and the numerical algorithm by iterative scheme to solve them is easy to fail because of the non-convergence of periodic oscillation, so that the correct solutions, generally the fixed points, of iterative map cannot be obtained. However, the reason for the non-convergence of iterative algorithm is not explored clearly and fully, although sometimes the superficial explanation is given. Therefore, it is necessary and important for engineering and scientific computation that the crucial and essential factors for numerical failure are found and the corresponding measures are taken. It is a feasible approach to try to reveal the phenomenon of non-convergence and get the expected fixed points of iterative scheme in the framework of chaotic dynamics in the future investigation.