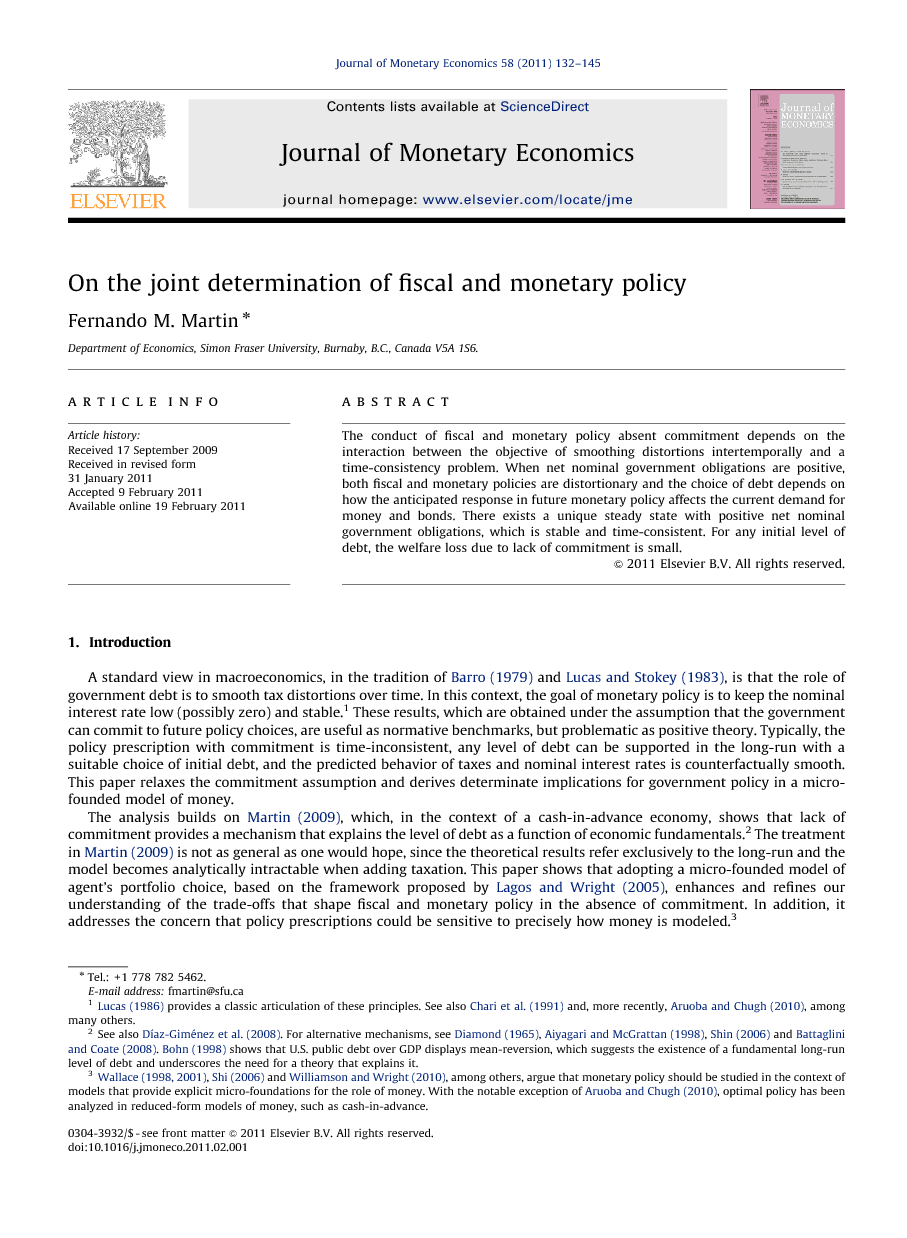 The conduct of fiscal and monetary policy absent commitment depends on the interaction between the objective of smoothing distortions intertemporally and a time-consistency problem. When net nominal government obligations are positive, both fiscal and monetary policies are distortionary and the choice of debt depends on how the anticipated response in future monetary policy affects the current demand for money and bonds. There exists a unique steady state with positive net nominal government obligations, which is stable and time-consistent. For any initial level of debt, the welfare loss due to lack of commitment is small.

A standard view in macroeconomics, in the tradition of Barro (1979) and Lucas and Stokey (1983), is that the role of government debt is to smooth tax distortions over time. In this context, the goal of monetary policy is to keep the nominal interest rate low (possibly zero) and stable.1 These results, which are obtained under the assumption that the government can commit to future policy choices, are useful as normative benchmarks, but problematic as positive theory. Typically, the policy prescription with commitment is time-inconsistent, any level of debt can be supported in the long-run with a suitable choice of initial debt, and the predicted behavior of taxes and nominal interest rates is counterfactually smooth. This paper relaxes the commitment assumption and derives determinate implications for government policy in a micro-founded model of money. The analysis builds on Martin (2009), which, in the context of a cash-in-advance economy, shows that lack of commitment provides a mechanism that explains the level of debt as a function of economic fundamentals.2 The treatment in Martin (2009) is not as general as one would hope, since the theoretical results refer exclusively to the long-run and the model becomes analytically intractable when adding taxation. This paper shows that adopting a micro-founded model of agent's portfolio choice, based on the framework proposed by Lagos and Wright (2005), enhances and refines our understanding of the trade-offs that shape fiscal and monetary policy in the absence of commitment. In addition, it addresses the concern that policy prescriptions could be sensitive to precisely how money is modeled.3 Without commitment, the objective of smoothing distortions intertemporally is weighted against a time-consistency problem created by the interaction between debt and monetary policy. On the one hand, the level of debt inherited by the government influences its monetary policy choice since inflation reduces the real value of nominal liabilities. On the other hand, the anticipated response of future monetary policy affects the current demand for money and bonds, and thereby the trade-offs faced by the government today when deciding how much debt to leave to its successor. To expand on the mechanism described above, consider the effects of increasing the debt. This action will induce the government tomorrow to raise the money growth rate to alleviate the added financial burden. For standard assumptions on preferences, a faster expansion of the money supply would make it more valuable for agents tomorrow to have started the period with more money. Hence, the current demand for money increases, which slackens the government budget constraint today. However, a higher money growth rate tomorrow decreases the future value of nominal bonds, and therefore, their current demand. Thus, agents will ask today for a higher return on debt, which tightens the government budget constraint due to the added financial cost. The government increases the debt if the overall effect on the demand for money and bonds results in a slackening of its budget constraint, and reduces it in the opposite case. The gains from varying the level of debt are traded-off with the costs from lower distortion smoothing. Assuming the government does not start with sufficiently large claims on the private sector (i.e., negative debt), debt converges to a unique steady state, with positive net nominal obligations, and where both fiscal and monetary policies are distortionary. This steady state is time-consistent: endowing the government at this point with a commitment technology would have no effect on policy. The size of long-run debt depends on the determinants of the money demand, which confirms the results derived in cash-in-advance models. Within the Lagos–Wright framework, the critical determinants are the intertemporal elasticity-of-substitution and the measure of buyers in the market where money is the only medium of exchange. In contrast to the equilibrium described above, if the government were allowed to commit, then distortions would be smoothed perfectly over time after the initial period. Thus, any level of debt can be supported in the long-run by appropriately choosing initial debt. Despite the stark differences in policy prescription, the welfare cost arising from lack of commitment is small. For example, for debt levels between zero and twice the U.S. average, the welfare cost is at most equivalent to a one-time fee of 0.04% of a year's consumption. The low welfare numbers associated with lack of commitment suggest that the search for institutional arrangements that would induce the government to behave closer to the optimal (commitment) policy should not be a primary concern. The rest of the paper is organized as follows. Section 2 describes the environment and characterizes the monetary equilibrium for a given government policy. Section 3 formulates the government's problem, characterizes equilibrium policy and derives the main theoretical results. Section 4 compares government policy with and without commitment. Section 5 concludes.4

The model presented in this paper offers several attractive properties for policy analysis from a positive perspective. There exists a unique steady state with positive net nominal government liabilities, which is stable, time-consistent and features positive taxes and inflation above the Friedman rule. It is straightforward to verify that these properties would survive a number of extensions to the basic environment; e.g., financial intermediation and trading frictions. Martin (2010a) analyzes these extensions in detail and further studies the empirical plausibility of this framework.