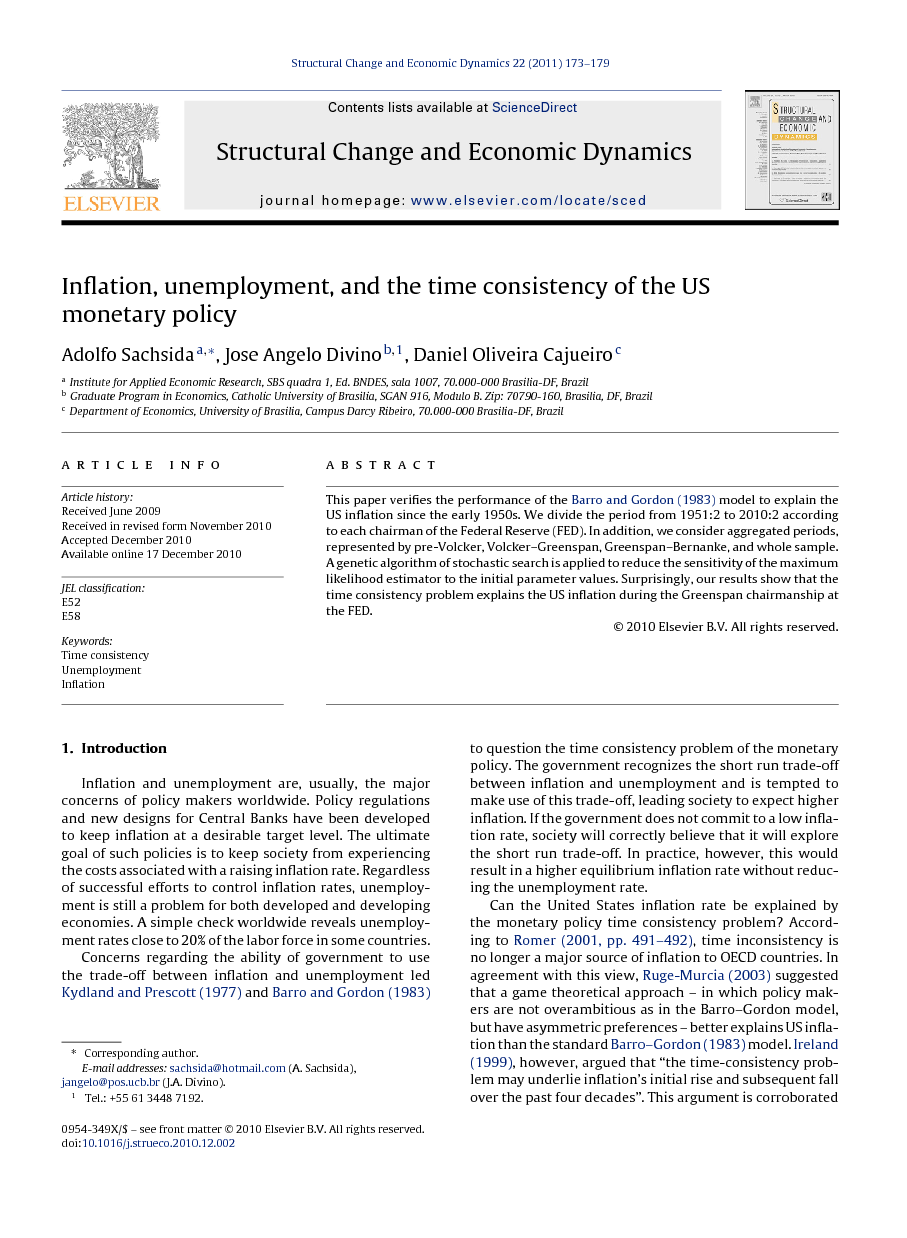 This paper verifies the performance of the Barro and Gordon (1983) model to explain the US inflation since the early 1950s. We divide the period from 1951:2 to 2010:2 according to each chairman of the Federal Reserve (FED). In addition, we consider aggregated periods, represented by pre-Volcker, Volcker–Greenspan, Greenspan–Bernanke, and whole sample. A genetic algorithm of stochastic search is applied to reduce the sensitivity of the maximum likelihood estimator to the initial parameter values. Surprisingly, our results show that the time consistency problem explains the US inflation during the Greenspan chairmanship at the FED.

This paper addressed the ability of the time consistency problem, as defined by Barro and Gordon (1983), to explain the behavior of the US inflation during the period from 1952:2 to 2010:2. We modified Ireland's (1999) approach in three different ways. First, we considered sub-samples corresponding to each chairman of the FED, and aggregate periods for pre-Volcker, Volcker–Greenspan, Greenspan–Bernanke, and whole sample. Second, we applied recently modified time series unit root tests, which have better size and power properties than the traditional ones used by Ireland (1999). Third, we introduced a genetic algorithm of stochastic search to find the maximum likelihood estimates of the model's state space representation. In the long run, the results show evidence of co-integration between inflation and unemployment during the terms of Burns and Miller, Volcker–Greenspan, Greenspan, and in the whole sample. This finding can be taken as primary evidence that the time consistency problem explains the dynamic of the US inflation during those periods. In fact, this result suggests that there is an important long run co-movement between inflation and unemployment in the US economy, as also suggested by King and Watson (1994) using a different approach. The short run restrictions shed new light on the time consistency problem. The results showed that the Barro and Gordon's (1983) short run restrictions can be rejected in all but one sub-period. Surprisingly, only for the Greenspan chairmanship at the FED the model's short run restrictions were not rejected. This means that the simple version of the Barro and Gordon (1983) model here considered was able to account for the short run US inflation dynamics during that period. Given that inflation and unemployment were found to be co-integrated, it is possible to conclude that the time consistency problem fully explained US inflation dynamics during the Greenspan era. This finding contradicts the view that the Greenspan period was characterized by a strictly anti-inflation monetary policy. In fact, movements in the unemployment rate accounted for the inflation dynamics during that period. Thus, the decline in the volatility of the US inflation observed in the last decades, which was attributed by Stock and Watson (2002), Ahmed et al. (2004), Surico (2008), and Bae (2010) to good conduction of the monetary policy, should be attributed to exogenous causes, or to the “good luck” hypothesis, according to the testable restrictions imposed by Barro and Gordon (1983) model. This was the case at least during the Greenspan's chairmanship at the FED.