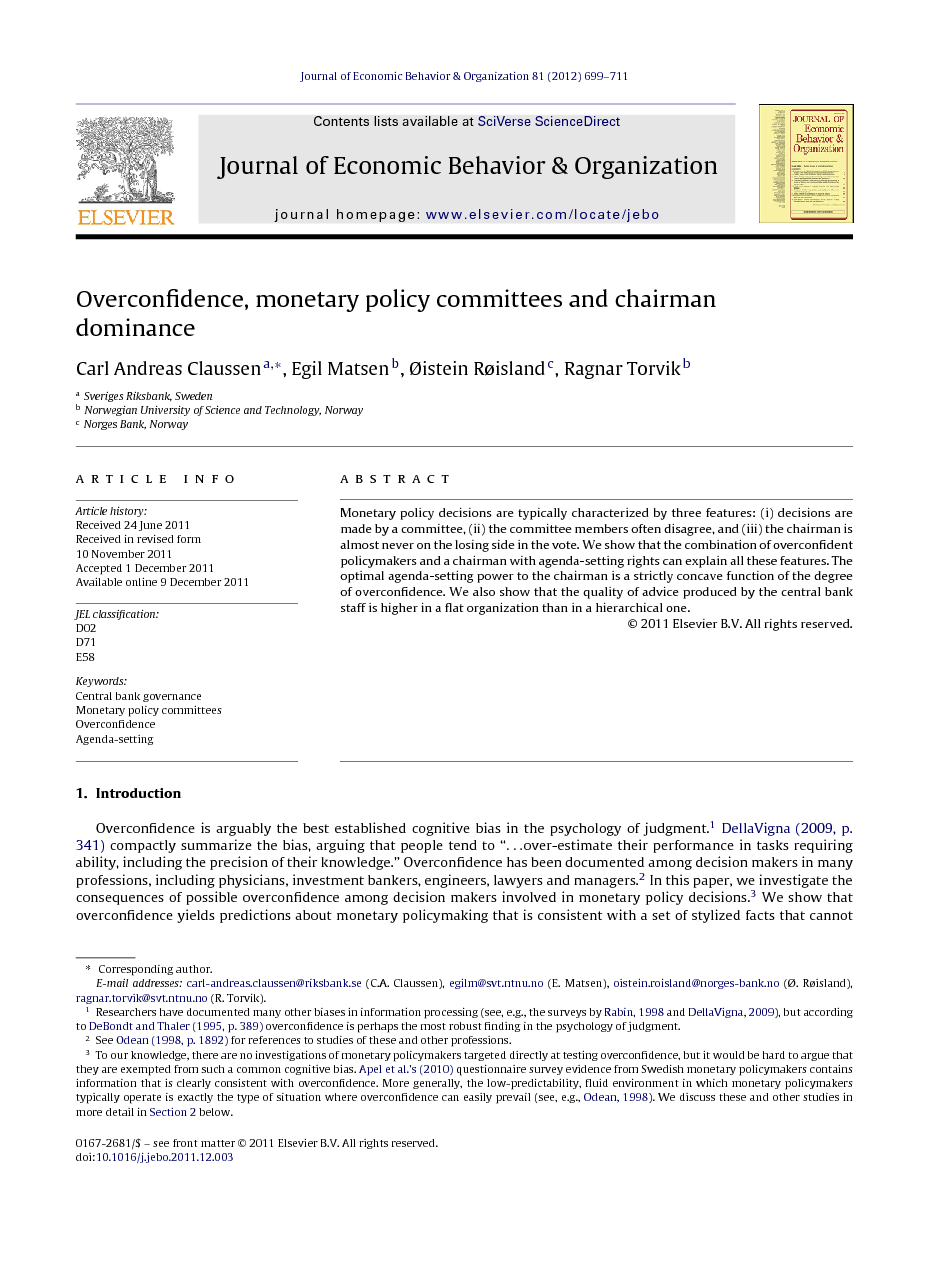 Monetary policy decisions are typically characterized by three features: (i) decisions are made by a committee, (ii) the committee members often disagree, and (iii) the chairman is almost never on the losing side in the vote. We show that the combination of overconfident policymakers and a chairman with agenda-setting rights can explain all these features. The optimal agenda-setting power to the chairman is a strictly concave function of the degree of overconfidence. We also show that the quality of advice produced by the central bank staff is higher in a flat organization than in a hierarchical one.

In contemporary central banking, the formal decision power over monetary policy is delegated to an MPC rather than a single individual. There is considerable disagreement about policy within MPCs, leading to a great deal of dissent in actual policy decisions. Yet, MPC chairmen almost never lose a vote about monetary policy. In this paper, we have provided a theory for these stylized facts about the decision structure in modern central banks. Our theory rests on the notion that people are not perfect information aggregators, and in particular that they may be subject to overconfidence. An MPC with decision power reduces the policy risk occurring when an overconfident chairman gives a suboptimal weight to staff judgments. Overconfidence also yields disagreement and dissent among decision makers, and this gives the chairman too little influence if policy is set through simple majority voting. Giving the chairman extra decision power through agenda-setting rights restores his influence, but also means that he generally will not lose when there is a vote in the MPC. We emphasize that the MPC still has important, but largely unobservable policy influence by inducing moderation from the chairman (and his staff). We have seen that even though overconfidence provides a reason for an institutional setting where the chairman has agenda setting power, the extent of such power should be limited if overconfidence is perceived to be a severe problem. Neither a chairman deciding alone or an MPC with simple majority voting are optimal as long as there is positive but a bounded degree of overconfidence. Finally, we have shown that overconfidence implies that flat structures of information transmission within the central bank staff are superior to hierarchical structures in terms of the quality of advice reaching the bank's chairman.