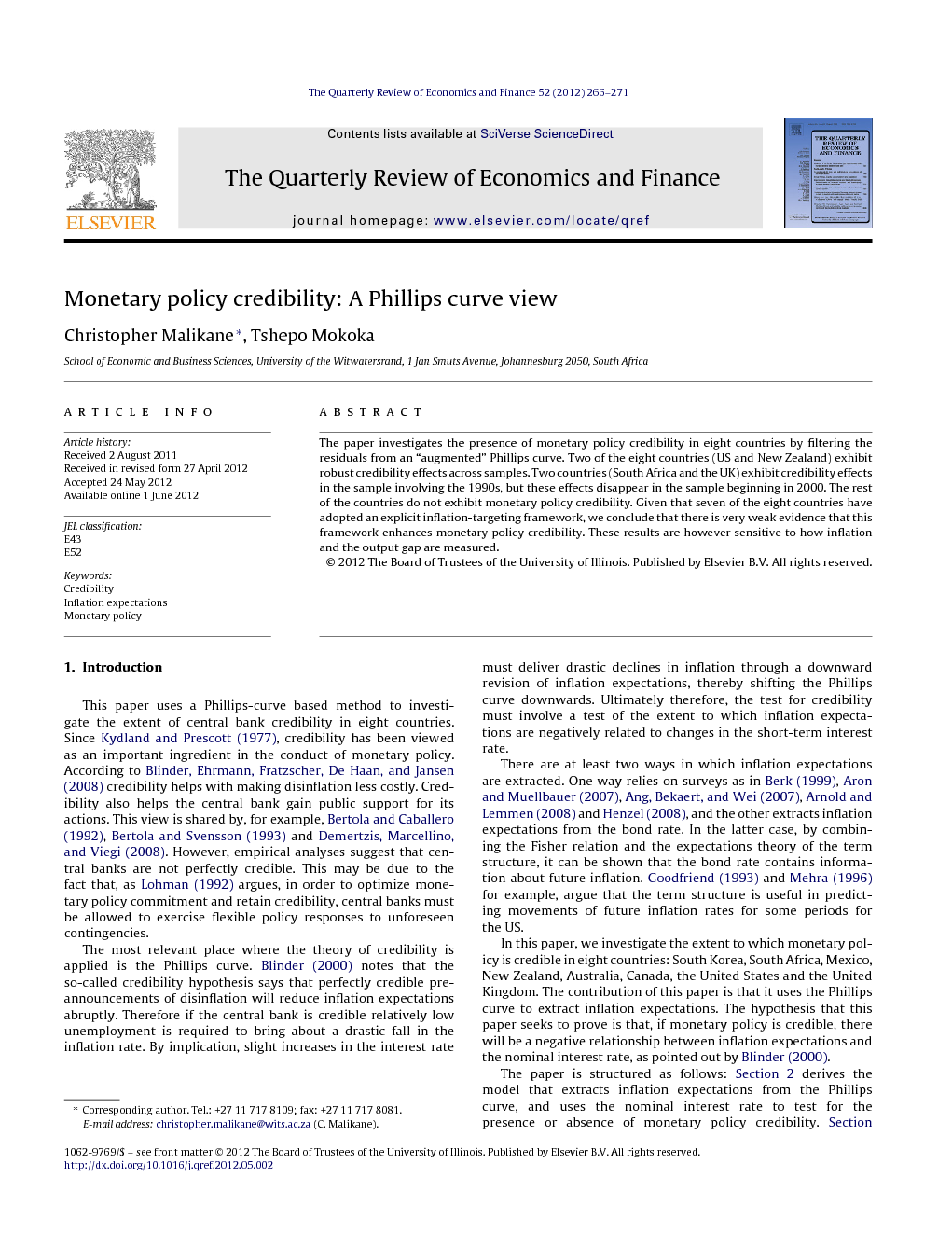 This paper uses a Phillips-curve based method to investigate the extent of central bank credibility in eight countries. Since Kydland and Prescott (1977), credibility has been viewed as an important ingredient in the conduct of monetary policy. According to Blinder, Ehrmann, Fratzscher, De Haan, and Jansen (2008) credibility helps with making disinflation less costly. Credibility also helps the central bank gain public support for its actions. This view is shared by, for example, Bertola and Caballero (1992), Bertola and Svensson (1993) and Demertzis, Marcellino, and Viegi (2008). However, empirical analyses suggest that central banks are not perfectly credible. This may be due to the fact that, as Lohman (1992) argues, in order to optimize monetary policy commitment and retain credibility, central banks must be allowed to exercise flexible policy responses to unforeseen contingencies. The most relevant place where the theory of credibility is applied is the Phillips curve. Blinder (2000) notes that the so-called credibility hypothesis says that perfectly credible pre-announcements of disinflation will reduce inflation expectations abruptly. Therefore if the central bank is credible relatively low unemployment is required to bring about a drastic fall in the inflation rate. By implication, slight increases in the interest rate must deliver drastic declines in inflation through a downward revision of inflation expectations, thereby shifting the Phillips curve downwards. Ultimately therefore, the test for credibility must involve a test of the extent to which inflation expectations are negatively related to changes in the short-term interest rate. There are at least two ways in which inflation expectations are extracted. One way relies on surveys as in Berk (1999), Aron and Muellbauer (2007), Ang, Bekaert, and Wei (2007), Arnold and Lemmen (2008) and Henzel (2008), and the other extracts inflation expectations from the bond rate. In the latter case, by combining the Fisher relation and the expectations theory of the term structure, it can be shown that the bond rate contains information about future inflation. Goodfriend (1993) and Mehra (1996) for example, argue that the term structure is useful in predicting movements of future inflation rates for some periods for the US. In this paper, we investigate the extent to which monetary policy is credible in eight countries: South Korea, South Africa, Mexico, New Zealand, Australia, Canada, the United States and the United Kingdom. The contribution of this paper is that it uses the Phillips curve to extract inflation expectations. The hypothesis that this paper seeks to prove is that, if monetary policy is credible, there will be a negative relationship between inflation expectations and the nominal interest rate, as pointed out by Blinder (2000). The paper is structured as follows: Section 2 derives the model that extracts inflation expectations from the Phillips curve, and uses the nominal interest rate to test for the presence or absence of monetary policy credibility. Section 3 provides empirical results of the tests and Section 4 concludes.