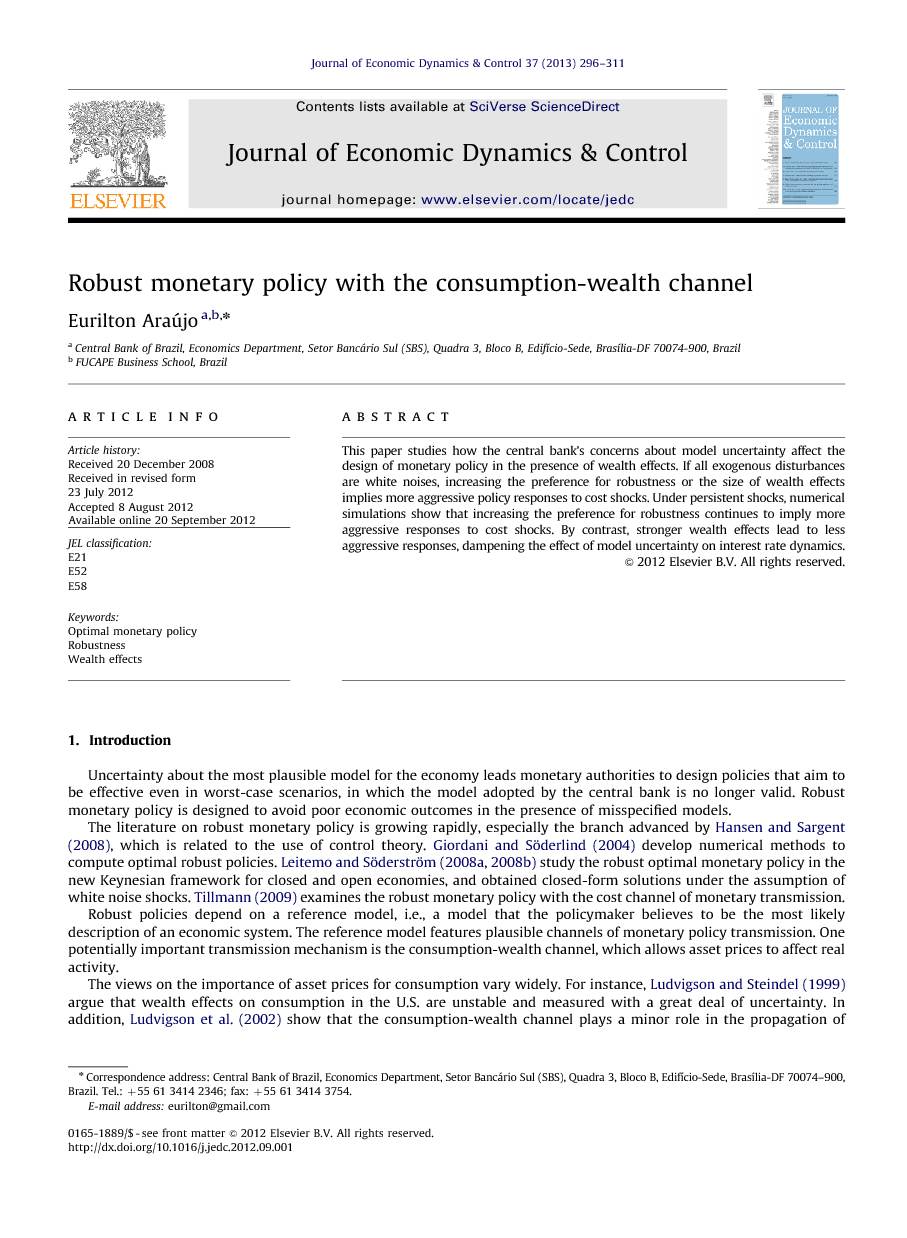 This paper studies how the central bank's concerns about model uncertainty affect the design of monetary policy in the presence of wealth effects. If all exogenous disturbances are white noises, increasing the preference for robustness or the size of wealth effects implies more aggressive policy responses to cost shocks. Under persistent shocks, numerical simulations show that increasing the preference for robustness continues to imply more aggressive responses to cost shocks. By contrast, stronger wealth effects lead to less aggressive responses, dampening the effect of model uncertainty on interest rate dynamics.

4. Conclusion In a simple overlapping generations model with sticky prices, I studied how optimal monetary policy is affected by the central bank's concerns about model uncertainty. The artificial economy considered allows monetary policy to be transmitted through the consumption-wealth channel. Consequently, equity prices become relevant for the behavior of the economy in response to monetary policy actions. This essay analyzed how the central bank's desire to be robust against model misspecification affects the behavior of the economy according to the importance of the size of the wealth effect. To be able to find closed-form solutions, paralleling Leitemo and Söderström, 2008a and Leitemo and Söderström, 2008b, I initially assumed that all shocks were white noises. Under the assumption of white noise disturbances, the robust policy always responds more aggressively to cost shocks than the non-robust policy. Consequently, inflation is less volatile in the approximating model while the output gap is more volatile. The preference for robustness does not affect the response to shocks to the natural level of output. In addition, equity prices become more sensitive to cost shocks, and as a consequence more volatile under the robust policy. Concerning the interaction between robustness and the size of wealth effects, monetary policy responses to cost shocks are even more aggressive if the consumption-wealth channel has an important role in the transmission mechanism. The output gap and equity prices become more volatile but the effect on inflation is ambiguous. I also showed that the monetary policy problem in the overlapping generations model is isomorphic to the same problem in a simple representative agent new Keynesian closed economy with the IS implied by logarithmic preferences, a more volatile Phillips curve disturbance and a larger output gap-inflation tradeoff. All these findings depend on the assumption of white noise disturbances. Under persistent shocks, I used numerical methods to solve the model. The solution shows that an increase in the preference for robustness also leads to more aggressive responses to cost shocks. In contrast, stronger wealth effects are associated with less aggressive responses. Thus, the presence of the consumption-wealth channel attenuates the effect of model uncertainty on monetary policy stance. If shocks are short-lived, the central bank can act more aggressively, since the impact of monetary policy on equity prices and the output gap will not depend on additional effects working through expectations. With persistent shocks, the effect of the shock itself and monetary policy actions taken today may have repercussions in the future. An aggressive response to cost shocks today may signal lower values for the output gap and dividends tomorrow, leading to a decline in equity prices, which in turn may depress the economy beyond the level compatible with the preference for output stabilization characterizing the central banker.