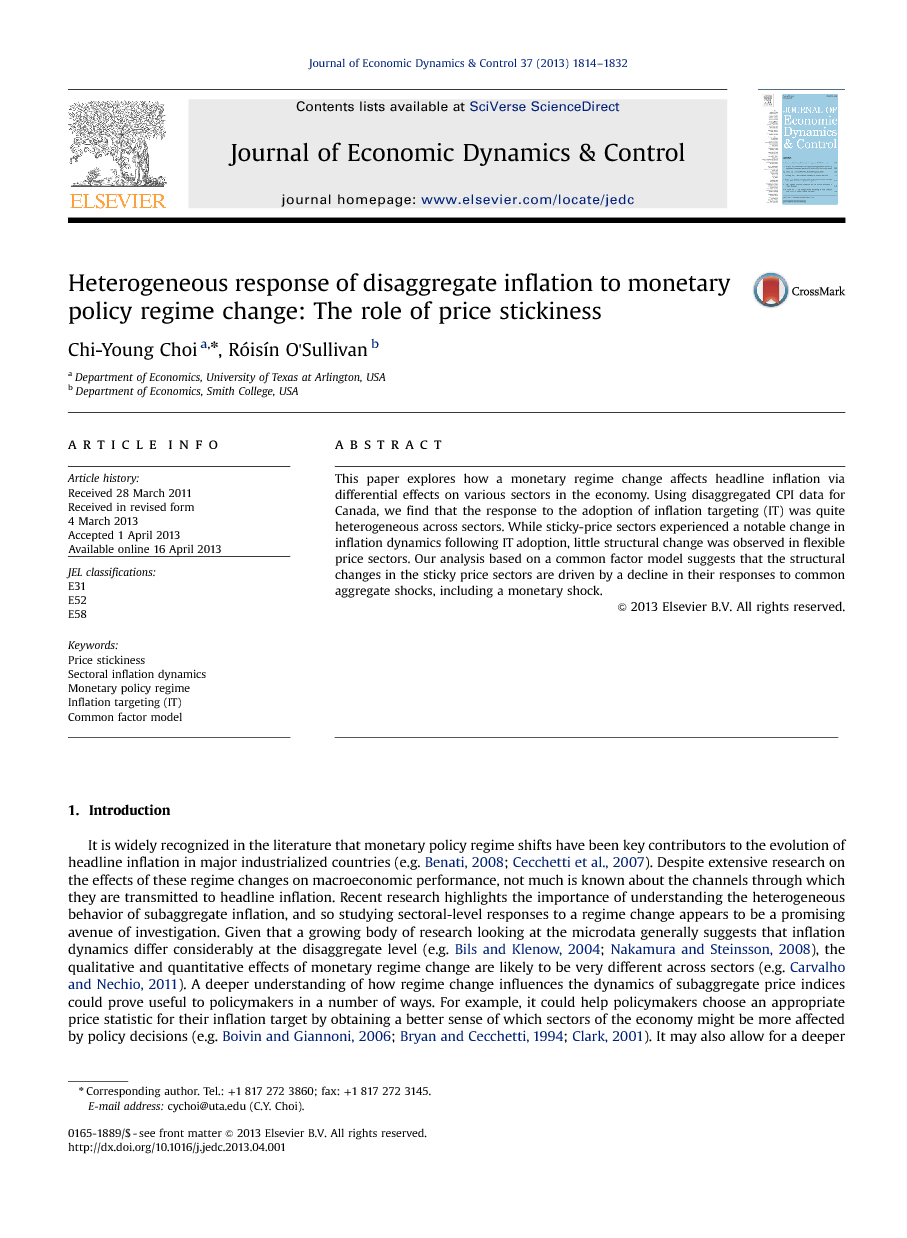 This paper explores how a monetary regime change affects headline inflation via differential effects on various sectors in the economy. Using disaggregated CPI data for Canada, we find that the response to the adoption of inflation targeting (IT) was quite heterogeneous across sectors. While sticky-price sectors experienced a notable change in inflation dynamics following IT adoption, little structural change was observed in flexible price sectors. Our analysis based on a common factor model suggests that the structural changes in the sticky price sectors are driven by a decline in their responses to common aggregate shocks, including a monetary shock.

In this study, we assess how a monetary policy regime change affects the behavior of headline inflation by focusing on the differential impact across sectors. Our study builds upon a couple of important strands in the empirical literature on inflation dynamics. One strand of the literature has provided pervasive evidence of structural changes in many macroeconomic series, including inflation, after changes in the monetary policy regime. In another, a growing consensus has emerged on the importance of disaggregate analysis in the study of inflation dynamics. Using disaggregate price data for Canada, we examined the impact of the adoption of IT on sectoral inflation dynamics. Our aims were to assess the subaggregate inflation responses to the adoption of IT and to identify the sectors of the economy that were more sensitive to the change in the monetary regime. We found substantial heterogeneity in the responses of sectoral inflation rates, with a pronounced difference in the responses between the sectors in which prices are adjusted infrequently and the sectors with greater price flexibility. The influence of the policy regime change is felt predominantly in the sticky-price sectors of the economy, where firms are more forward looking and hence more responsive to changes affecting inflation expectations. By decomposing the fluctuations in sectoral inflation into a common and a sector-specific component, we also found that one common factor explained about 10% of the variance of sectoral inflation. More importantly, the common component share has declined dramatically after IT adoption, mainly driven by sectoral inflation in the sticky price sectors. Given that the common factor captures aggregate shocks, such as a monetary regime change, and that the dynamics implied by the common factor mimic very closely the dynamics of short-run interest rates, we share the view of Boivin et al. (2009) that monetary policy regime change is likely responsible for the change in the dynamics of sectoral inflation. Knowledge about the sources of the heterogeneity observed between the sticky-price and flexible-price sectors can be used to guide policymakers when formulating their communication policy, which is an essential tool for effective management of inflation expectations. For countries considering a change to their monetary policy framework, our findings suggest that their ability to predict the impact of the new regime and successfully design a transition to that regime could be enhanced by taking into account the sectoral composition of their economy. For example, if a country is thinking about specifying a numerical target for inflation and its headline inflation rate gives substantial weight to sectors with greater price flexibility, it may need to consider a wider range than normal for its target. This may be a particularly important issue for less-developed countries in which primary resources, whose prices are usually more flexible and thus more volatile, often constitute a larger share of the economy. While this study unveils several interesting findings, as with any analysis of this kind, it leaves many questions for future research. One potentially fruitful avenue to pursue concerns further exploration of the role of price stickiness in relation to the so-called exchange-rate pass-through (ERPT). Another path might be to examine additional potential sources of the heterogeneity in the responsiveness across the sectors within each price-stickiness category, such as the share of imported content in the goods produced, or the breakdown between durable goods, non-durable goods and services. The current study leaves no doubt that a change in the framework governing macroeconomic policy affects various sectors of the economy differently, opening up many interesting related questions.