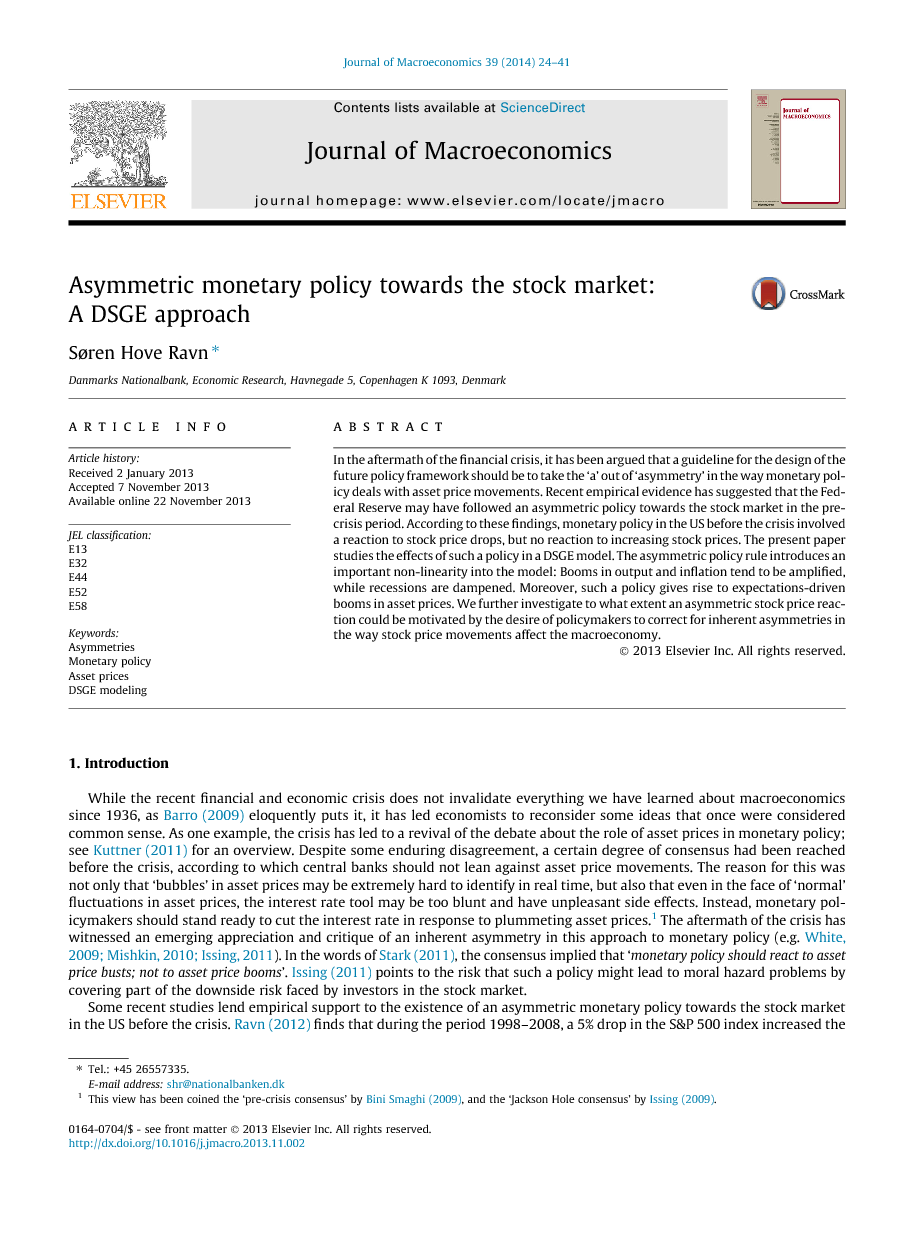 In the aftermath of the financial crisis, it has been argued that a guideline for the design of the future policy framework should be to take the ‘a’ out of ‘asymmetry’ in the way monetary policy deals with asset price movements. Recent empirical evidence has suggested that the Federal Reserve may have followed an asymmetric policy towards the stock market in the pre-crisis period. According to these findings, monetary policy in the US before the crisis involved a reaction to stock price drops, but no reaction to increasing stock prices. The present paper studies the effects of such a policy in a DSGE model. The asymmetric policy rule introduces an important non-linearity into the model: Booms in output and inflation tend to be amplified, while recessions are dampened. Moreover, such a policy gives rise to expectations-driven booms in asset prices. We further investigate to what extent an asymmetric stock price reaction could be motivated by the desire of policymakers to correct for inherent asymmetries in the way stock price movements affect the macroeconomy.

The present paper provides some theoretical inputs to the recent debate concerning a potentially asymmetric reaction of monetary policy to stock prices. We demonstrate that an asymmetric policy towards the stock market will translate into an asymmetric business cycle. Booms in output following expansionary shocks will tend to be amplified, while recessions will be dampened. A similar pattern emerges for inflation. This could be motivated by assuming that the desire of the policymaker is to minimize an asymmetric loss function, or by the existence of other asymmetries in the economy. We show that if the financial accelerator or the stock wealth effect is assumed to be non-linear over the business cycle, an asymmetric monetary policy can obtain symmetric outcomes in response to supply shocks, but only partly alleviate such asymmetries after demand shocks. The magnitude of the asymmetric policy reaction found in recent empirical studies is rather small, and our analysis shows that its quantitative impact on the macroeconomy is limited. This is especially the case when economic fluctuations are driven by technology shocks. The asymmetric policy exerts a small additional effect on movements in output and inflation. It also does not lead to problems of equilibrium indeterminacy. Although an asymmetric policy reaction to stock prices might be useful in order to eliminate or mitigate other asymmetries, it also implies a risk of creating moral hazard problems by effectively insulating stock market investors from part of their downside risk. As a matter of fact, this has been at the heart of the critique of the pre-crisis consensus and the plea to take the ‘a’ out of ‘asymmetry’ in the policy approach to asset prices (Mishkin, 2010 and Issing, 2011). The potential moral hazard problems of an asymmetric monetary policy towards the stock market was already analyzed by Miller et al. (2001). In the present paper, this issue is linked to the anticipation boom in asset prices that arises following expansionary shocks as a result of the asymmetric policy. However, we have not attempted to analyze the potential moral hazard problems in detail. A comprehensive study of how an asymmetric monetary policy can cause moral hazard problems by distorting the incentives of the individual investor would require an even richer microfoundation than that of the present paper, explicitly modeling the investment decision. While this is surely an interesting idea for future research, it is beyond the scope of this paper. The present paper follows most of the modern macroeconomic literature by log-linearizing the equilibrium conditions around a steady state. Thus, by construction, the economy eventually returns to the same steady state following a shock. This inherent limitation implies that it is not possible to study whether the asymmetric policy might push the economy to a new steady state. For example, if economic booms are consistently stronger and longer than recessions, as suggested by the impulse responses, one would eventually expect a ‘level’ effect on output. Another question is whether the asymmetric policy will sooner or later drive the interest rate to its zero lower bound. Due to the limitations of the log-linear approach, the model above does not have much to say about such issues.