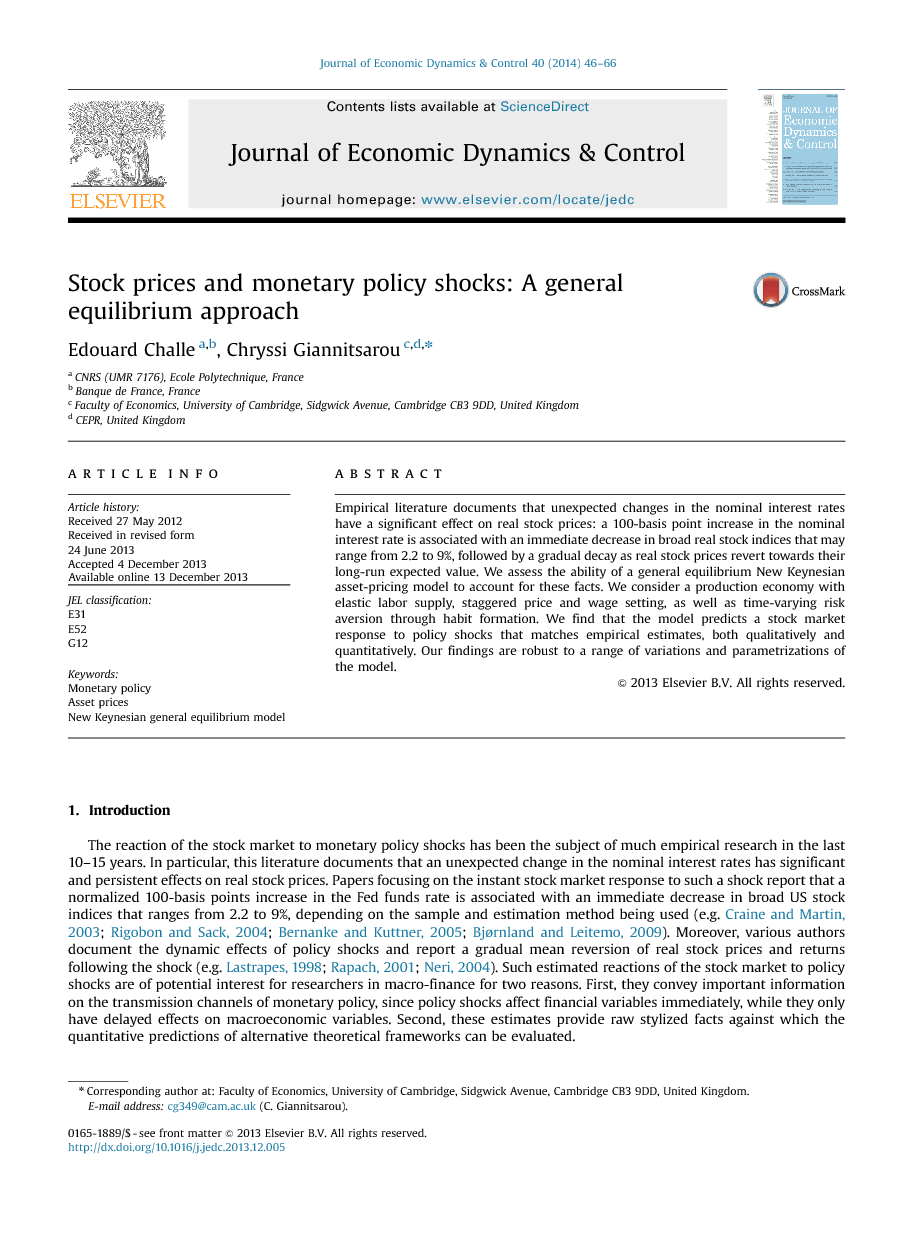 Empirical literature documents that unexpected changes in the nominal interest rates have a significant effect on real stock prices: a 100-basis point increase in the nominal interest rate is associated with an immediate decrease in broad real stock indices that may range from 2.2 to 9%, followed by a gradual decay as real stock prices revert towards their long-run expected value. We assess the ability of a general equilibrium New Keynesian asset-pricing model to account for these facts. We consider a production economy with elastic labor supply, staggered price and wage setting, as well as time-varying risk aversion through habit formation. We find that the model predicts a stock market response to policy shocks that matches empirical estimates, both qualitatively and quantitatively. Our findings are robust to a range of variations and parametrizations of the model.

The motivation behind our work comes from recent literature that documents the effects of unexpected monetary policy on the stock market. We ask and assess whether a basic DSGE model with New Keynesian features can account for the now well documented response of the stock market to changes in the nominal interest rate by the Central Bank, both qualitatively and quantitatively. The model we considered is the simplest possible version of a New Keynesian framework that may have the ability to explain such facts: building on the basic New Keynesian model of Woodford (2003), we assumed that both prices and wages were sticky (with sticky wages ensuring that dividends are procyclical) and that households formed consumption habits (so that risk aversion was time-varying). The model was then augmented in a natural way with a financial market, which we analyzed in detail in order to address our asset pricing questions. The model was then parameterized in line with the business cycle literature, i.e. so that it generated commonly accepted dynamics for the main macroeconomic aggregates. Our findings can be summarized as follows. On one hand, the model succeeds in matching the main empirical fact that we wish to capture, i.e. the instantaneous response of the stock market to a surprise increase in the Fed funds rate and this result is robust to simple variations and parametrizations of the model. On the other hand, when attempting to break down the impact of unexpected monetary policy on the stock price to the three relevant channels (i.e. dividends, real interest rates and ex-ante excess returns), we find the relative contribution of real interest rates to the total impact on real stock prices to be larger than what some empirical studies have documented. We attribute this to (i) the slow mean reversion of real interest rates predicted by New Keynesian models and (ii) the smoothness of the endogenous consumption process under habit formation. What can we learn from this analysis? First, we propose a mechanism for generating this interesting asset pricing fact in the context of a general equilibrium business cycle model. Given the general difficulty in reconciling the business cycle and asset pricing literatures, we believe that our paper goes a rather long way in understanding the links and interactions between monetary policy and the stock market. Our analysis thus provides a platform for further research that would seek to improve our understanding of how different factors may affect these links. Second, an interesting by-product of our analysis is that the methodology for deriving present value expressions for the asset prices preserves some of the valuable second order information that is usually lost when linearizing dynamic systems. Although the methodology described here is particular to our New Keynesian framework, we conjecture that it can be easily applied to other settings.