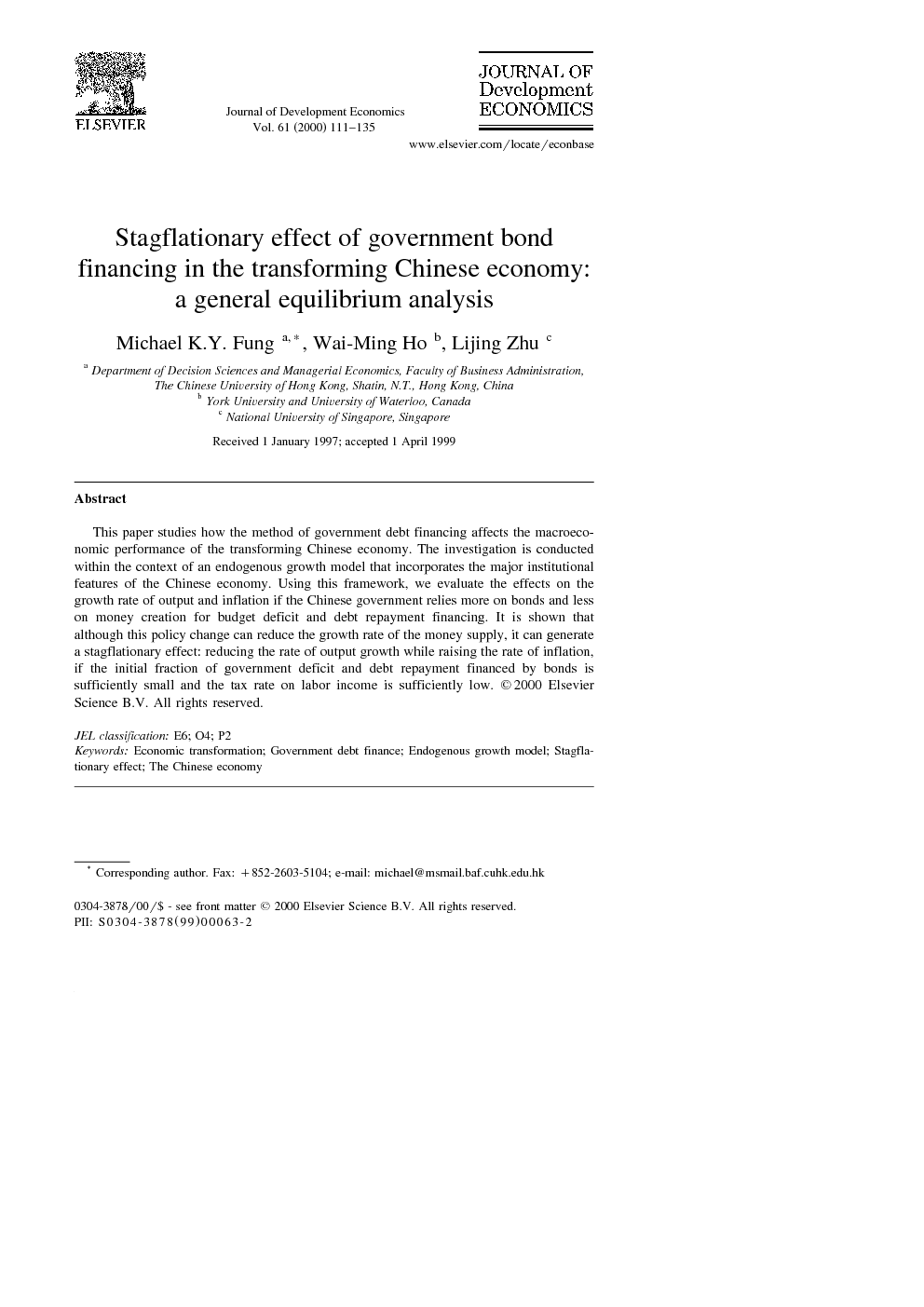 This paper studies how the method of government debt financing affects the macroeconomic performance of the transforming Chinese economy. The investigation is conducted within the context of an endogenous growth model that incorporates the major institutional features of the Chinese economy. Using this framework, we evaluate the effects on the growth rate of output and inflation if the Chinese government relies more on bonds and less on money creation for budget deficit and debt repayment financing. It is shown that although this policy change can reduce the growth rate of the money supply, it can generate a stagflationary effect: reducing the rate of output growth while raising the rate of inflation, if the initial fraction of government deficit and debt repayment financed by bonds is sufficiently small and the tax rate on labor income is sufficiently low.

Chinese economic reforms have achieved a remarkable success. In the past 19 years, while undergoing a fundamental transformation, China's GNP grew at an average annual rate close to 10%; and, as casual observation suggests, the living standard of ordinary people improved considerably.29 However, the reform process has not been a smooth one. Rapid economic growth was accompanied by several cyclical fluctuations. At times, the burst of double-digit inflation forced the Chinese government to slow down the pace of reforms.30 How to maintain macroeconomic stability while retaining the impressive growth performance so as to push the reforms further has become the principal concern for the Chinese government. Given the sheer size of the Chinese economy and its perceived potential, this issue has naturally attracted wide attention from economists in the west. Discussions have been generated and policy evaluations offered (McKinnon, 1991a and McKinnon, 1991b; Naughton, 1991 and Naughton, 1995; Yusuf, 1994; Brandt and Zhu, 1995). In this paper, we investigate the effect on the rate of output growth and inflation if the Chinese government uses more bonds and thus less money creation to finance its budget deficit and debt repayment so as to control inflation. It is shown that although financing government debt through more bonds can reduce the growth rate of the money supply, it may generate a stagflationary effect: reducing the rate of output growth while raising the rate of inflation. As such, our result provides a possible explanation for the stagflationary phenomenon experienced in China during the 1993–1995 period. Clearly, the derivation of the possible explanation depends critically on our model specification, which reflects the channels of influence we want to highlight. The Chinese economy differs from the advanced market economies in two significant ways. First, it has a dual structure consisting of the state and non-state sectors. Because it is state-owned, the state sector enjoys the advantage of being subsidized for its inefficient investment and production. Second, by maintaining tight control over the financial sector, the government plays a key role in the allocation of financial resources in the economy, regulating interest rates on the financial assets, setting the quantity of bonds available to the public, and determining the allocation of bank loans. Because of the incorporation of the first feature, the government deficit is endogenously determined in our model. As a result, a change in the method of government debt financing may enlarge or reduce the ratio of government fiscal burden to the output level of the economy. Since the productivity levels of these two sectors are different, a change in the financing method will lead to a resource reallocation between the private sector and the state sector and thus, exert real effects on the economy. Moreover, given that in the standard model the rates of return on financial assets and capital investment are determined by market forces, changes in the supplies of money and bonds will affect the market rates of return on different assets and generate portfolio substitution effects. However, in our model, due to government monopolization, interest rates on government bonds, bank deposits, and bank loans are regulated by the government. Thus, the adjustment of individuals' portfolios is not induced by changes in interest rates, instead, it is because of quantity rationing. Consequently, in our model, changes in the method of government debt financing will affect the macroeconomic performance in a different manner than that in the standard model.