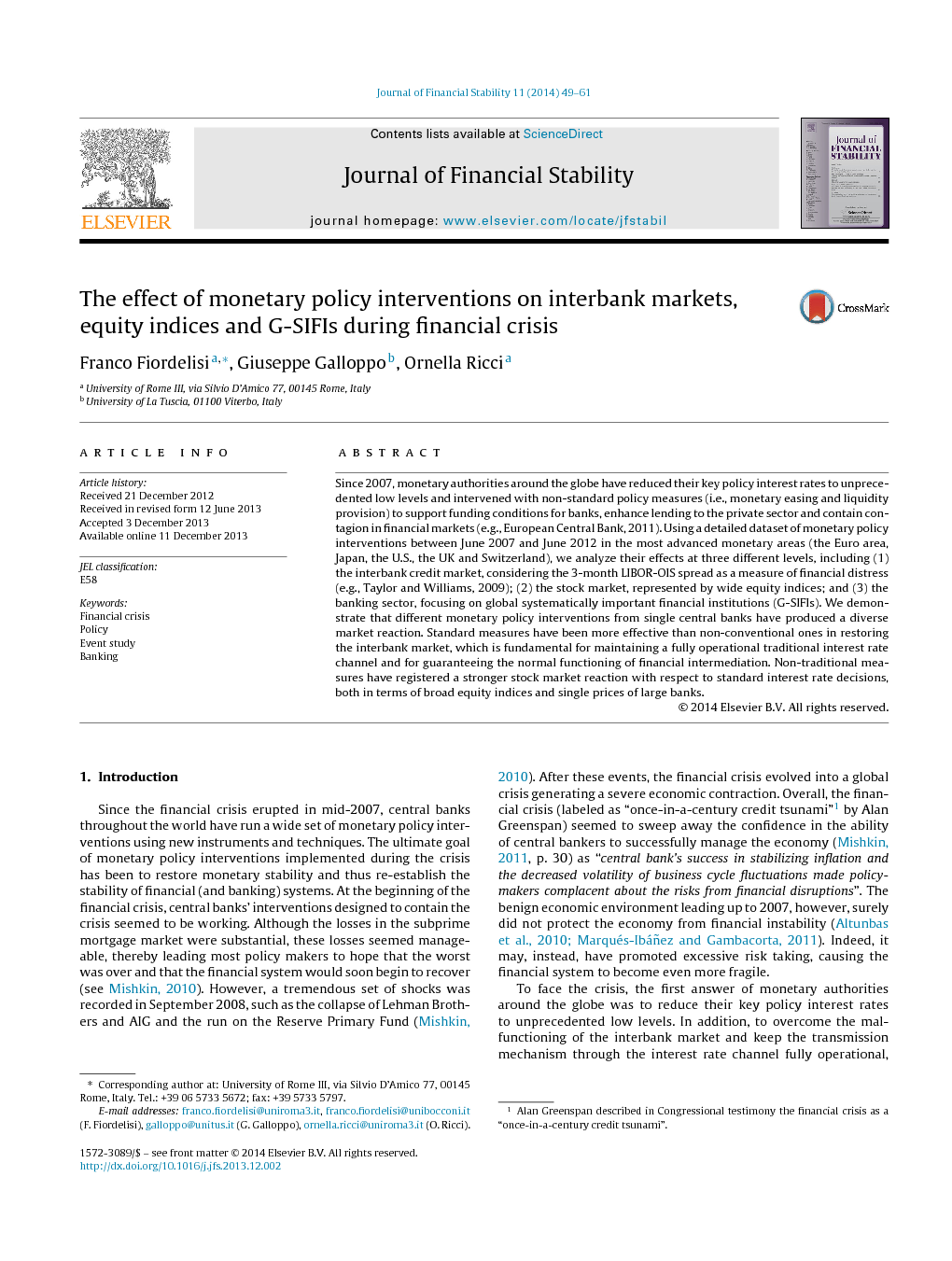 Since 2007, monetary authorities around the globe have reduced their key policy interest rates to unprecedented low levels and intervened with non-standard policy measures (i.e., monetary easing and liquidity provision) to support funding conditions for banks, enhance lending to the private sector and contain contagion in financial markets (e.g., European Central Bank, 2011). Using a detailed dataset of monetary policy interventions between June 2007 and June 2012 in the most advanced monetary areas (the Euro area, Japan, the U.S., the UK and Switzerland), we analyze their effects at three different levels, including (1) the interbank credit market, considering the 3-month LIBOR-OIS spread as a measure of financial distress (e.g., Taylor and Williams, 2009); (2) the stock market, represented by wide equity indices; and (3) the banking sector, focusing on global systematically important financial institutions (G-SIFIs). We demonstrate that different monetary policy interventions from single central banks have produced a diverse market reaction. Standard measures have been more effective than non-conventional ones in restoring the interbank market, which is fundamental for maintaining a fully operational traditional interest rate channel and for guaranteeing the normal functioning of financial intermediation. Non-traditional measures have registered a stronger stock market reaction with respect to standard interest rate decisions, both in terms of broad equity indices and single prices of large banks.

Since the financial crisis erupted in mid-2007, central banks throughout the world have run a wide set of monetary policy interventions using new instruments and techniques. The ultimate goal of monetary policy interventions implemented during the crisis has been to restore monetary stability and thus re-establish the stability of financial (and banking) systems. At the beginning of the financial crisis, central banks’ interventions designed to contain the crisis seemed to be working. Although the losses in the subprime mortgage market were substantial, these losses seemed manageable, thereby leading most policy makers to hope that the worst was over and that the financial system would soon begin to recover (see Mishkin, 2010). However, a tremendous set of shocks was recorded in September 2008, such as the collapse of Lehman Brothers and AIG and the run on the Reserve Primary Fund (Mishkin, 2010). After these events, the financial crisis evolved into a global crisis generating a severe economic contraction. Overall, the financial crisis (labeled as “once-in-a-century credit tsunami”1 by Alan Greenspan) seemed to sweep away the confidence in the ability of central bankers to successfully manage the economy (Mishkin, 2011, p. 30) as “central bank's success in stabilizing inflation and the decreased volatility of business cycle fluctuations made policymakers complacent about the risks from financial disruptions”. The benign economic environment leading up to 2007, however, surely did not protect the economy from financial instability ( Altunbas et al., 2010 and Marqués-Ibáñez and Gambacorta, 2011). Indeed, it may, instead, have promoted excessive risk taking, causing the financial system to become even more fragile. To face the crisis, the first answer of monetary authorities around the globe was to reduce their key policy interest rates to unprecedented low levels. In addition, to overcome the malfunctioning of the interbank market and keep the transmission mechanism through the interest rate channel fully operational, they intervened with a number of non-standard policy measures, such as monetary easing and liquidity provision. Non-standard measures aimed to support funding conditions for banks, to enhance lending to the private sector, and to contain contagion in financial markets were implemented (e.g., ECB, 2011). In this framework, our paper aims to answer the following central questions. (1) Which monetary policy interventions are more effective in restoring the normal functioning of the interbank market? (2) What is the effect of monetary policy interventions on equity markets? (3) What is the effect of monetary policy interventions on the stock prices of banks? Specifically, we select a wide set of monetary policy interventions between June 1st, 2007 and June 30th, 2012, and we then estimate the market reaction around their announcement by focusing on three levels. Consistent with extant literature (e.g., Thorbecke, 1997, Ehrmann and Fratzscher, 2004, Bernanke et al., 2004, Gagnon et al., 2011 and Swanson et al., 2011), we assess the effect of each monetary policy intervention by adopting an event study methodology. As outlined in Gagnon et al. (2011), the underlying assumption in such studies is that markets are efficient in the sense that all of the intervention's effects occur when investors update their expectations, not when actual measures occur. As a consequence and as highlighted in Swanson et al. (2011), a one- or two-day estimation window around a major macroeconomic announcement is sufficient to provide an unbiased estimate of the complete effect of that announcement. First, we estimate the impact on the 3-month LIBOR-OIS spread, consistent with Aït-Sahalia et al. (2012) as they estimate the impact on the interbank and liquidity risk premia. With respect to their study, this paper analyzes a much longer time interval (i.e., considering also the sovereign debt crisis). In addition, we measure a wider system effect with a focus on stock markets. To this aim, we first concentrate on broad equity indices (MSCI Switzerland, MSCI Japan, MSCI EMU, MSCI UK and MSCI USA) to capture the stock market in each monetary area (Switzerland, Japan, Euro area, the UK and the U.S., respectively). Second, we measure the impact on the stock returns of the 27 worldwide global systemically important financial institutions (G-SIFIs), as released by the Financial Stability Board on 4th November 2011. The remainder of the paper is organized as follows: Section 2 provides a review of past literature and outlines the contribution of the paper; Section 3 describes the collection and classification of monetary policy interventions over the investigated period; Section 4 is devoted to the event study methodology applied to measure market reactions; Section 5 presents and discusses our main results. Finally, in Section 6 we draw our conclusions, outlining the limitations of this work and some directions for future research.

Our paper analyzes the market reaction to various monetary policy interventions undertaken during the financial crisis. Specifically, we selected a wide set of monetary policy measures enacted between June 1st, 2007 and June 30th, 2012. First, we measure the change in the three-month LIBOR-OIS spread to replicate the study of Aït-Sahalia et al. (2012), estimating the impact on interbank and liquidity risk premia over a longer time interval (i.e., considering also the sovereign debt crisis). With reference to the LIBOR-OIS spread, our findings substantially confirm the finding of Aït-Sahalia et al. (2012). That is, while policy rates were effective tool during the financial crisis, it has been more difficult to assess the impact of non-conventional measures. Furthermore, when we focus on stock markets, we find quite different results. We show that monetary expansionary measures have a positive effect on stock markets, while policy inaction and restrictive measures have a negative effect. Among the expansionary measures, interest rate cuts and monetary easing actions do not produce a statistically significant effect on broad equity indices, while we find positive and statistically significant CAARs around the announcement of liquidity provisions. Overall, we find that central banks’ decisions to change interest rates produce a statistically significant market reaction only in the cases of unchanging or increasing interest rates, not in decreasing interest rates. Furthermore, central banks’ interventions on liquidity are effective only in the case of liquidity provisions, not in the case of reductions. By distinguishing the three stages of the financial crisis, expansionary measures (but not policy inaction or restrictive measures) are found to be effective during the subprime crisis and the global financial crisis, while policy inaction and restrictive measures (but not expansionary measures) are effective during the sovereign debt crisis. Overall, our results suggest that broad equity indices have benefited more from liquidity provision than from interest rate cuts. There are several possible explanations for this finding. One possible explanation is that interest rates have progressively reached levels near the zero lower bound, thereby restricting margins for effective traditional interventions. Second, in a period where the interbank market malfunctions or it is difficult to arrange funding for banks, liquidity injections may favor the extension of credit to non-financial firms in a more effective way than a decrease in interest rates. Finally, focusing on the effect of different monetary policy announcements for the 27 worldwide G-SIFIs, we find a strong positive reaction for monetary easing programs. Conversely, liquidity provision (LIQ+) and liquidity drain or end/reduction (CONTR) are not associated to statistically significant stock price reactions for G-SIFIs. These findings are an indication that investors view central banks’ monetary easing interventions as being focused on banks rather than as an expansionary initiative for the whole economy. In addition, observing that for single G-SIFIs the reaction is particularly strong and positive for monetary easing programs gives a possible signal of their effectiveness in improving funding conditions for banks. We acknowledge some limitations with our analysis that suggest some interesting directions for future research. First, we adopt an event study methodology that has the advantages of simplicity and parsimony as it is designed to work with a limited number of observations and to avoid the problem of possible wrong regression model specification. Nevertheless, even though we apply some criteria to address the problem of overlapping events, it is not possible to completely exclude the presence of some confounding effects. Because the number of monetary policy announcements is significantly large and, quite often, the same type of intervention is made in the same period in different countries, we do not feel confident to assess spillover effects, even though we are aware that this would be an important extension of the analysis by providing useful insights for the European debt crisis (e.g., how do events in the Euro area affect other currency areas). This problem is augmented by the fact that we cover only monetary policy decisions and do not consider the effect of other policy interventions (e.g., fiscal policy), which were also frequent throughout the analyzed period. In addition, it may be interesting to investigate whether the effect on G-SIFIs depends on some characteristics of the bank, e.g., its capital strength or the composition of its liabilities. Further research should be conducted to enlarge the database to other policy interventions and investigate the determinants of the reaction by different G-SIFIs. In conclusion, we hope that this study serves as a valid contribution to the literature on policy response to the financial crisis and contributes to a better understanding of the effect of various interventions on the financial market.