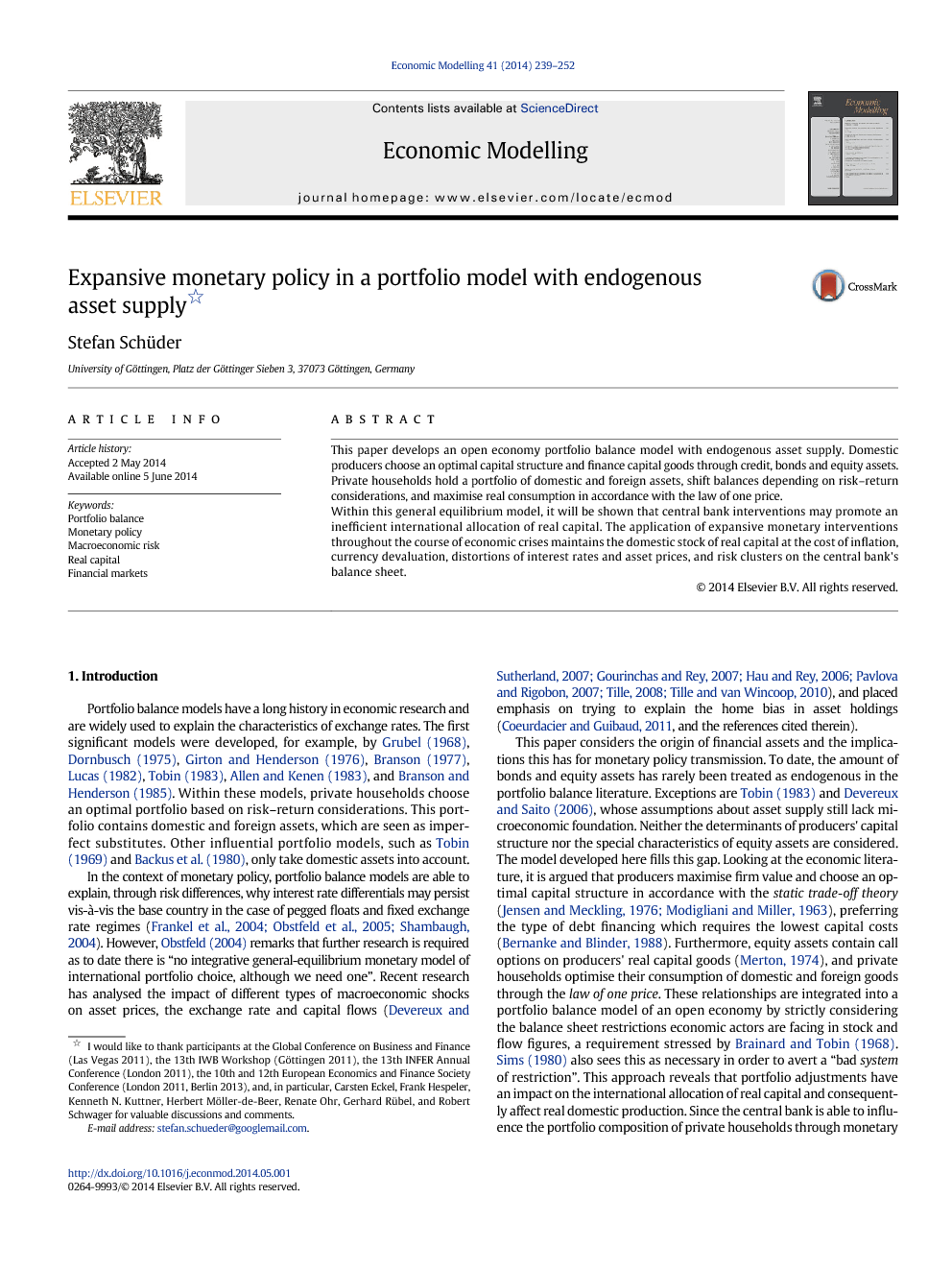 This paper develops an open economy portfolio balance model with endogenous asset supply. Domestic producers choose an optimal capital structure and finance capital goods through credit, bonds and equity assets. Private households hold a portfolio of domestic and foreign assets, shift balances depending on risk–return considerations, and maximise real consumption in accordance with the law of one price. Within this general equilibrium model, it will be shown that central bank interventions may promote an inefficient international allocation of real capital. The application of expansive monetary interventions throughout the course of economic crises maintains the domestic stock of real capital at the cost of inflation, currency devaluation, distortions of interest rates and asset prices, and risk clusters on the central bank's balance sheet.

Portfolio balance models have a long history in economic research and are widely used to explain the characteristics of exchange rates. The first significant models were developed, for example, by Grubel (1968), Dornbusch (1975), Girton and Henderson (1976), Branson (1977), Lucas (1982), Tobin (1983), Allen and Kenen (1983), and Branson and Henderson (1985). Within these models, private households choose an optimal portfolio based on risk–return considerations. This portfolio contains domestic and foreign assets, which are seen as imperfect substitutes. Other influential portfolio models, such as Tobin (1969) and Backus et al. (1980), only take domestic assets into account. In the context of monetary policy, portfolio balance models are able to explain, through risk differences, why interest rate differentials may persist vis-à-vis the base country in the case of pegged floats and fixed exchange rate regimes (Frankel et al., 2004, Obstfeld et al., 2005 and Shambaugh, 2004). However, Obstfeld (2004) remarks that further research is required as to date there is “no integrative general-equilibrium monetary model of international portfolio choice, although we need one”. Recent research has analysed the impact of different types of macroeconomic shocks on asset prices, the exchange rate and capital flows (Devereux and Sutherland, 2007, Gourinchas and Rey, 2007, Hau and Rey, 2006, Pavlova and Rigobon, 2007, Tille, 2008 and Tille and van Wincoop, 2010), and placed emphasis on trying to explain the home bias in asset holdings (Coeurdacier and Guibaud, 2011, and the references cited therein). This paper considers the origin of financial assets and the implications this has for monetary policy transmission. To date, the amount of bonds and equity assets has rarely been treated as endogenous in the portfolio balance literature. Exceptions are Tobin (1983) and Devereux and Saito (2006), whose assumptions about asset supply still lack microeconomic foundation. Neither the determinants of producers' capital structure nor the special characteristics of equity assets are considered. The model developed here fills this gap. Looking at the economic literature, it is argued that producers maximise firm value and choose an optimal capital structure in accordance with the static trade-off theory ( Jensen and Meckling, 1976 and Modigliani and Miller, 1963), preferring the type of debt financing which requires the lowest capital costs ( Bernanke and Blinder, 1988). Furthermore, equity assets contain call options on producers' real capital goods ( Merton, 1974), and private households optimise their consumption of domestic and foreign goods through the law of one price. These relationships are integrated into a portfolio balance model of an open economy by strictly considering the balance sheet restrictions economic actors are facing in stock and flow figures, a requirement stressed by Brainard and Tobin (1968). Sims (1980) also sees this as necessary in order to avert a “bad system of restriction”. This approach reveals that portfolio adjustments have an impact on the international allocation of real capital and consequently affect real domestic production. Since the central bank is able to influence the portfolio composition of private households through monetary interventions, the central bank has an indirect impact on the real economy. This impact needs to be considered if monetary policy interventions are to be comprehensively analysed. Therefore, it is advisable to endogenise the domestic asset supply, as is done in this paper. The paper is structured as follows; the general model framework is discussed in Section 2, followed by a definition of the model assumptions. Thereupon, the model is solved and the different transmission channels of exogenous shocks are presented in Section 3. In Section 4, the trade-offs involved with expansive monetary policy interventions are analysed. Reasons as to why simplifications do not reduce the general validity of the model are reconsidered in Section 5, and the results are summarised in Section 6.

The presented model expands upon the existing portfolio balance framework through consideration of an endogenous asset supply. Furthermore, it accounts for all balance restrictions concerning the economic actors analysed and the balance of payments. Domestic private households optimise their portfolio composition following Markowitz's portfolio selection and maximise real consumption with respect to the law of one price. Domestic producers optimise their capital structure following the static trade-off theory and show arbitrage behaviour in the choice of debt capital. Within the model, it becomes clear how the international allocation of real capital, asset prices, and the exchange rate is affected by external variables and monetary policy interventions. Expansive monetary interventions may avert real domestic disinvestment, which is caused by a relative increase in domestic macroeconomic risk in times of economic crisis, due to the ‘risk-taking channel’ of monetary policy (Borio and Zhu, 2008) and thereby stabilise real domestic production. Even though the impacts of open market purchases of domestic bonds and the expansion of credit lending are identical in the long term, bond purchases are expected to be more effective at the zero lower bound of interest rates. The drawbacks of expansive monetary interventions are that they give rise to risk clusters on the central bank's balance sheet, distortions of domestic interest rates and asset prices, increases in the domestic price level, and domestic currency devaluation. It was furthermore shown that empirical studies about the impact of the recent quantitative easing interventions on financial markets and the real economy (Bridges and Thomas, 442, Gagnon et al., 2011, Joyce et al., 2011 and Kapetanios et al., 2012) support these theoretical results. Crucial is that central bank interventions may promote an inefficient international allocation of real capital. If relative risk increases, the relative advantage of domestic investment is altered, and correspondingly, adjustments in the stocks of domestic and foreign real capital become appropriate. Through expansive monetary interventions, the central bank can prevent these adequate adjustments from occurring. The result is an inefficient international allocation of real capital such that the aggregate real global production is produced with a higher than necessary risk–return ratio. Overall, this has negative implications for global welfare. From this point forward, more research is needed to analyse the impact of the central bank's asset structure on domestic macroeconomic risk. Moreover, the central bank's influence on real capital allocation could even be positive in certain situations, especially if the presence of foreign actors or transaction costs is taken into consideration. In general, monetary policy is associated with trade-offs, both domestically and internationally. Therefore, it is advisable to thoroughly evaluate the welfare impact of central bank interventions through a holistic and internationally coordinated political process. This, in turn, allows for potentially diverse domestic and foreign interests to be equally taken into account.