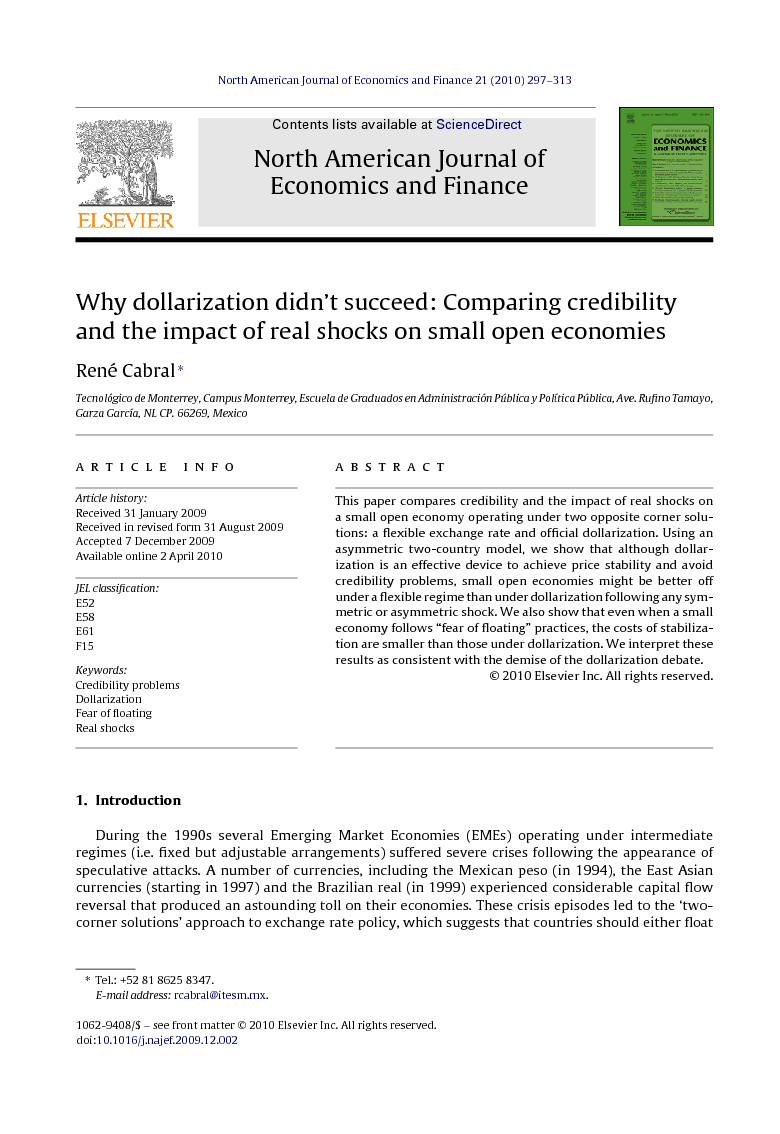 This paper compares credibility and the impact of real shocks on a small open economy operating under two opposite corner solutions: a flexible exchange rate and official dollarization. Using an asymmetric two-country model, we show that although dollarization is an effective device to achieve price stability and avoid credibility problems, small open economies might be better off under a flexible regime than under dollarization following any symmetric or asymmetric shock. We also show that even when a small economy follows “fear of floating” practices, the costs of stabilization are smaller than those under dollarization. We interpret these results as consistent with the demise of the dollarization debate.

During the 1990s several Emerging Market Economies (EMEs) operating under intermediate regimes (i.e. fixed but adjustable arrangements) suffered severe crises following the appearance of speculative attacks. A number of currencies, including the Mexican peso (in 1994), the East Asian currencies (starting in 1997) and the Brazilian real (in 1999) experienced considerable capital flow reversal that produced an astounding toll on their economies. These crisis episodes led to the ‘two-corner solutions’ approach to exchange rate policy, which suggests that countries should either float freely or implement a strong (non-adjustable) pegged regime in order to avoid credibility problems.1 The logic for the two-corner solution is that, to prevent speculation, policymakers should give a clear signal that they will avoid market intervention by allowing their currencies to float freely or by giving up monetary independence altogether. As the two-corner solutions approach to the exchange rate became more popular, many small and not-so-small open economies were encouraged to move into the firm-fix corner under the argument that they had little ability to manage their own monetary policy. Particularly in Latin America, official dollarization suddenly appeared as the ‘rational choice’ for those small open economies for which, according to Salvatore (2001), “the US is their dominant economic partner and which have a poor monetary performance, and hence have low economic-policy credibility”.2 Following this recommendation, Ecuador and El Salvador adopted the US dollar as their own currency in 2000 and 2001, respectively; aiming to gain credibility, stabilize their economies against high rates of inflation, prevent speculation and avoid economic crises.3 In spite of the support that the regimes in the firm-fix corner have received, not everyone has welcomed the view that a pegged regime, such as dollarization, is preferable to a flexible one. Critics of dollarization argue that, due to the lack of an independent monetary policy, the ability of a country to react to asymmetric shocks is greatly reduced under a dollarized regime. They also claim that this happens because, in the presence or absence of economic shocks, the US monetary authority pursues an independent policy, which lacks of any commitment towards the dollarized economies (Cohen, 2004). Eventually, the inability of policymakers to accommodate macroeconomic shocks results in additional instability which in the absence of a lender of last resort can cause the collapse of the regime and of the economy. In this paper we attempt to shed some light on this debate by comparing the impact of real shocks on small open economies operating under the two opposite corner solutions: flexible exchange rates and official dollarization. We introduce into the analysis two important features from the definition of a good candidate for dollarization cited above: (i) the size asymmetries between the follower and the leader country, and (ii) the extent of economic integration (i.e. openness) of the follower with respect to the leader. In doing so, we argue that—in an open economy environment—size matters for macroeconomic stabilization because it changes the relative incentives of a country to use its monetary policy to optimally affect the exchange rate. In this analysis, we attempt to differentiate between economies that suffer credibility problems and those that are capable of eliminating or at least reducing those problems to reasonable boundaries. We start by analyzing the implications of adopting the two corner regimes on credibility. We show that although a pegged regime like dollarization is an effective device to achieve price stability for a small open economy, when discipline prevails to a certain extent, price stability might be achieved effectively without having to give up monetary independence. Following the credibility assessment, we focus our attention on examining the effects of adopting a dollarization regime on macroeconomic stabilization. We first assess the effect of stabilization policies neglecting the time inconsistency problems that might arise within each country with respect to the interaction between the monetary authorities and the private sector. In this case, we analytically show that not just asymmetric but also symmetric real shocks result in dissimilar effects, which impinge more heavily on a small open economy that opts for dollarization. We find that by exploiting its enhanced ability to adjust the real exchange rate, a small open economy may be better off under a flexible exchange rate regime than under dollarization after a symmetric or asymmetric shock. Following those analytical results, we employ a numerical solution to assess the impact of real shock in the presence of time inconsistency problems. In this case, we observe that only when the policymaker of the small economy shows poor discipline in controlling inflation (i.e. by aiming at highly expansionary policies which seriously compromise price stability), does the flexible regime becomes more costly than dollarization in terms of stabilization after a symmetric shock. Meanwhile, in the presence of asymmetric shocks, the stabilization cost of giving up monetary independence under dollarization unambiguously exceeds that of low discipline in controlling inflation under a flexible exchange rate regime. After comparing dollarization versus a flexible regime, we assess dollarization vis-à-vis a different benchmark. Recognizing that many economies have only a limited ability to use their own monetary policy effectively, we analyze the case of a small open economy that conducts monetary policy under what Calvo and Reinhart (2002) call “fear of floating” practices. In this situation, we find that, unless the size of the small economy is trivial, maintaining monetary sovereignty allows a better stabilization of the small economy following a symmetric shock. The rest of this paper is organized as follows. Section 2resents the asymmetric two-country model employed, derives some general reduced forms and describes the timing of events. Section 3nalyzes the inflationary bias in the absence of shocks under a floating regime and dollarization. Section 4ocuses on the analysis of stabilization polices under both regimes with and without time inconsistency problems. Section 5ompares the stabilization effects of dollarization against those under “fear of floating” practices. Finally, Section 6resents the conclusions of this paper.

This paper employs an asymmetric two-country model of policy coordination to assess the impact of symmetric supply and asymmetric demand shocks affecting a small open economy under a regime of dollarization. It is shown that although dollarization can be an effective regime to achieve price stability, giving up monetary independence might be costly in terms of stabilization. The results presented here contrasts with previous findings in the policy coordination literature for symmetric size economies which suggested that a fixed exchange rate regime provides a Pareto efficient outcome following a symmetric shock. We have also compared dollarization with a flexible regime under ‘fear of floating’ practices. Analyzing the effects of symmetric supply shocks we observe that even when a small open economy experiences fear of floating, the costs of stabilization are lower than those under dollarization. In our view, our results are consistent with the demise of the dollarization debate at a time when, due to the improvement of macroeconomic institutions and the benevolent world macroeconomic environment, inflation settled down in most of the EMEs that contemplated the possibility of dollarization in the late 1990s.