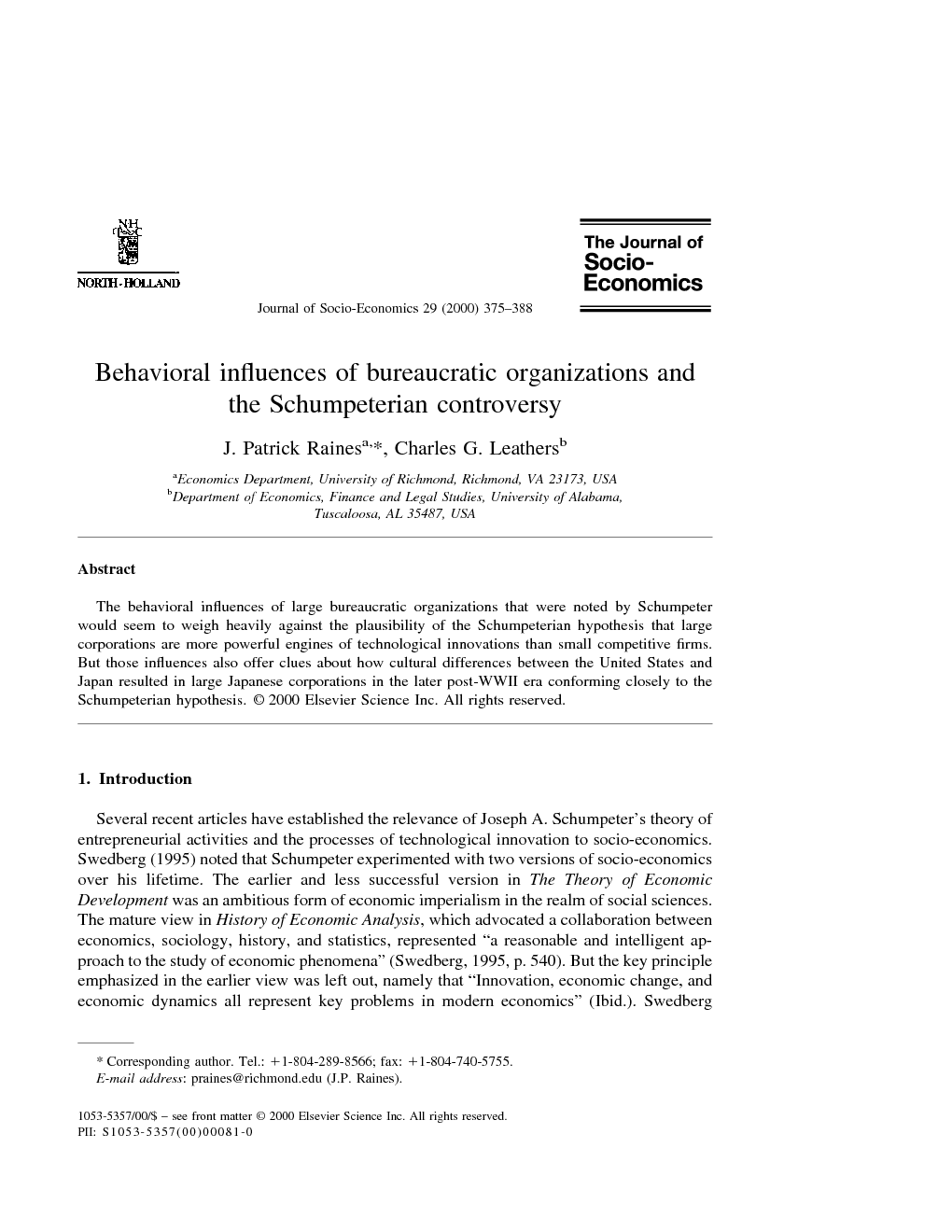 The behavioral influences of large bureaucratic organizations that were noted by Schumpeter would seem to weigh heavily against the plausibility of the Schumpeterian hypothesis that large corporations are more powerful engines of technological innovations than small competitive firms. But those influences also offer clues about how cultural differences between the United States and Japan resulted in large Japanese corporations in the later post-WWII era conforming closely to the Schumpeterian hypothesis.

Several recent articles have established the relevance of Joseph A. Schumpeter’s theory of entrepreneurial activities and the processes of technological innovation to socio-economics. Swedberg (1995) noted that Schumpeter experimented with two versions of socio-economics over his lifetime. The earlier and less successful version in The Theory of Economic Development was an ambitious form of economic imperialism in the realm of social sciences. The mature view in History of Economic Analysis, which advocated a collaboration between economics, sociology, history, and statistics, represented “a reasonable and intelligent approach to the study of economic phenomena” (Swedberg, 1995, p. 540). But the key principle emphasized in the earlier view was left out, namely that “Innovation, economic change, and economic dynamics all represent key problems in modern economics” (Ibid.). Swedberg stressed the importance of that principle, stating that: “Socioeconomic is particularly well equipped to study problems of this type, and they therefore should constitute its main focus” (ibid.). Daneke (1998) presented important new insights into the potential contribution of the Schumpeterian principle. To the extent that a national innovation system exists, it is in a stage of dramatic transformation. Alternate analytical perspectives are needed to understand this evolving system, and these start with Schumpeter’s recognition of technological innovation as the core of economic growth. Daneke explained why and how the emerging science of nonlinear or advanced systems (modern chaos and complexity theories) can provide analytical insights that expand our understanding of Schumpeter’s theory of entrepreneurship and technological innovation as a discontinuous process. In this paper we deal with a closely related topic. In The Theory of Economic Development, the processes of innovation were discontinuous as innovations generated by individual entrepreneurs in a system of competitive capitalism tended to appear in clusters. But in Capitalism, Socialism, and Democracy, large corporations were depicted as having succeeded in internalizing and making routine the innovation process. The controversial conjecture that large-scale corporations had become more powerful engines of technological innovations than competitive firms is known in the economic literature as the Schumpeterian hypothesis. Our purpose is to examine Schumpeter’s commentaries on the behavioral influences of large bureaucratic organizations in relation to the controversy over that hypothesis. In section 2, we review the nature of the controversy, noting that empirical research has failed to confirm the Schumpeterian hypothesis on a general basis but has revealed that innovational processes of large Japanese corporations in the later post-WWII era seemed to comply with it. In section 3, we examine Schumpeter’s commentaries on the behavioral influences of bureaucratic organizations in Capitalism, Socialism, and Democracy and in his earlier essay on social classes. In section 4, we consider the implications of those behavioral influences for the Schumpeterian hypothesis. On net, they would appear to weigh against large corporations being more powerful generators of technological innovations than individual entrepreneurs as proprietors of competitive firms. But they also offer clues about how differences in corporate cultures between the United States and Japan may have been responsible for large Japanese corporations conforming more closely to the Schumpeterian hypothesis.

Schumpeter’s emphasis on the evolutionary nature of capitalism has special relevance in this case. Prior to the 1990s, cultural factors and the evolutionary phase of capitalism seem to have coincided to make large Japanese corporations conform closely to the Schumpeterian hypothesis. But a new era appears to be emerging for the Japanese economy. The current recession in Japan suggests that the Japanese innovation processes may no longer be so incremental and superior to those of the western economies as was shown in the empirical literature. A Schumpeterian-type development—the eroding effects of capitalism on cultural structures–may explain why the situation has changed. In the case of Japan, both corporate and governmental responses to the recession suggest that the cultural differences that played important roles during the middle post-WWII years may have been eroded by the exposure of Japanese business to western market methods. As readily visible examples, more Japanese employees of large corporations are now losing their lifetime employment status, and the government is showing new willingness to allow weaker firms to fail. Since the Schumpeterian behavioral influences of large bureaucratic organizations appear on net to challenge the Schumpeterian hypothesis, the discontinuous nature of innovations may be expected to be the pattern of the future in Japan as well as in the West. Consequently, Daneke’s work in applying modern chaos and complexity theories in studies of the innovation processes assumes even greater importance.Schumpeter 1934, Schumpeter 1928 and Schumpeter 1951