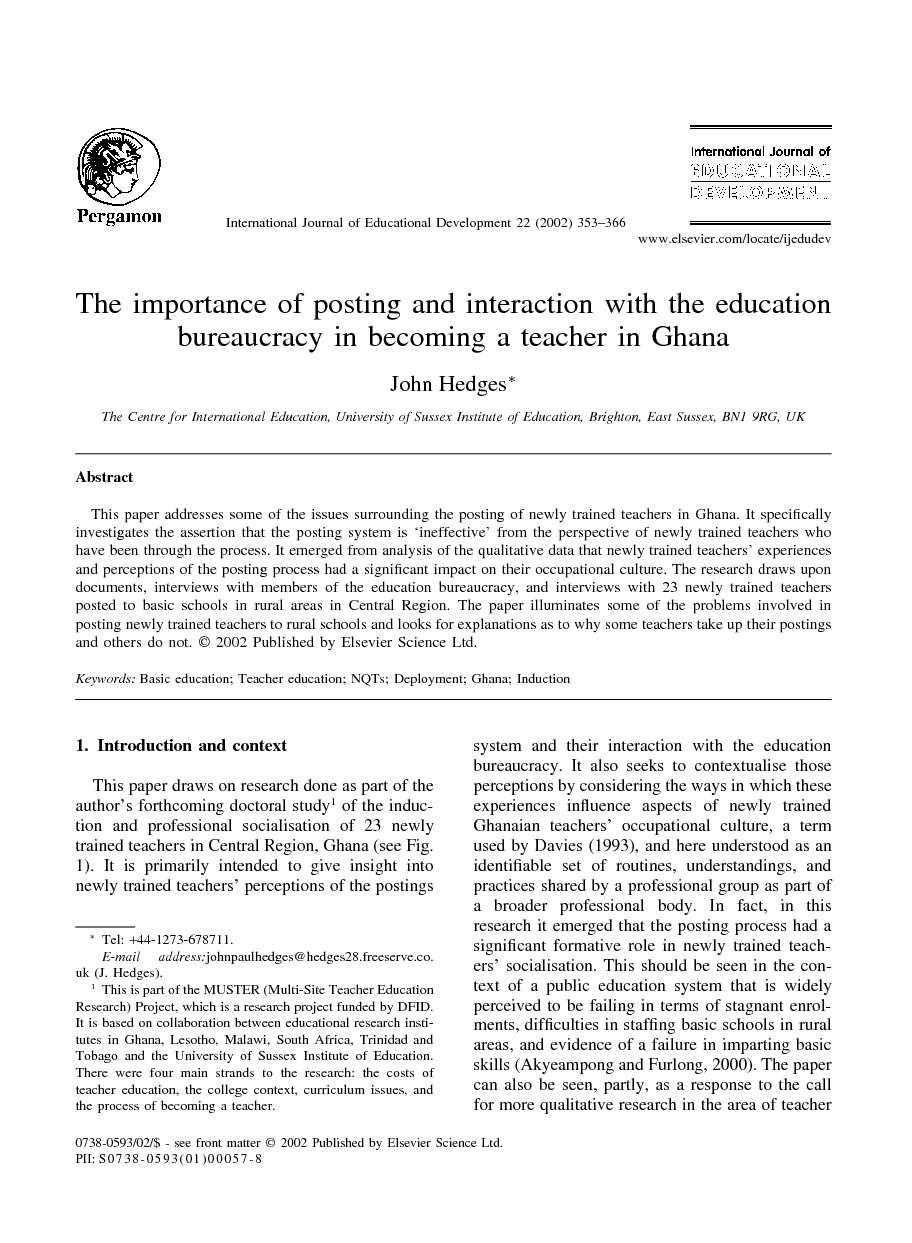 This paper draws on research done as part of the author’s forthcoming doctoral study1 of the induction and professional socialisation of 23 newly trained teachers in Central Region, Ghana (see Fig. 1). It is primarily intended to give insight into newly trained teachers’ perceptions of the postings system and their interaction with the education bureaucracy. It also seeks to contextualise those perceptions by considering the ways in which these experiences influence aspects of newly trained Ghanaian teachers’ occupational culture, a term used by Davies (1993), and here understood as an identifiable set of routines, understandings, and practices shared by a professional group as part of a broader professional body. In fact, in this research it emerged that the posting process had a significant formative role in newly trained teachers’ socialisation. This should be seen in the context of a public education system that is widely perceived to be failing in terms of stagnant enrolments, difficulties in staffing basic schools in rural areas, and evidence of a failure in imparting basic skills (Akyeampong and Furlong, 2000). The paper can also be seen, partly, as a response to the call for more qualitative research in the area of teacher development in Ghana to inform policy-making and education reform (Harber and Dadey, 1993 and Akyeampong, 1997).The research was undertaken in Central Region in two phases of fieldwork carried out between January 1999 and April 2000, while the author was based at the Institute of Education, Cape Coast University, Cape Coast.

Two key concerns in Ghanaian education focus on the quality of primary education, and the level of staffing in the rural areas. Evidence in this paper reveals that the bureaucracy can exacerbate the problem in certain ways, such as a postings procedure that reinforces the already existing ambivalence about teaching as a career. For many newly trained teachers, their experience of GES as they move from the colleges to the schools leaves them with a permanent image of a system that is neither fair or rational, rewarding ‘deviance’ and undermining professionalism. The majority represent what they do in terms of the contradictory aspects of the occupational culture outlined in this paper. This occupational culture may be individualistic, or community-oriented, or, sometimes, apparently rhetorical and detached from what actually goes on in the classroom; some of it may be a response to negative experiences at the hands of the bureaucracy. Since the professional association, GNAT, represents both bureaucrats and teachers, it is perhaps compromised in its defence of teachers’ interests when they conflict with the operations of the bureaucracy, as they do, for instance, in the case of the late payment of salaries. Furthermore, the contextual factor of the low status of teachers within society may also undermine professional aspirations articulated in training and by the teachers themselves, particularly when communities are ambivalent about the purposes of schooling. This arguably encourages the tendency for teachers to see their careers in more individualistic terms and reject notions of service and community development. On the other hand there are many positive signs that need to be noted: there are many teachers who accept difficult postings and show an individual commitment to the job that rises above poor pay and conditions. Despite some conflicts over expectations and tradition, there is still some goodwill towards teachers and the aims of education in many communities in Ghana, and there are signs that SPAM is encouraging dialogue between teachers, schools, and the community, with positive outcomes for all. In the process, it seems, teachers’ roles may be reconstructed as servants of the community rather than ‘leaders’, but newly posted teachers may only accept this redefinition of their roles if the community shows that it values them, through provision of foodstuffs and accommodation, as already happens in some cases. Study leave is a key motivator for newly posted teachers, and perhaps should be linked more closely to appraisal and the acceptance of difficult postings to create a system that rewards professional commitment and service. The recent increased emphasis on primary methods in the three-year pre-service training is also questionable, given the apparent career aspirations of teachers involved in this study. A recent quantitative study by Mereku (2000) supports the qualitative findings of this study, noting that current attrition rates from basic education are 3% per annum rather than the projected 1%. It therefore proposed a reform of teacher education for trained and untrained teachers and a study leave system focused on keeping people teaching at the basic level. There is a profound fear among newly trained teachers with a modern individualistic outlook that if you spend too much time in an isolated village without access to further education, you become ‘a village man’, a term which strongly conveys the perceived ignorance of rural dwellers in the eyes of some urban educated Ghanaians. A solution needs to be sought that develops links between would-be teachers and communities, such as the proposed district sponsorship scheme. This could be used to encourage young women to go to rural communities where they would perhaps feel safer, near relatives, for example, and it would also give NQTs more agency in relation to their posting. There are signs that small improvements in teachers’ working and living conditions in rural areas, particularly in relation to accommodation, might encourage more enthusiasm for postings; and the policy of posting two or more teachers together to rural schools seems to be fairly effective, particularly in the case of women. The bond, tying teachers to their first posting for a specified number of years, was supposed to be reintroduced in 2000, and should carry a considerable sanction (five times the amount spent on their training); whether it can be enforced within the current occupational culture is debatable. There was an interesting straw in the wind regarding the occupational culture of GES towards the end of the 1998–1999 academic year. The national headquarters of GES was full of recently displayed posters informing all visitors that if they were dissatisfied with the service they received from the people they had come to see, they should make a complaint. The emphasis on service is important as it seeks to change the existing occupational culture described by Nti (1996). Whether GES at the national level will be willing to decentralise power to the districts, in line with publicly stated policy, remains to be seen. Furthermore, it should be noted that there remain doubts about the capacity of districts to cope with deployment and salary payments in the short term. The lack of agency, disappointment and injustice that many feel as part of the postings process could be replaced by a more professional commitment to teaching if incentives were linked to the acceptance of difficult postings. Ultimately, the holy grail of education in Ghana — posting trained and motivated teachers to schools where they are needed and where they are willing to stay for enough time to make a difference — can only be achieved by acknowledging the interaction between the bureaucracy and the teachers’ occupational culture, reinforcing the positive while regulating the negative. In the process a balance between the individual aspirations of teachers and the needs of the communities they serve in a rapidly modernising society needs to be found: a balance that transforms a culture of manipulation and resentment into one of professionalism, commitment and service, building on foundations that are already there