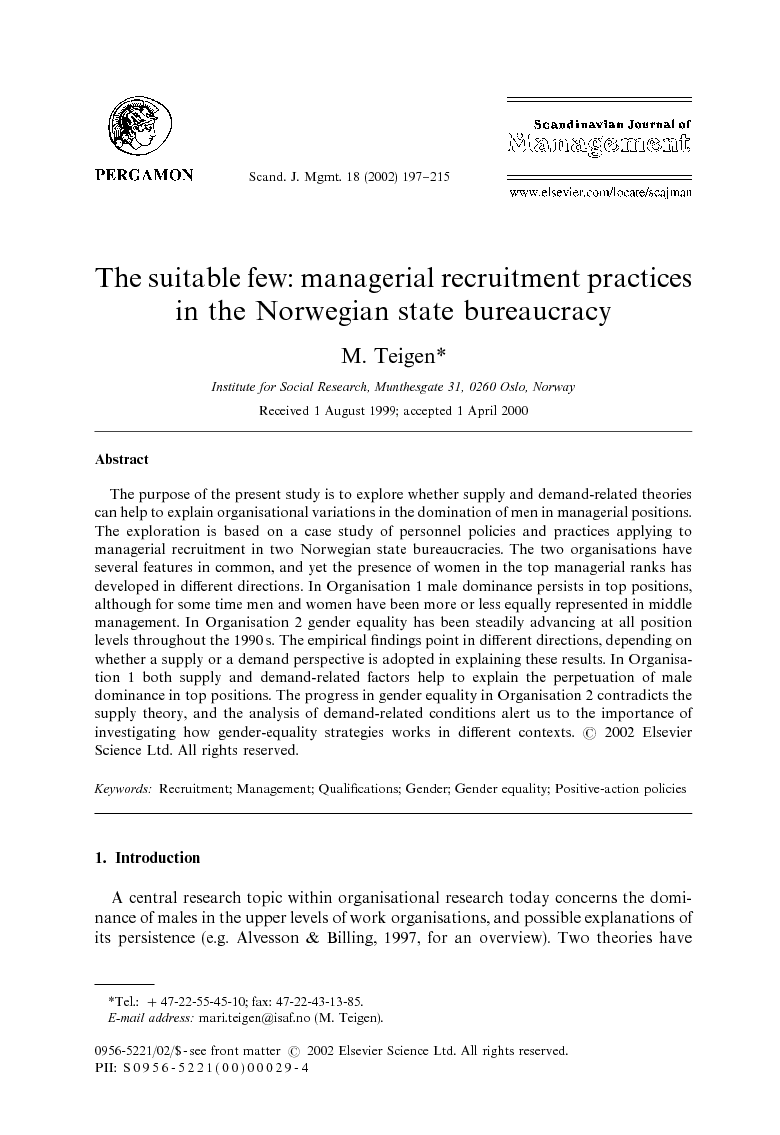 The purpose of the present study is to explore whether supply and demand-related theories can help to explain organisational variations in the domination of men in managerial positions. The exploration is based on a case study of personnel policies and practices applying to managerial recruitment in two Norwegian state bureaucracies. The two organisations have several features in common, and yet the presence of women in the top managerial ranks has developed in different directions. In Organisation 1 male dominance persists in top positions, although for some time men and women have been more or less equally represented in middle management. In Organisation 2 gender equality has been steadily advancing at all position levels throughout the 1990 s. The empirical findings point in different directions, depending on whether a supply or a demand perspective is adopted in explaining these results. In Organisation 1 both supply and demand-related factors help to explain the perpetuation of male dominance in top positions. The progress in gender equality in Organisation 2 contradicts the supply theory, and the analysis of demand-related conditions alert us to the importance of investigating how gender-equality strategies works in different contexts.

A central research topic within organisational research today concerns the dominance of males in the upper levels of work organisations, and possible explanations of its persistence (e.g. Alvesson & Billing, 1997, for an overview). Two theories have dominated this field of research: supply theory and demand theory (Reskin, 1993). The supply theory emphasises the way the gender structure of organisations is shaped by gender differences in occupational choices and ambitions. The demand theory looks at how organisations are gendered in ways that advantage men and disfavour women. Both these explanations have been the subject of several studies (see e.g. Bielby & Baron, 1986; Reskin, 1993; Powell & Butterfield, 1994; Hultin, 1998; Petersen, Saporta, & Seidel, 2000). However, the findings differ as to whether supply and demand explanations are seen as complementary, or whether one explanation should be preferred over the other. In the light of the strong institutionalisation of gender-equality policy in the Scandinavian context, the continuation of male dominance in the management positions of working life is a particularly intriguing phenomenon. Gender relations in Scandinavia can be described as paradoxical (Kvande, 1999) — paradoxical, because on the one hand women participate to a high degree in the work force (Ellingsæter, 2000) as well as participating in politics on equal terms with men (Raaum, 1999), while on the other the representation of women in the power élite of most work organisations remains at the same low level in the Scandinavian countries as in most other western-world countries (Davidson & Cooper, 1993; Raaum, 1996). The achievement of gender equality in top positions has long been one of the central goals of Norwegian public sector organisations. Yet the civil servants, the implementers of government policy, still constitute a masculine assembly. In 1999, 17% of the top executives in the Norwegian state authorities were women (in 1997, 14%). There are significant intra-organisational variations, however. The proportion of women in top managerial positions varies from 0 to 32% (Storvik, 1999). The present study investigates the pertinence of supply and demand theories in explaining organisational variation in progress on the gender-equality front. The impact of gender-equality strategies is also examined, and the way such policies affect supply and demand conditions. The investigation is based on a case study of manager recruitment practices in two Norwegian state bureaucracies.1 In the present case study the two organisations are similar in the sense that they exist within the same field of working life: they are bound by the same regulations, guidelines, personnel policy, positive-action plans, etc.; they are roughly equal in size; their internal organisational structure is similar; and their main concerns belong within clearly politicised areas. Yet the gender-equality profiles of the two organisations have developed in different directions during the 1990 s. In Organisation 1, despite a balanced representation of men and women in middle manager positions, men continue to dominate top management, while in Organisation 2 gender balance has made progress over a relatively short period of time. The question of how these changes have arisen will be addressed by examining some actual cases of recruitment to managerial positions. The way the hiring agents2 judge candidates in relation to perceptions of competence is a key theme. The distinction between formal qualifications on the one hand and other vaguer and less measurable qualifications such as personal suitability on the other, is particularly important here. Gender-equality agreements and positive-action plans, including regulations regarding preferential treatment, are a prominent feature in the Norwegian public sector (Teigen & Jensen, 1995). This emphasis on formal regulations expresses the belief that gender relations can be changed as a result of political–legal reforms. The effectiveness of such policies has been criticised, however (Collinson, Knights, & Collinson, 1990; Cockburn, 1991; Rasmussen (1990) and Kvande & Rasmussen (1995); Rasmussen, 1999). The present analysis provides a discussion of the opportunities and impediments connected with the implementation of gender-equality strategies for enhancing the career prospects of women candidates. Central public administration is the context chosen for this study. First, because it is an important arena of power and influence. Second, it is of particular interest because of the strategic importance of the state sector for the development of a woman-friendly state policy (Hernes, 1987). Third, the central public administration was among the first to introduce internal gender-equality agreements, including procedures for preferential treatment; hence the successes of gender-equality strategies are particularly relevant in this context. Fourth, the fact that the pool of applicants to upper-level positions in the state bureaucracy usually contains both men and women (see Storvik, 1999), makes a good starting point from which to address the status of gender-equality arguments in relation to other selection criteria.