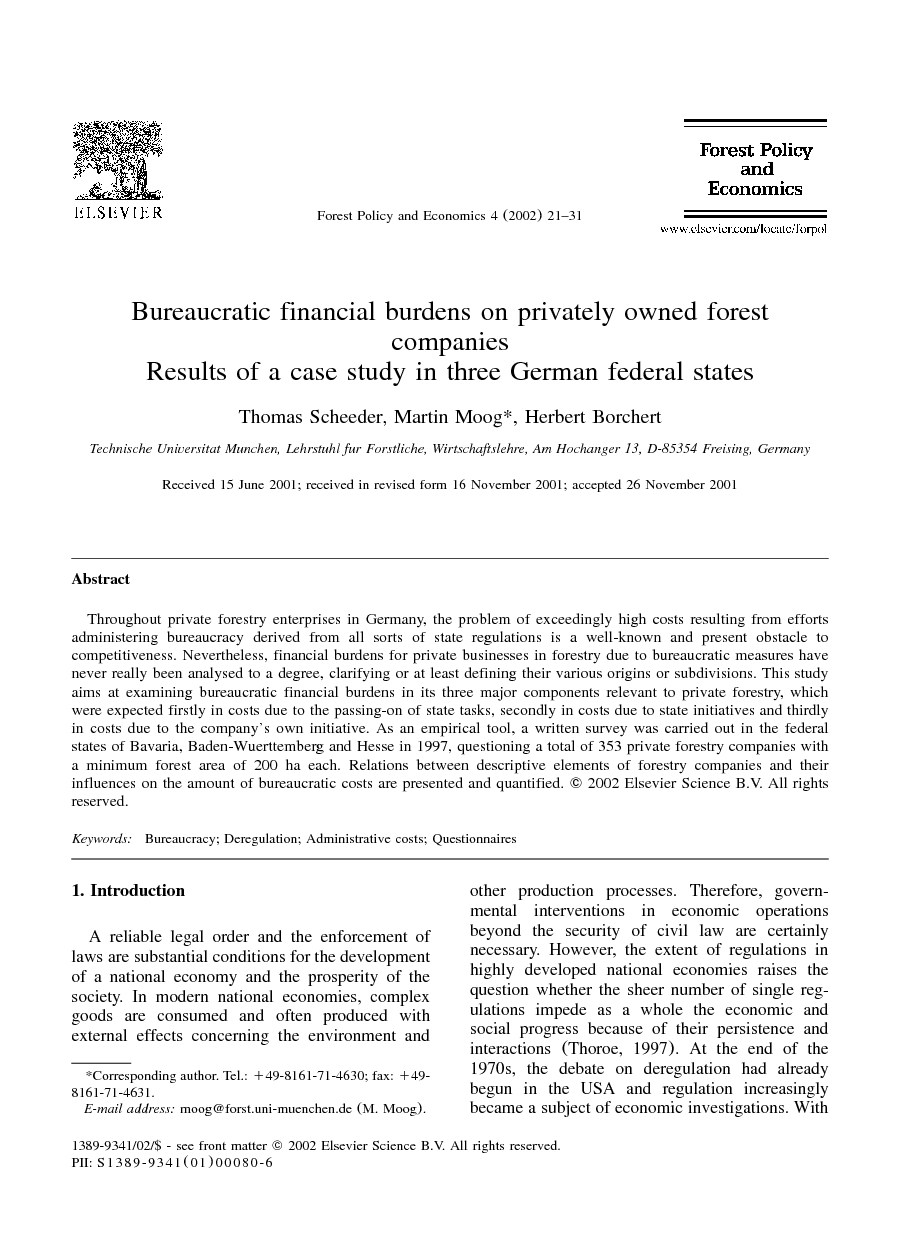 Throughout private forestry enterprises in Germany, the problem of exceedingly high costs resulting from efforts administering bureaucracy derived from all sorts of state regulations is a well-known and present obstacle to competitiveness. Nevertheless, financial burdens for private businesses in forestry due to bureaucratic measures have never really been analysed to a degree, clarifying or at least defining their various origins or subdivisions. This study aims at examining bureaucratic financial burdens in its three major components relevant to private forestry, which were expected firstly in costs due to the passing-on of state tasks, secondly in costs due to state initiatives and thirdly in costs due to the company's own initiative. As an empirical tool, a written survey was carried out in the federal states of Bavaria, Baden-Wuerttemberg and Hesse in 1997, questioning a total of 353 private forestry companies with a minimum forest area of 200 ha each. Relations between descriptive elements of forestry companies and their influences on the amount of bureaucratic costs are presented and quantified.

A reliable legal order and the enforcement of laws are substantial conditions for the development of a national economy and the prosperity of the society. In modern national economies, complex goods are consumed and often produced with external effects concerning the environment and other production processes. Therefore, governmental interventions in economic operations beyond the security of civil law are certainly necessary. However, the extent of regulations in highly developed national economies raises the question whether the sheer number of single regulations impede as a whole the economic and social progress because of their persistence and interactions (Thoroe, 1997). At the end of the 1970s, the debate on deregulation had already begun in the USA and regulation increasingly became a subject of economic investigations. With increasing competition between nations, the national policy regarding regulation has evolved to a major factor influencing the international competitiveness of the national economies and has an important bearing on the movement of mobile production factors (Thoroe, 1998). Public regulations are often justified by failure of the market system. It is widely agreed that without governmental regulation, allocation of resources in a market economy would be inefficient because of external costs (Thoroe, 1997). An alternative scientific approach to explain the observed regulations offers the ‘interest group theory’ or ‘capture theory’, which was mainly established by Stigler, 1971 and Posner, 1974 and Peltzman (1976) and is founded in the ‘public choice’ approach. In this theory a ‘market for regulations’ exists. Supply of regulation by politicians and officials as well as demand for regulation by organised interest groups are determined by the pursuit of personal benefit. Important assumptions are that the politicians aspire to maximise votes, officials to maximise budget and prestige and that lobbyists are seeking rents. The official reasons for the measures are spurious and camouflage the authentic intentions (Watts and Zimmerman, 1979). In this process, tightly organised groups gain unmerited revenues at the expense of poorly organised groups. According to another theory, that is surely worth the discussion, public regulations are enacted to cope with crises and afterwards are maintained as proven measures so that the density of regulations ever increases (Joskow, 1974 and Owen and Braeutigam, 1978). However, the establishment of regulations can be explained, regulation grew to being a supreme location factor in the international competition. Even though, on the one hand, regulations enhance the security of companies and thus limit business risks, on the other hand, diverse costs are caused. Not only single regulations, (i.e. environmental acts) but also the density of regulations is an important location factor for the forest sector as well as for less environmentally friendly industries. In comparison to big industry businesses, the owners of small-sized forest areas scarcely have the chance to relocate their business. In most cases they have only the choice to disinvest by selling their property. Following the interest group theory, the owners or managers of forest enterprises are integrated in the process of regulation. Their benefits from regulation occur as subsidies or tax relief and can at least partly be quantified comparatively easy. It is much more difficult to estimate the disadvantages in the shape of a rise in many different costs. The quantification of these costs subdivided into different categories of regulation can give the suppliers of regulations (politicians, public administration, jurisdiction) and the interested parties demanding regulation (enterprises, associations) some hints on domains worthwhile for deregulation with regard to the capacity of international competition. The survey presented in this paper as a case study for Germany is designed to make a contribution to quantify the costs of regulation forest enterprises have to bear. Next, the kinds of regulation costs that have been studied are described, namely as bureaucratic financial burdens. These costs are subdivided into different categories. Following that, the method of the survey is briefly explained and the observed amount and structure of financial burdens described. Some results can only be understood in the specific framework of the German legal order. Hence, these results are outlined in more detail. After a description of differences in various federal states the most important factors influencing the costs of regulation are analysed. The results are compared to those of earlier surveys in Germany and finally, discussed.

The case study presented here is the first one in Germany that tries to find out through empirical research the amount of bureaucratic financial burdens imposed on privately owned forest companies. As it was already shown in other studies, the survey confirmed the existing relationship between the size of the companies and the amount of financial bureaucratic burdens. Otherwise, the reasons for factors determining bureaucratic financial burdens could not be determined to our satisfaction. Therefore, with regard to these matters, more research will have to be done. As far as absolute amounts of bureaucratic financial burdens are concerned, the results of the case study can well be regarded as meaningful. Concerning costs caused by state tasks being passed on to forest companies, the results correspond to the findings of other empirical studies. However, the possibility of strategic behaviour of people answering the questions cannot be excluded. Also the non-response bias must be regarded. Possibly, those who did not feel that they bear a high financial bureaucratic burden did not answer the questionnaire, while those who were angry with bureaucracy tended to answer. Therefore, the results may well be biased and may overestimate the financial bureaucratic burden. The amount of bureaucratic financial burdens in relation to the whole costs of the management of privately owned forest companies might seem moderate. Thereby, it must be taken into account that not the whole costs due to public regulation are included. Opportunity costs in connection with the enforced abandonment of special methods of, e.g. operations, are not recorded. Until comparable data from other countries is available, it is not possible to discuss the importance of regulation for companies belonging to the German forest sector and their international competitiveness on a sound empirical basis. On the international level, other factors affecting the amount of costs due to regulation could and should be examined, e.g. the population density and forestry structure of different countries. Recording the costs due to regulation could also serve for monitoring the development. The measures within the European Union towards adjustment of laws may lead to further bureaucracy despite the intention to put on trade facilitation. In fact, the number of lobbies seeking attention increases thereby more and more. Finally, a further trend in this field should be pointed out. Along with governmental regulation, more and more non-governmental regulation emerges. Companies comply with the non-governmental regulation more or less voluntarily, (e.g. certification) and the question arises as to how non-governmental regulation affects the efficiency of the allocation of resources in comparison to governmental regulation.