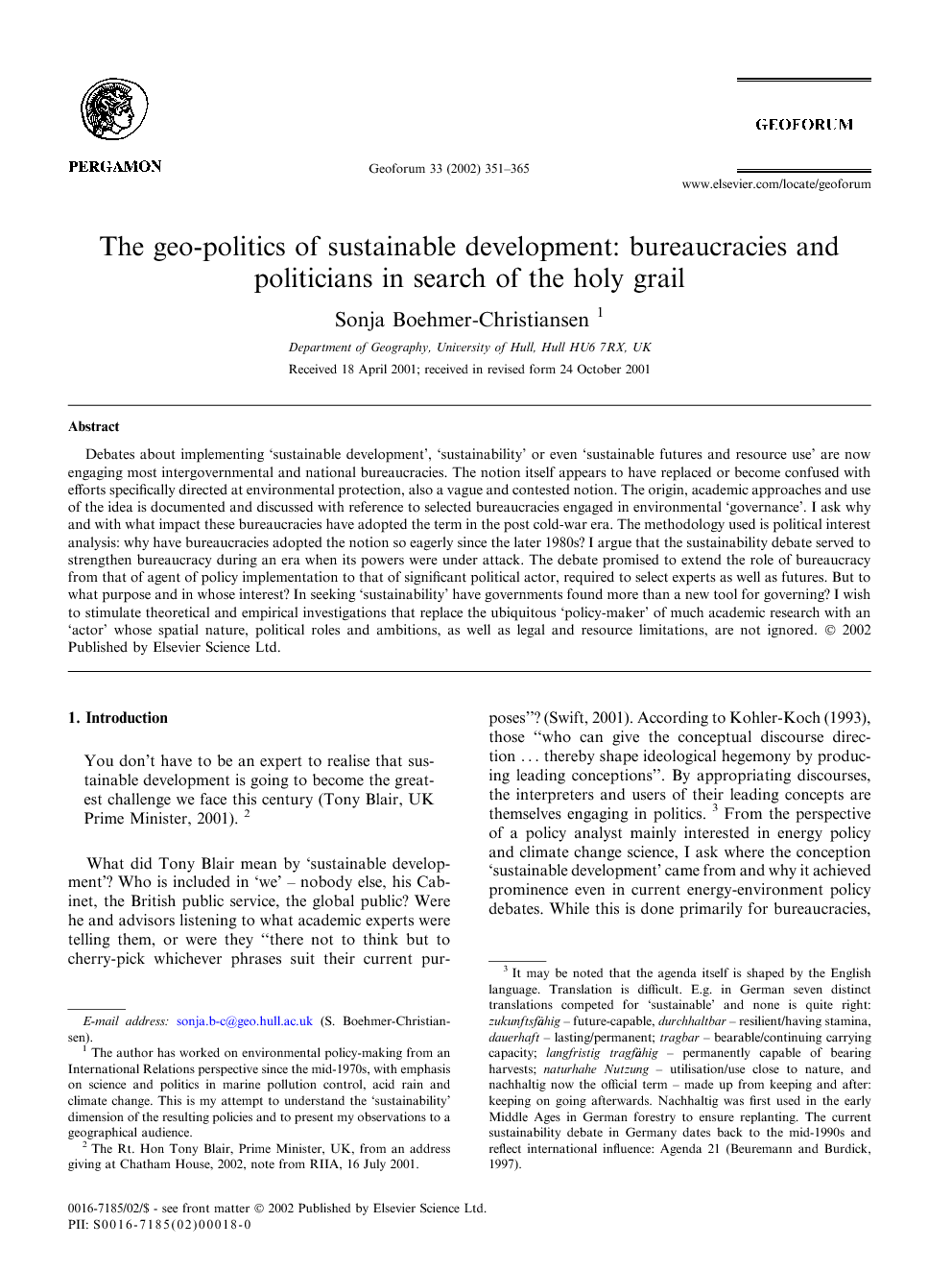 Debates about implementing `sustainable development', `sustainability' or even `sustainable futures and resource use' are now engaging most intergovernmental and national bureaucracies. The notion itself appears to have replaced or become confused with efforts specifically directed at environmental protection, also a vague and contested notion. The origin, academic approaches and use of the idea is documented and discussed with reference to selected bureaucracies engaged in environmental `governance'. I ask why and with what impact these bureaucracies have adopted the term in the post cold-war era. The methodology used is political interest analysis: why have bureaucracies adopted the notion so eagerly since the later 1980s? I argue that the sustainability debate served to strengthen bureaucracy during an era when its powers were under attack. The debate promised to extend the role of bureaucracy from that of agent of policy implementation to that of significant political actor, required to select experts as well as futures. But to what purpose and in whose interest? In seeking `sustainability' have governments found more than a new tool for governing? I wish to stimulate theoretical and empirical investigations that replace the ubiquitous `policy-maker' of much academic research with an `actor' whose spatial nature, political roles and ambitions, as well as legal and resource limitations, are not ignored.

What did Tony Blair mean by `sustainable development'? Who is included in `we' – nobody else, his Cabinet, the British public service, the global public? Were he and advisors listening to what academic experts were telling them, or were they “there not to think but to cherry-pick whichever phrases suit their current purposes”? (Swift, 2001). According to Kohler-Koch (1993), those “who can give the conceptual discourse direction … thereby shape ideological hegemony by producing leading conceptions”. By appropriating discourses, the interpreters and users of their leading concepts are themselves engaging in politics.3 From the perspective of a policy analyst mainly interested in energy policy and climate change science, I ask where the conception `sustainable development' came from and why it achieved prominence even in current energy-environment policy debates. While this is done primarily for bureaucracies, business could also have been chosen.4 Somebody needs to translate `sustainability' into actions that are justified by legitimate instruments. After very briefly outlining the origins of and research interests in the concept, the paper identifies some of the major human `agents' (UK government, EU, World Bank and UN Agencies) who have exercised their power of appropriating this intellectual concept for policy relevance. I make no claim to comprehensiveness, my own field of research since the 1970s having been environmental politics.5 It is argued that prevailing notions of sustainability are primarily arenas for policy contests and hence politics. The very vagueness of the term has empowered bureaucracies to enlarge or reaffirm old roles, as in planning and economic regulation, and encouraged them to invite broader participation in the process of governing. However, as long as the political purpose of sustainability remains as poorly defined by academics as: `the primary focus of national and international environmental policy'; seeking `to achieve environmental protection without confronting tough choices' or even as requiring fundamental change in `political economic systems' (Fischer and Black, 1995; citations from back cover-page), actual policy-makers may do no than use the notion to expand `turfs' and influence. Engineering of systemic change can surely not be part of their mission, while struggles over access to resources, information and finance are. Is the sustainability `discourse' more than a new veil over old battles? Three basic questions are to be explored: • Where did the term come from and why was it so widely adopted after the Brundtland Report? • Who is now negotiating `sustainability' at national and international scales? • Is `sustainability' more than a slogan to legitimate planning, economic intervention and technology forcing by States? If sustainability is the goal of the post-communist One World, including the advocated participatory democracy, what meaning is it being given de facto by practitioners?6 2. Origin: sustainability as research agenda and environmental mission While the planners of the International Human Dimension of Global Environmental Change Programme (IHDP) managed without the term in 1988, by 2001 they were proposing `sustainability science' as a new global research agenda for collaboration between the natural and social sciences.7 Debates about the meaning of sustainability and its relationship to other ideas and agendas, such as `globalisation', `ecological modernisation' and `industrial transformation' continue (Gibbs, 2000; Buttel, 2000).8 Given its ubiquity, the notion has attracted the attention of many. The sources I have consulted range from political scientists (Meadowcroft, 1997), `post-modern' international relations theorists (Doran, 1997), and students of organisational studies (Bäckstrand et al., 1996) to the multi-disciplinary volumes edited by Fischer and Black (1995) and Becker and Jahn (1999). The last mentioned volume promotes the concept not “as some talisman opening the road to a unifying paradigm, but instead as a generator of problems to which responses must be found” (on backcover). While responses here refers to research rather than policy, the ultimate aim remains a link with practice, namely, `the development of forward-looking and actor oriented sustainability strategies'.9 The authors admit that the meaning of the concept remains contested but accept ecological crisis phenomena as reality (p. 4). Who identifies this reality? Who is to apply these strategies, who to execute? Are officialdom and the research enterprise feeding of each other in the hope of mutual support and, perhaps, policy innovation?

The concept of sustainability has acquired many meanings after it emerged from English-speaking academic circles during the 1970s. The notion provided many academic disciplines with expanded research agendas and funding opportunities, often with `policy-makers' as intended users. As something that rational management and planning promised to deliver, it took root in the UN system, Bretton Woods bodies and European Commission, as well as many national civil services. As all of these bodies were dedicated to economic development and maintaining their particular competence and influence, the conceptions was adapted accordingly. The idea seemed to appear particularly attractive to a country like the UK that was eager to return to a more development path after a period of economic stagnation. Bureaucracies in danger of losing influence and powers during the 1990s could not but be attracted to an idea that promised new roles in an era of privatisation, deregulation, liberalisation and the emergence of new political actors that were becoming a threat to traditional bureaucratic roles. Dread of the future and planning against invisible, often unknowable, risks provided the administrative state with new functions (environmental protection traded-off with other objectives) and new sources of income (green taxation). An operationally difficult concept became popular in the machinery of government less because of its technical virtues but because of its political utility. By 2001 it had become a policy platitude in world politics as well as for many national bureaucracies.19 Lacking a clear ideology and tending to deny the possibility of unresolvable social conflict, notions of sustainability prospered because they invite State intervention in almost all spheres of life. As such, they act as `gateways' for the selection, by bureaucracies, of largely unelected `stakeholders' to participate in policy- making. This may enable the greening of global capitalism in return for substantial administrative and regulatory roles. By seeking the holy grail of `sustainability' governments have sought to justify intervention and technology forcing by taking `the environment into account'. Whether this transformation of an apparently radical agenda into a tool of bureaucratic politics will turn out to be `reactionary' or `progressive' is of course a matter of judgement reflecting the values of the judge. When judged from the perspective of human equality, the evidence suggests that seeking `sustainability' is as yet little more than a political tactic that de facto serves capital accumulation and enhancement of the quality of life of those that can pay `extra'. A new departure in governing is only likely if `sustainable development' were to be accompanied by clearly expressed and realisable political aims. Perhaps the place for advancing sustainability can only be the local level, as one referee of this paper suggested. A redistribution of political power to the local level would have to happen first. I have tried to show that the concept has been found most attractive, in practice, at levels where conflicts over development and legal competence, and the desire to `trade away' environmental protection, are most acute. This appears not to have been the intention of the theorists.