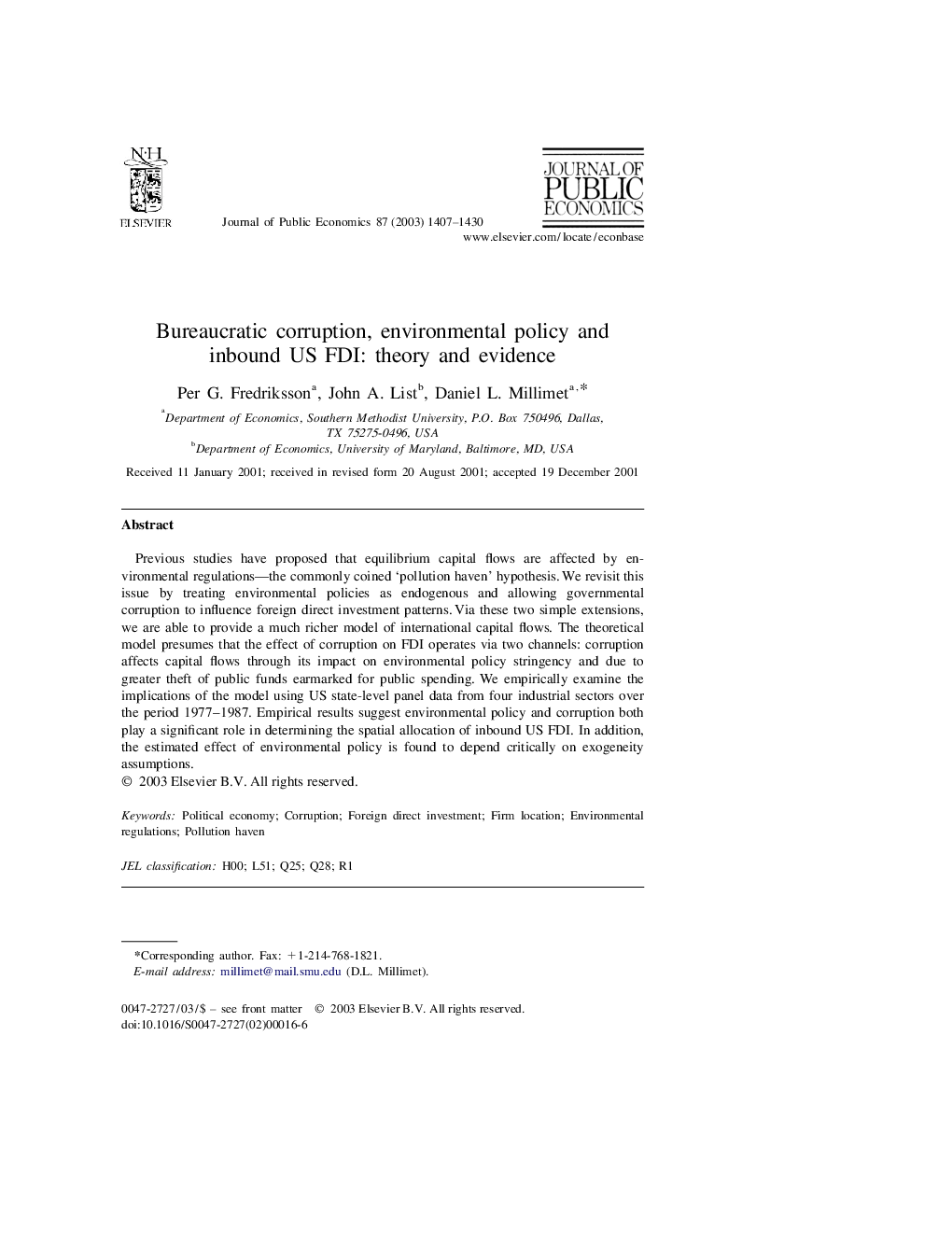 Over the past decade, economic reform in New Zealand has attracted considerable international attention. In particular, New Zealand is considered to be the epitome of the “New Public Management" (NPM) in the public sector. This paper examines the various ways in which the Audit Office has facilitated or challenged the public sector reforms in New Zealand. Tension between the Treasury and the Audit Office is examined as part of a wider conflict between a “privatization" agenda and a “democratization" agenda. Recently, the latter seems to be gaining ascendancy with a shift in focus from “public managerialism" to “public governance". This makes traditional hierarchical forms of accountability difficult to maintain and poses new challenges for accounting and audit.

Activities of multinational corporations have expanded considerably over the past 15 years. Data on worldwide nominal foreign direct investment (FDI) inflows show increases of nearly 18% per annum from 1985 to 1997. This growth rate is stark in light of the much smaller rates of growth observed in GDP and trade flows. Perhaps even more surprising, in light of the political rhetoric associated with capital flight, is that industrialized economies received a major share (71.5%) of these FDI inflows (Shatz and Venables, 2000). The asymmetric distribution of capital flows across countries has spurred a large literature examining the structural determinants of FDI flows (see, e.g. Froot, 1993). One insightful line of research includes studies that examine the effect of corruption on the cross-country pattern of FDI (Wheeler and Mody, 1992 and Hines, 1995; Wei, 2000). A related line of work explores the impact of environmental regulation on US FDI, both inbound and outbound (see, e.g. Eskeland and Harrison, 1997 and Keller and Levinson, 1999; List, 2001). While the first set of studies suggests that corruption has a negative effect on FDI into developing countries, the latter group provides only weak evidence that lax environmental policies attract capital (i.e. that ‘pollution havens’ exist). This second set of studies, however, suffers from two potential deficiencies: (i) environmental policy is assumed exogenous, and (ii) governmental corruption is not explicitly modeled.1 At first glance, one may conclude that corruption in the US is minimal, and therefore should play little role in the (inbound) FDI decision. However, anecdotal evidence suggests otherwise. For instance, an environmentally-related corruption ring, termed Operation Silver Shovel by the FBI, was uncovered in the mid-1990s. In the end, corruption convictions were handed out to 18 Chicago residents: six were current or former city aldermen. Herbert Collins, former Special-Agent-in-Charge of the Chicago Field Division quipped: ‘This investigation was initiated because of the concerns about public officials who were misusing their offices by permitting illegal landfills and other environmental misuses to occur.’2 The list of such distortions of environmental policy in the US is extensive, and highlights the need for a richer model of environmental policy determination. In this paper, we attempt to remedy both potential deficiencies by investigating the impact of endogenous US state environmental regulations on FDI inflows, controlling for state level bureaucratic corruption. We therefore contribute to the literature on the pollution haven hypothesis as well as the relationship between corruption and FDI. To guide our empirical work, we first develop a simple theoretical model that endogenizes both environmental policy and the capital stock. Our model makes use of results from the endogenous growth literature to provide insights into environmental policy regimes adopted by honest and corrupt bureaucrats.3 Worker and environmental lobby groups, in return for favorable environmental policies, offer the corrupt bureaucrats prospective bribes.4 Each corrupt bureaucrat is also assumed able to ‘steal’ a share of tax revenues that are earmarked for public expenditures.5 According to the theoretical model, the influence of corruption on FDI operates via two distinct channels: the supply-side impact on the level of public goods provided, and the effect on environmental stringency. Presuming that foreign capital is attracted to locations with greater public funds, more widespread corruption reduces capital inflows through the theft of such funds. The model is inconclusive, however, with respect to the impact of corruption on environmental policy, although it does suggest that the effect of corruption on environmental stringency is contingent on the local tax effort. Finally, conditional on environmental regulation and public expenditures, corruption is assumed to have no measurable effect on FDI inflows. We use state-level panel data from 1977 to 1987 to test the key aspects of the theoretical model. Our empirical examination, which makes use of two continuous measures of FDI—(i) gross value of plant, property, and equipment, and (ii) employment in foreign-owned affiliates for four groups: aggregate manufacturing, chemicals, metals, and food and kindred products—as well as discrete location choices across pollution and non-pollution intensive foreign-owned plants, validates several components of the theory. First, we find that corruption influences the supply of relevant public goods as well as the stringency of environmental regulations. Second, we find that public expenditures and the severity of environmental regulations influence FDI inflows in some sectors. Third, conditional on environmental policy and the supply of public goods, we find no remaining impact of corruption on capital inflows. Moreover, in accordance with our underlying premise, the empirical results are sensitive to the exogeneity assumption: whether we examine FDI flows or stocks, we find that the curious results in the received literature are partly explained by the statistical treatment of environmental regulations. Thus, our results not only lend support to our theory, but also are consonant with economic intuition. The organization of the paper is as follows. Section 2 sets up a simple model of bureaucratic corruption, environmental policy, and capital flows. Section 3 describes the empirical model and the data. Section 4 reports the results. Section 5 concludes.

While the days of William ‘Boss’ Tweed, the infamous corrupt official from New York City, may be long gone from political circles in the US, that does not imply corruption fails to influence local public policies. In this paper, we make a new attempt at identifying ‘pollution haven’ effects by allowing corruption to indirectly affect FDI flows. We conjecture that the influence of corruption on FDI evolves via two channels: the impact on the supply of public goods and the effect on environmental stringency. The model suggests that more widespread theft of public funds (due to a greater incidence of corruption) reduces capital inflows, while corruption also influences capital inflows through its ambiguous effect on environmental policy. We use state-level panel data from 1977 to 1987 to test the main aspects of the theory. In many respects, the data provide a nice external validation of the model—whether we examine stocks or flows, our results suggest that environmental policy stringency and corruption play a significant role in shaping the spatial allocation of foreign investment into the US. We also find that certain modeling assumptions are critically important—measured effects of environmental policy stringency on FDI are quite sensitive to the exogeneity assumption, as we find much different estimates in many industrial sectors when we treat environmental regulations as endogenous. In addition, empirical results from our instrumenting regression equations provide insights not heretofore shown: corruption influences the supply of relevant public goods as well as the level of environmental regulation. These findings have clear new implications for policymakers, and provide avenues for future empirical and theoretical work on FDI, corruption, and the environment.