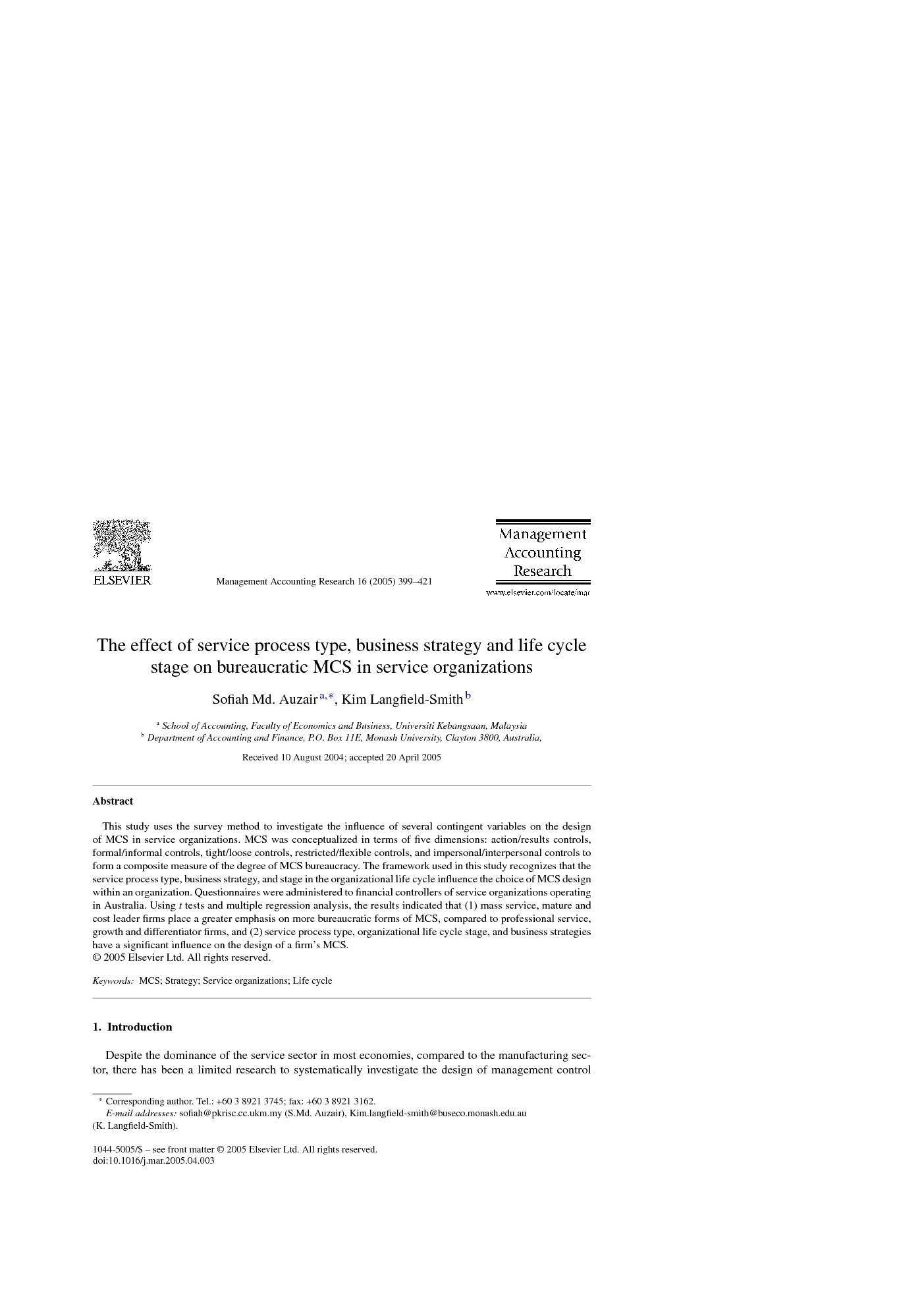 This study uses the survey method to investigate the influence of several contingent variables on the design of MCS in service organizations. MCS was conceptualized in terms of five dimensions: action/results controls, formal/informal controls, tight/loose controls, restricted/flexible controls, and impersonal/interpersonal controls to form a composite measure of the degree of MCS bureaucracy. The framework used in this study recognizes that the service process type, business strategy, and stage in the organizational life cycle influence the choice of MCS design within an organization. Questionnaires were administered to financial controllers of service organizations operating in Australia. Using t tests and multiple regression analysis, the results indicated that (1) mass service, mature and cost leader firms place a greater emphasis on more bureaucratic forms of MCS, compared to professional service, growth and differentiator firms, and (2) service process type, organizational life cycle stage, and business strategies have a significant influence on the design of a firm's MCS.

Despite the dominance of the service sector in most economies, compared to the manufacturing sector, there has been a limited research to systematically investigate the design of management control systems (MCSs) in service organizations (Shields, 1997, Drury, 1998, Sharma, 2002 and Chenhall, 2003). The literature frequently cites the distinguishing characteristics of “pure” services from tangible goods produced in manufacturing firms as posing important implications for control in service organizations (e.g., Brignall et al., 1991 and Modell, 1998), as they may prevent the direct applicability of management accounting systems and MCS established in the manufacturing sector, to the service sector (Dearden, 1978). The unique characteristics of pure services include (1) intangibility of services, (2) inseparability of production from consumption, where customers are also involved in the production of services, (3) perishability of services, where services not consumed are lost, and (4) heterogeneity in service products, where services provided by the same person may differ between customers or differ at different times (Fitzgerald et al., 1991, Hope and Muhlemann, 1997 and McColl et al., 1998). An important feature of service firms relevant to the design of MCS is the significant human participation in the “production process”. Several case studies have demonstrated the process and design of MCS in service organizations and it has been suggested that the role of MCS expounded in manufacturing organizations requires a re-orientation to be effectively implemented within service organisations (e.g., Abernethy and Stoelwinder, 1991 and Abernethy and Stoelwinder, 1995). These studies imply that service organizations are somehow unique, requiring special attention. Nevertheless, Sharma (2002) noted that much of the research undertaken in the service sector has focused on not-for-profit organizations. Thus, the need to re-orientate MCS suggested by these studies may stem from differences in the nature of operations and the organizational context between manufacturing and non-profit service firms, rather than from differences in the characteristics of service versus manufacturing organizations. The shared goal of profitability would make profit-oriented service organizations more like manufacturing firms, and more likely to implement and utilize MCS (Sharma, 2002). This suggests that it is possible to approach studies of MCS design in service organizations based on this common ground, rather than merely focusing on their uniqueness. Prior studies of MCS in service organizations have tended to be case studies and have focused on organizations in a single industry (e.g., the health care industry or communications industry) or on a single organization (see, e.g., Marginson, 1999). As service industries span retail, health care, education, hospitality and professional services, limited generalizations can be drawn from such a narrow focus. Thus, it is hardly surprising that our knowledge of MCS in specific service industries and contexts is limited (Modell, 1996 and Modell, 1998). The purpose of this paper is to add to the limited body of knowledge of the design of MCS in service firms. Specifically, this paper will adopt a contingency approach and use empirical analysis to identify the influence of specific organisational variables on the design of MCS in service organizations across several industries. The contingency approach has been subject to some criticism, particularly in relation to variable definition and measurement and its reliance on traditional functionalist theories rather than consideration of interpretative and critical views (see, e.g., Covaleski et al., 1996 and Hartmann and Moers, 1999). However, it has also been claimed that by drawing on concepts and ideas from organizational theory, a contingency approach has much to offer in providing insights into MCS in contemporary settings, particular in service firms where there has been limited research (Chenhall, 2003). The remainder of this paper is organised as follows. First, the conceptual framework that forms the focus for this study is presented, followed by formulation of hypotheses. In the following section, the research method is outlined, detailing the sample and measurement of variables. The results of the study are then provided. The findings of the study are then reviewed and major themes are discussed. In the final section, the limitations of the study are presented and areas for future research are suggested.

This study draws on prior research and uses a contingency approach to identify variables that are relevant to the design of MCS in service organizations. The theoretical framework of this study combined literature from various perspectives, including areas that have received vast attention in MCS studies, namely, business strategy, and areas that have received scant attention, namely, service process type and organizational life cycle. To some extent, findings of the current study reconfirm prior studies. However, this study also offers several new insights into the design of MCS in service organizations. Prior research provides only fragmented evidence on the nature of the relationships between the selected variables, and in some circumstances, where appropriate, evidence from the manufacturing sector was adopted to justify specific relationships. Considering the exploratory nature of this study, this study began by testing the direct relationships between the contingent variables of service process type, business strategy and life cycle stage, and MCS. In general, the results suggest: 1. Mass service firms place a greater emphasis on a more bureaucratic MCS than professional service firms. 2. Firms pursuing a cost leadership strategy place greater emphasis on a more bureaucratic MCS than firms pursuing a differentiation strategy. 3. Firms in the mature stage of their life cycle place a greater emphasis on a more bureaucratic MCS than firms in the growth stage. These findings lend support to prior studies undertaken in similar areas (see, e.g., Otley and Pierce, 1995, Eisenhardt, 1985, Abernethy and Brownell, 1997, Van der Stede, 2000, Sim and Teoh, 1997, Miller, 1988 and Miller and Friesen, 1984), although these prior studies adopted a fragmented approach. The ability to support findings for the various dimensions of MCS in a single model is an important finding to this study, as it confirms the multidimensional nature of the MCS construct developed in this study. Hypothesis 4 proposed multivariate relationships between all the contingent variables and MCS. Logically, a variable that influences the MCS of an organization individually should also influence MCS in that organization in combination with other variables. The results generally suggest that mass service firm, cost leader and mature organizations are more likely to adopt a more bureaucratic MCS, compared to professional service firm, differentiator and growth organizations. The results provide support for the hypotheses developed to extend an earlier challenge to include multiple contingencies in investigating MCS contingent relationships (Fisher, 1995, Fisher, 1998 and Simons, 1995). However, the results for the whole sample appear to be driven by the larger firms in the sample. This study makes the following contributions. First, rather than simply listing an inventory of possible controls, in response to Amigoni (1978), Langfield-Smith (1997) and Chenhall (2003), in this study MCS is conceptualized as a multi-dimensional construct, on a continuum from less bureaucratic to more bureaucratic. A comprehensive measure of MCS, consisting of six dimensions, is developed to support this model. Second, while the Silvestro et al. (1992) framework for service process type has been used in several qualitative case studies, in this study, a new instrument is developed to allow it to be measured empirically. This measure needs to be further validated in subsequent quantitative studies. Third, the construct of organisational life cycle is introduced as a contingent variable that influences the MCS design. There has been very limited research in MCS that has considered this potentially important construct. Finally, while most prior research has focused on MCS in manufacturing firms, this study focuses on a range of service firms and contributes to the meagre knowledge that we have about contextual variables that influence the design of MCS in service industries