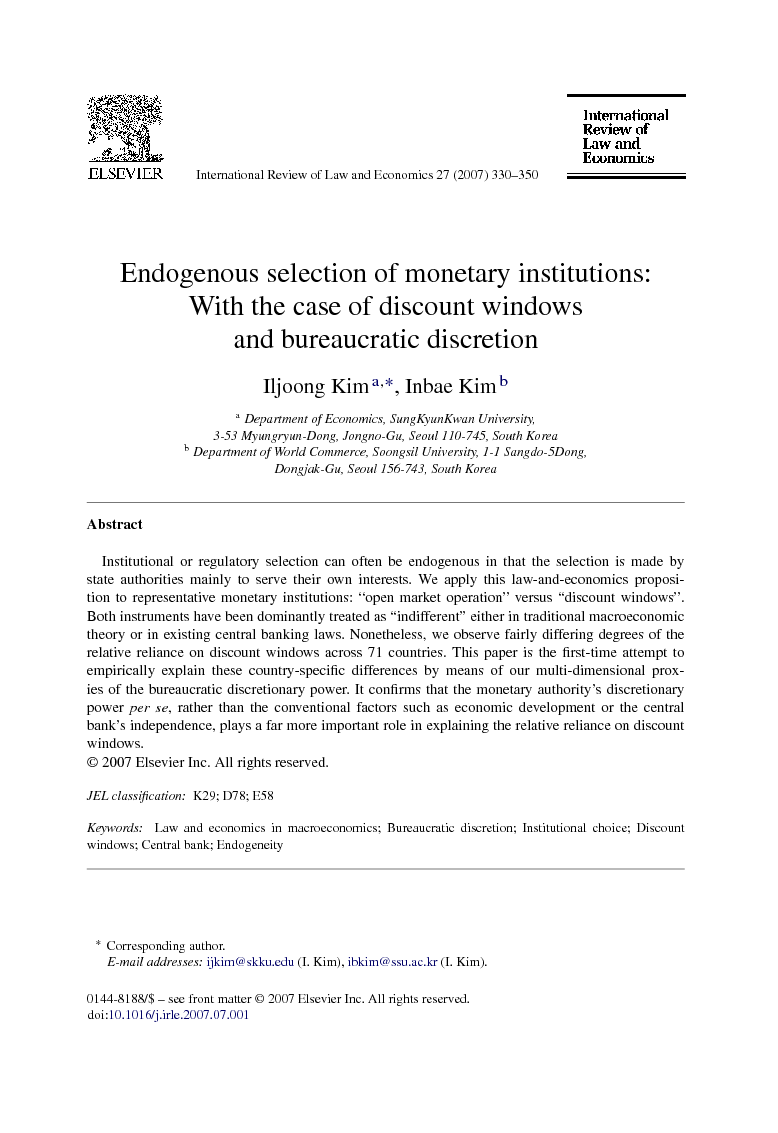 Institutional or regulatory selection can often be endogenous in that the selection is made by state authorities mainly to serve their own interests. We apply this law-and-economics proposition to representative monetary institutions: “open market operation” versus “discount windows”. Both instruments have been dominantly treated as “indifferent” either in traditional macroeconomic theory or in existing central banking laws. Nonetheless, we observe fairly differing degrees of the relative reliance on discount windows across 71 countries. This paper is the first-time attempt to empirically explain these country-specific differences by means of our multi-dimensional proxies of the bureaucratic discretionary power. It confirms that the monetary authority's discretionary power per se, rather than the conventional factors such as economic development or the central bank's independence, plays a far more important role in explaining the relative reliance on discount windows.

Law and economics scholars recognize that legislation vis-à-vis common laws can more frequently be the outcome of a political market dominated by narrowly focused interest groups. Thus, one can submit that institutional selections are “endogenous” in that they are manipulated mainly by institution-enforcers, usually bureaucrats. They act as agents to the legislature, but, sometimes, with significant institution-selecting discretion, attempt to capture some of the wealth. Given that law and economics studies on macroeconomic or monetary laws have somehow been relatively scarce, this paper applies the aforementioned endogeneity perspective to the selection of the two representative central-banking institutions: discount windows versus open market operation. We all are familiar with, and have taught to students, the popular statement: “The Fed has three tools in the monetary toolbox: open market operations, reserve requirements, and the discount rate” (Mankiw, 2001, p. 619). The three institutions are assumed to be “indifferent” and/or “simply substitutable”. Except for the case of the reserve requirement, an indifferent treatment of open market operation and discount windows underlies most macroeconomics textbooks, too.1 In fact, the case is overwhelming for this indifference assumption in most macroeconomic theories and major monetary policy debates. This indifference presumption is also reflected in the central bank laws of many countries. According to our random survey of 30 countries, as shown in Appendix A, all three monetary instruments are listed in the central bank acts of 20 countries. In 29 countries, open market operation and discount windows are used. Nevertheless, we were not able to find a statutory provision explicitly indicating any difference or preference concerning these listed instruments. In spite of this indifference treatment in both economics textbooks and statutory provisions, observing a significance difference in their actual uses rendered us suspicious of it. We express doubt about it particularly since we encountered a claim by a prominent macroeconomist himself (Poole, 1990, p. 266): “A subsidy discount rate serves no monetary policy purpose, and so it is worth exploring the advantages to the Fed of providing subsidies to banks through the discount window”. Since then, as will be summarized in Section 3, we have been able to find a group of economic literature criticizing varying inefficient features and opportunistic incentives embedded in discount windows. We have also figured out that the discount window is likely to confer more benefits upon monetary authorities than does open market operation. In a related context, we believe, it is the bureaucrats’ discretionary power that mainly allows the central bank to lean back toward the discount window despite its inferiority.2 The purpose of this paper lies in a first-time empirical verification regarding bureaucratic discretion and the selection of a monetary institution, the discount window. We hope this paper to cast critical implications to a host of countries for enhancing meaningful “transparency” in central banking institutions, which has recently come to the fore of academic and policy attention.3 For this purpose, in Section 2, we first examine the systematic differences in the reliance on discount windows in four countries over three decades, and subsequently cross-section discrepancy still prevailing these days in 71 countries. Section 3, based on the existing literature and our additional statutory observations, investigates the incentive structures underlying the discount window in terms of supply and demand, in order to infer existence of a strong preference over it on the part of the monetary authorities. We also infer that their discretionary power can be exercised better with discount windows. It is accordingly hypothesized that ceteris paribus bureaucrats would rely more on discount windows as they possess greater discretionary power to implement their preferred institution: discretionary power ⇒ discount windows. To be sure, anecdotal evidence abounds concerning the above hypothesis, but its substantiation has by no means been easy. Section 4 starts with potential (and orthodox) determinants of the reliance on discount windows across countries. We then carefully develop our four distinctive proxies of bureaucratic discretion: intra-governmental constraint on their discretion, existence of a policy partner to directly utilize discretionary power, financial leverage to discretion in discount windows, and overall level of discretion in the public sector. We intend these proxies to be multi-dimensional, if not entirely exhaustive. Upon obtaining estimation results fairly indicative of our hypothesis in Section 5, we conclude our discussion and suggest future research in Section 6.

Selection of monetary institutions is often “endogenous” in that it is manipulated by monetary authorities, mainly to serve their own interests at the margin. We have applied this proposition to explain inter-country differences in the relative reliance on discount windows vis-à-vis open market operation. Nevertheless, an existence of the bureaucratic (de facto unlawful) benefits associated with discount windows is hard to substantiate, despite sometimes anecdotal evidence. Indeed, an empirical proof of such endogeneity embedded is a tough task inherently because “disentangling economic (i.e. public interest) and political influences” (Crone & Tschirhart, 1998, p. 106) is usually difficult. We have endeavored to overcome this barrier. Based on the existing theoretical arguments, statutory examinations, and preliminary reviews of data, we first established: Discount windows are more likely to allow monetary authorities not only to extract private benefits to themselves but also to exercise their bureaucratic discretion more freely than in open market operation. As a result, we came to a testable hypothesis that greater discretion would cause a higher level of reliance on discount windows ceteris paribus. Our next main task was scrutinizing and designing four multi-dimensional proxies of discretion. This paper is the first-run attempt to empirically explain cross-country differences in relative reliance on discount windows through bureaucratic discretionary power, of course, with other standard economic variables. It has confirmed that the monetary authority's discretionary power per se, rather than the conventional factors such as economic development and the central bank's independence or than the casual justification regarding central bank's market intervention, plays a far more important role in explaining its relative reliance on discount windows.