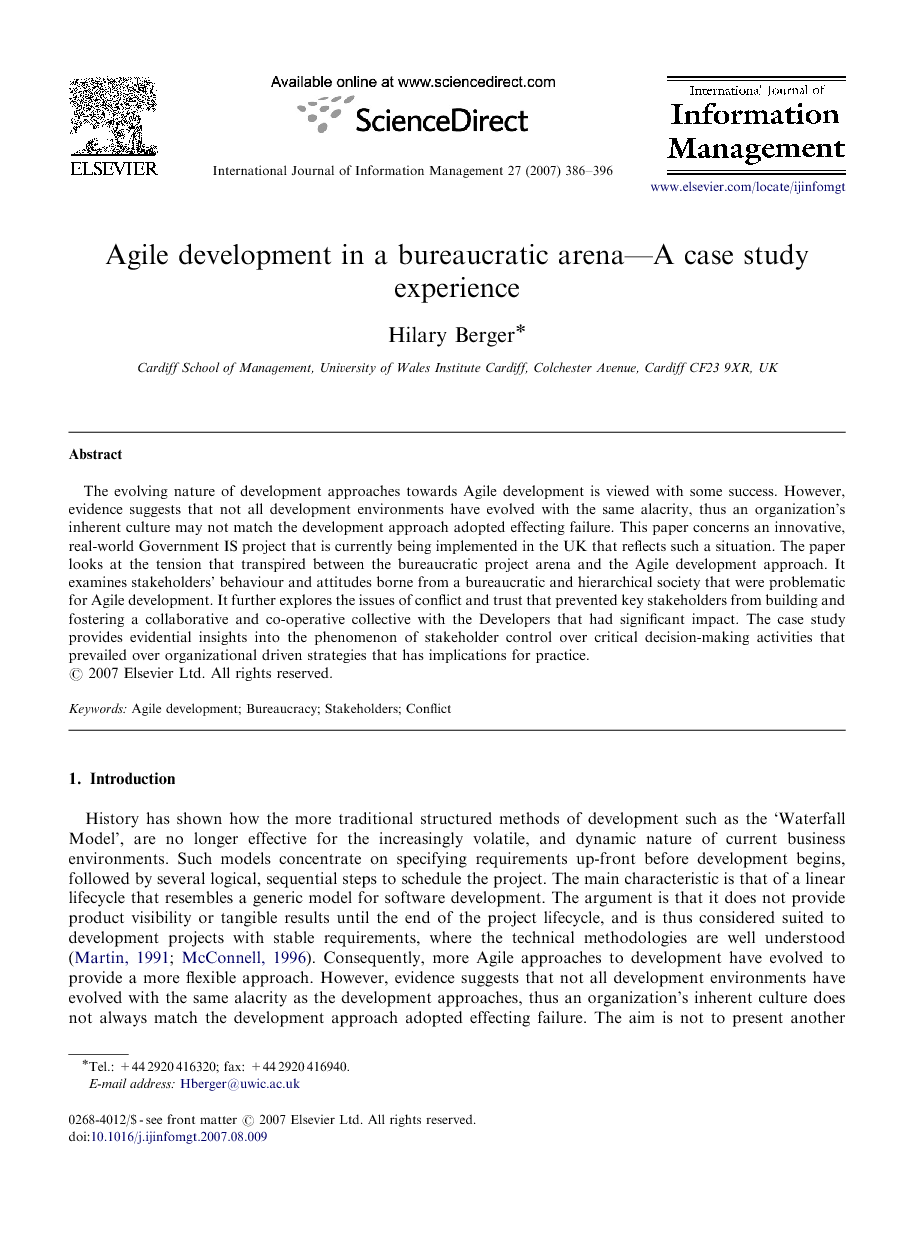 The evolving nature of development approaches towards Agile development is viewed with some success. However, evidence suggests that not all development environments have evolved with the same alacrity, thus an organization's inherent culture may not match the development approach adopted effecting failure. This paper concerns an innovative, real-world Government IS project that is currently being implemented in the UK that reflects such a situation. The paper looks at the tension that transpired between the bureaucratic project arena and the Agile development approach. It examines stakeholders’ behaviour and attitudes borne from a bureaucratic and hierarchical society that were problematic for Agile development. It further explores the issues of conflict and trust that prevented key stakeholders from building and fostering a collaborative and co-operative collective with the Developers that had significant impact. The case study provides evidential insights into the phenomenon of stakeholder control over critical decision-making activities that prevailed over organizational driven strategies that has implications for practice.

History has shown how the more traditional structured methods of development such as the ‘Waterfall Model’, are no longer effective for the increasingly volatile, and dynamic nature of current business environments. Such models concentrate on specifying requirements up-front before development begins, followed by several logical, sequential steps to schedule the project. The main characteristic is that of a linear lifecycle that resembles a generic model for software development. The argument is that it does not provide product visibility or tangible results until the end of the project lifecycle, and is thus considered suited to development projects with stable requirements, where the technical methodologies are well understood (Martin, 1991; McConnell, 1996). Consequently, more Agile approaches to development have evolved to provide a more flexible approach. However, evidence suggests that not all development environments have evolved with the same alacrity as the development approaches, thus an organization's inherent culture does not always match the development approach adopted effecting failure. The aim is not to present another model, framework or proposal to address this issue but rather through the analysis of the data gathered to offer an empirical perspective and increase the understanding of such difficulties from which lessons can be drawn. Thus, there is no one question that can be answered but rather it is important to draw upon empirical research experiences so that validated conclusions can inform the IS domain, which is a key contribution of this paper. Organizational culture is described as the sum total of beliefs, meanings and values, the accepted behaviours and the political environment of a company (Bliss, 1999; Hodges & Hernandez, 1999). In essence it can be defined as the pattern of basic assumptions, and shared norms that are accepted and used by the organization. Implicit is the ‘routinized’ character of peoples’ day-to-day activities that become internalized such that they may be autonomous. Such behavioural routines create repeated patterns of behaviour (Giddens, 1984 cited in Bessant, 2003). Also it is often the case that the ‘actual’ working culture of an organizational may differ from the organization's own perceived culture. As a consequence, this can prove problematic for IS development arenas that expect ‘given’ traditions. This research paper examines such a situation. It investigates the difficulties experienced when an Agile development approach was imported into the project arena of a bureaucratic environment. Within a bureaucratic context the emerging culture will be influenced by its endemic structure and culture—this is ‘the way we do things around here’ (Bessant, 2003, p. 38). A structured rationality is endemic within bureaucratic environments; hence, they are common to government public sector departments. We refer to Weber's Model of Bureaucracy where authority was rational, legal and based on status and position, not on the personalities that are organized in a hierarchy of authority. Bureaucracy is a form of organization that is based on strict rules and competencies attached to positions (Hofstede, 2003). Indeed Wallach's Organizational Culture Index profiles a bureaucratic culture as being hierarchical, procedural, structured, ordered, regulated, established, cautious, and power orientated (Wallach, 1983). Bureaucrats make decisions by processing information with reference to predetermined rules. Accordingly, management emphasis is on order, uniformity, and consistency where organizational hierarchies provide channels for decision-making (Carnall, 2003). The purpose is to limit the capacity of individuals by exercising control over their activities and decision-making processes. Such a culture determines that people are fallible, and when allowed to make choices often make mistakes. Thus, procedures and practices are put in place that prevent employees from making those mistakes (Pope, 1996). Consequently, a linear approach to decision-making is the norm, and one that requires the contribution of other people further up the management hierarchy (Morgan, 1986). It is this understanding of a bureaucratic culture that describes the context of the research study. For this case study, the development environment represents a bureaucratic culture that is typical of government projects. The inherent values and beliefs are linked to core competencies that are embedded within the organizational protocol rather than in a shared collective. This organizational protocol played a significant role in determining stakeholders working patterns, behaviour and attitudes that would appear to have affected the development arena (Jewels & Berger, 2005; McDermott & O’Dell, 2001). This paper examines how organizational value invested in protocols and procedures engendered a level of stakeholder authority that governed the decision-making activities and prevailed over organizational driven strategies. This not only proved challenging for the case study arena but also had a direct impact on the Agile development approach in terms of missed development schedules and project delay that has implications for practice in similar development milieux. This paper therefore not only offers ‘rich insight’ from empirical research into the issue of adopting Agile development within a bureaucratic arena, but also provides insight into the conduct of the key stakeholders’ operating within this contextual situation that had significant impact upon project success. This paper is organized as follows: Section 2 sets out the research approach and theoretical setting, Section 3 describes the background to, and the context of the case study setting. Section 4 explores the problems experienced in the project arena, it looks at issues of trust and conflict and the factors involved, it examines the problems associated with the cooperation and collaboration of stakeholders and the decision-making activities that had implications for the project. Finally, Section 5 presents the conclusions drawn from the empirical data.

This paper has attempted to offer rich and meaningful insight into the tension that transpired between the case study's bureaucratic project arena and the Agile development approach adopted. It examines key stakeholders’ behaviour and attitudes borne from a bureaucratic and hierarchical society that were problematic for the Agile approach incurring project delays. It further explored the issues of conflict, trust and a risk adverse blame culture that prevented key stakeholders from building and fostering a collaborative and co-operative collective with the Developers that had significant impact upon project development progress. It is evident that a climate of trust, co-operation, collaborative and flexible working practices coupled with authoritative fast decision-making are necessary if iterative development is to succeed. In this case, the bureaucratic culture was contrary to Agile development, and in particular, problematic within a persistent blame culture environment. The inference is that despite high levels of commitment by senior management to the remove the blame culture, the inherent working culture proved the stronger. This has implications for other similar projects. We emphasize how the organization's culture influenced stakeholder behaviour. Thus, inherent organizational protocols play a significant role in determining stakeholders working patterns, behaviour and attitudes that have significant practical implications. We have seen how the benefits of Agile development can be negated by a misplaced loyalty to inherent working practices and protocols where the legacy thinking processes are carried forward into the project arena. Thus, it can be said that stakeholders, in this case the Business Managers, may possess a ‘perceived’ authority and control that can influence the outcome of the development approach. This introduces a hitherto unaddressed risk for Agile development projects.