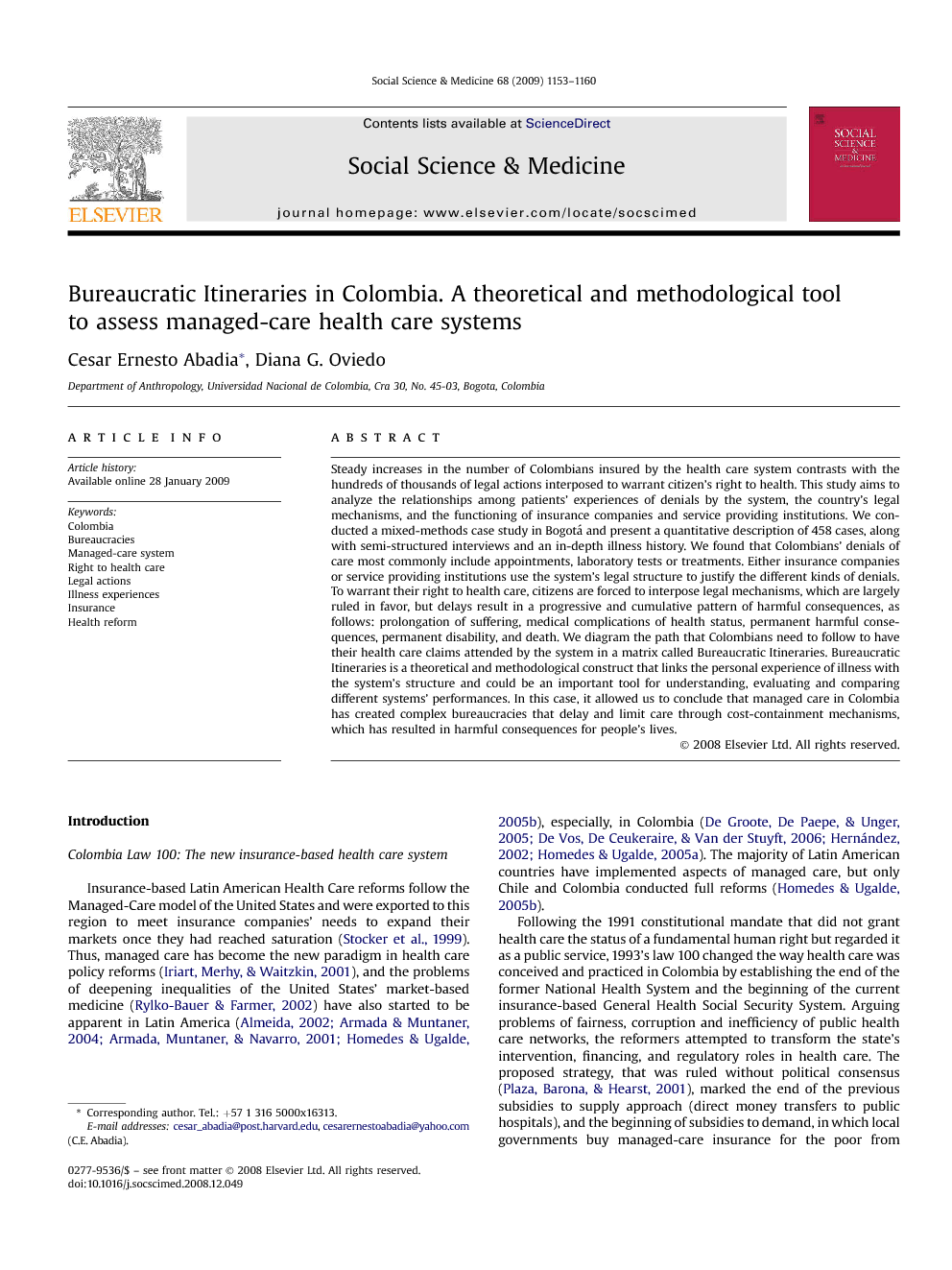 Steady increases in the number of Colombians insured by the health care system contrasts with the hundreds of thousands of legal actions interposed to warrant citizen's right to health. This study aims to analyze the relationships among patients’ experiences of denials by the system, the country's legal mechanisms, and the functioning of insurance companies and service providing institutions. We conducted a mixed-methods case study in Bogotá and present a quantitative description of 458 cases, along with semi-structured interviews and an in-depth illness history. We found that Colombians’ denials of care most commonly include appointments, laboratory tests or treatments. Either insurance companies or service providing institutions use the system's legal structure to justify the different kinds of denials. To warrant their right to health care, citizens are forced to interpose legal mechanisms, which are largely ruled in favor, but delays result in a progressive and cumulative pattern of harmful consequences, as follows: prolongation of suffering, medical complications of health status, permanent harmful consequences, permanent disability, and death. We diagram the path that Colombians need to follow to have their health care claims attended by the system in a matrix called Bureaucratic Itineraries. Bureaucratic Itineraries is a theoretical and methodological construct that links the personal experience of illness with the system's structure and could be an important tool for understanding, evaluating and comparing different systems’ performances. In this case, it allowed us to conclude that managed care in Colombia has created complex bureaucracies that delay and limit care through cost-containment mechanisms, which has resulted in harmful consequences for people's lives.

Insurance-based Latin American Health Care reforms follow the Managed-Care model of the United States and were exported to this region to meet insurance companies’ needs to expand their markets once they had reached saturation (Stocker et al., 1999). Thus, managed care has become the new paradigm in health care policy reforms (Iriart, Merhy, & Waitzkin, 2001), and the problems of deepening inequalities of the United States’ market-based medicine (Rylko-Bauer & Farmer, 2002) have also started to be apparent in Latin America (Almeida, 2002, Armada and Muntaner, 2004, Armada et al., 2001 and Homedes and Ugalde, 2005b), especially, in Colombia (De Groote et al., 2005, De Vos et al., 2006, Hernández, 2002 and Homedes and Ugalde, 2005a). The majority of Latin American countries have implemented aspects of managed care, but only Chile and Colombia conducted full reforms (Homedes & Ugalde, 2005b). Following the 1991 constitutional mandate that did not grant health care the status of a fundamental human right but regarded it as a public service, 1993's law 100 changed the way health care was conceived and practiced in Colombia by establishing the end of the former National Health System and the beginning of the current insurance-based General Health Social Security System. Arguing problems of fairness, corruption and inefficiency of public health care networks, the reformers attempted to transform the state's intervention, financing, and regulatory roles in health care. The proposed strategy, that was ruled without political consensus (Plaza, Barona, & Hearst, 2001), marked the end of the previous subsidies to supply approach (direct money transfers to public hospitals), and the beginning of subsidies to demand, in which local governments buy managed-care insurance for the poor from competing insurance companies (Gaviria et al., 2006 and Plaza et al., 2001). The provision of services was to adopt a “structured pluralism” model, defined as an organizing structure with explicit rules and functions for the interactions of a choice exerting population, a modulating state, a financing social security network of institutions, and an increased pool of service providers (Londoño & Frenk, 1997). This structure, considered the first large-scale experiment with managed competition in the developing world, depended on the state's regulation of a market of new health care insurance companies (EPS—Empresas Promotoras de Salud), service provider institutions (private clinics became IPS—Instituciones Prestadoras del Servicio and public hospitals were transformed into companies, ESE—Empresas Sociales del Estado), and consumers, who would exert power by choosing the best services from different options, given that risk adjusted premiums are fixed by the state ( Londoño and Frenk, 1997 and Plaza et al., 2001). By changing the financing of the health care services, the new system required definitions of levels of care to be provided according to the adjusted premium (Resolution 5261 of 1994), and stratification of users according to their payment capability with the intention of eliminating free of charge care, recovering costs, and earning money to pay foreign debt (OPS, 2002). Citizens with higher payment capability are required to purchase private health care insurance plans (11% of their income, Contributory Regime), which consists of a standard benefit package with three levels of care (I basic, II intermediate, and III complex) that are part of the Health Obligatory Plan (POS-Plan Obligatorio de Salud). In addition, 1.5% of their income is transferred to a fund that along with other sources of financing, such as taxes, is used by the state to pay subsidized policies for people without payment capability (Subsidiary Regime), who receive only the first level of care plus a few treatments included in levels II and III of the contributory regime (Resolution 306 of 2005) in a package known as Subsidized-Health Obligatory Plan (POS-S). Although these differences in what is covered by each plan were intended to be temporary, the discrepancies between the two systems have persisted, leading to a historical consolidation of class-based inequalities in regards to health care in Colombia (Hernández, 2002). A transitioning period was proposed with the goal of universal coverage in 2000. When people are outside of the two regimes, that is when they have proven that they cannot afford private insurance and subsidized insurance companies also do not affiliate them arguing lack of expanding-users capability, they are called, paradoxically, insiders (vinculados). Insiders receive care in public hospitals in an event by event basis through funds that health care secretariats allocate to the hospitals. All people, however, according to income and type of affiliation to the system, including insiders, are asked to pay a fixed amount for each consultation, exam or prescription, or a percentage of the particular service or event they require.

From January 2006 to December 2007, 458 people sought to initiate legal actions through Salud al Derecho, 283 (61.8%) women and 175 (38.2%) men. From the 0–6 scale used to stratify Colombians based on their socioeconomic status, 87.3% belonged to the three lowest levels (0, 1 and 2) which is utilized as a poverty index and means that they qualify for subsidized health care insurance. Of the total sample size, 15.75% were younger than 18; 30.34% were within the 19–40 age range; 27.07% were within the 41–55 age range; 22.48% were older than 56; and 4.36% did not indicate their age. When citizens arrived to the health care institutions, 17% were denied the assessment of their medical problem, (including first time appointments with the primary care doctor or specialists, follow ups, or changing the institution/provider). If seen by the health care professional, we found that people were denied either the laboratory tests (24.9%) or the required treatment (45%), which included medications (21.4%), surgeries (13.1%), or supplies/equipment and other materials (10.5%) (i.e., glasses, colostomy bags, glucometers, catheters, girdles, mechanical sutures, etc.) (Table 1). All institutions (EPS, IPS, or ESE) express different justifications for the health care activities they deny. We found that the kinds of justifications that entities give for denying care are in fact failures of the system that can be classified in five categories (Table 1): (1) Administrative Problems with the Insurance-Based System (APIBS) includes cases in which people cannot change institutions or providers, do not appear in the system, have two or more affiliations, have not fulfilled all administrative requirements, or are insiders. (2) Economic Barriers (EB) includes delays in monthly payments of their policies or recovery cost quotas, which includes a range of extra payments charged both to people from the contributory and subsidiary regimes and to insiders and are based on the cost of each service and the individual's socioeconomic level. (3) Institutional Deficiencies (ID) means lack of human and physical resources or a mismatch in people's expectations of care and the treatment provided, referred to as poor quality of the service, or when the institutions claim that users do not need a prescribed treatment. (4) Problems of Limited Coverage of the Policy (PLCP) is when people are told that their required service is not covered by the POS. (5) No Apparent Denial, Other Complaints, and Unknown (ND/O/U).Legal actions were interposed against many different health care system institutions; 48.47% belonged to the subsidiary system and interposed legal actions against 21 different Subsidiary EPSs, 36.24% belonged to the contributory system and interposed legal actions against 20 different Contributory EPSs, and 14.64% were insiders and interposed legal actions against the regional health care secretariat, the institution legally obliged to provide for their care (0.65% were unknown in terms of affiliation). The most common and effective legal action, Writ, needs support documents that make evident the denial of services. In cases in which institutions refuse to give any documentation, people need to ask for an official response through a Right to Petition, to which a written answer should be produced in fifteen working days. Challenge (when citizens disagree with the first ruling), Contempt of Court/Motion for Reversal (when institutions do not comply with the ruling) were less common. The fact that giving verbal advice, in many cases, was effective at solving access and quality of care problems regardless of people's socioeconomic level or type of policy (data not shown) not only speaks to the complexity of the system's bureaucracy, but also to the fact that people need institutional support to have their claims heard and solved (data not shown). Our data also confirmed that people's social and cultural capitals (including educational level) help them overcome the obstacles imposed by the system, including the use of the legal mechanisms, which has been discussed as individual tools that protect rights yet deepen inequalities (Hernández, 2002). Although the majority of the legal actions were ruled in favor of the citizens (84.27%), people's stories demonstrated that the process of health care seeking, denial, interposing legal mechanisms and waiting for their results to start treatment had increased their suffering and, in many cases, had been detrimental for their health. We identified a progressive and cumulative pattern of harmful consequences in people's narratives about the aforementioned process and constructed the qualitative category Consequences of the denial of the right to health for the person's life (Table 2).