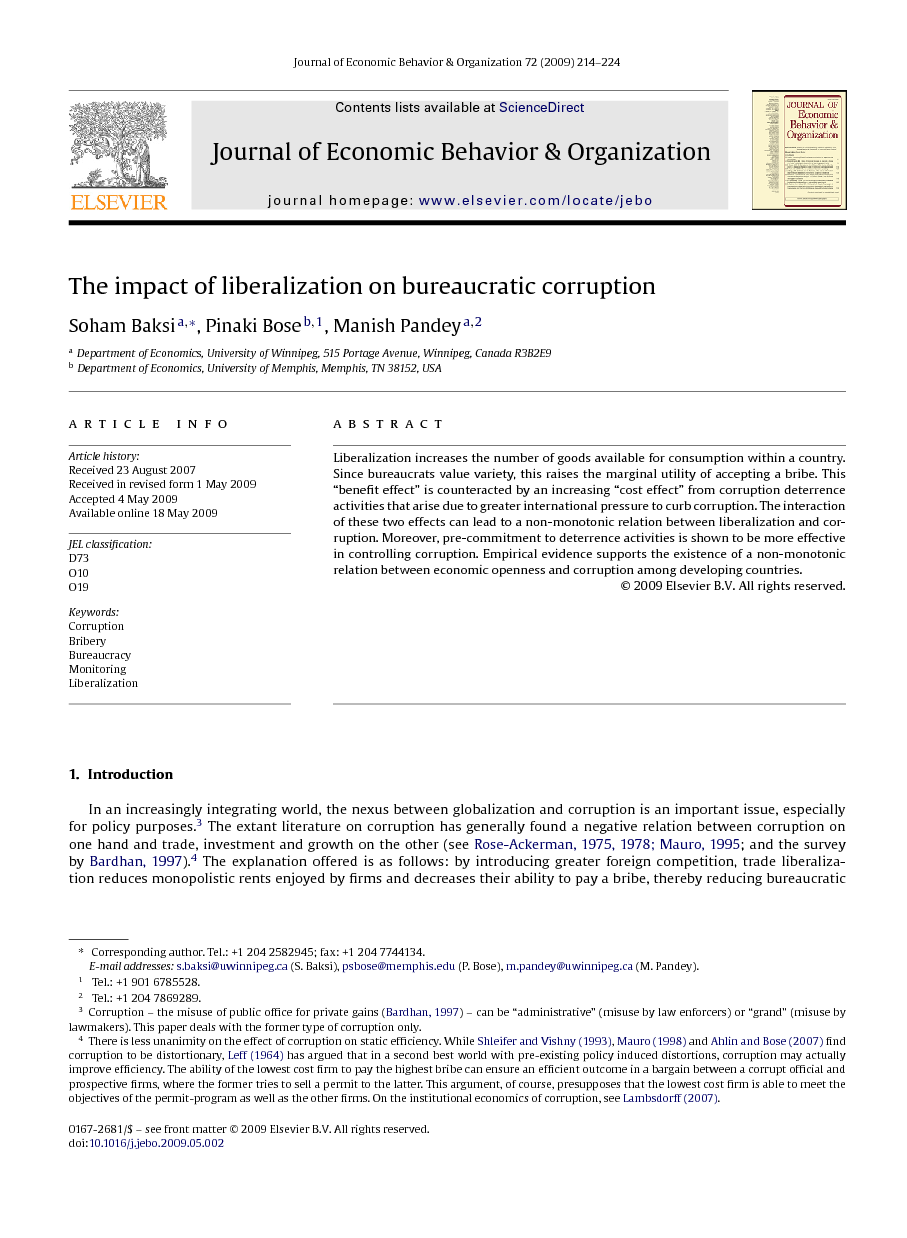 Liberalization increases the number of goods available for consumption within a country. Since bureaucrats value variety, this raises the marginal utility of accepting a bribe. This “benefit effect” is counteracted by an increasing “cost effect” from corruption deterrence activities that arise due to greater international pressure to curb corruption. The interaction of these two effects can lead to a non-monotonic relation between liberalization and corruption. Moreover, pre-commitment to deterrence activities is shown to be more effective in controlling corruption. Empirical evidence supports the existence of a non-monotonic relation between economic openness and corruption among developing countries.

In an increasingly integrating world, the nexus between globalization and corruption is an important issue, especially for policy purposes.3 The extant literature on corruption has generally found a negative relation between corruption on one hand and trade, investment and growth on the other (see Rose-Ackerman, 1975, Rose-Ackerman, 1978 and Mauro, 1995; and the survey by Bardhan, 1997).4 The explanation offered is as follows: by introducing greater foreign competition, trade liberalization reduces monopolistic rents enjoyed by firms and decreases their ability to pay a bribe, thereby reducing bureaucratic corruption.5 One exception to this general finding is Ades and Di Tella (1999), who show that if corruptible officials are paid an efficiency wage to induce honest behaviour, the effect of increasing competition on corruption is ambiguous. By reducing profits of oligopolistic firms, competition reduces the efficiency wage as it becomes less attractive to induce honesty, but, at the same time, any level of wage deters more corruption as the gains to corrupt officials fall with competition. As a result of these two contradictory effects, equilibrium corruption can either rise or fall with competition. The empirical evidence on how openness affects corruption across countries has been mixed. In contrast to the ambiguous nature of their theoretical predictions, Ades and Di Tella's (1999) empirical results showed that foreign competition (as proxied by import to GDP ratio and other variables) negatively affects corruption. Similarly, Wei, 2000a and Wei, 2000b and Gatti (2004) found an inverse relation between openness and corruption. Treisman (2000), however, reported a “surprisingly small” negative relation between corruption and openness to trade (measured by import to GDP ratio).6 The ambiguity evident in the literature, notably in Ades and Di Tella (1999) and Treisman (2000), seems to suggest that the relation between openness and corruption is more complex and may even be non-monotonic in many countries due to the interplay of opposing factors that are inherent in globalization.7 A positive relation between openness and corruption is borne out by the initial experience of the transitional economies of Eastern Europe and erstwhile USSR, “where essential steps to privatize the economy and rewrite the rules of commerce after the demise of socialism were often accompanied by widespread corruption” (Transparency International, 2005, p. 271). However, there is recent (1999–2002) evidence to support the view that “the prevalence and costs of some types of corruption are becoming more moderate in many countries in the region” (Transparency International, 2005). The purpose of the present paper is threefold. First, we explore a different (from those explored in the existing literature) channel through which economic openness can induce corruption among public officials. Second, we provide a possible explanation as to why the relation between economic openness and corruption may be non-monotonic in some countries. Lastly, we provide empirical evidence which indicates the existence of such a relationship in some countries. In this sense, our empirical analysis moves away from the existing literature which is preoccupied with estimating the linear relationship between openness and corruption. The different channel, referred to above, is as follows: liberalization typically increases imports, and imports introduce new goods and services to consumers of liberalized economies.8 This effect is likely to be stronger in developing countries, which lack the ability to produce many goods and depend on imports to make them available. Availability of more products increases the marginal utility of consumers’ income, given that they have a taste for variety. In particular, this will also increase the corruptible officials’ marginal utility of bribe income and increase their incentive to be corrupt. Thus liberalization, by increasing the allure of consumerism, strengthens the propensity of officials to be corrupt (at least initially) in our model.9 But there is a second, and countervailing, effect that results from greater openness. A commonly observed attribute of globalization is that it engenders additional pressures on developing countries to reduce corruption and improve governance. For one, greater openness makes domestic corruption more “internationally visible.” Second, international bodies have a greater ability and incentive to engage and pressure more open countries to crack down on corruption.10 For instance, according to Williams and Beare (1999, p. 142), “both the IMF and World Bank have recently introduced reforms to their lending practices making the provision of funds conditional upon the successful implementation of a variety of macroeconomic and anti-corruption reforms.” Similar international anti-corruption initiatives have been launched by the United Nations (UN Convention against Corruption, 2005), African Union (Convention on Preventing and Combating Corruption, 2003), and the Organization of American States (Inter-American Convention against Corruption, 1996). Our paper models a hierarchical public administrative structure consisting of many corruptible inspectors and an honest regulator (an anti-corruption agency) who undertakes deterrence activities to reduce corruption among the inspectors. We find that an increase in the number of consumption goods increases the marginal utility of accepting a bribe, which, in the absence of deterrence activities, leads to greater corruption among the inspectors (Section 2). In the presence of monitoring by a regulator, however, corruption may not increase monotonically, especially if greater openness also results in greater pressure on the regulator to tackle corruption. This is shown in Section 3 of our paper, where we introduce the regulator. Our paper demonstrates that while greater openness initially leads to increased bureaucratic corruption, the accompanying increases in corruption-reducing activities can cause corruption to fall after some threshold of liberalization has been reached. Thus, our theoretical analysis supports the existence of an inverted-U curve in the relationship between corruption and economic liberalization. The role of pre-commitment by the regulator to her monitoring activity is also analyzed in Section 3. By credibly pre-committing to a monitoring frequency, the regulator is not only able to detect violators (which she is able to do even if she cannot credibly pre-commit) but also able to influence the optimizing behaviour of the corruptible inspectors. Hence, we find corruption to be less under pre-commitment. Section 4 deals with the empirical analysis, where we find evidence of a non-monotonic relation between liberalization and corruption in lower income countries. The last section concludes.

We have shown that an inverted-U curve can describe the incidence of bureaucratic corruption that accompanies increased levels of economic openness in developing countries. This result was derived analytically for total corruption when the regulator is unable to pre-commit (Proposition 2), and numerically for the other cases (Result 1 and Appendix A). Moreover, the regulator's ability to credibly pre-commit to deterrence activities is shown to have a detrimental effect on corruption (Proposition 3). Empirically we found evidence for a non-monotonic relation between corruption and openness (as proxied by import–GDP ratio) among lower income countries. It should be pointed out that if liberalization decreased (increased) profitability in some sectors of the economy, it would decrease (increase) the willingness of firms in those sectors to pay a bribe, and thus decrease (increase) corruption only among public officials enforcing regulations in those sectors. We, however, did not model this obvious link between liberalization and corruption. In our model, the positive effect of liberalization on corruption comes through another, less obvious, channel: the higher willingness of all officials, enforcing regulations in all sectors of the economy, to accept a bribe (Proposition 1). Thus, our result suggests that the impact of liberalization on corruption will be sectorally more widespread than what is suggested by the obvious channel.