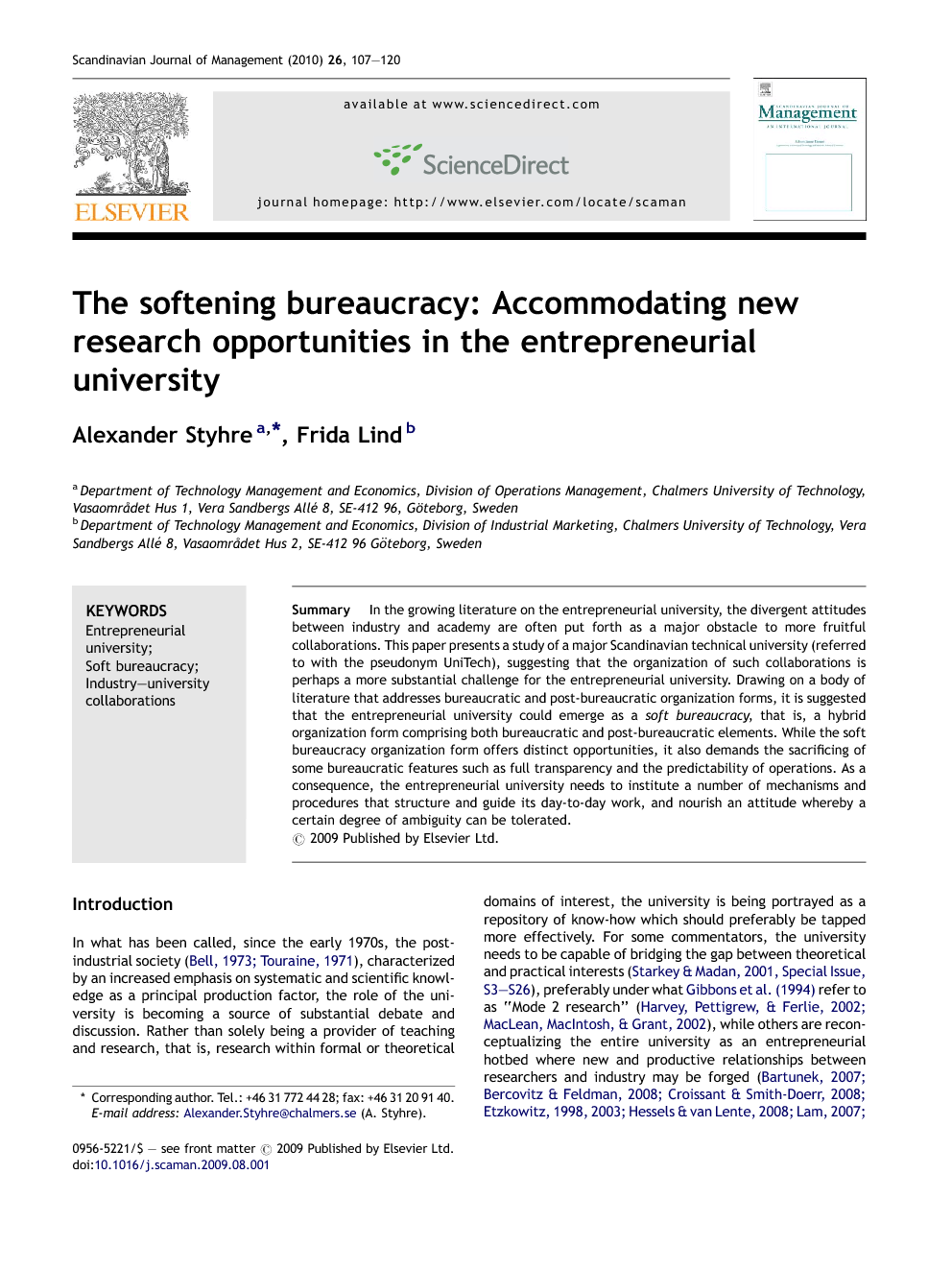 In what has been called, since the early 1970s, the post-industrial society (Bell, 1973 and Touraine, 1971), characterized by an increased emphasis on systematic and scientific knowledge as a principal production factor, the role of the university is becoming a source of substantial debate and discussion. Rather than solely being a provider of teaching and research, that is, research within formal or theoretical domains of interest, the university is being portrayed as a repository of know-how which should preferably be tapped more effectively. For some commentators, the university needs to be capable of bridging the gap between theoretical and practical interests (Starkey & Madan, 2001, Special Issue, S3–S26), preferably under what Gibbons et al. (1994) refer to as “Mode 2 research” (Harvey et al., 2002 and MacLean et al., 2002), while others are reconceptualizing the entire university as an entrepreneurial hotbed where new and productive relationships between researchers and industry may be forged (Bartunek, 2007, Bercovitz and Feldman, 2008, Croissant and Smith-Doerr, 2008, Etzkowitz, 1998, Etzkowitz, 2003, Hessels and van Lente, 2008, Lam, 2007, Louis et al., 1989, Murray, 2002, Murray, 2004, Nerkar and Shane, 2007, Powell and Grodal, 2005, Vestergaard, 2007 and Zucker et al., 2002). In either perspective, the university is no longer solely thought of in terms of a site dedicated to basic and formal research activities and instead becomes a node in a complex network of relations across organizational and institutional boundaries (Augier and Teece, 2007 and Powell and Grodal, 2005). Conceived in such terms, the university qua organization can no longer be thought of in terms of a strictly hierarchical organization conforming to the bureaucratic ideal-type, first formalized by Weber (1948). Instead, the university is gradually adopting mechanisms and organization forms capable of accommodating new industry–university initiatives. Drawing on the bureaucracy studies literature (Courpasson, 2000 and Jermier et al., 1992), the conventional university structure, modelled on the bureaucratic organization form, is gradually becoming softer, that is, organized less strictly in accordance with bureaucratic principles and incorporating more network-like mechanisms and forms. Using the term soft bureaucracies, the university structure is enacting a hybrid organization form that includes the conventional functional and hierarchical organization, as well as less strict and compartmentalized elements. While this hybrid form is capable of accommodating new forms of entrepreneurial initiatives, it is also putting pressure on university researchers and executives to develop what has been called ambidextrous skills, that is, the skill to think in two complementary ways in terms of both exploration and exploitation ( Gibson and Birkinshaw, 2004, Markides, 2007 and Tushman and O’Reilly, 1996). Firstly, in terms of mastering conventional research activities aimed at producing formal academic knowledge, primarily published in academic journals and hosted by the bureaucratic university structure. Secondly, university researchers need to be capable of engaging in entrepreneurial extramural activities, aimed at producing new patents, products, services, joint ventures, and firms, within the network organization developed jointly with industry. This ambidextrous capacity is a highly praised skill among what Lam (2007) calls “entrepreneurial professors”. This skill did not, however, form part of the researcher training curriculum until quite recently and thus many university professors, the literature would suggest, are facing substantial challenges when “on their way to the market” (Anderson, 2008). While much of the literature suggests that there are substantial differences in cultures and attitudes between industry and university, this paper aims to show that, while such attitudes may at times serve as an impediment to fruitful collaborations, it is primarily the internal organization of the collaborative domains that concerns these entrepreneurial activities. The principal challenge for the entrepreneurial university, thus, is to create an effective organization capable of operating in-between the regular departments/school structure and the external market. This paper presents a case study of how a Scandinavian technical university is organizing its research centers (Boardman and Corley, 2008, Boardman and Ponomariov, 2007, Bozeman and Boardman, 2004 and Toker and Gray, 2008), joint research initiatives between university and industry, in a soft bureaucratic, hybrid form. Rather than being able to handle all kinds of complementary or contradictory demands placed on these research organizations from the outset, researchers and practitioners are learning to mutually adjust objectives, goals, and work procedures to be able to accomplish shared goals. The study suggests that universities engaging in entrepreneurial activities need to be able to develop a whole range of new skills and control mechanisms, both within research centers and on university executive teams. Becoming an “entrepreneurial university” is not only a matter of attitude and having the will to bring scientific work to market, but also a matter of managerial skills and organizational structures and procedures. Therefore, the emerging entrepreneurial university is ultimately a matter of creating new organizational structures and forms that are capable of handling and accommodating diverging, or even conflicting, interests and practices. More specifically, such activities are taking place in what will be called the trading zones ( Galison, 1997 and Galison, 1999) provided by the softening university bureaucracy. The objective of this paper is thus to show that the regime of the entrepreneurial university is creating new organizational forms within the institutional domain of higher education and research. This paper is structured thus: Firstly, the concepts of the entrepreneurial university and soft bureaucracy are examined. Secondly, the methodology of the study is accounted for. Thirdly, the empirical study is presented. Finally, some implications are discussed.

In the extensive literature on the entrepreneurial university and the emergence of new forms of academic entrepreneurship, the divergences between the needs and demands of industry and those of academic researchers are often pinpointed as an impediment to closer collaboration. In the present study, such divergent interests appear relevant but of limited importance. Instead, it is the organization of the new entrepreneurial domains—here discussed as “trading zones” between industry and academy—that poses a problem for the universities and their collaborators. At UniTech, some thirty research centers within a number of disciplinary and interdisciplinary domains co-exist alongside the regular bureaucratic organization model which hosts the various departments in a functional and hierarchical organization. When the research centers are imposed upon this traditional bureaucratic structure, a series of new mechanisms, procedures, and routines needs to be established. Such mechanisms and procedures include communications between the research centers and the Vice-Chancellor's office, the departments, and the other research centers; the institutionalisation of proper control and monitoring procedures; the formulation of long term strategies and policies regarding the market positioning of UniTech and intellectual property rights; and mechanisms regulating the relationships between research centers in order to avoid cannibalizing effects. The literature on the bureaucratic organization form emphasizes the stability and predictability of this ideal, typical organization form. In contrast, the post-bureaucratic organization form offers other possibilities but is also more complicated to overview. Speaking of the new organization form of UniTech in terms of being a soft, or softening, bureaucracy thus suggests that flexibility and adaptability are new organizational virtues enabling collaboration with industry and other relevant actors. The crux is that such organizational features do not come free: the bureaucratic virtues of transparency and predictability are being abandoned, at least partly. As a consequence, the emerging entrepreneurial university has to adopt new organization forms—often various post-bureaucratic organization hybrid forms—which will in turn require new mechanisms, procedures, and leadership practices. The softening university bureaucracy will provide new opportunities but will also demand the ability to tolerate certain ambiguities.