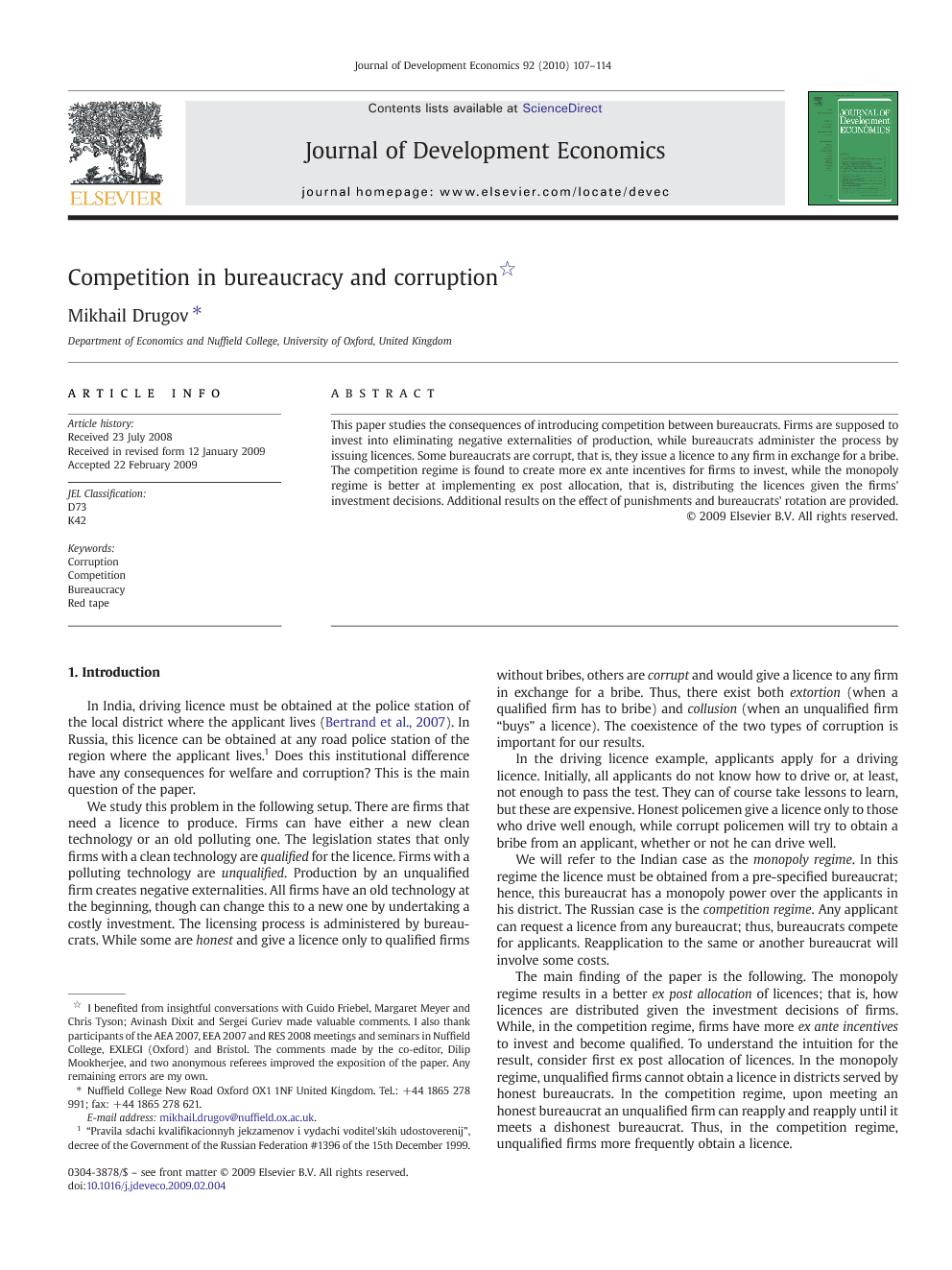 This paper studies the consequences of introducing competition between bureaucrats. Firms are supposed to invest into eliminating negative externalities of production, while bureaucrats administer the process by issuing licences. Some bureaucrats are corrupt, that is, they issue a licence to any firm in exchange for a bribe. The competition regime is found to create more ex ante incentives for firms to invest, while the monopoly regime is better at implementing ex post allocation, that is, distributing the licences given the firms' investment decisions. Additional results on the effect of punishments and bureaucrats' rotation are provided.

This paper studied the effects of competition in bureaucracy. The benefits are higher incentives for applicants to invest into eliminating negative externalities. Indeed, competition creates a positive outside option of reapplying to a different bureaucrat which is more valuable for qualified applicants than for unqualified ones. Then, applicants pay different bribes depending on whether they are qualified for the licence or not and this makes the investment to become qualified more profitable. The costs of competition are higher chances to obtain a licence for those who do not invest since they can continue reapplying until they meet a corrupt bureaucrat that will sell them the licence. Until now, the literature has focused only on the costs. And though it considered lower bribes due to competition (that we also obtain), it did not recognize the differential impact on qualified and unqualified applicants and, therefore, the positive effect on incentives. Another new and important result of the paper is that punishments for corruption are more effective under competition since the benefits of a corrupt transaction are smaller and more easily destroyed. In this paper we abstracted from some important dimensions along which the monopoly and competition regimes may differ. In particular, introducing competition may give the government more scope for benchmarking the bureaucrats. In the context of this paper, however, competition does not seem to allow the better detection of corrupt bureaucrats as the performance of bureaucrats is qualitatively the same in the two regimes. Indeed, in both regimes, dishonest bureaucrats give more licences than do honest ones, and the rejection of an applicant reveals that the bureaucrat is honest. If the government makes such conclusions, corrupt bureaucrats will reject some applicants to pool themselves with the honest ones. If some frictions are introduced in the bargaining process, for instance, asymmetric information as in Cadot (1987), corrupt bureaucrats will reject some applicants in the equilibrium. Several directions are promising for future research. People are not born bureaucrats or entrepreneurs, they choose the activity comparing the expected incomes. The number and the types of bureaucrats are then endogenous. In Drugov (2007) we analyzed such a setup and found that competitive bureaucracy results in more honest bureaucrats in the equilibrium in some cases. The analysis was very basic but the framework could then be extended to consider optimal policies with respect to the bureaucrats' salary, size of the bureaucracy, fines for unqualified applicants, etc. in a way similar to Acemoglu and Verdier (2000). Another direction is to introduce imperfect information about applicants' type as in Cadot (1987), Banerjee (1997) and others. Applicants, and more importantly, bureaucrats often do not know whether the applicants satisfy the requirements for the licence they ask for. Bureaucrats may take a costly action to find out, as in Mookherjee and Png (1995). For example, a bureaucrat may visit the firm's site to see the technology it uses, or he can give or refuse the licence without the visit saving time and effort. It is an open question as to which regime will result in more efforts made by bureaucrats. Bureaucrats can also use red tape to find out which applicants are qualified for the licence, as in Banerjee (1997), Saha (2001) and Guriev (2004). Red tape will then serve a double goal: it will create the incentives to invest and, once investment decisions are taken, it will allow screening of applicants. Finally, optimal policy in licence administration should be also looked for. Besides choosing the regime, monopoly or competition, policy makers also choose the minimum delay between applications and the other costs of applications, that is, they choose red tape. The optimal red tape is likely to be different in the two regimes.