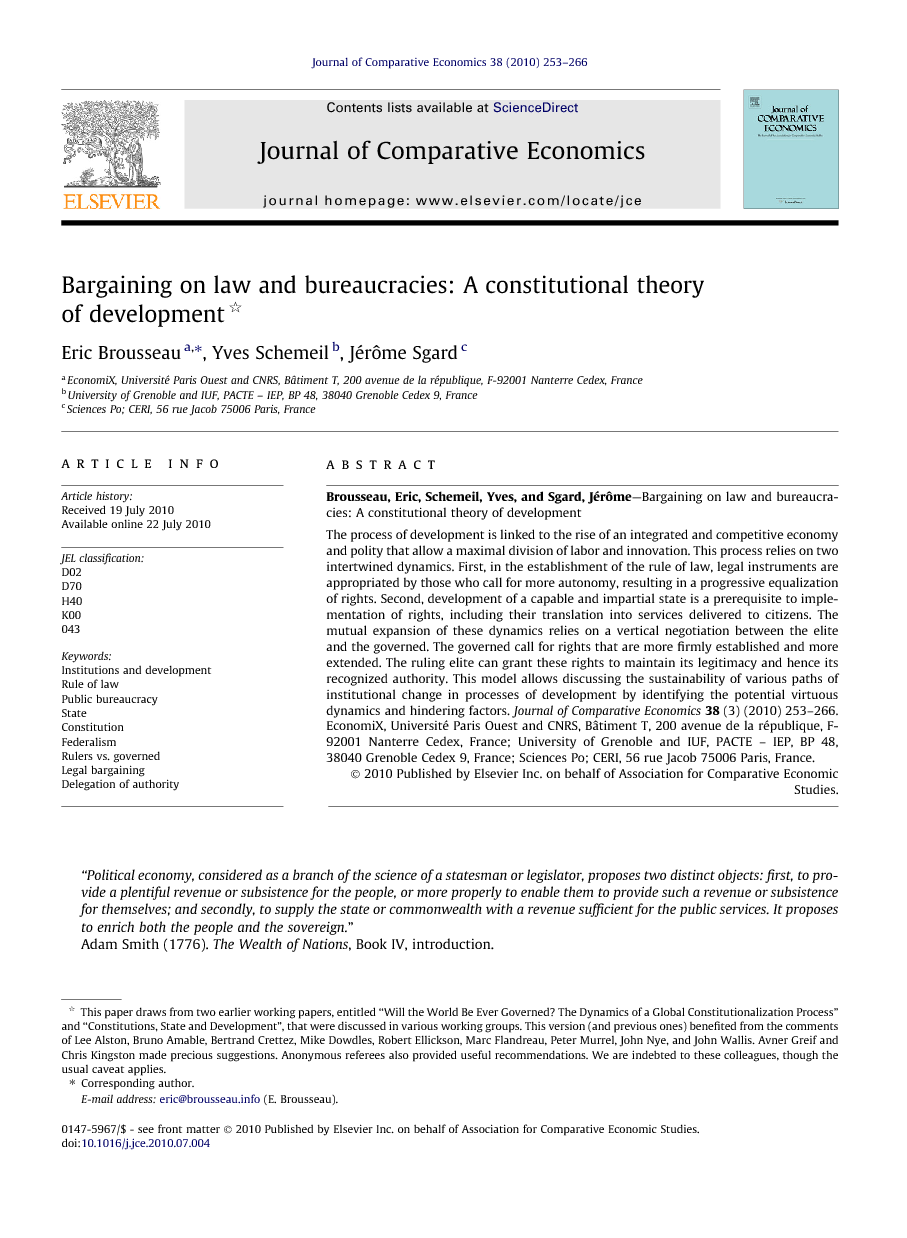 The process of development is linked to the rise of an integrated and competitive economy and polity that allow a maximal division of labor and innovation. This process relies on two intertwined dynamics. First, in the establishment of the rule of law, legal instruments are appropriated by those who call for more autonomy, resulting in a progressive equalization of rights. Second, development of a capable and impartial state is a prerequisite to implementation of rights, including their translation into services delivered to citizens. The mutual expansion of these dynamics relies on a vertical negotiation between the elite and the governed. The governed call for rights that are more firmly established and more extended. The ruling elite can grant these rights to maintain its legitimacy and hence its recognized authority. This model allows discussing the sustainability of various paths of institutional change in processes of development by identifying the potential virtuous dynamics and hindering factors.

It is usually assumed that the interaction between the economics and politics is dysfunctional in developing countries. Why does it seem such a stable situation? Since the early 1990s, both mainstream and other economists have addressed the issue with renewed calls for a more thorough approach to studying the role of states and institutions in market economies. Transition in Eastern Europe and the experience of high growth and crises in emerging economies played a key role in rekindling these debates. Still, the field is marred with serious research shortcomings, the most conspicuous of which is the difficulty of accounting for state action and for the role of the legal regime in promoting a dynamic economy. The role of the state as builder and maintainer of the economic infrastructure is widely acknowledged by most economists. At the same time, the transition from a state manipulated by a rent-seeking elite to an organization providing the framework for an efficient market economy remains a puzzle. As indicated by the debates around the notions of “legal origin” and “legal transplants”, the mechanisms by which some legal principles would favor growth and the process by which they could be implemented are open questions. This paper argues that development is conditioned by a parallel and interacting development of the rule of law, whose central features are the formalization and hierarchization of norms within a consistent framework, and public bureaucracy, which is characterized by independence and technical capability. Together they guarantee the credibility and evolutivity of the social pact as well as the implementation of an institutional framework favoring division of labor, collective action, and innovation. Pascal observed that “Justice without force is powerless; force without justice is tyrannical” (Pensée #103). Likewise, we argue that legal formalization is key to economics and political integration: legal norms are necessary to grant legitimacy and to control the coercive capability of the state; and a skilled and neutral bureaucracy is required to provide access to public goods and ensure the transforming of de jure rights granted to citizens into de facto rights that can be opposed against others. In order to analyze the process of state building and legal evolution, this paper builds on the notion of constitutionalization. Rather than viewing rights as being established once (under conditions that are often unique) or being the corollary outcome of an external dynamic, we envisage rights—both political and economic—as the product of an ongoing bargaining process. Rights are debated, fought over, supported, and possibly renegotiated by unequal (though purposeful) agents who interact with their rulers. In particular, we consider the vertical delegation of authority by individuals to political rulers. This delegation aims to provide the ruler(s) with the capability to establish both the fundamental rights of individuals and the basic rules of social exchange in a given society. The problem with rulers is that, once endowed with considerable power, they may trample on the individual and property rights of their subjects. We contrast two types of constitutional delegations. Under a liberal regime, the governed are able to establish strong guarantees. The recognition of extended and equal fundamental rights to all—combined with a balance of power in the organization of the relationship among authorities—binds the rulers to the governed. In order to maintain their leadership position, rulers must please the governed by efficiently providing them with the public goods they need. Yet in the absence of strong guarantees, rulers are likely to bargain with different groups in society to guarantee them specific (and thus unequal) rights. The result is a sustainable coalition in which various individuals and groups obtain rents. In this context, which in our framework is defined as a despotic constitution, the governed are unable to credibly balance the power of those benefiting from a constitutional delegation. In response, the governed tend to grant delegations to several rulers in charge of different dimensions of collective coordination—typically local communities, professional guilds, or warlords. This way of challenging the power of rulers allows the population to limit capture, but it leads to inefficiencies in collective coordination and in the provision of public goods. First of all, authorities are not likely to operate at the prope scale. Second, competition among rulers can hinder their capacity to provide order and may even result in (possibly violent) conflict. Starting from this, we show that there is an intrinsic dynamic of constitutionalization processes by which citizens—who may have been granted unequal fundamental rights at a particular historical moment—call for an extension and equalization of their rights, which in turn leads to the emergence of liberal orders characterized by strong equality of rights. This promotes competition, facilitates innovation, and boosts participation in collective action, thereby promoting economic and civic development. The main driver of this evolution is the “call” of the governed for adjustments to the existing constitutional arrangement so that they can reap the benefits of wealth and autonomy from their increased capacities. The essential inhibitor to such development is the desire of elites to preserve their rents and their share in a despotic regime (or natural state or oligarchic society, to cite other categories featured in this literature). However, the elite need political support and revenues from tax, for which they bargain by offering to devolve more rights to (some groups of) citizens. Section 2 returns to the literature and historical evidence on the link between institutions and development, and it also discusses our influences and this contribution. Section 3 develops our analysis of the relationship between the institutional framework and the economy, highlighting a “growth and legitimacy” loop as characteristic of liberal regimes. Section 4 focuses on the dynamics of institutional evolutions, stressing the role of legal formalization and bureaucratic capabilities, and division of labor. We conclude in Section 5 by remarking on how both the law and the state are meant to be nonnegotiable mechanisms for easing negotiation among society’s stakeholders and guaranteeing the resulting agreements.

In contrast to alternative and complementary analyses of the relationship between macro institutions and development, our framework underscores that modern societies and their states, while implementing and guaranteeing the “social” contract, cannot rightly be understood as simple equilibria of dominant strategies among coalitions. Both legal ordering and procedural organizations, once settled, become autonomous to individuals and even society. Furthermore, this autonomy depends precisely on the joint development of and interplay between the rule of law and the Weberian bureaucracy. This dynamic leads in particular to the increased formalization (guaranteeing impersonality) and hierarchization (guaranteeing equality and efficiency) of norms and organizations both. The strength of this legal–bureaucratic combination is that it is adhered to by individuals, who understand that guaranteed rights—even when unequal or imperfect—enable them to build and manage their personal interest (i.e., better so than in a context of violence and civil war). Also, rights are embodied by economic mutual commitments (contracts, balance sheets, etc.) and assets, that is the current accumulation and distribution of wealth and production capacities, which contribute to their credibility and irreversibility. From this perspective, the potential of a liberal consititutionalization is that it is intrinsically dynamic while still providing safety. It relies on a credible commitment among members of the society that allows each to pursue his own individual interest while taking into account the interest of others. This is one consequence of the principle of equality in rights. Security then favors negotiability. Established rights (which include procedures) constitute limits on what can be negotiated, and equality in rights favors a negotiation process “behind the veil of ignorance”. Here all individuals realize that the rights granted to some might actually benefit all, which facilitates agreements. In turn, negotiability fosters adhesion to the order: unsatisfied agents need not opt out, because they have the option to negotiate. The process of liberal constitutionalization therefore entails a permanent possibility of renewal. Negotiability allows experimentation and innovation. The combination of security and negotiability of rights also explains why a liberal order fosters growth. The facilitated trade and innovation stimulate division of labor and development of knowledge. All in all, our approach of formalization and hierarchization of both the legal system and the public bureaucracy distinguishes this work from the public choice approach (from which we nonetheless borrow many elements) to relations between the law, the polity, and the economy. Our approach emphasizes that the space in which interests are negotiated must be built; there is no “natural” battlefield. This space relies on an individually nonnegotiable discipline even when it is collectively negotiated. Its rules of the game allow for agreeing on respective rights but also for building the collective interest. In the end, the law and the public bureaucracy promote the existence of a collective intentionality built on the seeking of individuals for enfranchisement and security, thus leading to economic growth and innovation. However, neither a state without law nor a legal order without a state can guarantee development of the growth-and-legitimacy loop identified in this paper. In our approach, the constitution is an institutional combination comprising a set of nonnegotiable meta-rules that may evolve under the influence of myriad cumulative negotiations among agents. The process of constitutionalization is thus open-ended and may result in highly contrasting socio-politic arrangements, given alternative paths of cumulative effects. Diversity in paths and in paces of evolution is an important issue, because recognition of mutual rights and agreement on the governance of public goods provision may lead to discrepancies between and/or infringement across national communities. The challenge for this framework remains to accommodate convergence and integration of the various national experiences of constitutionalization in the context of international relations; therefore, we do not propose any ended vision of history. Although the model we have presented here is obviously abstract and generic, we consider it to be primarily geared for empirical, comparative analysis of development trajectories. This is ultimately the reason for our insistence on constitutionalized rights (i.e., effectively enforced and materialized by a skilled and neutral bureaucracy). Rights are not only different across more or less despotic or liberal societies. Because they are bargained over, and then invested in social action and entrepreneurship, they bear decisively on the long term dynamics of development, hence on the future political bargain. They are the link between the political process and the economy, though without being founded neither in some self-referential commitments, nor in transitory coalition of interests.