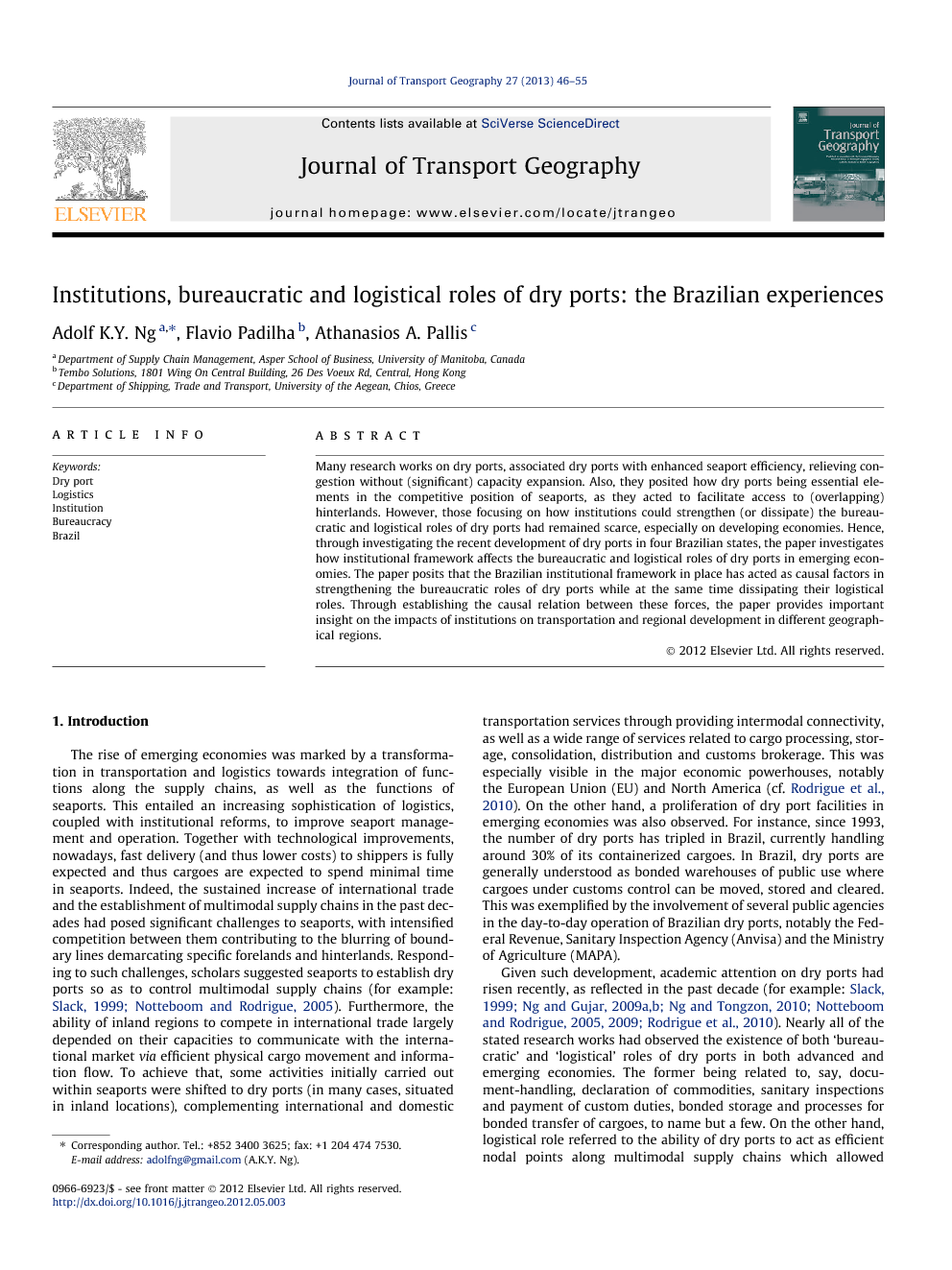 Many research works on dry ports, associated dry ports with enhanced seaport efficiency, relieving congestion without (significant) capacity expansion. Also, they posited how dry ports being essential elements in the competitive position of seaports, as they acted to facilitate access to (overlapping) hinterlands. However, those focusing on how institutions could strengthen (or dissipate) the bureaucratic and logistical roles of dry ports had remained scarce, especially on developing economies. Hence, through investigating the recent development of dry ports in four Brazilian states, the paper investigates how institutional framework affects the bureaucratic and logistical roles of dry ports in emerging economies. The paper posits that the Brazilian institutional framework in place has acted as causal factors in strengthening the bureaucratic roles of dry ports while at the same time dissipating their logistical roles. Through establishing the causal relation between these forces, the paper provides important insight on the impacts of institutions on transportation and regional development in different geographical regions.

The rise of emerging economies was marked by a transformation in transportation and logistics towards integration of functions along the supply chains, as well as the functions of seaports. This entailed an increasing sophistication of logistics, coupled with institutional reforms, to improve seaport management and operation. Together with technological improvements, nowadays, fast delivery (and thus lower costs) to shippers is fully expected and thus cargoes are expected to spend minimal time in seaports. Indeed, the sustained increase of international trade and the establishment of multimodal supply chains in the past decades had posed significant challenges to seaports, with intensified competition between them contributing to the blurring of boundary lines demarcating specific forelands and hinterlands. Responding to such challenges, scholars suggested seaports to establish dry ports so as to control multimodal supply chains (for example: Slack, 1999 and Notteboom and Rodrigue, 2005). Furthermore, the ability of inland regions to compete in international trade largely depended on their capacities to communicate with the international market via efficient physical cargo movement and information flow. To achieve that, some activities initially carried out within seaports were shifted to dry ports (in many cases, situated in inland locations), complementing international and domestic transportation services through providing intermodal connectivity, as well as a wide range of services related to cargo processing, storage, consolidation, distribution and customs brokerage. This was especially visible in the major economic powerhouses, notably the European Union (EU) and North America (cf. Rodrigue et al., 2010). On the other hand, a proliferation of dry port facilities in emerging economies was also observed. For instance, since 1993, the number of dry ports has tripled in Brazil, currently handling around 30% of its containerized cargoes. In Brazil, dry ports are generally understood as bonded warehouses of public use where cargoes under customs control can be moved, stored and cleared. This was exemplified by the involvement of several public agencies in the day-to-day operation of Brazilian dry ports, notably the Federal Revenue, Sanitary Inspection Agency (Anvisa) and the Ministry of Agriculture (MAPA). Given such development, academic attention on dry ports had risen recently, as reflected in the past decade (for example: Slack, 1999, Ng and Gujar, 2009a, Ng and Gujar, 2009b, Ng and Tongzon, 2010, Notteboom and Rodrigue, 2005, Notteboom and Rodrigue, 2009 and Rodrigue et al., 2010). Nearly all of the stated research works had observed the existence of both ‘bureaucratic’ and ‘logistical’ roles of dry ports in both advanced and emerging economies. The former being related to, say, document-handling, declaration of commodities, sanitary inspections and payment of custom duties, bonded storage and processes for bonded transfer of cargoes, to name but a few. On the other hand, logistical role referred to the ability of dry ports to act as efficient nodal points along multimodal supply chains which allowed improvement of cargo flows and reduction of transportation and logistical costs. Indeed, considerable dry port-related research works, which often focused on advanced economies, associated dry ports with enhanced seaport efficiency, relieving congestion without (significant) capacity expansion. Also, they posited how dry ports being essential elements in the competitive position of seaports, as they acted to facilitate access to (overlapping) hinterlands (cf. Slack, 1999, Notteboom and Rodrigue, 2009, Rodrigue et al., 2010 and Roso and Lumsden, 2010). However, research works focusing on how institutions could strengthen (or dissipate) the bureaucratic and logistical roles of dry ports had remained scarce, especially on developing economies. There were some exceptions, though, notably Ng and Gujar, 2009a, Ng and Gujar, 2009b, Ng and Tongzon, 2010 and Ng and Cetin, 2012 and Padilha and Ng (2012) who investigated the implications of public policies on Indian and Brazilian dry ports, respectively. Nevertheless, they mainly focused on the competitiveness and spatial characteristics of dry ports, rather than their specific roles as mentioned above. Hence, through investigating the recent dry port development in Brazil, the paper investigates how institutional framework affects the bureaucratic and logistical roles of dry ports in emerging economies. The authors propose that the institutional framework in place – either with reference to the entire nation and polity, or particular related arrangements regarding the setting of dry ports, has acted as a causal factor in strengthening the bureaucratic roles of dry ports while at the same time dissipating their logistical ones. Through establishing the causal relation between these forces, and their unique outcomes in Brazil, the paper provides us with important insight on the impacts of institutions on transportation and regional development. The rest of the paper is structured as follows. The theoretical background, study area and data collection can be found in Sections 2 and 3, respectively. Sections 4 and 5 analyze the institutional environment of Brazilian dry ports, discussing how institutional arrangements have hindered the integration between dry ports and seaports (and their terminals), thus creating limbo for dry port development. Sections 6, 7 and 8 combine the above analysis to discuss the bureaucratic and logistical roles of dry ports in Brazil. Finally, Section 9 concludes the paper with policy implications and provides suggestions for further research.

By investigating the development of dry ports in four Brazilian states, the paper reiterates the impacts of institutions on transport and regional development in developing economies. Institutions in Brazil might both encourage the use of dry ports and undermine its development. On the one hand, excessive bureaucracy and complicated import/export processes might encourage companies to use dry ports located nearby, where informal practice and face-to-face contacts may facilitate custom clearance. On the other hand, certain deficiencies of the existing institution had created an environment which hindered the integration between sea- and dry ports. Complementary to earlier studies on India (Ng and Cetin, 2012 and Ng and Gujar, 2009a), this paper posed further questions on the necessarily close relation between sea- and dry ports based on ‘port regionalization’ (Notteboom and Rodrigue, 2005, Notteboom and Rodrigue, 2009 and Rodrigue et al., 2010). As trade increased and the economy modernized, Brazilian dry ports experienced inadequate support from its institutional framework for almost two decades. This process was sustained by powerful lobbying groups with vested interests and political feuds, at high costs to business and society at large. The paper reinforced similar studies in other developing economies and peripheral regions (for example: Ng and Cetin, 2012, Monios and Wilmsmeier, 2012 and Wilmsmeier et al., 2011) where institutional frameworks and transportation struggled to keep pace with demands due to accelerated economic growth. Similar to Ng and Pallis (2010), this paper demonstrated the significance of understanding how and why institutions in country-specific contexts might interact to affect reforms and development of transport infrastructures. Where institutions were efficient and bureaucracy ceased to be an impediment to cargo flows, dry ports could become essential logistical components. Meanwhile, an eventual improvement in the efficiency of seaport services, the removal of infrastructure affecting the integration of sea- and dry ports and the solution to institutional problems was likely to undermine the viability of some dry ports while enhancing the role of others which are strategically located to capture hinterland markets and capable of providing efficient intermodal integration with seaports and airports. Thus, the long term viability of dry ports largely depends on their ability to respond to market forces and add value to supply chains. Our focus on institutional aspects had left unattended some issues concerning the roles of dry ports. Considering the environmental and economic gains provided by large, and well-posited, dry ports connected by high-capacity corridors, further research is required to understand the emergence of dry ports in areas of high demands and the impacts of these centralized structures on competition. Further investigation is also desirable to understand the network formation in the context of deficient infrastructure and planning and in the absence of high capacity corridors. It is also necessary to understand the impact of institutions and bureaucracy to dry ports in other geographical contexts. Here the authors draw particular attention to the special case of landlocked countries and peripheral regions (cf. Monios and Wilmsmeier, 2012) where port hinterland connections comprise multiple national jurisdictions and significantly greater institutional challenges. Finally, there is a need to investigate the interrelation between dry port and regional development, of which the implications of dry port development on the economic and social well-beings of surrounding regions and communities should not be overlooked (but currently significantly under-researched. See Ng (in press)). The authors genuinely believe that the paper has provided constructive insight for developing economies regarding the role of the institutional settings when pursuing similar path of transport and regional development