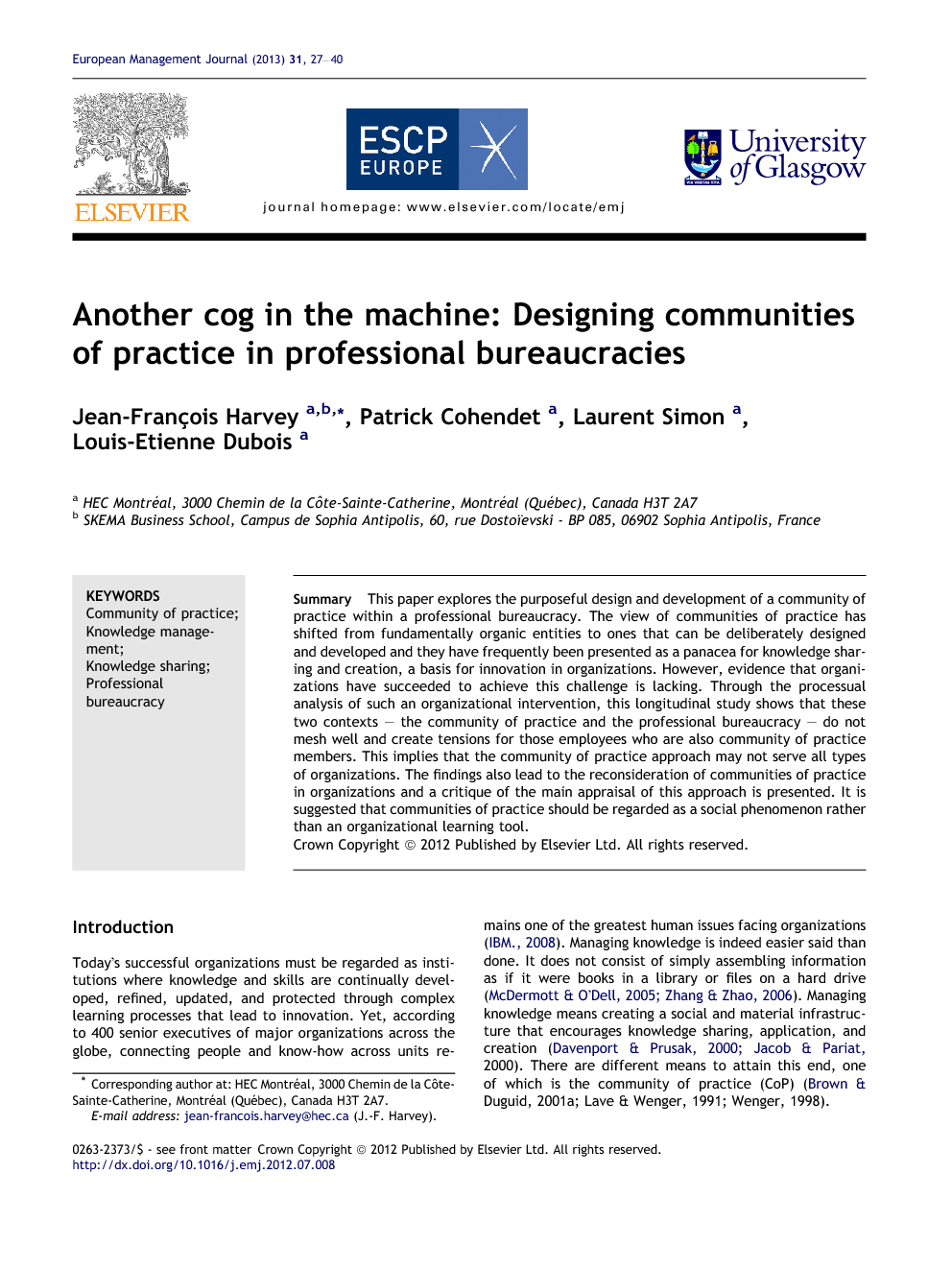 Today’s successful organizations must be regarded as institutions where knowledge and skills are continually developed, refined, updated, and protected through complex learning processes that lead to innovation. Yet, according to 400 senior executives of major organizations across the globe, connecting people and know-how across units remains one of the greatest human issues facing organizations (IBM., 2008). Managing knowledge is indeed easier said than done. It does not consist of simply assembling information as if it were books in a library or files on a hard drive (McDermott and O’Dell, 2005 and Zhang and Zhao, 2006). Managing knowledge means creating a social and material infrastructure that encourages knowledge sharing, application, and creation (Davenport and Prusak, 2000 and Jacob and Pariat, 2000). There are different means to attain this end, one of which is the community of practice (CoP) (Brown and Duguid, 2001a, Lave and Wenger, 1991 and Wenger, 1998). It is suggested that CoPs need to be developed systematically and strategically (Kimble and Bourdon, 2008, McDermott, 2000, Saint-Onge and Wallace, 2003, Wenger, 2004 and Wenger et al., 2002). Indeed, according to Wenger et al. (2002), CoPs are unlikely to achieve their full potential without organizational intervention. However, such an intervention is said to be an art and evidence that organizations have succeeded to achieve this challenge is lacking. In this study, we investigate the purposeful design and development (PDD) of a CoP within a professional bureaucracy. This study is at the crossroads of several avenues of research. First, while scholars have invited research to explore in which organizational contexts the CoPs approach is the most appropriate knowledge management tool (e.g., Roberts, 2006), the CoP theory and Mintzberg’s seminal work on organizational configurations (1980) have never been considered in relation to each other. Second, for the first time in the literature in this domain, a processual analysis of such an organizational intervention is provided. A grounded theory design is adopted, using empirical findings to understand the failure to design and develop a CoP in sustainable development within a large labour union. Third, the findings show that the two contexts – the CoP and the professional bureaucracy – do not mesh well and create tensions for employees who are also CoP members. This implies that the CoPs approach may not serve all types of organization. Organizations’ management should therefore consider the CoPs’ context before deciding to adopt this model. The findings also lead to the reconsideration of CoPs in organizations and a critique of the main appraisal of the CoPs approach is presented. It is suggested that CoPs should be regarded as a social phenomenon rather than an organizational learning tool. The paper is structured as follows. The literature review begins with a review of the origins of the CoP concept and its growth, which shows how the view of CoPs has shifted from fundamentally organic entities to ones that can be deliberately designed and developed. The literature review then introduces a number of accounts which focus more specifically on the management of CoPs, and considers how far insights drawn from these can inform and strengthen their PDD within organizations. The next section describes the case itself and outlines the research method that has been adopted. The empirical findings and their discussion are provided in the next two sections. The focus is put on the theory that emerged about the PDD process of the CoP under study. The paper ends with implications for practice and offers some conclusions about the need for future research to look at the PDD of CoPs within other organizational configurations.

According to Amin and Cohendet, “radical innovation occurs through engagement and enactment and through the alignment of elements in a new script of organizing and acting” (2004: 79). While CoPs represent one of these new scripts, they seem particularly difficult to nurture in professional bureaucracies. At the same time, just as there are dangers associated with bringing new scripts into the world of professional bureaucracies, there are equally significant dangers associated with not having them on the management radar screen. In the end, the PDD of CoPs represents a bigger challenge for professional bureaucracies. Failing to recognize the above-mentioned hurdles will most likely leave them quite short of the expected benefits of such initiatives. Nevertheless, the PDD of CoPs may create ties that will be profitable in the long run for the organization.