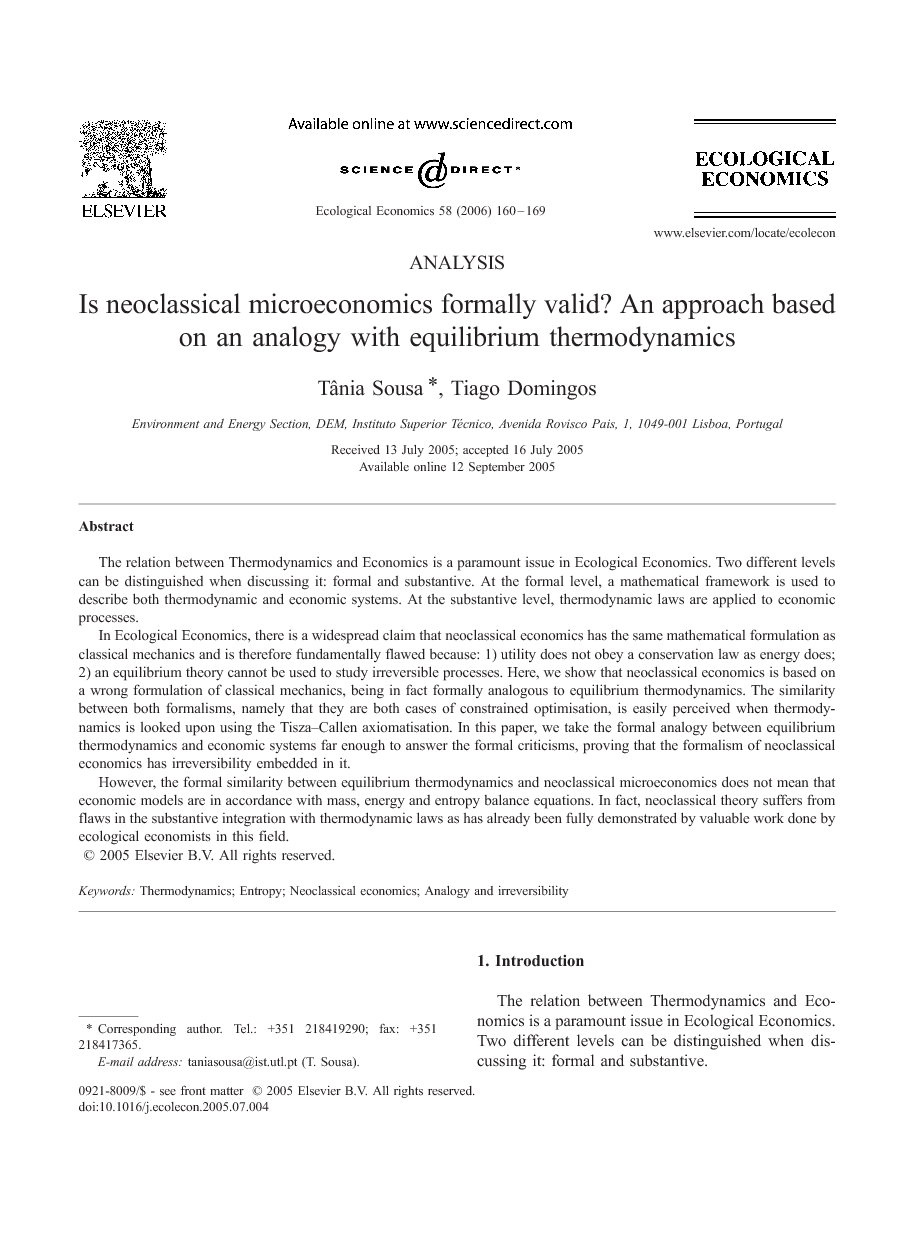 The relation between Thermodynamics and Economics is a paramount issue in Ecological Economics. Two different levels can be distinguished when discussing it: formal and substantive. At the formal level, a mathematical framework is used to describe both thermodynamic and economic systems. At the substantive level, thermodynamic laws are applied to economic processes. In Ecological Economics, there is a widespread claim that neoclassical economics has the same mathematical formulation as classical mechanics and is therefore fundamentally flawed because: 1) utility does not obey a conservation law as energy does; 2) an equilibrium theory cannot be used to study irreversible processes. Here, we show that neoclassical economics is based on a wrong formulation of classical mechanics, being in fact formally analogous to equilibrium thermodynamics. The similarity between both formalisms, namely that they are both cases of constrained optimisation, is easily perceived when thermodynamics is looked upon using the Tisza–Callen axiomatisation. In this paper, we take the formal analogy between equilibrium thermodynamics and economic systems far enough to answer the formal criticisms, proving that the formalism of neoclassical economics has irreversibility embedded in it. However, the formal similarity between equilibrium thermodynamics and neoclassical microeconomics does not mean that economic models are in accordance with mass, energy and entropy balance equations. In fact, neoclassical theory suffers from flaws in the substantive integration with thermodynamic laws as has already been fully demonstrated by valuable work done by ecological economists in this field.

In the ecological economics literature, the validity of neoclassical economics has been widely discussed. This discussion has not been as fruitful as expected because the distinction between formal and substantive criticisms is blurred in many of the arguments presented. In this paper, we present and explore the validity of the formal criticisms of neoclassical economic theory. We concluded that formal criticisms are wrong because they are either based on mixing up the substantive and formal levels (Daly, 1995 and Sollner, 1997) or they are based on the wrong assumption that the microeconomic formalism is analogous to the classical mechanics formalism (Mirowski, 1999, Lozada, 1995, Georgescu-Roegen, 1971, Amir, 1995 and Amir, 1998). We have shown that the argument that the neoclassical formalism is wrong because it was built from mechanics, is not valid; in fact, the neoclassical formalism is identical to the Tisza–Callen axiomatization of thermodynamics. For both thermodynamic and economic systems, we have identified the constrained optimisation problems along with the equilibrium conditions. We have proved that the formalism of neoclassical economics does not consider utility to be a conserved entity because it predicts the existence of irreversible processes characterized by increasing utility at constant market prices. Smith and Foley (2004) also present a formal analogy between neoclassical economics and thermodynamics based on constrained optimisation. These authors consider that the main difference between the two fields is that ‘there is no counterpart in physics for the way neoclassical economists attach importance to transformations respecting initial endowments … and there seems to be no counterpart in economics to the importance thermodynamics attaches to reversible transformations.’ The first remark is not correct because initial endowments in consumer theory (initial amounts of goods) are similar to the initial extensive parameters characterizing an isolated composite system (volume, internal energy and number of moles). The second remark is not correct because in consumer theory many results are also obtained for reversible transformations, e.g., the compensating and the equivalent variations. In both fields, reversible transformations are just limiting cases of actual transformations but their study is important because they set limits on real transformations. Finally, it is of fundamental importance that the fact that neoclassical economics is formally identical to thermodynamics does not mean that it is compatible with thermodynamic laws. Examples of flaws in the integration between economic theory and thermodynamic laws already identified are: economic theory considers a circular flow between households and firms without considering the one-way flow that begins with resources and ends with waste (Georgescu-Roegen, 1971); energy and capital are generally not substitutes, as assumed by production functions, but complements (Ruth, 1993, Daly, 1997 and Stern, 1997); the Inada conditions are inconsistent with mass conservation (Baumgärtner, 2004a); and production theory does not fully possess thermodynamic irreversibility (Baumgärtner, 2005). However these flaws do not result from the similarities between the formal structure of economics and mechanics. This misconception, which results from the use of the formal to argue the substantive, is present in many works like Daly (1995), Sollner (1997) and Georgescu-Roegen (1971). Daly (1995) argues that standard economics explains circular flows because they are mechanistic in nature (reversible and qualityless) and that it does not explain the one-way flow of resources into waste because it is irreversible and mechanistic models cannot deal with irreversibility. We have proved that formally standard economics has irreversibility embedded in it; therefore, the fact that standard economics does not explain the physical directionality of economic flows cannot be accounted for by its formal structure. Sollner (1997) considers that the definition of value in economic theory is incompatible with the entropy law because it was taken from neoclassical mechanics. However, to exemplify this formal flaw, Sollner uses substantive arguments analogous to the ones provided by Georgescu-Roegen. We argue that the flaws in the economic theory, referred by Sollner (1997), Daly (1995) and Georgescu-Roegen (1971) do exist, but the causality relation used to explain these flaws is not correct. These flaws are due to a lack of substantive integration between thermodynamics and economics instead of being rooted in the supposed ‘mechanistic’ nature of neoclassical economics. Concluding, we proved that the analogies to classical mechanics used by economists to build up neoclassical economic theory were wrongly formulated and that instead, neoclassical economic theory was built formally analogous to thermodynamics. Additionally, by clarifying the distinction between formal analogy and substantive integration we made clear that although neoclassical economics and thermodynamics are both formalisms of constrained optimisation they are not substantively compatible.