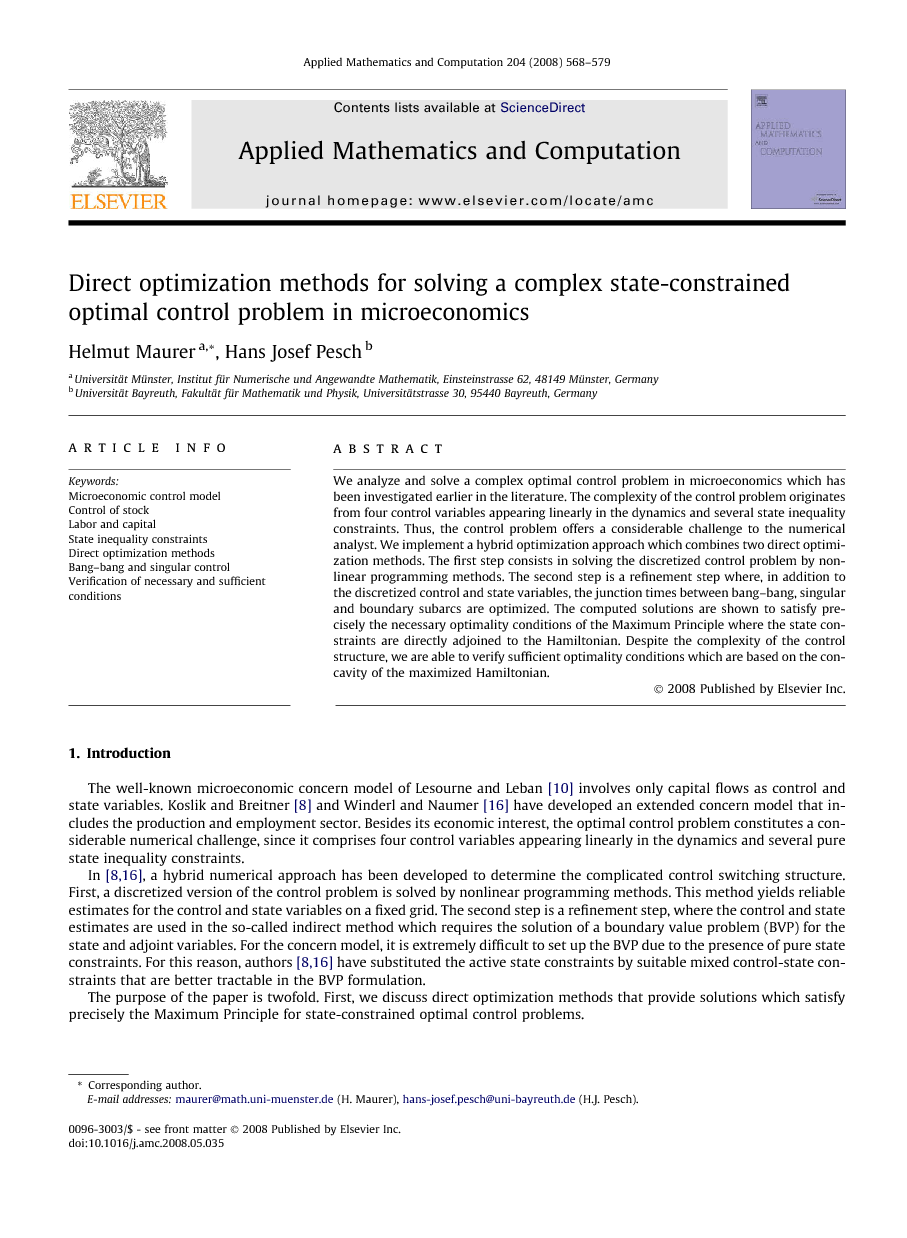 We analyze and solve a complex optimal control problem in microeconomics which has been investigated earlier in the literature. The complexity of the control problem originates from four control variables appearing linearly in the dynamics and several state inequality constraints. Thus, the control problem offers a considerable challenge to the numerical analyst. We implement a hybrid optimization approach which combines two direct optimization methods. The first step consists in solving the discretized control problem by nonlinear programming methods. The second step is a refinement step where, in addition to the discretized control and state variables, the junction times between bang–bang, singular and boundary subarcs are optimized. The computed solutions are shown to satisfy precisely the necessary optimality conditions of the Maximum Principle where the state constraints are directly adjoined to the Hamiltonian. Despite the complexity of the control structure, we are able to verify sufficient optimality conditions which are based on the concavity of the maximized Hamiltonian.

The well-known microeconomic concern model of Lesourne and Leban [10] involves only capital flows as control and state variables. Koslik and Breitner [8] and Winderl and Naumer [16] have developed an extended concern model that includes the production and employment sector. Besides its economic interest, the optimal control problem constitutes a considerable numerical challenge, since it comprises four control variables appearing linearly in the dynamics and several pure state inequality constraints. In [8] and [16], a hybrid numerical approach has been developed to determine the complicated control switching structure. First, a discretized version of the control problem is solved by nonlinear programming methods. This method yields reliable estimates for the control and state variables on a fixed grid. The second step is a refinement step, where the control and state estimates are used in the so-called indirect method which requires the solution of a boundary value problem (BVP) for the state and adjoint variables. For the concern model, it is extremely difficult to set up the BVP due to the presence of pure state constraints. For this reason, authors [8] and [16] have substituted the active state constraints by suitable mixed control-state constraints that are better tractable in the BVP formulation. The purpose of the paper is twofold. First, we discuss direct optimization methods that provide solutions which satisfy precisely the Maximum Principle for state-constrained optimal control problems. The second goal is to show that the computed solution satisfies a suitable type of sufficient optimality conditions. The organisation of the paper is as follows. The concern model is presented in Section 2. In Section 3, necessary optimality conditions are discussed which are based on a Maximum Principle, where the state constraints are directly adjoined to the Hamiltonian. In Section 4, we present a hybrid optimization approach to solve the state-constrained control problem. The first step is similar to that in [8] and [16] and differs only in that we apply the large-scale optimization methods developed by Büskens [2], Büskens and Maurer [3] and Wächter and Biegler [15]. The second step is different from the one in [8] and [16]. Instead of trying to solve the BVP of the Maximum Principle, we optimize simultaneously the switching and junction times between bang–bang, singular and boundary arcs and the discretized control variables; cf. [5], [13] and [14]. The computed control and state variables satisfy the Maximum Principle with high accuracy. Finally, in Section 5, we show that the computed solutions satisfy a suitable type of sufficient conditions.

The complicated control structure for Data-1 shows that many switchings between bang–bang arcs occur in the very beginning of the planning period, more precisely for 0⩽t⩽t6=0.6710⩽t⩽t6=0.671. The reason for such multiple switchings may be that the initial values of loan and equity capital are not chosen properly. For the largest part of the planning period, namely for t6=0.671⩽t⩽t7=8.94t6=0.671⩽t⩽t7=8.94, all controls are singular and take values in the interior of the control region. Towards the end of the planning period, the employment rate Lc(t)Lc(t) is increasing and takes its maximum value on the final arc [t7,tf][t7,tf]. The optimal solution for Data-2 is significantly different from the Data-1 solution as can be clearly seen in the behavior of the employment control Lc(t)Lc(t). This is due to the variable price function p(t)p(t) which is increasing in the periods [0,2][0,2] and [6,10][6,10], but decreasing in the period [2,6][2,6]. The employment control Lc(t)Lc(t) is bang–bang and takes its minimum negative value Lc,min=-10Lc,min=-10, i.e. adopts a maximal dismissal rate, in the period [t4,t5]=[2.85,6.20][t4,t5]=[2.85,6.20] before it switches to maximal hiring in the remaining planning period. When the price p(t)p(t) is decreasing, the loan capital control Yc(t)Yc(t) and the investment control I(t)I(t) have significantly smaller values than those for Data-1. Due to the complexity of the control model, the complicated control structure cannot be determined from a detailed discussion of the Maximum Principle alone. We have presented a hybrid numerical approach consisting of two consecutive direct optimization methods which yield control and state variables as well as junction times between bang–bang and singular arcs. Moreover, adjoint variables and multipliers associated with state constraints can be identified with Lagrange multipliers of the optimization problems. This allows us to verify necessary optimality conditions a posteriori. Using this approach, optimal solutions can be computed for various other data scenarios in the microeconomic control problem, e.g., for the risk premium rate View the MathML sourceρrlow(t) for daring investors, etc. In all cases, the computed solution satisfies sufficient optimality conditions, since the maximized Hamiltonian turns out to be a concave function of the state variable.