عنوان انگلیسی
An application of neural networks in microeconomics: Input–output mapping in a power generation subsector of the US electricity industry
دانلود فوری مقاله + سفارش ترجمه 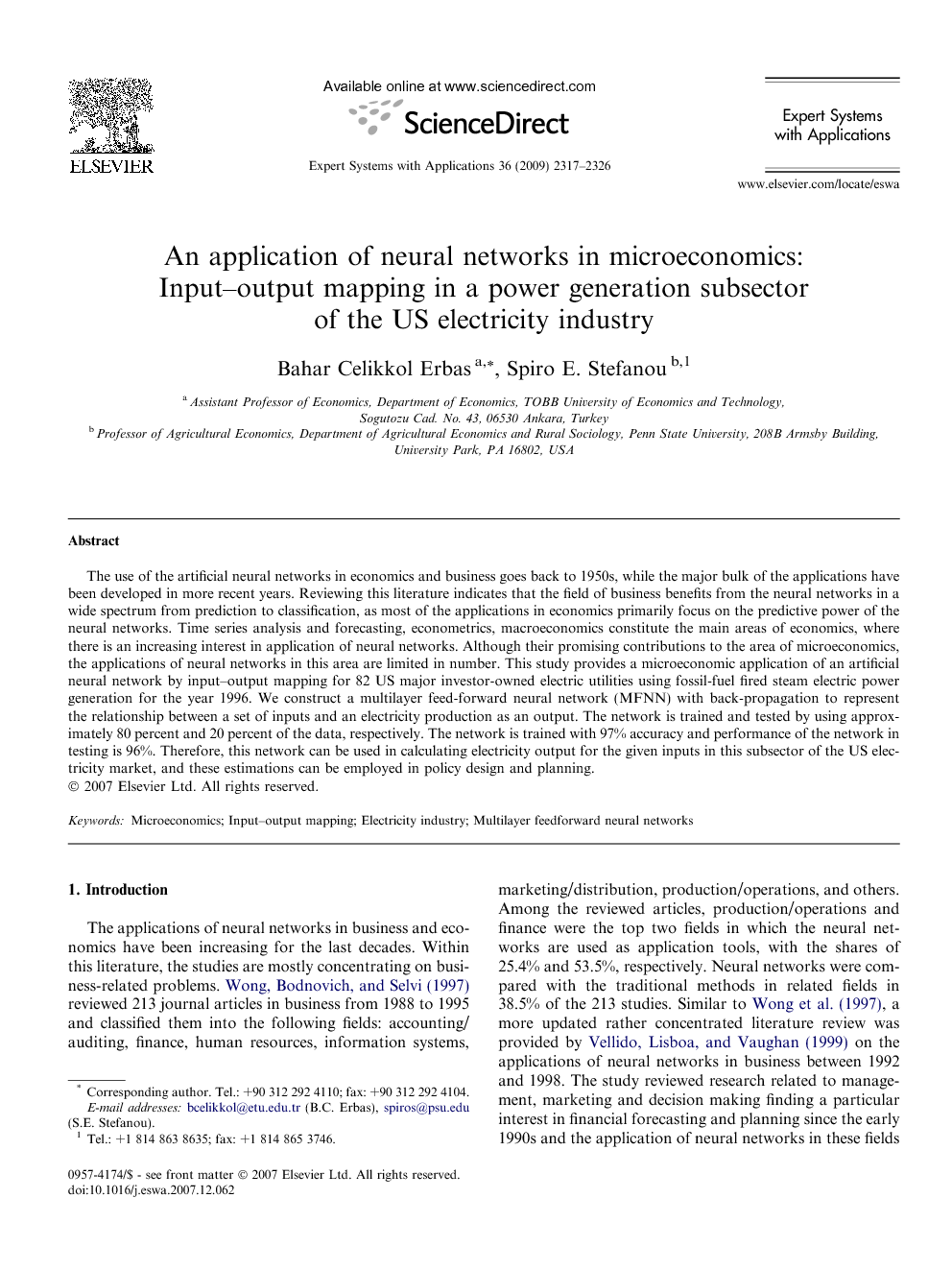 The use of the artificial neural networks in economics and business goes back to 1950s, while the major bulk of the applications have been developed in more recent years. Reviewing this literature indicates that the field of business benefits from the neural networks in a wide spectrum from prediction to classification, as most of the applications in economics primarily focus on the predictive power of the neural networks. Time series analysis and forecasting, econometrics, macroeconomics constitute the main areas of economics, where there is an increasing interest in application of neural networks. Although their promising contributions to the area of microeconomics, the applications of neural networks in this area are limited in number. This study provides a microeconomic application of an artificial neural network by input–output mapping for 82 US major investor-owned electric utilities using fossil-fuel fired steam electric power generation for the year 1996. We construct a multilayer feed-forward neural network (MFNN) with back-propagation to represent the relationship between a set of inputs and an electricity production as an output. The network is trained and tested by using approximately 80 percent and 20 percent of the data, respectively. The network is trained with 97% accuracy and performance of the network in testing is 96%. Therefore, this network can be used in calculating electricity output for the given inputs in this subsector of the US electricity market, and these estimations can be employed in policy design and planning.

The neural networks are available tools for economists to estimate, predict and forecast economic variables. If modeling economic data does not require any specification of certain functional forms or exact form of functions are not know, the neural networks are good alternatives to the existing tools. Within the field of economics, econometrics, times series analysis and forecasting, finance and macroeconomics are the areas increasingly benefiting the neural networks in social sciences. Despite the growing interest for the neural networks in these fields in economics, there is relatively small number of applications in the field of microeconomics. In microeconomic analyses where the accuracy of estimations of variables is one of the most important criteria in determining the success of decision making, such as welfare analysis, regulatory design, the neural networks can be very beneficial tools. In this paper, we performed an application of neural networks in microeconomics. Our first objective was to specify a neural network structure to do input–output mapping for the investor-owned utilities using fossil fuel-fired steam electric power generation in US electric industry. After defining the appropriate neural network structure, our second objective was to accurately estimate the electricity production for a set of utilities. We used a MFNN with backpropagation algorithm. The network we designed has three input neurons, linked to a hidden layer with nine neurons through connections, and an output neuron. We estimated the electricity production of 14 utilities in the subsector of US electricity industry. In order to measure the performance of the network, we post-processed the data and conducted the regression analyses. In other words, we run linear regressions between the network outputs and the actual outputs for training, validation and test data. The correlation coefficients between the actual outputs and their corresponding neural network estimates are 0.97, 0.99 and 0.96 for training, validation and testing. Given the regression results and the correlation coefficients, we can conclude that our MFNN estimates the production relations between inputs and outputs accurately and it has a high performance in out of sample estimation. We believe that application of this sort can enhance microeconomic analyses and modeling, especially in policy making arena. Furthermore, for relatively more theoretical applications where the specification of function forms has particular importance, the neural networks can be useful in guiding the model building and functional form specification processes. In addition to the value-added they provide through accurate estimation of the economics variables, neural networks can be excellent complementary tools for traditional analyses in microeconomics that focus on identifying the structure of economic decision making by addressing cost function estimations, frontier analyses, and efficiency decomposition and analyses. So far the progress in the literature is slow. A useful future investigation is the possibility to use neural networks in estimation of production and cost functions together with parametric and nonparametric methods used in microeconomics. This line of work could provide information on the structure of the production decision making, such as returns-to-scale, homotheticity, and technical change, as well as the performance of these traditional techniques.