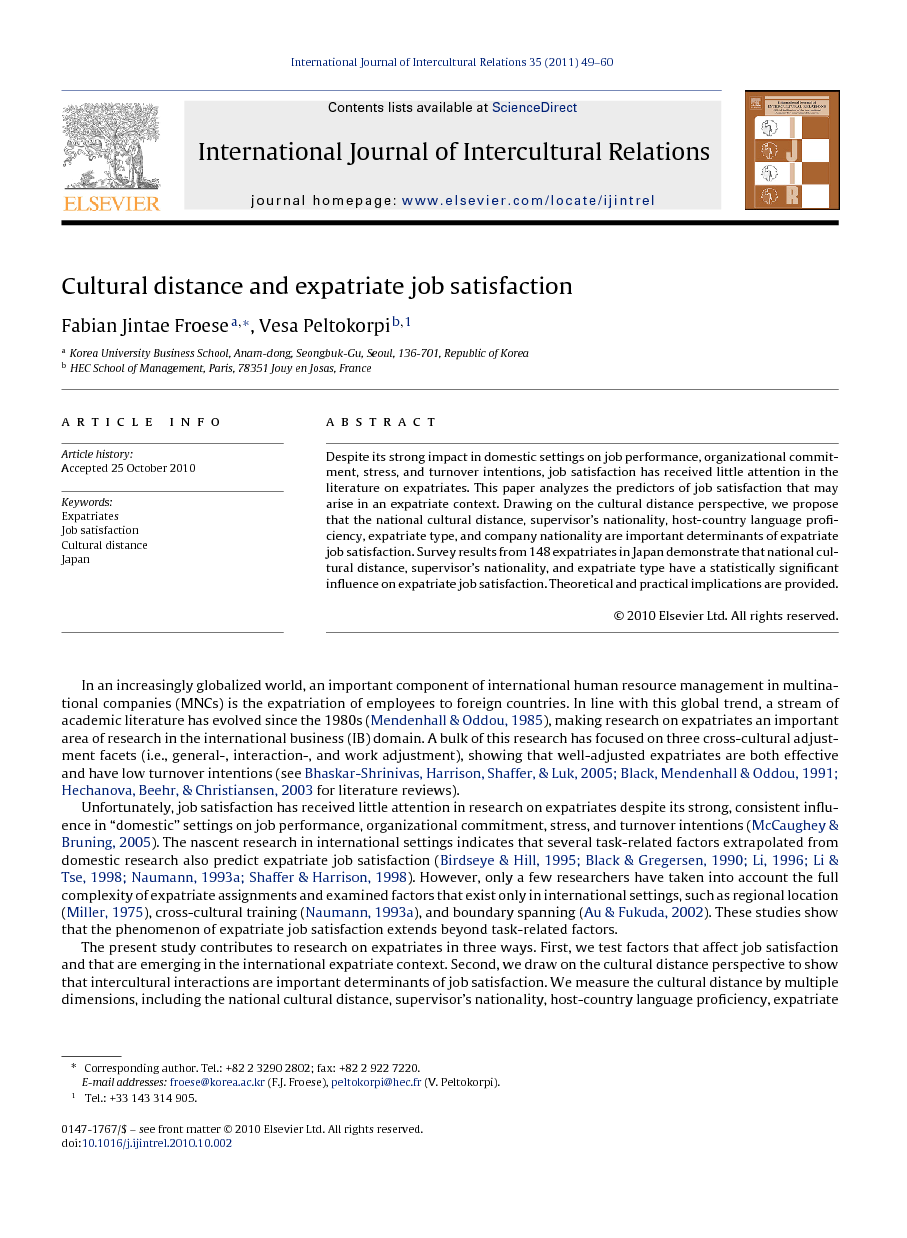 This study applied the cultural distance perspective to better understand expatriate job satisfaction. As recommended by Shenkar (2001), we extended the cultural perspective by including additional variables, which go beyond national differences in culture but which have not yet been empirically tested, to determine the cultural distance. In the context of expatriate job satisfaction, not only national culture distance but also homogeneity in terms of supervisor nationality and expatriate type (OEs) were found to reduce cultural distance and positively influence expatriate job satisfaction. As hypothesized, national culture distance had a negative impact on expatriate job satisfaction. In principle, the extent of cultural differences determines the quality and the degree of difficulty that is experienced by people who are engaged in intercultural interactions (Ward et al., 2001). These culture-based differences in work-related values and behavior are likely to increase anxiety and stress among expatriates and decrease their job satisfaction. For example, people in individualistic countries have been indoctrinated to apprehend and experience the world as distinctive, bounded, and separate individuals, whereas in Japan, people have been indoctrinated to perceive the self as a relational part of the greater harmonious whole (Hofstede, 1980). Japanese people can thus become annoyed with the self-oriented and assertive behavior that is exhibited by expatriates from countries with individualistic value orientations, while these expatriates can become annoyed with the endless formalities and tangential response patterns that are exhibited by the Japanese people. The nationality of the expatriate's supervisor was found to affect job satisfaction. That is, expatriates who worked for foreign supervisors showed higher job satisfaction than those who worked for host-country supervisors. The finding can be due to several factors. First, supervisors are sources of organizational information that expatriates need to learn for becoming effective members of the organization in the host country (Toh & Denisi, 2007). In principle, the more that expatriates interact with their supervisors, the more they receive information about what is and is not appropriate in the host country and about how they are doing. Second, supervisors are sources of social support for coping with stressful situations at both work and home (Black et al., 1991). The results of this study imply that either these interactions with local supervisors have not been frequent or their content has not been appreciated and/or apprehended by expatriates. A possible reason for the negative impact of local supervisors on expatriate job satisfaction is cultural ignorance and/or limited cultural understanding. In culturally diverse superior–subordinate dyads, assumptions and expectations may remain implicit and culturally bounded because the contextualized aspects of one's own culture are often taken for granted and hidden (Caliguiri and Day, 2000 and Toh and Denisi, 2007). Expatriate type influenced job satisfaction in that OEs were found to be more satisfied with their jobs than SIEs. In the present study, OEs might be less affected by cultural distance because of different employment and social interaction patterns. First, OEs who receive financial support can avoid the hardships that are created by cultural distance (Florkowski & Fogel, 1999). Second, OEs might be less dependent on social integration into local units and can refer to support from headquarters if necessary. It can be speculated further that such expatriate types do not only influence job satisfaction but also a number of other outcomes, such as cross-cultural adjustment and work outcomes. The non-significant impact of company nationality and proficiency in the host-country language on job satisfaction can be attributed to the nature of expatriate task-roles in Japan. Expatriates are often hired into specialist positions, where a high degree of proficiency in the host-country language is less important. Even though the general level of English in Japan is low, the results further indicate that at least in business communication, the level of English of the Japanese might be sufficient. The positive influence of cultural empathy on job satisfaction also suggests that social skills can be a more important determinant than language proficiency in a work context. Interestingly, the results seem to indicate an attrition effect. Older expatriates showed greater job satisfaction. Perhaps, younger expatriates might be more ambitious and become frustrated if they cannot achieve their goals.