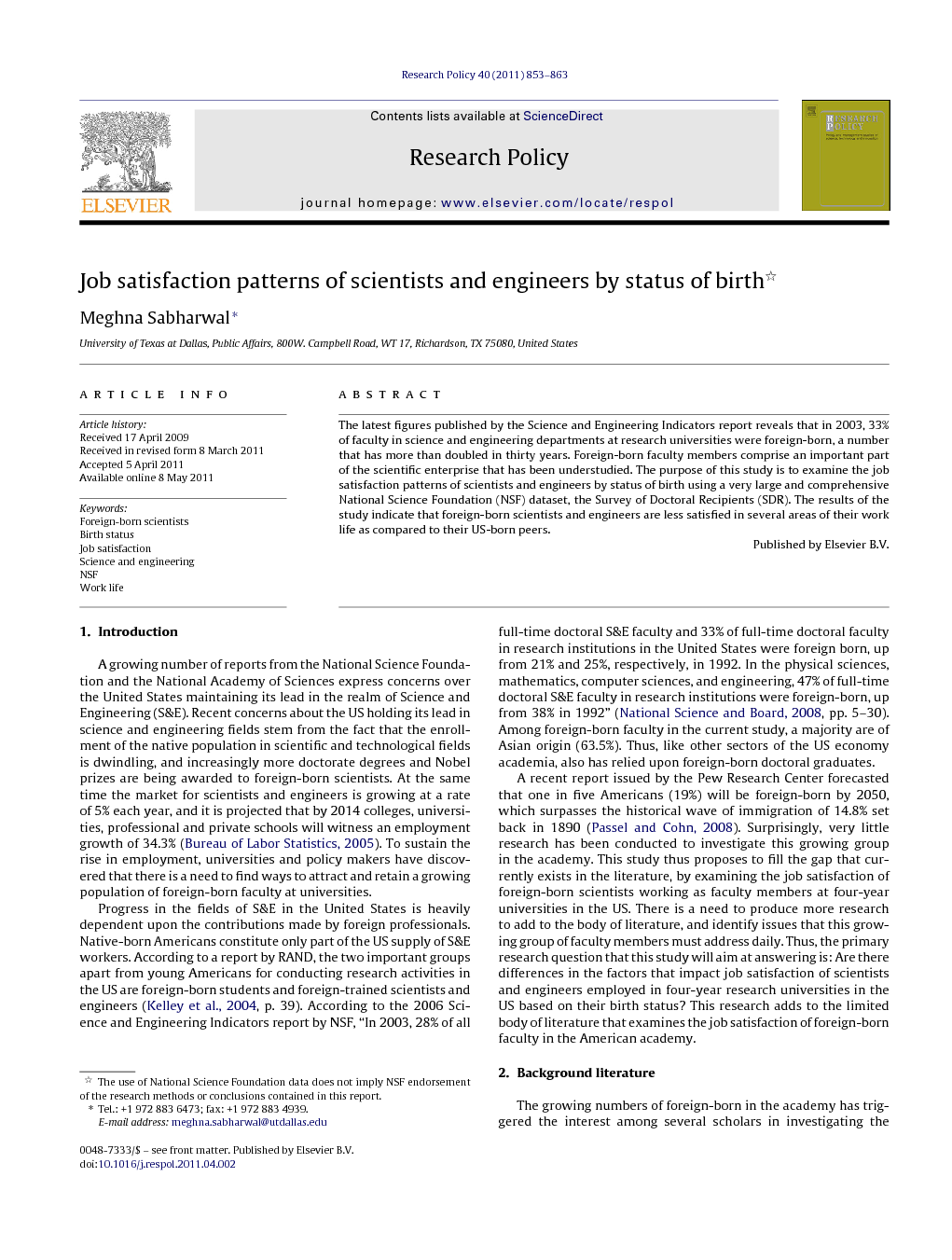 The latest figures published by the Science and Engineering Indicators report reveals that in 2003, 33% of faculty in science and engineering departments at research universities were foreign-born, a number that has more than doubled in thirty years. Foreign-born faculty members comprise an important part of the scientific enterprise that has been understudied. The purpose of this study is to examine the job satisfaction patterns of scientists and engineers by status of birth using a very large and comprehensive National Science Foundation (NSF) dataset, the Survey of Doctoral Recipients (SDR). The results of the study indicate that foreign-born scientists and engineers are less satisfied in several areas of their work life as compared to their US-born peers.

A growing number of reports from the National Science Foundation and the National Academy of Sciences express concerns over the United States maintaining its lead in the realm of Science and Engineering (S&E). Recent concerns about the US holding its lead in science and engineering fields stem from the fact that the enrollment of the native population in scientific and technological fields is dwindling, and increasingly more doctorate degrees and Nobel prizes are being awarded to foreign-born scientists. At the same time the market for scientists and engineers is growing at a rate of 5% each year, and it is projected that by 2014 colleges, universities, professional and private schools will witness an employment growth of 34.3% (Bureau of Labor Statistics, 2005). To sustain the rise in employment, universities and policy makers have discovered that there is a need to find ways to attract and retain a growing population of foreign-born faculty at universities. Progress in the fields of S&E in the United States is heavily dependent upon the contributions made by foreign professionals. Native-born Americans constitute only part of the US supply of S&E workers. According to a report by RAND, the two important groups apart from young Americans for conducting research activities in the US are foreign-born students and foreign-trained scientists and engineers (Kelley et al., 2004, p. 39). According to the 2006 Science and Engineering Indicators report by NSF, “In 2003, 28% of all full-time doctoral S&E faculty and 33% of full-time doctoral faculty in research institutions in the United States were foreign born, up from 21% and 25%, respectively, in 1992. In the physical sciences, mathematics, computer sciences, and engineering, 47% of full-time doctoral S&E faculty in research institutions were foreign-born, up from 38% in 1992” (National Science and Board, 2008, pp. 5–30). Among foreign-born faculty in the current study, a majority are of Asian origin (63.5%). Thus, like other sectors of the US economy academia, also has relied upon foreign-born doctoral graduates. A recent report issued by the Pew Research Center forecasted that one in five Americans (19%) will be foreign-born by 2050, which surpasses the historical wave of immigration of 14.8% set back in 1890 (Passel and Cohn, 2008). Surprisingly, very little research has been conducted to investigate this growing group in the academy. This study thus proposes to fill the gap that currently exists in the literature, by examining the job satisfaction of foreign-born scientists working as faculty members at four-year universities in the US. There is a need to produce more research to add to the body of literature, and identify issues that this growing group of faculty members must address daily. Thus, the primary research question that this study will aim at answering is: Are there differences in the factors that impact job satisfaction of scientists and engineers employed in four-year research universities in the US based on their birth status? This research adds to the limited body of literature that examines the job satisfaction of foreign-born faculty in the American academy.

As demonstrated through this study, understanding the behavior, attitudes, and satisfaction levels of foreign-born faculty members is important if one needs to retain them and not lose them to other nations or industry. There is a need to determine the satisfaction rates among foreign-born faculty, but caution should be used while interpreting these results because, not all faculty leave due to lower satisfaction, and similarly not all faculty stay because of higher job satisfaction (Ambrose et al., 2005). Increased retention among foreign-born faculty should not be misconstrued with higher satisfaction rates. These faculty members might continue to work at their current work place despite low job satisfaction due to several reasons like geographic location, visa status, children and family obligations, or spouse's career. Future studies could examine this concept in greater depth by conducting in-depth interviews of faculty to determine their satisfaction with their jobs. A recent report issued by the Pew Research Center forecasted that one in five Americans (19%) will be foreign-born by 2050, which surpasses the historical wave of immigration of 14.8% set back in 1890 (Passel and Cohn, 2008). Thus, it is important to understand the implications of living in a global community, and academia is no stranger to this recent spurt of foreign-born faculty and students. Past studies have focused greatly on studying the productivity and satisfaction levels of minority and women faculty in science and engineering. However, what is missing is that none of these studies have examined these two dimensions exclusively for foreign-born faculty. Understanding the factors that contribute to the satisfaction or lack of among this group of scientists will lead to an environment that will foster diversity, collegiality, and collaboration in an era of globalization, and is one of the challenges we have to tackle in the future.