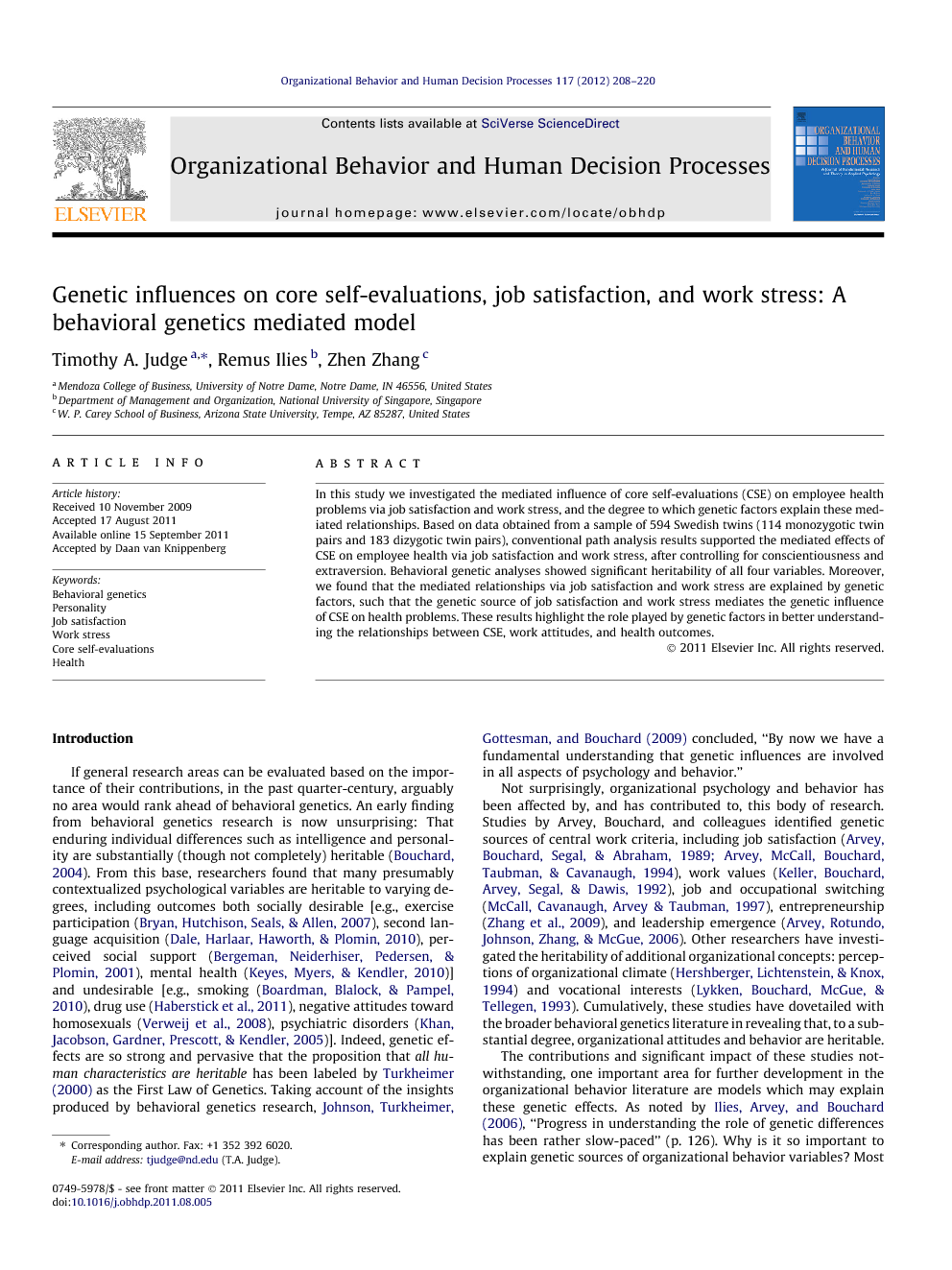 If general research areas can be evaluated based on the importance of their contributions, in the past quarter-century, arguably no area would rank ahead of behavioral genetics. An early finding from behavioral genetics research is now unsurprising: That enduring individual differences such as intelligence and personality are substantially (though not completely) heritable (Bouchard, 2004). From this base, researchers found that many presumably contextualized psychological variables are heritable to varying degrees, including outcomes both socially desirable [e.g., exercise participation (Bryan, Hutchison, Seals, & Allen, 2007), second language acquisition (Dale, Harlaar, Haworth, & Plomin, 2010), perceived social support (Bergeman, Neiderhiser, Pedersen, & Plomin, 2001), mental health (Keyes, Myers, & Kendler, 2010)] and undesirable [e.g., smoking (Boardman, Blalock, & Pampel, 2010), drug use (Haberstick et al., 2011), negative attitudes toward homosexuals (Verweij et al., 2008), psychiatric disorders (Khan, Jacobson, Gardner, Prescott, & Kendler, 2005)]. Indeed, genetic effects are so strong and pervasive that the proposition that all human characteristics are heritable has been labeled by Turkheimer (2000) as the First Law of Genetics. Taking account of the insights produced by behavioral genetics research, Johnson, Turkheimer, Gottesman, and Bouchard (2009) concluded, “By now we have a fundamental understanding that genetic influences are involved in all aspects of psychology and behavior.” Not surprisingly, organizational psychology and behavior has been affected by, and has contributed to, this body of research. Studies by Arvey, Bouchard, and colleagues identified genetic sources of central work criteria, including job satisfaction (Arvey et al., 1989 and Arvey et al., 1994), work values (Keller, Bouchard, Arvey, Segal, & Dawis, 1992), job and occupational switching (McCall, Cavanaugh, Arvey & Taubman, 1997), entrepreneurship (Zhang et al., 2009), and leadership emergence (Arvey, Rotundo, Johnson, Zhang, & McGue, 2006). Other researchers have investigated the heritability of additional organizational concepts: perceptions of organizational climate (Hershberger, Lichtenstein, & Knox, 1994) and vocational interests (Lykken, Bouchard, McGue, & Tellegen, 1993). Cumulatively, these studies have dovetailed with the broader behavioral genetics literature in revealing that, to a substantial degree, organizational attitudes and behavior are heritable. The contributions and significant impact of these studies notwithstanding, one important area for further development in the organizational behavior literature are models which may explain these genetic effects. As noted by Ilies, Arvey, and Bouchard (2006), “Progress in understanding the role of genetic differences has been rather slow-paced” (p. 126). Why is it so important to explain genetic sources of organizational behavior variables? Most fundamentally, such inquiry advances understanding of the real (vs. apparent) associations among organizational concepts. When a model among concepts is properly articulated and tested, it has the ability to test the degree to which apparently situational mediational relationships at the phenotypic level in fact result from underlying genetic and shared environmental influences. Specifically, if we observe an association between a personality trait, a work attitude, and an outcome or criterion variable, it is possible that the interpretations we make about the nature and meaning of such a meditational relationship can only be properly understood once we consider the degree to which these relationships are due to genetic effects, environment effects, or both. If genetic effects predominantly explain the associations, it suggests a different causal association than typically assumed. In such a case, it is not that a work attitude or perception causes an outcome in the way most organizational behavior researchers assume, but, rather, that genetic differences lead individuals to hold the attitude and experience the outcome. As noted by O’Connor, Caspi, DeFries, and Plomin (2000), connections between individual differences in adjustment and many outcomes that were previously thought to be explained entirely by environmental differences are now thought to be substantially explained by genetic differences. Under these circumstances, as noted by Neiss, Rowe, and Rodgers (2002), “The apparent phenotypic mediation is spurious on other sources of individual differences” (p. 273). The only such mediational efforts in organizational behavior research have been studies conducted by Ilies and colleagues. Relying on meta-analytic data, Ilies and Judge (2003) found that positive and negative affectivity better explained genetic sources of job satisfaction than the Big Five traits. Using a similar approach, Ilies, Gerhardt, and Le (2004) found that general mental ability and the Big Five traits explained some of the heritability of leadership emergence. While these studies contributed to our understanding of the degree to which genes underlie associations between personality and work outcomes, as the authors note, these studies were limited by the data on which they are based and in the assumptions they make. Ilies et al. (2006) note, “The limitations of the Ilies and Judge (2003) method can be avoided by using primary twin or familial data to investigate mediated genetic effects” (p. 133). They also note, “Specific operational models explaining the mechanisms through which genetics influence certain organizational outcomes can and should be developed and tested” (Ilies et al., 2006, p. 135). Accordingly, the purpose of the present study is to develop and test a model linking a personality trait (core self-evaluations) to an important outcome (employee health problems) as mediated by two work variables—job satisfaction and work stress. While we test an overall model of the relationships among these variables, the heart of the intended contribution of this study is to shed light on the degree to which the relationships among the variables in the model are genetic in nature. Uncovering genetic bases for mediated relationships among perceptions of the work environment and outcomes provides support for the “nature of nurture” perspective (Butcher and Plomin, 2008 and Plomin and Asbury, 2005), and suggests different theoretical and practical implications than those typically assumed. In the next section of the paper, we introduce the model, and then develop hypotheses for the core linkages within the model.

Results from the present study showed that core self-evaluations explained substantial proportions of the genetic source of job satisfaction and work stress which, in turn, explained the genetic source of health problems. Future research should build on these results by exploring environmental sources of core self-evaluations, job satisfaction, work stress and health, and possible genotype × environment interactions. Though a complete picture of the genomic structure of core self-evaluations is a long way off, these results nonetheless suggest that individuals are born with core evaluations that make them far from the “blank slate” that has been the assumption of some self-concept research, where self-concept is “seen as being acquired through interaction with other people rather than being inborn” (Robson, 1988, p. 7). As Pinker (2002) notes, “Everyone has a theory of human nature” (p. 1). It is our hope that these results inform our theories of the nature of self-concept generally, and core self-evaluations specifically.