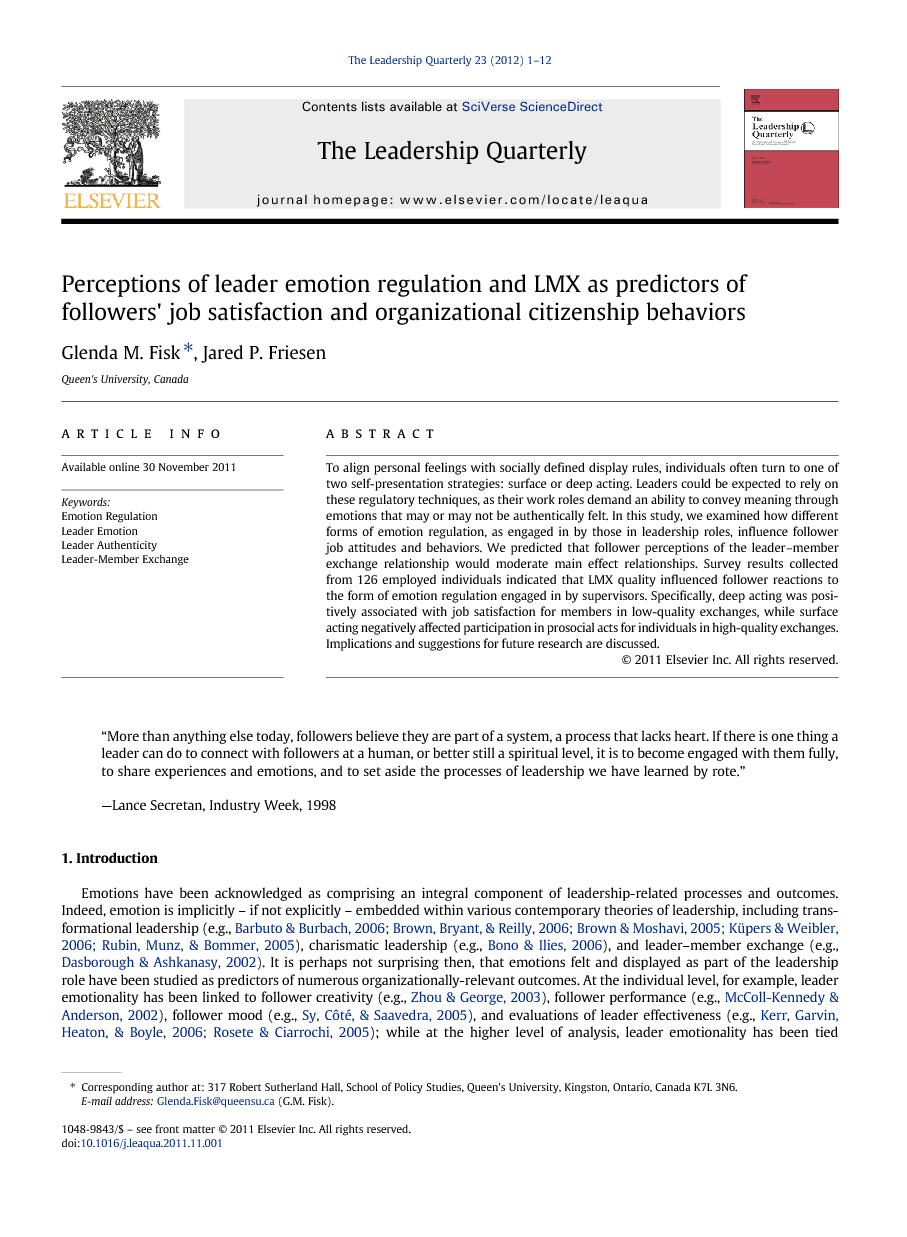 To align personal feelings with socially defined display rules, individuals often turn to one of two self-presentation strategies: surface or deep acting. Leaders could be expected to rely on these regulatory techniques, as their work roles demand an ability to convey meaning through emotions that may or may not be authentically felt. In this study, we examined how different forms of emotion regulation, as engaged in by those in leadership roles, influence follower job attitudes and behaviors. We predicted that follower perceptions of the leader–member exchange relationship would moderate main effect relationships. Survey results collected from 126 employed individuals indicated that LMX quality influenced follower reactions to the form of emotion regulation engaged in by supervisors. Specifically, deep acting was positively associated with job satisfaction for members in low-quality exchanges, while surface acting negatively affected participation in prosocial acts for individuals in high-quality exchanges. Implications and suggestions for future research are discussed

Emotions have been acknowledged as comprising an integral component of leadership-related processes and outcomes. Indeed, emotion is implicitly – if not explicitly – embedded within various contemporary theories of leadership, including transformational leadership (e.g., Barbuto and Burbach, 2006, Brown et al., 2006, Brown and Moshavi, 2005, Küpers and Weibler, 2006 and Rubin et al., 2005), charismatic leadership (e.g., Bono & Ilies, 2006), and leader–member exchange (e.g., Dasborough & Ashkanasy, 2002). It is perhaps not surprising then, that emotions felt and displayed as part of the leadership role have been studied as predictors of numerous organizationally-relevant outcomes. At the individual level, for example, leader emotionality has been linked to follower creativity (e.g., Zhou & George, 2003), follower performance (e.g., McColl-Kennedy & Anderson, 2002), follower mood (e.g., Sy, Côté, & Saavedra, 2005), and evaluations of leader effectiveness (e.g., Kerr et al., 2006 and Rosete and Ciarrochi, 2005); while at the higher level of analysis, leader emotionality has been tied to team performance (e.g., Van Kleef et al., 2009), emotional climate (e.g., Özçelik et al., 2008), and organizational change (e.g., Groves, 2006). Despite the inextricability of emotion and leadership, little research has examined how leader emotion regulation influences employee work attitudes and behaviors. Instead, extant empirical and popular press literature has focused almost exclusively on leader Emotional Intelligence (EI; George, 2000, Goleman et al., 2002, Mandell and Pherwani, 2003 and Wong and Law, 2002) or displays of discrete emotions and their blends (e.g., Bono and Ilies, 2006, Lewis, 2000 and McColl-Kennedy and Anderson, 2002). This is a notable omission as emotions, and therefore the way in which they are managed and conveyed, speak to the nature of the leader–follower relationship (Lawler & Thye, 1999). Evidence exists to suggest that leaders and followers mutually construct their relationship and come to expect certain behaviors – including emotional displays – in light of that relationship (Martinko & Gardner, 1987). Consistent with the tenets of social exchange theory, if expectations for the emotional content of a relationship are not met, individuals could be expected to become dissatisfied and be less likely to ‘give back’ (Liden, Sparrowe, & Wayne, 1997). The current study builds upon and extends previous work by examining how perceptions of leaders' emotion regulation strategies, along with reports of leader–member exchange (LMX) quality, impact followers' attitudes toward their work role and their willingness to engage in extra-role, discretionary acts. In the following pages, we review research pertaining to the role emotion plays in effective leadership. Specific focus is given to defining different forms of emotion regulation, as well as to reviewing LMX theory. Building on work relevant to authenticity in interpersonal relationships, we conclude by suggesting these variables will interact to predict followers' job satisfaction and organizational citizenship.

The results of this study suggest followers react uniquely to different forms of leader emotion regulation, with such reactions depending – at least in part – on the nature of the leader–follower relationship. Whereas perceptions of leader deep acting appear to mitigate some of the negative effects associated with low-quality exchange relationships, perceived surface acting has potentially undesirable repercussions for those in high-quality relationships. Although it may be more advisable for organizational leaders to surface act than reveal authentic negative emotions to their followers (an empirical question for future research), the results of this study suggest that leaders who fake emotions risk undermining the foundations high-quality leader–follower relationships are built on. Thus, to reap the benefits of high-quality exchange relationships and mitigate the negative effects of low-quality exchange relationships, leaders must understand how their emotions affect followers and adjust their regulatory strategies accordingly.