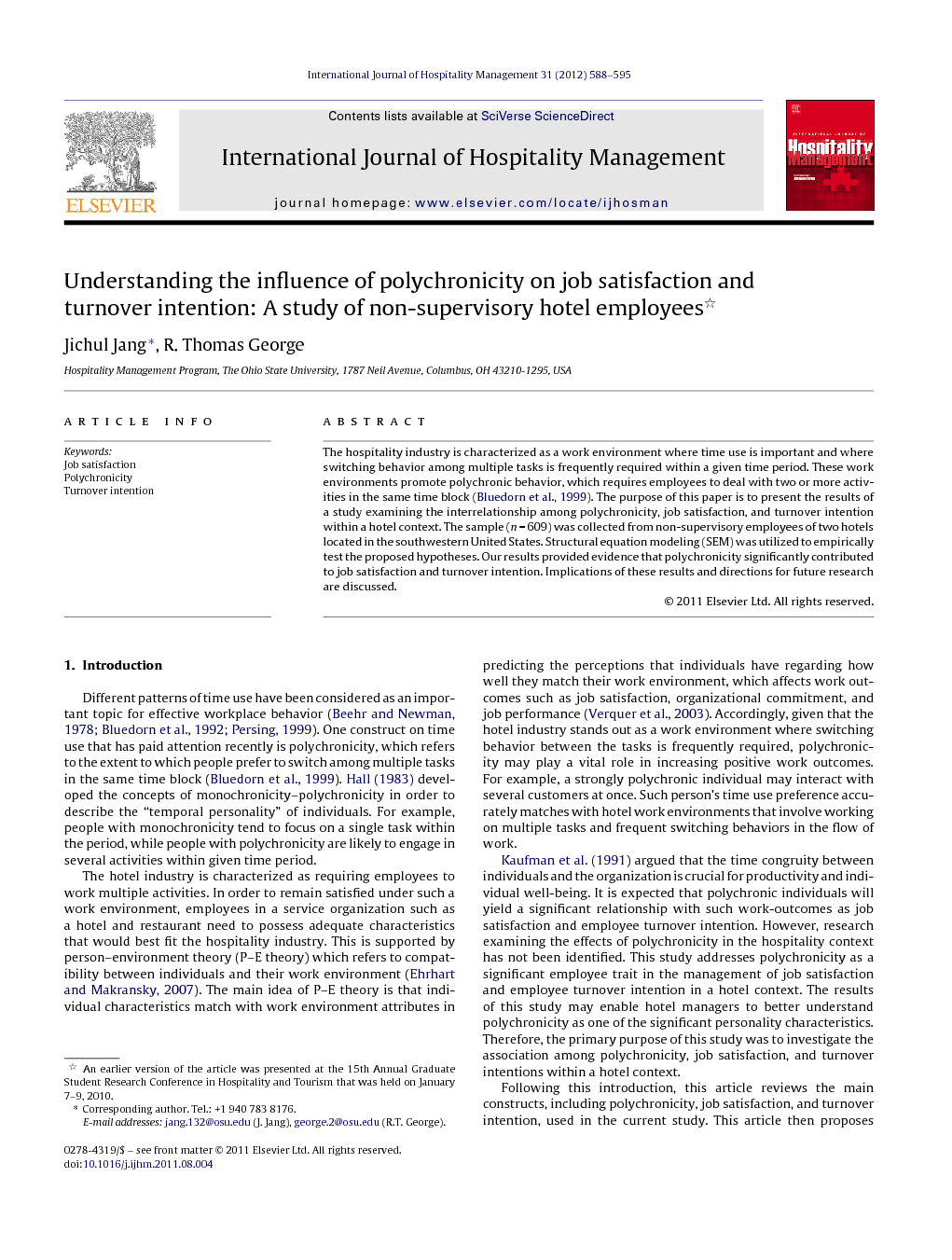 The hospitality industry is characterized as a work environment where time use is important and where switching behavior among multiple tasks is frequently required within a given time period. These work environments promote polychronic behavior, which requires employees to deal with two or more activities in the same time block (Bluedorn et al., 1999). The purpose of this paper is to present the results of a study examining the interrelationship among polychronicity, job satisfaction, and turnover intention within a hotel context. The sample (n = 609) was collected from non-supervisory employees of two hotels located in the southwestern United States. Structural equation modeling (SEM) was utilized to empirically test the proposed hypotheses. Our results provided evidence that polychronicity significantly contributed to job satisfaction and turnover intention. Implications of these results and directions for future research are discussed.

Different patterns of time use have been considered as an important topic for effective workplace behavior (Beehr and Newman, 1978, Bluedorn et al., 1992 and Persing, 1999). One construct on time use that has paid attention recently is polychronicity, which refers to the extent to which people prefer to switch among multiple tasks in the same time block (Bluedorn et al., 1999). Hall (1983) developed the concepts of monochronicity–polychronicity in order to describe the “temporal personality” of individuals. For example, people with monochronicity tend to focus on a single task within the period, while people with polychronicity are likely to engage in several activities within given time period. The hotel industry is characterized as requiring employees to work multiple activities. In order to remain satisfied under such a work environment, employees in a service organization such as a hotel and restaurant need to possess adequate characteristics that would best fit the hospitality industry. This is supported by person–environment theory (P–E theory) which refers to compatibility between individuals and their work environment (Ehrhart and Makransky, 2007). The main idea of P–E theory is that individual characteristics match with work environment attributes in predicting the perceptions that individuals have regarding how well they match their work environment, which affects work outcomes such as job satisfaction, organizational commitment, and job performance (Verquer et al., 2003). Accordingly, given that the hotel industry stands out as a work environment where switching behavior between the tasks is frequently required, polychronicity may play a vital role in increasing positive work outcomes. For example, a strongly polychronic individual may interact with several customers at once. Such person's time use preference accurately matches with hotel work environments that involve working on multiple tasks and frequent switching behaviors in the flow of work. Kaufman et al. (1991) argued that the time congruity between individuals and the organization is crucial for productivity and individual well-being. It is expected that polychronic individuals will yield a significant relationship with such work-outcomes as job satisfaction and employee turnover intention. However, research examining the effects of polychronicity in the hospitality context has not been identified. This study addresses polychronicity as a significant employee trait in the management of job satisfaction and employee turnover intention in a hotel context. The results of this study may enable hotel managers to better understand polychronicity as one of the significant personality characteristics. Therefore, the primary purpose of this study was to investigate the association among polychronicity, job satisfaction, and turnover intentions within a hotel context. Following this introduction, this article reviews the main constructs, including polychronicity, job satisfaction, and turnover intention, used in the current study. This article then proposes hypothesized relationship among them. The findings of the study and implications for practice are then suggested. The article concludes with limitations and directions for future research.

We examined association among polychronicity, job satisfaction, and turnover intention with a sample of non-supervisory hotel employees. First, one key finding was that polychronicity was significantly associated to job satisfaction. Our findings are consistent with a prior study conducted by Arndt et al. (2006) finding that polychronicity was positively associated with job satisfaction among front-line retail employees. These results indicate that polychronic employees would lead to increase job satisfaction. This result can also be explained by an important aspect of person–job fit theory which refers to the level of compatibility that an individual has with his/her job (Edwards, 1991 and Kristof, 1996). That is, people with polychromic time use are more likely to be comfortable with their job that is frequently required to work on multiple tasks at once. On the other hand, people with monochromic time use tend to match with their job that provides few opportunities for working several activities simultaneously. Therefore, since the hotel work environment where effective time use is extremely crucial and task-switching behaviors is frequently used within a given time period, we argue that employees who have high level of polychronicity were more satisfied with the job. Second, we also found that polychronicity was negatively related to turnover intention. This finding supported the notion that employees who have higher levels of polychromic-orientation would decrease turnover intentions. Part of the reason may be due to the fact that it is very stressful for monochronic people to work in a polychronic environment. Furthermore, Schein (1992) argued that it may be a source of conflict for monochronic and polychronic people to work together because of their different preference to time management. For example, monochronic people view polychronic-orientated behavior as confusing, stressful, and lacking of focus. On the contrary, polychronic people regard such behavior as efficient, realistic, and desirable (Cotte and Ratneshwar, 1999). Thoughts of leaving a job may become especially stronger when individuals have monochronic tendency in a polychronic environment. Consequently, we argued that under a hotel environment that is characterized by a polychronic environment that requires doing more than one thing within given time frame, individuals who are high in polychronicity might show their intention to stay in their organization. Finally, the present study found there was a statistically significant difference in the mean score of polychronicity with regard to some demographic factors including job type and job tenure. When examined by job type, full time employees seem to have higher mean score of polychronicity than part-time employees. This finding may be explained in terms of the fact that part-time employees may have different work value from full-time employees, since hotel companies require intense workforce for a short period of time. Hotel managers need to create a suitable work environment for part-time employees by understanding how they feel about their work environment. It can be attained by spending much time discussing their career interest, and career development. Such effects make it possible for part-time employees to engage in polychromic behavior in their job. Job tenure revealed a statistically significant difference in the mean score of polychronicity, indicating that employees who have worked less than 3 years exhibited higher polychronicity than those working more than 3 years in the hotel firms. This suggests that effective training programs should be taken for those employees working more than 3 years in order to promote their polychromic behavior. This study has several practical implications for hospitality practitioners. As results demonstrated, polychronicity plays a critical role in increasing job satisfaction and in reducing employee turnover intention in the hotel industry. Employees with polychromic-orientation are more likely to be satisfied with their job and to stay with their organization because they are comfortable doing several tasks within the same time block. As the hotel work environment becomes more challenging and complex, it is important to recognize the impact of polychronicity on job satisfaction and turnover intention. Therefore, first, the results suggest that human resource managers could increase job satisfaction and reduce employee turnover intention by considering level of polychronicity of the applicants. When hiring new employees, human resource managers might use behavioral interviewing technique that asks candidates to describe what they actually experienced in previous job (Barclay, 2001). For example, when seeking employees who have high level of polychronicity, human resource mangers ask applicants to describe a situation where they actually are engaged in more than two activities at the same time in past jobs. The interviewers can seek whether the candidate has adequate polychronic personality based on past event, and anticipate that such candidate would be likely to be successful at doing switching among multiple tasks in the future. Second, the impact of polychronicity on job satisfaction and turnover intention in the hotel industry does not mean that monochronic-oriented individuals are not necessary for employment in hotels. Bluedorn and Denhardt (1988) and Schein (1992) suggested different work situations in which polychromic/monochromic individuals prefer to working. Therefore, human resource managers should have ability to accurately match each employee to a job that will capitalize on his/her abilities or personality. For example, human resource managers should place polychronic-orientated employees in positions such as the hotel front desk that frequently requires front-line employees to move between tasks. On the other hand, human resource managers should assign monochronic-oriented employees in positions such as the housekeeping department that asks an employee to complete one task before beginning another task. Given that high turnover cost for hotel industry is significantly huge, such placement would be an effective strategy to increase employee job satisfaction and assisting reducing employee turnover in the hotel company.