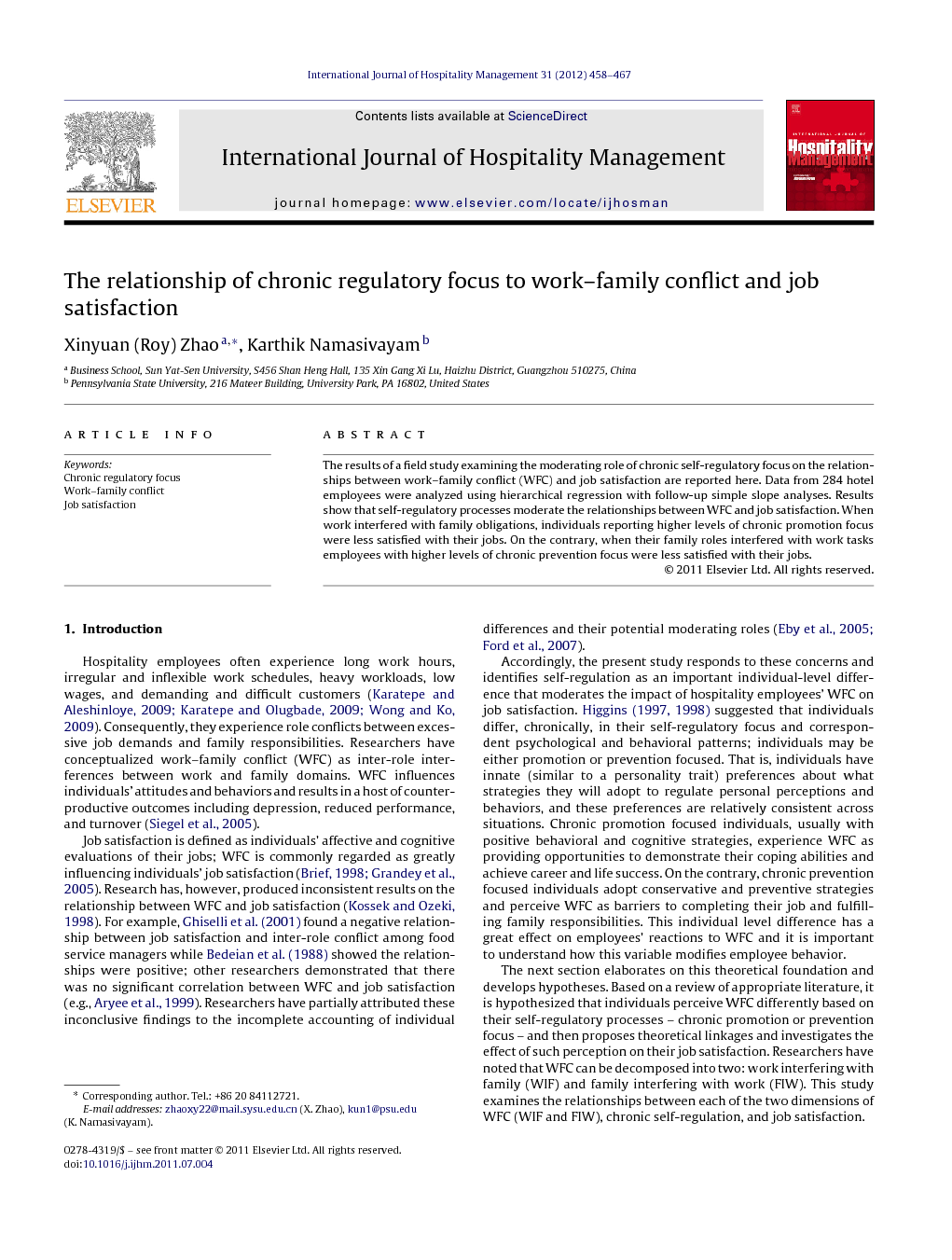 The results of a field study examining the moderating role of chronic self-regulatory focus on the relationships between work–family conflict (WFC) and job satisfaction are reported here. Data from 284 hotel employees were analyzed using hierarchical regression with follow-up simple slope analyses. Results show that self-regulatory processes moderate the relationships between WFC and job satisfaction. When work interfered with family obligations, individuals reporting higher levels of chronic promotion focus were less satisfied with their jobs. On the contrary, when their family roles interfered with work tasks employees with higher levels of chronic prevention focus were less satisfied with their jobs

Hospitality employees often experience long work hours, irregular and inflexible work schedules, heavy workloads, low wages, and demanding and difficult customers (Karatepe and Aleshinloye, 2009, Karatepe and Olugbade, 2009 and Wong and Ko, 2009). Consequently, they experience role conflicts between excessive job demands and family responsibilities. Researchers have conceptualized work–family conflict (WFC) as inter-role interferences between work and family domains. WFC influences individuals’ attitudes and behaviors and results in a host of counter-productive outcomes including depression, reduced performance, and turnover (Siegel et al., 2005). Job satisfaction is defined as individuals’ affective and cognitive evaluations of their jobs; WFC is commonly regarded as greatly influencing individuals’ job satisfaction (Brief, 1998 and Grandey et al., 2005). Research has, however, produced inconsistent results on the relationship between WFC and job satisfaction (Kossek and Ozeki, 1998). For example, Ghiselli et al. (2001) found a negative relationship between job satisfaction and inter-role conflict among food service managers while Bedeian et al. (1988) showed the relationships were positive; other researchers demonstrated that there was no significant correlation between WFC and job satisfaction (e.g., Aryee et al., 1999). Researchers have partially attributed these inconclusive findings to the incomplete accounting of individual differences and their potential moderating roles (Eby et al., 2005 and Ford et al., 2007). Accordingly, the present study responds to these concerns and identifies self-regulation as an important individual-level difference that moderates the impact of hospitality employees’ WFC on job satisfaction. Higgins, 1997 and Higgins, 1998 suggested that individuals differ, chronically, in their self-regulatory focus and correspondent psychological and behavioral patterns; individuals may be either promotion or prevention focused. That is, individuals have innate (similar to a personality trait) preferences about what strategies they will adopt to regulate personal perceptions and behaviors, and these preferences are relatively consistent across situations. Chronic promotion focused individuals, usually with positive behavioral and cognitive strategies, experience WFC as providing opportunities to demonstrate their coping abilities and achieve career and life success. On the contrary, chronic prevention focused individuals adopt conservative and preventive strategies and perceive WFC as barriers to completing their job and fulfilling family responsibilities. This individual level difference has a great effect on employees’ reactions to WFC and it is important to understand how this variable modifies employee behavior. The next section elaborates on this theoretical foundation and develops hypotheses. Based on a review of appropriate literature, it is hypothesized that individuals perceive WFC differently based on their self-regulatory processes – chronic promotion or prevention focus – and then proposes theoretical linkages and investigates the effect of such perception on their job satisfaction. Researchers have noted that WFC can be decomposed into two: work interfering with family (WIF) and family interfering with work (FIW). This study examines the relationships between each of the two dimensions of WFC (WIF and FIW), chronic self-regulation, and job satisfaction.

In this study, the moderating role of chronic regulatory focus in the relationships between WIF/FIW and job satisfaction was investigated; data were collected through a field study. The results demonstrated that each dimension of WFC (i.e., WIF or FIW) together with individuals’ specific chronic regulatory focus (i.e., chronic promotion or prevention focus) modifies the magnitude (i.e., strong or weak) of the relationships between WFC and job satisfaction. Specifically, individuals with high levels of chronic promotion focus are more likely to take interferences from work to family seriously and as a result feel less satisfied with their jobs. In contrast, employees with high chronic prevention focus are more likely to pay greater attention to interferences from family to work and consequently have lower job satisfaction. The results highlighted the potential negative consequences of work–family conflicts and the importance of organizational practices to establish family-friendly work environment not only in western countries but also in an eastern cultural context such as China.