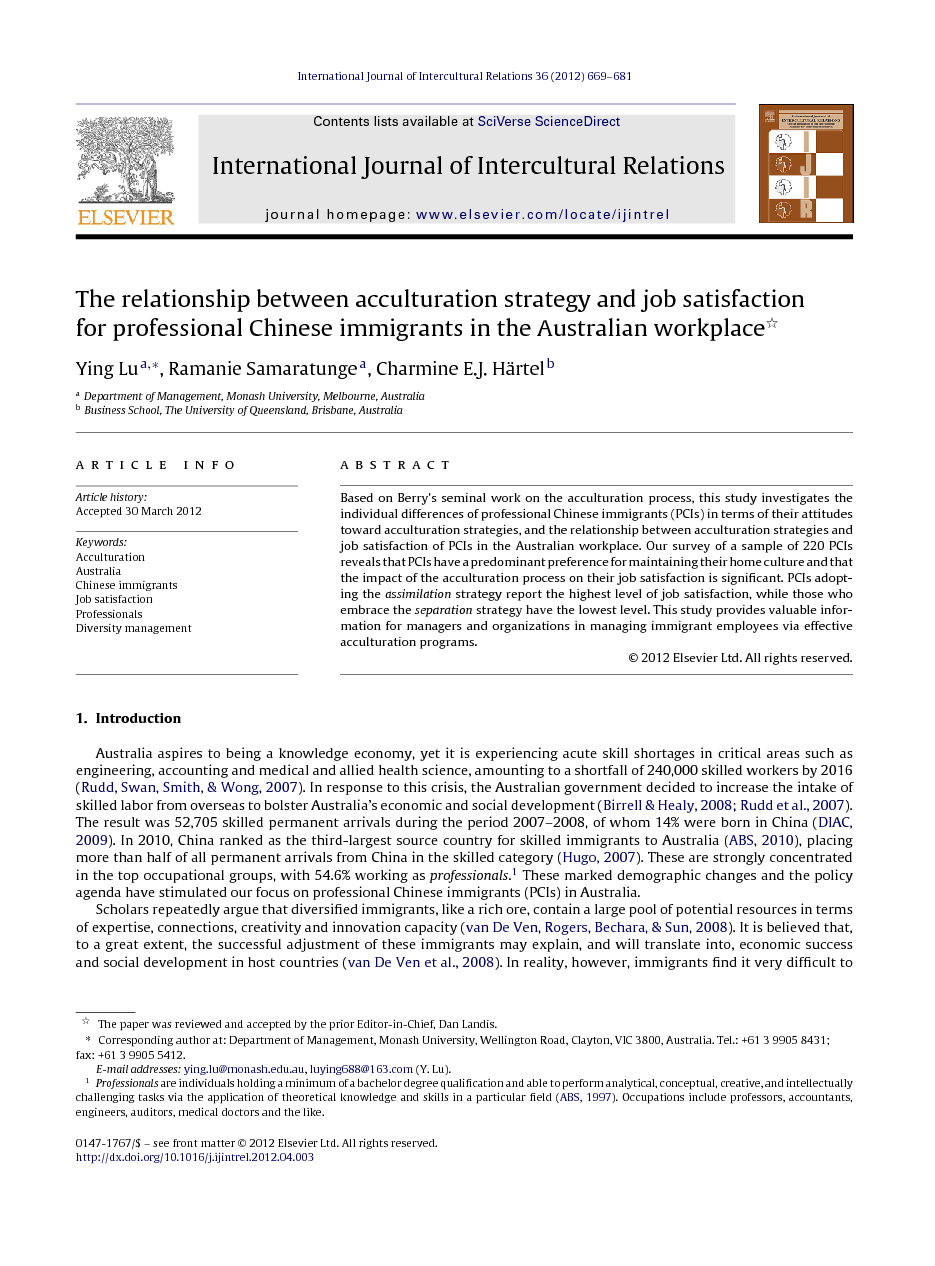 The present research underscores the need for governments and organizations to obtain an accurate picture of immigrant employees’ acculturation strategies. Only with such information can efficient policies and acculturation-related programs be devised to assist immigrants to integrate into the host workplace. Although findings of this study contribute new knowledge to the existing literature, there are several limitations that need to be addressed. One of the main limitations is the generalizability of the results, because this study is not a comparative study between different ethnic groups or PCIs across national contexts. It only focuses on the Chinese group in the Australian context. Therefore the research outcomes cannot explain the case of immigrants from other countries, nor can it reveal the circumstances of Chinese immigrants in countries other than Australia. Likewise, the failure to find a correlation between age at migration and acculturation strategies may be because all the participants were older than 20 when they migrated to Australia. Similarly, the failure to find a relationship between education experience in Australia and previous work-related experience outside China and acculturation strategies may be because all the participants completed at least their undergraduate study in China. It is very likely that their value system, thinking mode and behavior pattern had already been shaped by the Chinese culture before they migrated. This mitigated the effect of education experience in the host country and overseas previous work-related experience. The exclusive focus on PCIs means that the acculturation experiences of other occupational groups were not captured. The focus on the Chinese population also means that the acculturation experiences of other Asian immigrant groups (e.g., Korean, Japanese and Indian) were not captured. Sampling bias is another potential limitation of this study. The present study adopted the RDS sampling method, which can produce asymptotically unbiased estimates compared with other chain-referral methods such as the snowball sampling method (Heckathorn, 1997). Many seed participants of this study work in universities and research institutions, and half were members of particular Chinese associations. Future studies should consider adopting a mix of sampling methods to improve representativeness of the sample in relation to the target population. It is acknowledged that a range of factors could affect both attitudes toward acculturation and job satisfaction, including socio-economic status, social support at work, and the inclusion/exclusion tendency of the majority. These should be systematically investigated in future research (Au et al., 1998, Ea et al., 2008, Härtel, 2004 and Leong, 2001). Furthermore, the research is confined to self-report. Future studies could consider data sources other than self-report instruments (e.g., interviews with respective managers and employees) to assess acculturation strategies (Chirkov, 2009) and cause-and-effect relationships between acculturation strategies and job outcomes. As a final point, there is a need for research incorporating the host society members’ attitudes toward immigrants’ acculturation choices. In that way, insights into how the majority group shapes the acculturation strategies of immigrant groups can be gleaned (Navas et al., 2005). Such information would facilitate the development of more efficient acculturation programs for organizations. It would also be valuable to explore the effect of “fit” of acculturation strategy preference of immigrants and the host society on immigrants’ accommodation into the labor market and their job satisfaction. Longitudinal research is advisable to identify causal relationships and changes in acculturation strategies over time.