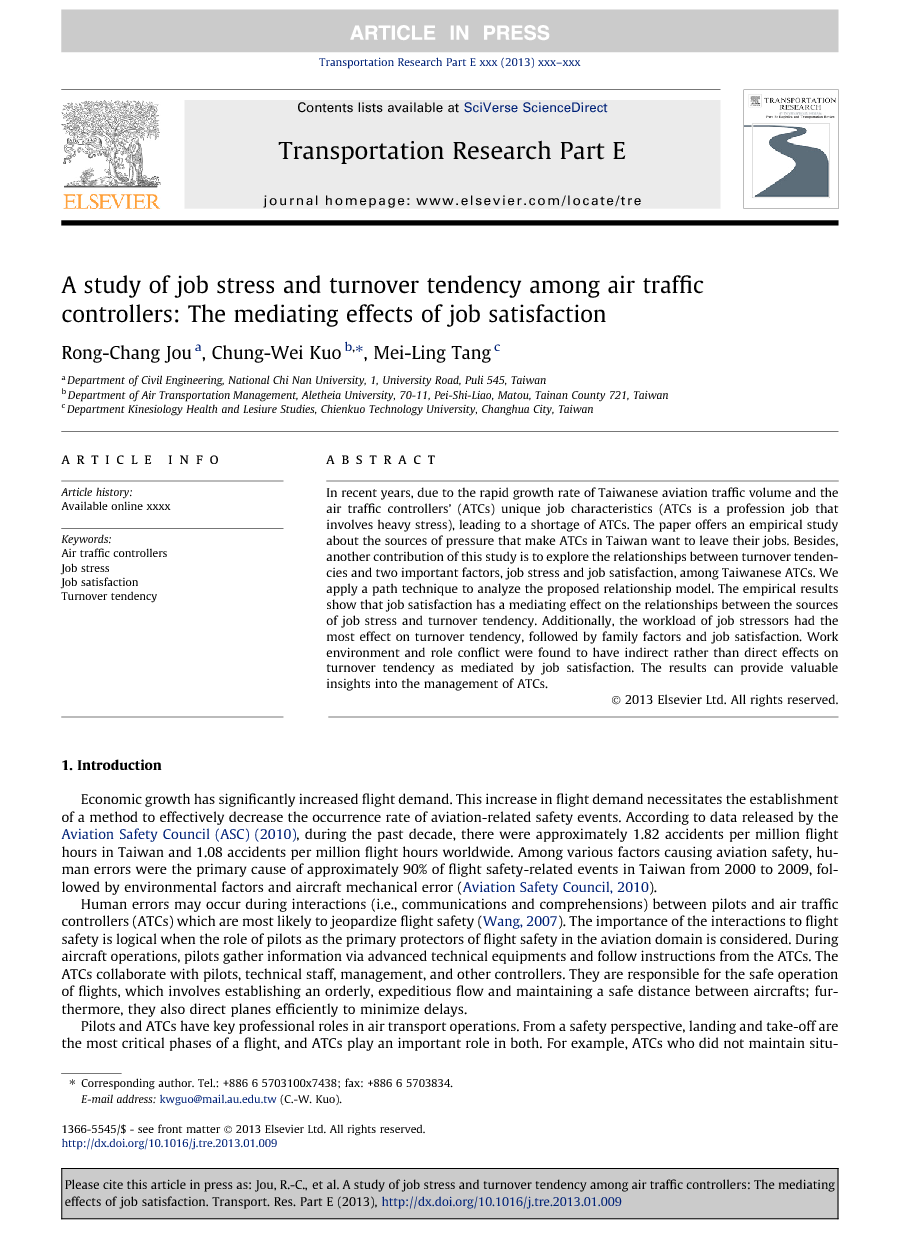 In recent years, due to the rapid growth rate of Taiwanese aviation traffic volume and the air traffic controllers’ (ATCs) unique job characteristics (ATCs is a profession job that involves heavy stress), leading to a shortage of ATCs. The paper offers an empirical study about the sources of pressure that make ATCs in Taiwan want to leave their jobs. Besides, another contribution of this study is to explore the relationships between turnover tendencies and two important factors, job stress and job satisfaction, among Taiwanese ATCs. We apply a path technique to analyze the proposed relationship model. The empirical results show that job satisfaction has a mediating effect on the relationships between the sources of job stress and turnover tendency. Additionally, the workload of job stressors had the most effect on turnover tendency, followed by family factors and job satisfaction. Work environment and role conflict were found to have indirect rather than direct effects on turnover tendency as mediated by job satisfaction. The results can provide valuable insights into the management of ATCs.

Economic growth has significantly increased flight demand. This increase in flight demand necessitates the establishment of a method to effectively decrease the occurrence rate of aviation-related safety events. According to data released by the Aviation Safety Council (ASC) (2010), during the past decade, there were approximately 1.82 accidents per million flight hours in Taiwan and 1.08 accidents per million flight hours worldwide. Among various factors causing aviation safety, human errors were the primary cause of approximately 90% of flight safety-related events in Taiwan from 2000 to 2009, followed by environmental factors and aircraft mechanical error (Aviation Safety Council, 2010). Human errors may occur during interactions (i.e., communications and comprehensions) between pilots and air traffic controllers (ATCs) which are most likely to jeopardize flight safety (Wang, 2007). The importance of the interactions to flight safety is logical when the role of pilots as the primary protectors of flight safety in the aviation domain is considered. During aircraft operations, pilots gather information via advanced technical equipments and follow instructions from the ATCs. The ATCs collaborate with pilots, technical staff, management, and other controllers. They are responsible for the safe operation of flights, which involves establishing an orderly, expeditious flow and maintaining a safe distance between aircrafts; furthermore, they also direct planes efficiently to minimize delays. Pilots and ATCs have key professional roles in air transport operations. From a safety perspective, landing and take-off are the most critical phases of a flight, and ATCs play an important role in both. For example, ATCs who did not maintain situational awareness were the main causes of Taiwan’s aeronautical accidents and incidents during 2010, including approximately 100 go-around incidents and 14 mistakes caused by ATCs which fortunately did not lead to any major flight accidents. The most recent ATC related event occurred on July 15, 2010. At Taiwan Taoyuan International Airport, 2 flights avoided collision by only 11 s. This collision almost occurred despite the presence of the technologically advanced safety software Multilateration (also named MLAT). The near-accident described above exemplifies the consequences of inadequate experience and poor situational awareness among Taiwanese ATCs (Jiang, 2011). As mentioned previously, human errors were the most common causes of flight-related safety events. Thus, the current study closely examined human errors. ATCs’ special work requirements1 can cause controllers to feel fatigue from circadian imbalances and insufficient sleep. Fatigue causes safety incidents, impairs an ATC’s capabilities, and increases the difficulty of ensuring aviation safety. As an issue, fatigue is fraught with complexity for ATCs because it affects both the ATCs’ general job requirements (i.e., maintaining their significant responsibility for the safety of aircrafts and their passengers) and performance expectations (i.e., total concentration is required to keep track of several planes at the same time and to make certain that all pilots receive correct instructions). Additionally, due to the ATCs’ job characteristics, they make decisions that are pressured by time. The stress of making multiple safety decisions in quick succession causes ATCs to become fatigued. In addition to time constraints, ATCs experience intensive work schedules and isolated working spaces. The workplaces stressors described above cause both physical and mental stress for ATCs. Hence, according to the above statement, the fatigue and pressure caused by high levels of workplace stress negatively affect ATCs’ professional capabilities, responsiveness, and vigilance. The Taiwanese Civil Aeronautics Administration (CAA) is the authority for air traffic control in aviation safety. In 2010, the Taiwanese CAA regularly mailed surveys to ATCs to investigate their work performance. Over 82% of participants were dissatisfied with their salary and benefits. Due to the precarious situation of Taiwanese ATC employees, caused by the manpower shortage issue2 and the long duty time, approximately 78% of participants complained about their heavier workload. Furthermore, approximately 55% of participants complained about the work environment (e.g., the limited space and the aeronautical equipment). The responses above could raise the possibility of ATC turnover intention. The ATC profession is notoriously stressful due to the characteristics of the job experience and the extensive responsibilities shouldered by ATCs. Stress is a particular problem in Taiwan due to the shortage of ATC personnel and the rapid growth rate of Taiwanese aviation traffic volume. Previous studies (Hersey and Blanchard, 1988, Gaither et al., 2008, Jones et al., 2007, Ortqvist and Wincent, 2006 and Chen and Silverthorne, 2008) have indicated that job stress is the most significant determinant of both job satisfaction and the intention to quit. However, the studies indicated above were based on the service industry in general. Few studies were specifically focused on the fields of air transportation and air safety, especially in regards to ATCs. Hence, this study is designed to establish the relationships among job stress, job satisfaction and turnover tendency in ATCs. Besides, types of stressors contributed to the occurrence of job stress among ATCs in the air traffic control system are also investigated. The Taiwanese aviation sector is selected as the research setting. The empirical results can provide a better understanding of both the overall relationships between job stress and turnover tendency among ATCs and the mediating effect of job satisfaction on the relationship between job stress and turnover tendency. The structure of this paper is organized as follows. Section 2 presents the model framework proposed by this study. Section 3 introduces the methodology. Estimation results are included in Section 4. Conclusions and recommendations are summarized in the last section.

In Taiwan, the manpower of ATCs is insufficient, and as a result, job stress and workload of ATCs are significantly heavier. This study constructed a comprehensive model to explore the relationships among job stress (divided into five components: workload, interpersonal intention, work environment, role conflict and family factor), job satisfaction and turnover tendency. Furthermore, the mediating effect of job satisfaction on the relationship between job stress and turnover tendency was also explored. Our analysis revealed the significant predictive power of job satisfaction on turnover tendency. The path analysis indicated that the tendency to quit the job was reduced by enhancements in job satisfaction, reduction in workload to an acceptable level and the presence of a supportive attitude by family members. Among the three factors noted above, workload had the most effect on turnover tendency, followed by family factors and job satisfaction. Workload influenced turnover tendency into two ways, directly and indirectly. The indirectly influence is defined as work load → job satisfaction → turnover intention. This finding is consistent with that of Coomber and Barriball (2007). Workload not only influenced ATCs’ turnover tendency but also influenced conditions regarding job satisfaction. The ATCs’ already heavy workload is affected by the dramatically increasing volume of air traffic demands. As more arrivals and departures are scheduled by the airlines, the ATCs perform more physical (i.e., visual memory abilities) and psychological (i.e., capabilities to make quick and assertive decisions and situation awareness within the assigned airspace) assessments. Heavy workload is a particular concern in Taiwan because insufficient manpower leads to overtime and a long workweek (55–65 h) compared with the workweek length in Western countries (30–70 h). There are several possibilities for reducing the heavy workload experienced by Taiwanese ATCs. First, government and related institutions should match the shift schedule to reflect the increased need for personnel. The heavy workload currently experienced by ATCs causes fatigue. The effects of fatigue can be mitigated by implementing new employee educational systems. For example, professional retraining courses can provide the opportunity for ATCs to pool their knowledge and experience in how to handle increased workloads. In addition, a counseling system would allow ATCs to express their frustrations and/or discontent. Family support also had an effect on turnover tendency. It is possible that rotating work shifts cause incompatibilities between work and family demands, roles, and responsibilities and that these incompatibilities result in conflicts and strain. Given the important effects of relationships on workers’ well-being, flexible schedules that allow employees to balance work and family demands can improve ATCs’ capacity to handle heavy workloads. Work environment and role conflict were found to have indirect rather than direct effects on turnover tendency as mediated by job satisfaction. That is, work environment and role conflict did not predict ATCs’ turnover tendency; job satisfaction completely mediated the relationship between the predictors of work environment and role conflict and turnover tendency. The working environment can be improved by providing ATCs with quality lighting and fitness equipment and by improving the ergonomics of consoles, screens and chairs. By allowing ATCs to work more comfortably, the suggested improvements will increase job satisfaction among ATCs and decrease their turnover tendency. In addition to physical workplace improvements, a decrease in role conflict (e.g., increasing support from supervisors and cultivating supportive attitudes among colleagues) can increase job satisfaction. Although job satisfaction significantly mediates the relationship between job pressure and turnover tendency, addressing job satisfaction among ATCs requires addressing the multiple factors that are characteristic of the ATC profession: complex tasks with strict proficiency requirements, a heavy workload and high job stress. Furthermore, promotion is limited for ATCs. Therefore, reasonable promotions, flexible transferring opportunities and alternative incentives (i.e., salary and bonus improvements) can directly lead to high job satisfaction. In addition, high-performing ATCs can also receive training abroad, both as a supplement to their current training and as a reward for high performance. Finally, different ATCs (approach, area, and tower) face different working environments and may have different job stressors. This heterogeneity which has not been taken into account in this experiment can be investigated in the future.