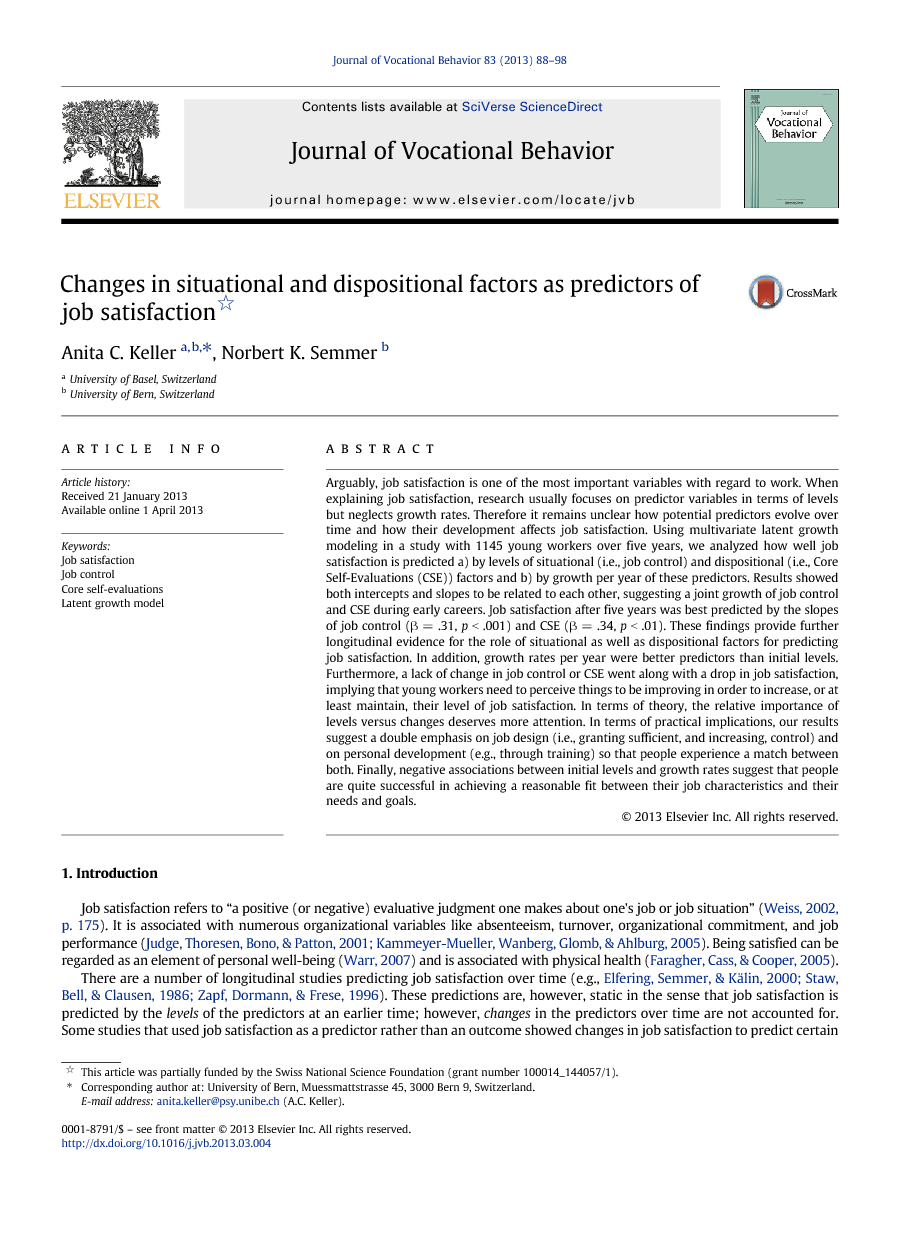 Arguably, job satisfaction is one of the most important variables with regard to work. When explaining job satisfaction, research usually focuses on predictor variables in terms of levels but neglects growth rates. Therefore it remains unclear how potential predictors evolve over time and how their development affects job satisfaction. Using multivariate latent growth modeling in a study with 1145 young workers over five years, we analyzed how well job satisfaction is predicted a) by levels of situational (i.e., job control) and dispositional (i.e., Core Self-Evaluations (CSE)) factors and b) by growth per year of these predictors. Results showed both intercepts and slopes to be related to each other, suggesting a joint growth of job control and CSE during early careers. Job satisfaction after five years was best predicted by the slopes of job control (β = .31, p < .001) and CSE (β = .34, p < .01). These findings provide further longitudinal evidence for the role of situational as well as dispositional factors for predicting job satisfaction. In addition, growth rates per year were better predictors than initial levels. Furthermore, a lack of change in job control or CSE went along with a drop in job satisfaction, implying that young workers need to perceive things to be improving in order to increase, or at least maintain, their level of job satisfaction. In terms of theory, the relative importance of levels versus changes deserves more attention. In terms of practical implications, our results suggest a double emphasis on job design (i.e., granting sufficient, and increasing, control) and on personal development (e.g., through training) so that people experience a match between both. Finally, negative associations between initial levels and growth rates suggest that people are quite successful in achieving a reasonable fit between their job characteristics and their needs and goals.

It is well established that job satisfaction is related to CSE (Judge et al., 2008 and Srivastava et al., 2010) and to control (Humphrey et al., 2007). Our results suggest that change in these variables not only predicts job satisfaction over and beyond initial levels; it also seems to be more important as predictor than initial level. But the implications of our results go beyond emphasizing the relative importance of change, suggesting that change is a prerequisite for improving, or at least maintaining, one's initial level of satisfaction. Given that we know rather little about questions such as “Is a given level of control worth less if it has not improved during a certain period?”, our study adds to the existing knowledge about the role of change versus level. Such questions, and the related issue of changing aspirations as people gain experience should receive more attention in future research and theory. As is often the case in latent growth analyses (cf. Chan and Schmitt, 2000 and Salmela-Aro and Nurmi, 2007), we found a negative association between the initial level and the growth rate per year for both, job control and CSE. These results point to a certain degree of “harmonization”, in that differences between people become smaller. While these effects likely reflect regression to the mean, a substantive interpretation also suggests itself. Changing the job environment, and personal development, for instance by learning, are mechanisms that help people to achieve a fit between their needs and goals and their work environment. In terms of practical implications, our results not only support the widely accepted notion that granting control to employees is likely to have positive effects on job satisfaction. They also suggest that granting control initially may not suffice over time; rather, as employees gain experience, an increase in autonomy seems warranted; such an increase seems necessary not only to further increase their job satisfaction, but actually to prevent job satisfaction from declining. At the same time, the concomitant increase in CSE is important, and it may be a prerequisite for these positive effects. Control may turn into a stressor if people do not have the personal resources needed to deal with the challenge posed by control, for instance in terms of self-efficacy (Meier et al., 2008 and Schaubroeck and Merrit, 1997); an emphasis is therefore needed on granting control but at the same time supporting employees in developing the personal resources needed to effectively use that control (cf. Cohrs et al., 2006). If that can be done effectively, job satisfaction is likely to be high, with all positive implications that have been found for individuals as well as organizations.